I don’t know if you noticed, but the Popeyes Calgary opened recently, and people went bananas over it across the social media. Before Popeyes even opened up actually, for weeks if not months people kept asking when it was happening like it was a desperately needed new hospital. Wellsir, I recently found myself in Forest Lawn for some reason or another and noticed that Popeyes Calgary had opened up on 17th ave SE, where the old Taco Bell used to be. Without anywhere to be, I randomly dropped in to check it out.

Never having tried Popeyes chicken before, I wasn’t entirely sure what to expect, other than it would be spicy, and wouldn’t be anywhere close to being healthy. That is fine by me, I’m not one to shy away from calories. What doesn’t kill you just makes you stronger, right? 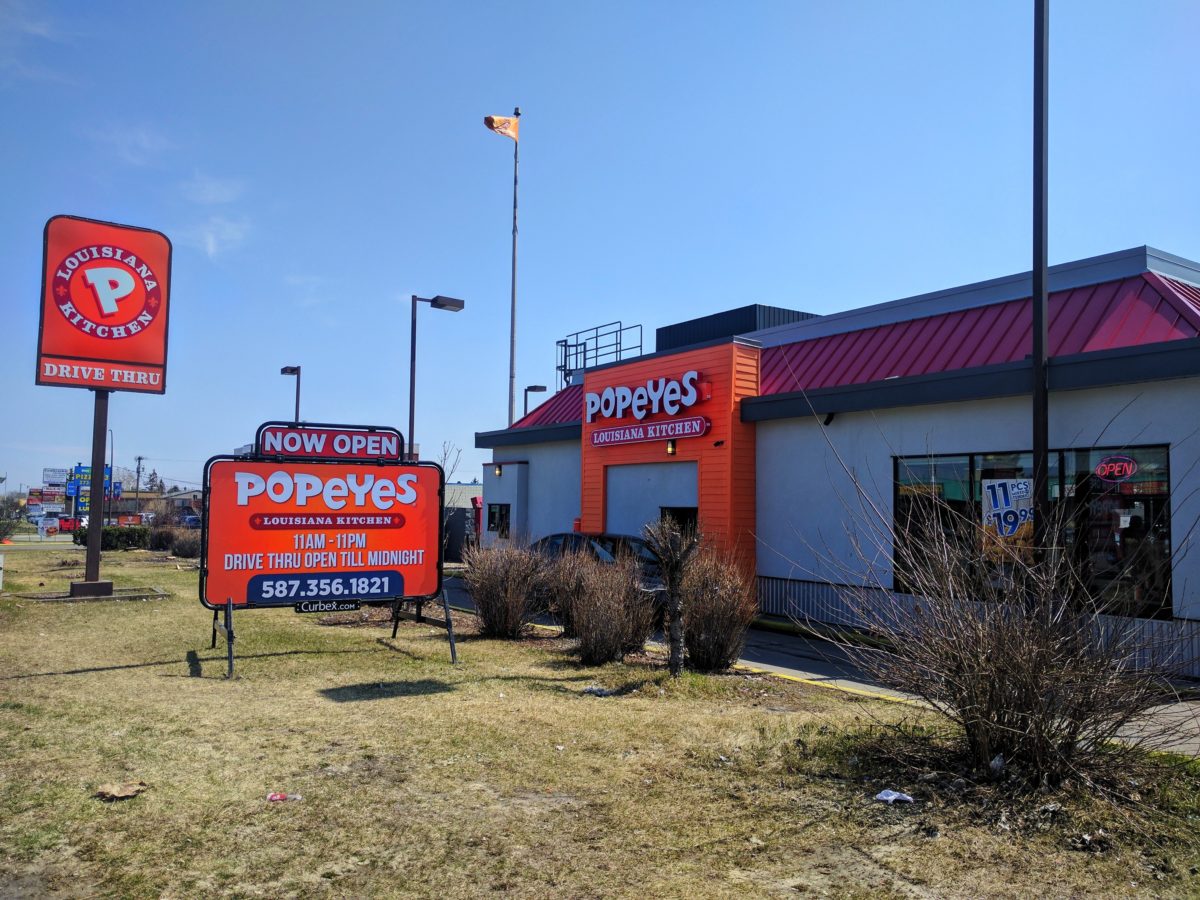 The inside of the 17th ave SE flavour of Popeyes Chicken Calgary looked pretty similar to how it used to look when it was Taco Bell, perhaps a little smaller. The big “Louisiana Kitchen” silver ring in the ceiling was kind of cramped and looked out of place. Almost all of the seats were taken, and it was pretty busy, but they kept the line moving quickly. The staff were very pleasant and almost seemed robotic in their questions and answers. I didn’t use the washrooms but I’m sure they were nice, being Forest Lawn and all. 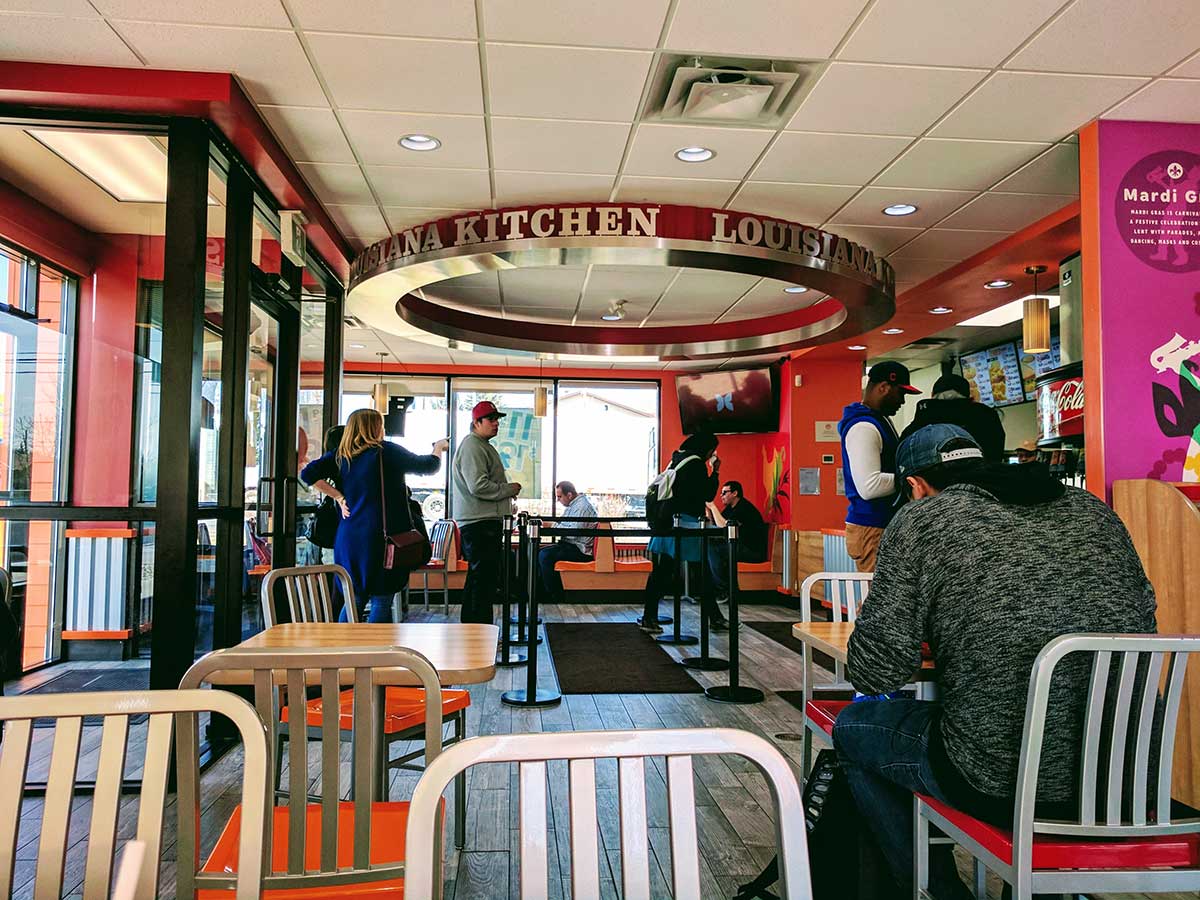 The spicy tenders meal included 3x chicken tenders, fries, a biscuit and a fountain drink. I think it was $8.99. A little on the pricey side for this size of a fast food meal, but, this is Popeyes Chicken Calgary we’re talking about. Remember the hype?! You also get to pick one of their dips with the meal, I went for buffalo sauce, but there was like a dozen to choose from. 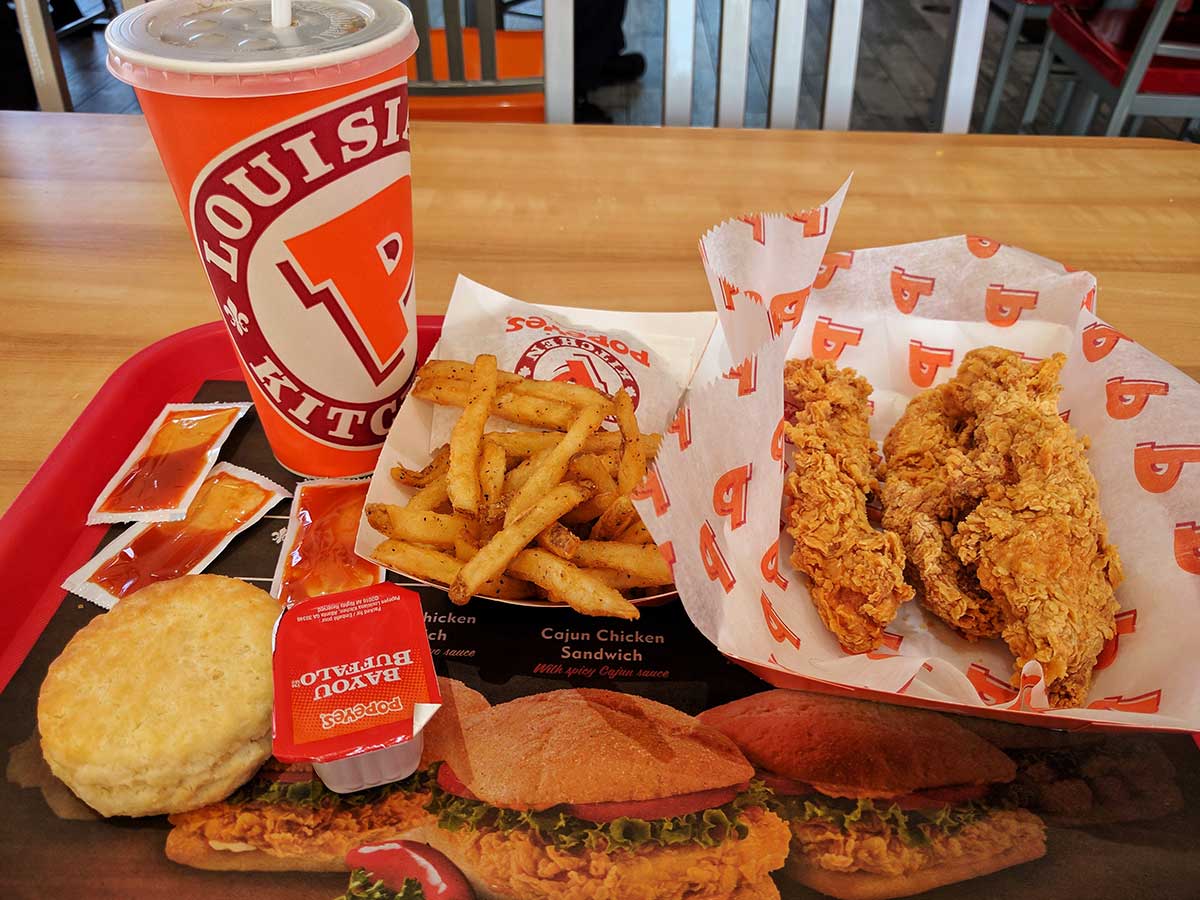 The chicken was crunchy but not all that spicy. Actually, it was very crunchy. Glad I grabbed extra hot sauce, in addition to the buffalo sauce. The actual chicken inside the chicken tenders was pretty good, warm and juicy, but kind of small. A lot of the weight of these things was the heavy coating of batter. I’m not complaining, I love me some crunchy fried batter. Would have liked to get 4x tenders for the price and their size, but oh well. Wish they had more of a spice kick to them. Given the Popeyes Chicken Calgary hype, I was expecting to have a hard time eating them. Maybe Louisiana food just isn’t as spicy as I was expecting.

Everything was just a little greasy. 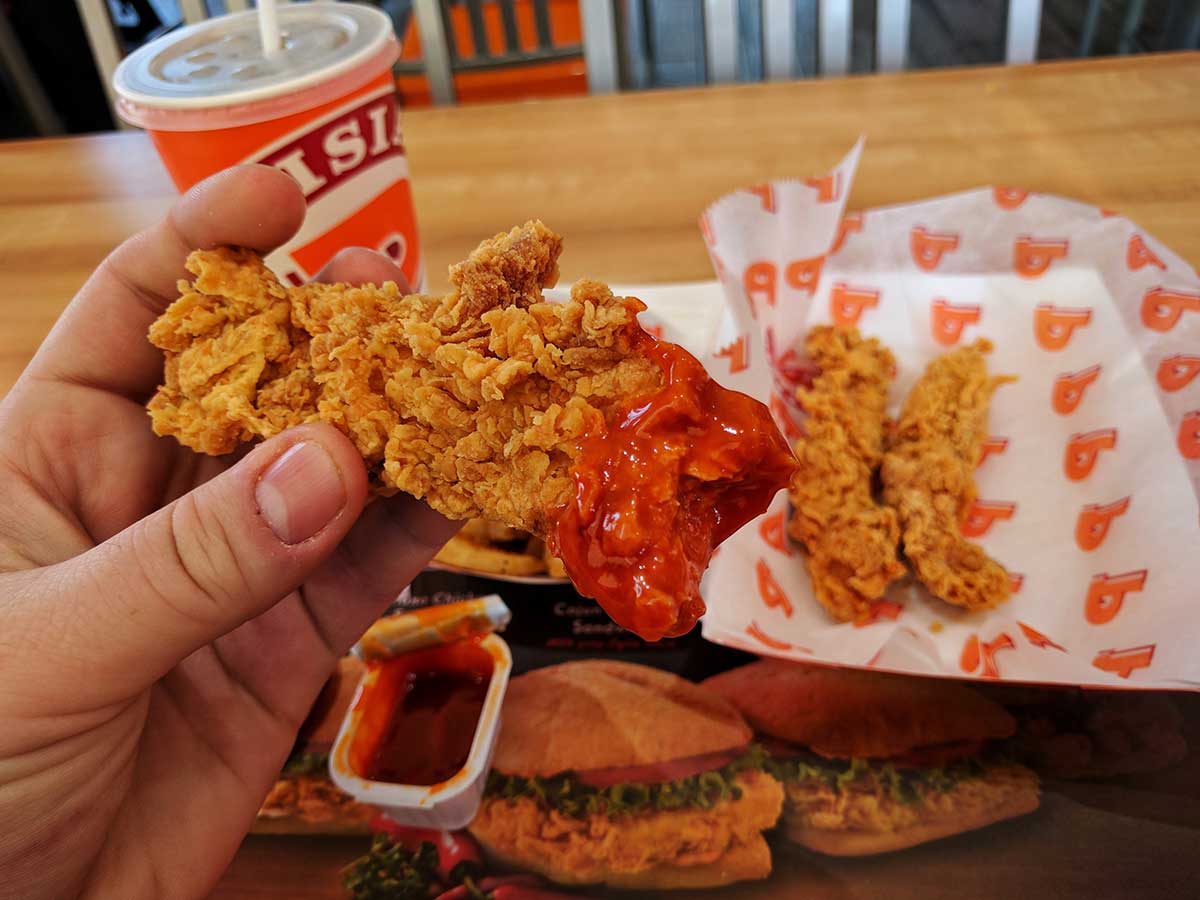 The biscuits that come with the meal.. are REALLY GOOD! I was really surprised. It looked pretty dry and crappy, but no sir, it was moist and buttery and I really liked it. Wish I had grabbed more of them. Props to Popeyes on their biscuits. I want these in my life all the time.

The ‘cajun’ fries were pretty bland, despite looking like they were going to have a kick to them. They kind of seemed… old? Like they had been sitting under a heat lamp for a while. Maybe I just got a poor sample of the greatness they can be. Dunno. They went well with the buffalo sauce. Hindsight is 20/20 as they say, but I think I should have tried them with the gravy. Also the mashed potatoes. Kind of wary about mashed potatoes from a fast food restaurant, but apparently it’s one of Popeyes best offerings? I wasn’t really in the mood for mashed potatoes during this visit. Next time maybe.

If I had to give it a rating on a scale of 1 to 10 (10 being best), for a fried chicken fast food joint, I’d go with a 6/10. Worth trying I think, not because of the hype, but it’s something a little different than the typical McChickens of the world. Worth taking a bus across the city for? No way. If you just happen to be near Popeyes though, drop by and give it a try.

Will I try Popeyes Chicken again? Yeah sure. It wasn’t horrible, just didn’t quite live up to the hype, in my opinion.

4 thoughts on “I Finally had Popeyes Chicken in Calgary! My review.”