My Review: Using Shaw Cable in Calgary for Internet

Have you ever used the internet? It’s pretty awesome – I give it a 11/10. I use Shaw cable in Calgary for mine, and it’s pretty decent! With no TV package of course, I cut that cord back in 2015 and have never looked back. Shaw is one of two major ISPs (Internet service providers) here in Calgary, so I thought it might be helpful to write a review of their services, if anyone is interested. Shaw cable has been my internet provider for a very long time, but they aren’t immune from criticism.

Note: I’ve only ever used Shaw for highspeed internet in Calgary, so while I’m really experienced with them, I don’t know a damn thing about the other home internet options here in Calgary.

My History with Shaw

I made the switch from 3web/CIA dialup to Shaw cable in Calgary wayyy back in the early 2000’s. I’ve been with them through thick and thin, through every imaginable technical problem you could think of, plus I even ended up working for them for over 7 years. I used to subscribe to cable TV and phone through Shaw as well, but times have changed and cable TV is way too expensive (and commercials suck). Haven’t used a landline in years so I got rid of that a while back too. Currently with Koodo for cell service, love them.

Shaw laid me off in 2015 when they introduced shomi, which sort of replaced my job. While I really loved my time working for Shaw (for the most part), I owe them no loyalty, since they freaking laid me off. If one of the other providers offered the same quality of service for a lower price, I’d be interested in checking them out. But! I do still enjoy and happily use Shaw’s internet service.

These days I mostly use Shaw for:

I know everyone hates customer service people, and especially if they’re in a call center, but the Shaw customer service is actually pretty decent. There have been times where their customer service has completely failed me, but it’s typically because of poorly trained agents. There are some really great tech agents out there who only want to solve your issue as soon as they can, so give them some slack! I used to do the job myself and it’s pretty stressful. The call center is available 24/7/365 (for tech support, not for customer service issues like billing etc) and the wait time isn’t too bad to get through, unless there’s a major issue affecting a large area.

I currently subscribe to the Shaw 150 Internet package, which I find is more than enough to fill my boots. Shaw actually offers unlimited internet now, so I see no reason to upgrade at this time. They do offer an even better 300/20  package (also unlimited throughput) if you need it. Prices vary and sales come/go, so I’m not going to quote a price for it.

There’s never usually an issue hitting this speed, even during peak times. Below are some speed tests with some of their dates and times included. Note: I live in a large apartment building and must share my local Shaw node with many many thousands of people.

Most of these speedtests are powered by Ookla (a website that does speedtests) but the servers are in different locations, so speeds will vary. 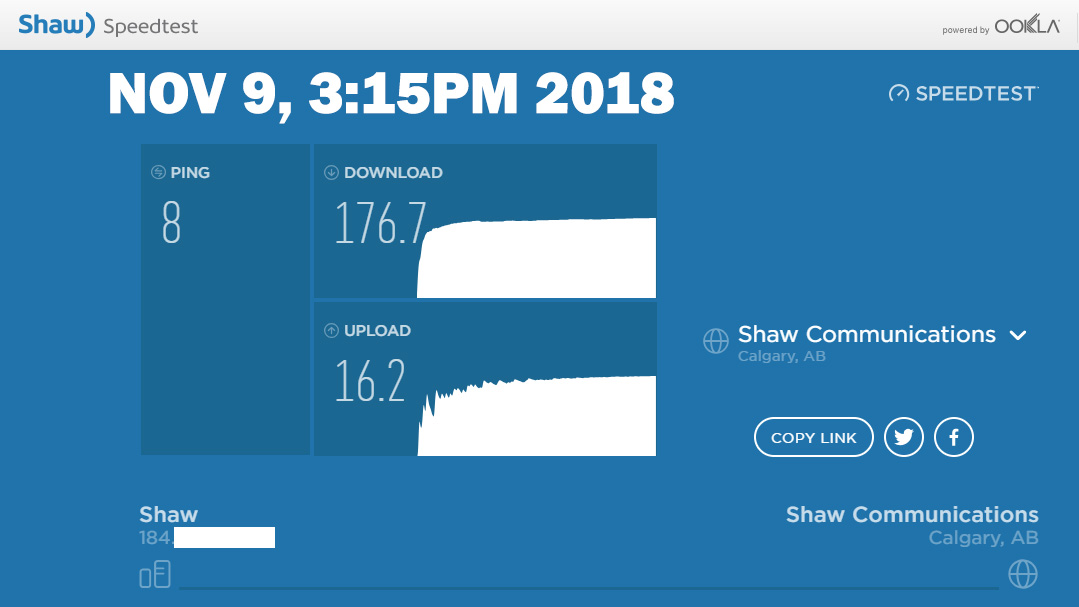 From Shaws own speedtest site. It’s pretty fast for sure, but honestly using a speedtest hosted by the same ISP I’m using is kind of dumb. That’s not a realistic picture of where I’ll be connecting to online. 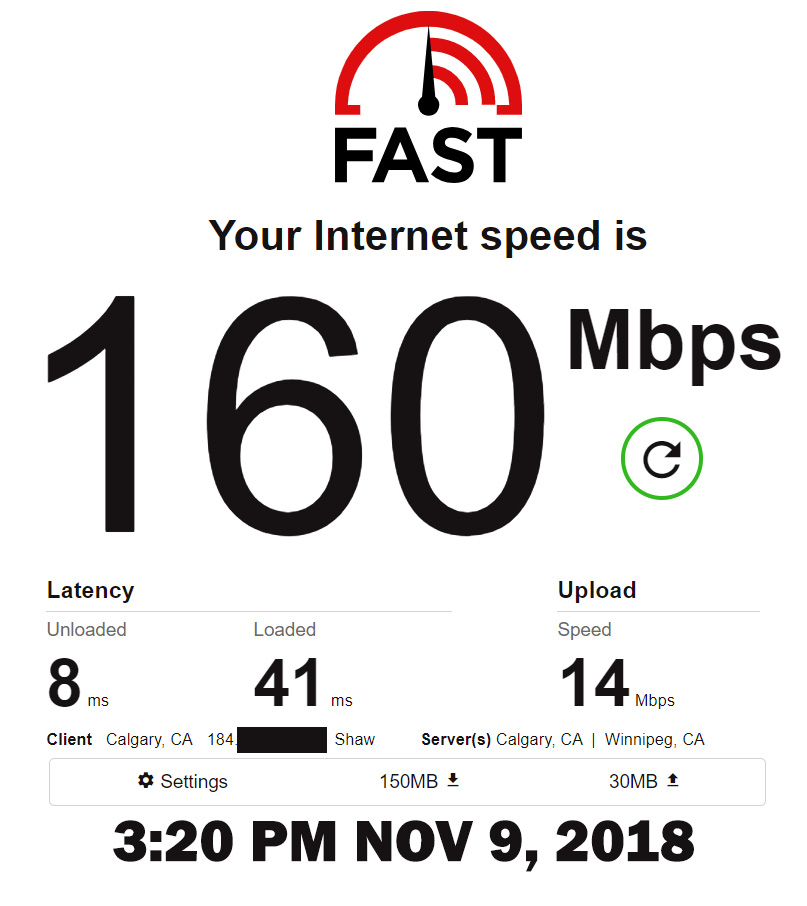 Fast.com which is owned by Netflix shows some pretty decent speeds coming out of Winnipeg.

From Speedtest.net using one of Telus’s Calgary servers. Pretty decent.

Traveling down to the United States, here’s an Xfinity speedtest. Results out of Seattle. 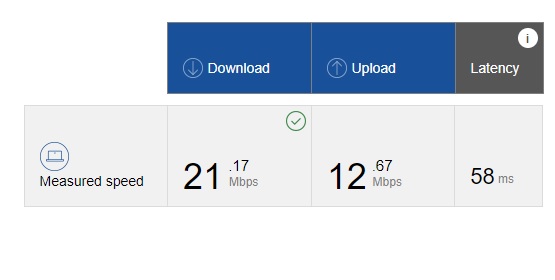 Bell’s speedtest was less than stellar. It doesn’t say where the server is or any other metrics. 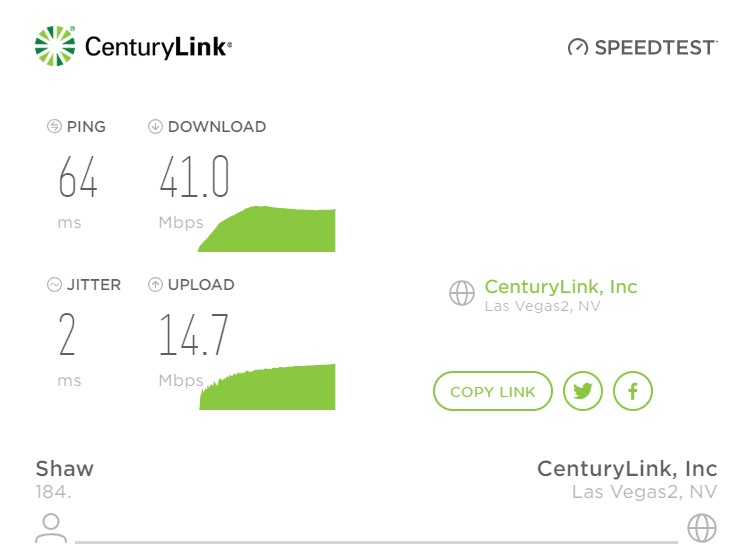 A Century Link speedtest out of the US, from Vegas. Not amazing but usable.

ATT&T speedtest also from the US, though I’m not sure where the server was located.

Shaw internet customers get access to their Shaw Go WiFi network, which is like having your home network with you all over the place. All throughout Calgary (and other places in Canada) businesses have installed these Shaw WiFi routers that give you access to the internet so you don’t have to use your cell phone data. This is a huge plus for me as I’m always out and about uploading photos and videos to social media land. Shaw cable in Calgary has done a good job of saturating the city with these things, so WiFi is never usually too far, unless you’re out in the middle of a suburb or something. Also you’ll connect automatically without needing to sign in or anything (it’s based off MAC addresses).

How fast is Shaw Go WiFi? It depends which Shaw package you subscribe to. 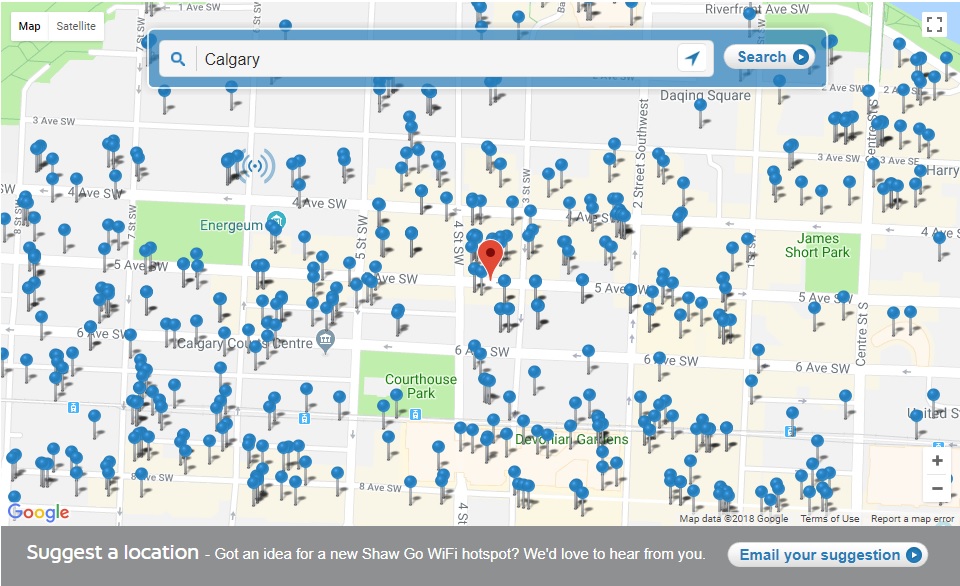 They have a tool on their website and even mobile apps to locate the Shaw Go WiFi hotspots, but honestly they’re so numerous that you don’t really need to bother. With my Shaw 150 package I can add up to 10 devices to my account that get access to the hotspots.

Some of the downsides to Shaw Go WiFi

I’m quite happy with Shaw cable in Calgary for my internet. It doesn’t go down very often, and when it does, it’s brief and at like 4am. I’ve never had any billing issues. They have retail outlets in several locations throughout Calgary, they’re very accessible and my internet is fast. They also don’t phone and bug the shit out of me to buy their other products, which I love.

Something I’d like to see? Existing customers be eligible to take advantage of new offers and promotions. Other companies can do that (shout out to Public Mobile!), why can’t Shaw?

Do you need a massage? Check out Massago. They come to you!

2 thoughts on “My Review: Using Shaw Cable in Calgary for Internet”