The Calgary Stampede SuperPass is back for 2019 and we’ve got 6x of them to give away! If you aren’t familiar, a SuperPass is an e-ticket that is valid every day for gate admission to the Calgary Stampede from July 4-14, 2019 during normal hours. How does it work? You simply scan the bar code on your phone from your SuperPass to enter; voila you’re in and now have access to all sorts of free things you can do. If you want to buy one, they’re $39 + GST.

The giveaway will end on July 3rd 2019. We’ll contact the winners to collect your name and e-mail info which we’ll send to the Calgary Stampede. They’ll issue you the SuperPasses.

Free Things At The Calgary Stampede

Things included with gate admission, so not technically free, but you know what I mean. Free once you’re in! If you have any suggestions not listed here, drop them in at the bottom in a comment.

Loved seeing/hearing them play the Coke stage, back in 2015.

Lots of dogs doing all kinds of crazy stunts, tricks, catching things and even freestyle dancing as the Stampede Showband Alumni perform. Multiple shows every day during Stampede. All of the showtimes are available on the Calgary Stampede website.

Explore The Barns In The Agriculture Building

Either by yourself or with a guide, touring the barns and animal pens is something everyone should do. Kids especially love it because a lot of it is hands on. You can watch sheep sheering competitions, watch miniature donkeys do whatever they do, milk a cow, all sorts of farmy stuff. Good education experience as well as fun to do (plus it gets you out of the sun for a bit). 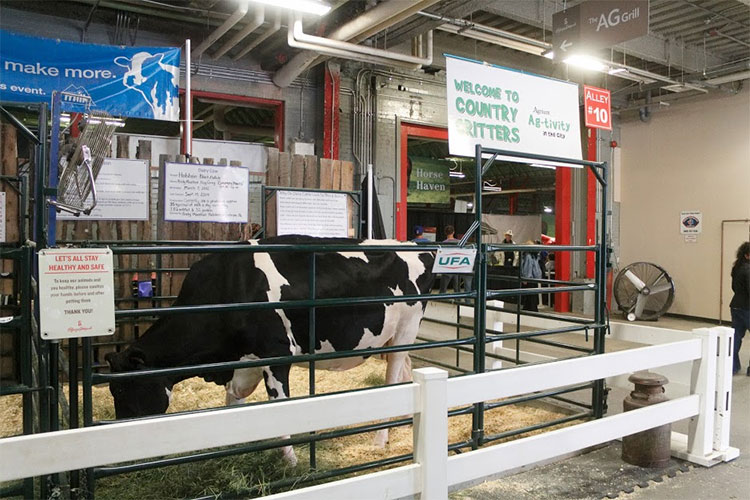 There’s a ton of things to do in the Agriculture Zone. The Blacksmith Showcase is always fun to watch. 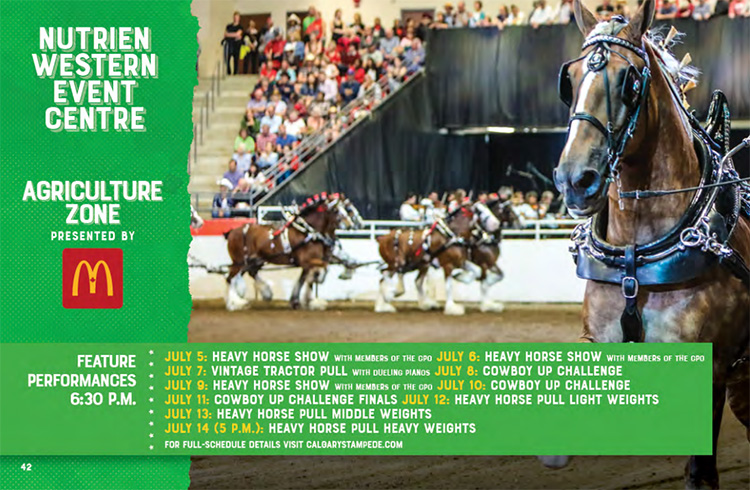 In the middle of the grounds is this giant Motocross arena called the Monster Energy Compound, you can’t miss seeing (or hearing) it. Several really talented Motocross athletes do flips and jumps and tricks and it’s really entertaining (especially for kids). All of the showtimes are available on the Calgary Stampede website. Note: it’s outdoors and uncovered so you’ll be sitting in the sun, or rain. Bring an umbrella if needed!

On Monday, July 8th, Coca-Cola IgNITES the Night at the Calgary Stampede! Be a part of the party with hot music, bright lights and adrenaline – now later than ever before. Guests can ride the midway until 1 a.m. – experience an incredible music lineup at the Coca-Cola Stage and The Big Four Roadhouse – plus witness an unbelievable one-day-only tightrope stunt by Nik Wallenda. It’s one exclusive evening of events happening every hour all night long!

The music lineup will be on fire with performances by CLASSIFIED at The Big Four Roadhouse, T-Pain and artist Lil’ Berete on the Coca-Cola Stage; and the music won’t stop there as 4KORNERS, the official DJ of the Toronto Raptors, will be spinning high energy beats and pumping up the party on the Midway all night long!

Only at IgNITE will Nik Wallenda attempt to break his personal record for the longest unsupported urban high wire walk. Wallenda will walk a total distance of 1703 ft. (519 meters) from the Kid’s Midway to the Rotary House. Spectators will have the chance to watch from various points along the Midway; a once in a life-time sight to see up close and personal.

.To each their own. You know who loved it? This guy… @mikesbloggity pic.twitter.com/X4fRnhfaFM

DUNDU – The Giants of Light

An illuminated large-scale puppet show. It’s only happening between July 10th and 14th, don’t miss it.

Chill Out In The Western Oasis

Somewhat of a hidden gem at the Stampede, the Western Oasis is dark, cool, quiet and full of artwork you can check out. There’s a bar in the middle for wine and beers if that’s your thing too. It’s inside the BMO centre, halls D and E.

The food and beer and wine ain’t free of course, but you can totally go inside to have a seat and relax. They’ve also got Whisky. I would recommend buying something from their local craft beer menu because local craft beer is good stuff. Totally my jam. They also have several classic fun over-sized board games and stuff you can play for free. Connect Four, Air Hockey, Ping Pong, Shuffle Board, etc.

There is all sorts of free things to do for kids at the Calgary Stampede, they really do a great job of helping keep them entertained. My buddy Dave is the biggest fan of Paw Patrol so he’s going to be thrilled when he sees this. Free face painting! 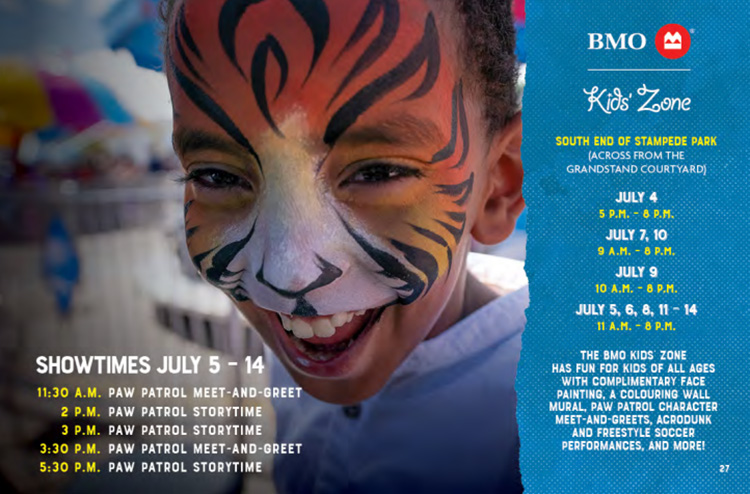 Elbow River Camp has been a major part of the Calgary Stampede since the inception in 1912. It’s a great way for visitors to experience the traditions and culture of First Nations peoples from the Treaty 7 nations of Siksika, Piikani, Kainai, Stoney Nakoda, and Tsuut’ina firsthand.

Taking over the Scotiabank Saddledome, this headline event features marching bands from across the globe. Each competitive group brings their unique international style and culture to the activity. Come watch as these groups compete to win the World Association of Marching Showbands World Championship Flag! There’s also a drumline battle and a parade competition.

You can also catch the Stampede Showband playing on the steps in front of the Saddledome throughout the day.

Light Balance is a hi-tech neon and LED show with elements of acrobatic and dance choreography. When the lights go out, you are left alone with yourself, armed only by imagination. The atmosphere of magic, light, dance and music gets into you; makes you believe in what is happening on a stage. The colorful images of a neon world remain in mind for a long time. This is Light Balance; a team of talented young dancers, designers, programmers, and choreographers. 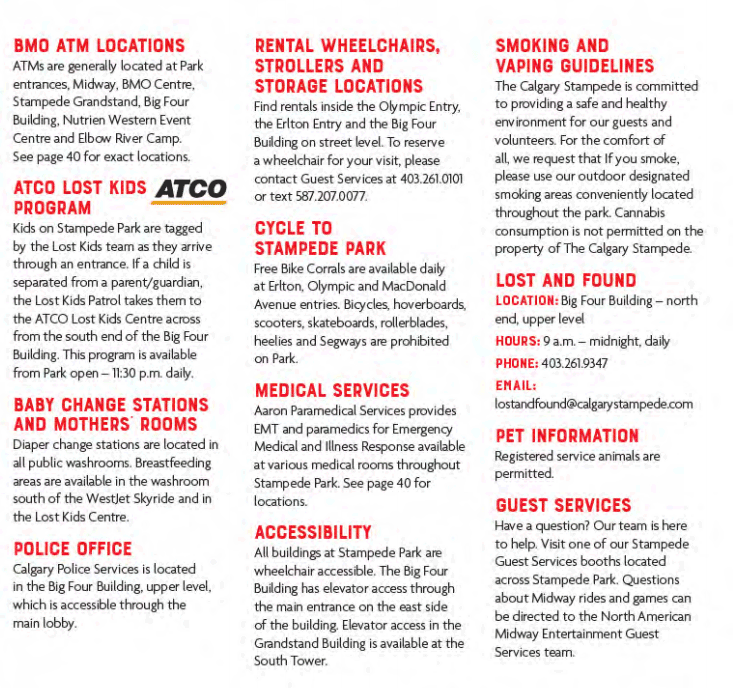 Here’s Some Cowboy Hats For Your Dogs

Goodluck! We hope you have a rad Calgary Stampede adventure. 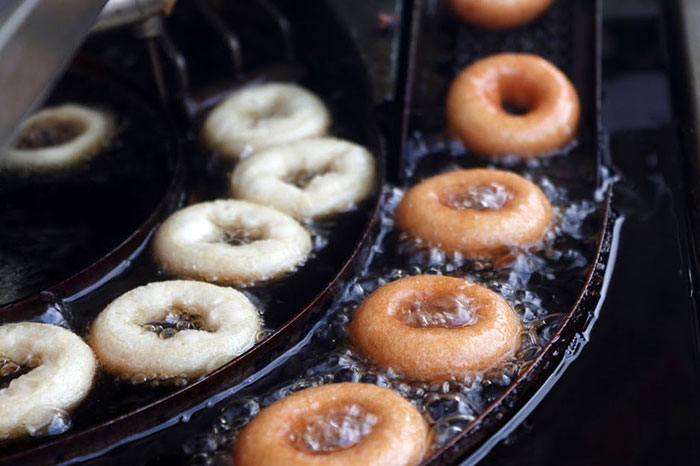 A bunch of info and content on this page came from the Calgary Stampede’s 2019 planner PDF. Go check it out, tons of really great info. Thanks CS!