It’s no secret that I love camping super lots, so when I had an opportunity to go camping at Birch Lake in central Alberta, I jumped on it (I went in a Karma Campervan). Took lots of photos too. Birch Lake is located southwest from Caroline, Alberta, in the district of Sundre. It’s a beautiful lake surrounded by forest, and fortunately for Albertans who like to camp for free, it’s also surrounded by crown land. Even though there are no designated campgrounds around Birch Lake, there are several ‘regular’ spots people use, which are more or less the same thing, you just get to camp at no cost. Don’t forget to bring your own firewood!

Lots of mosquitoes out there too. Don’t say I didn’t warn ya!

Leaving from Calgary, drive time is about 2 hours.

Birch Lake is located bout a 20 minute drive southwest from Caroline, Alberta. Most of the drive is on paved roads, as well as maintained gravel roads. Not a difficult drive, if the weather isn’t too bad. The trail leading in isn’t too difficult, but it does have a couple of steep inclines. 4×4 recommended if you can. 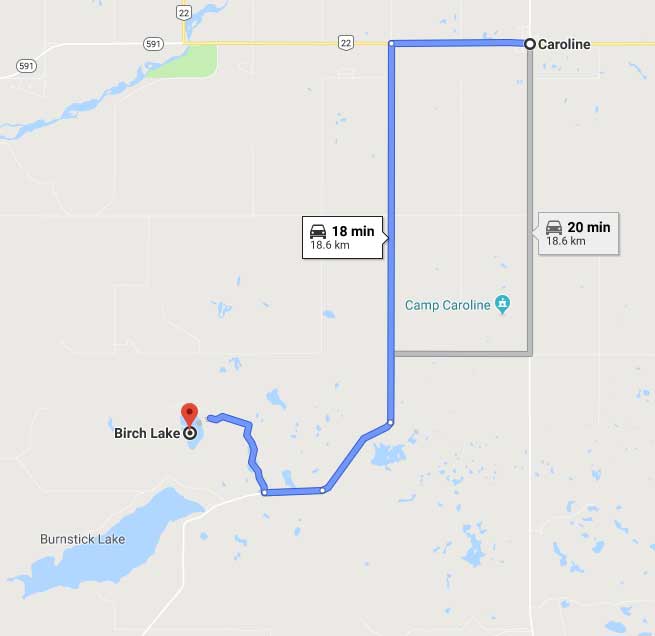 On the way back from camping I recommend going through Bowden, AB and stopping by at the Starlite Diner Car. Try the poutine (it’s salty but good). 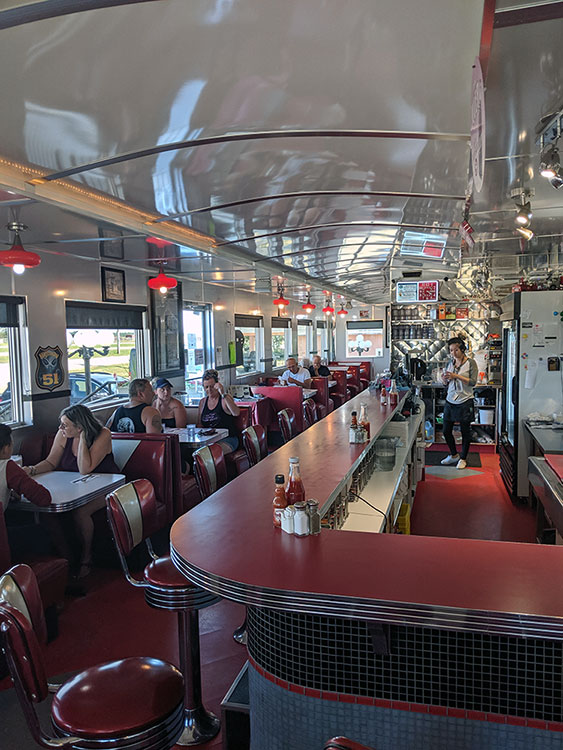 Where You Can Camp

We camped right beside the lake! Just north of it anyway, in a small clearing. Because it’s crown land, you can camp pretty much anywhere you want, within reason. Birch Lake is a popular day use area, so we were surrounded by people all the time. We wanted to be close to the lake, so that was expected. There are several places further out from the lake that have a lot more privacy. There’s even lots of room for trailer campers and RVs.

Here are just a few of the bigger spots people often use. There’s lots more you can’t see! 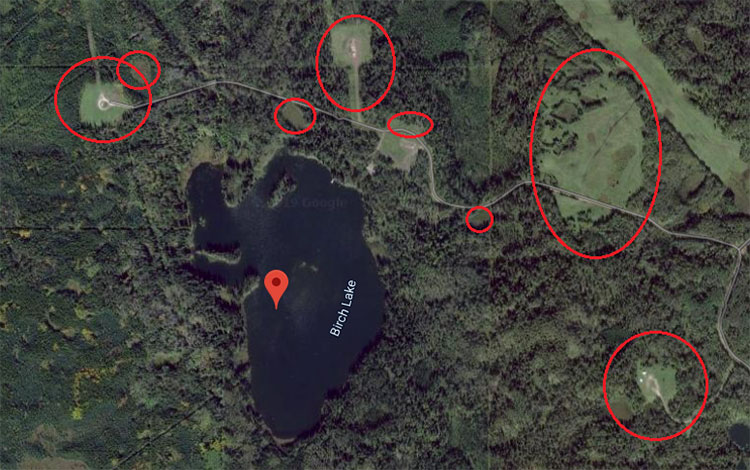 What Is Crown Land?

Crown land, also known as public land, is land that is owned by the public and looked after by the government. Crown land is left in its natural wild state, free from development. About 60% of Alberta is crown land and Albertans are basically free to use it as they please for various outdoor activities. People often use crown land in Alberta for camping, hunting, riding dirt bikes and quads/ATVs and other off-road vehicles, hiking, snowshoeing, cross country skiing, snowboarding, hiking, climbing, canoeing/kayaking, shooting guns, shooting pictures, mountain biking, riding horses, etc.

Also, I don’t know who maintains this Google Drive collection of land owner maps, but it’s a wonderful resource – thank you! These are maps that show who owns which plots of land in Alberta, including which ones are crown land.

Out on the lake you’ll find people doing all sorts of recreational water activities all day long. I saw several people using cool looking fishing kayaks things, paddle boarders, rowboats, canoes (including normal ones and inflatable canoes), even inflatable party raft and of course, boats. Even though there isn’t really a beach area, people were also swimming in the lake.

Lots of UTVs, dirtbikes, ATVs, Quads and similar, out around Birch Lake. There must be some popular trails around the area, or maybe near Burnstick Lake which is nearby? Not sure, not my scene. They weren’t too crazy loud or anything, but I did see and hear them. Some dudebros were shooting off fireworks at night, too. 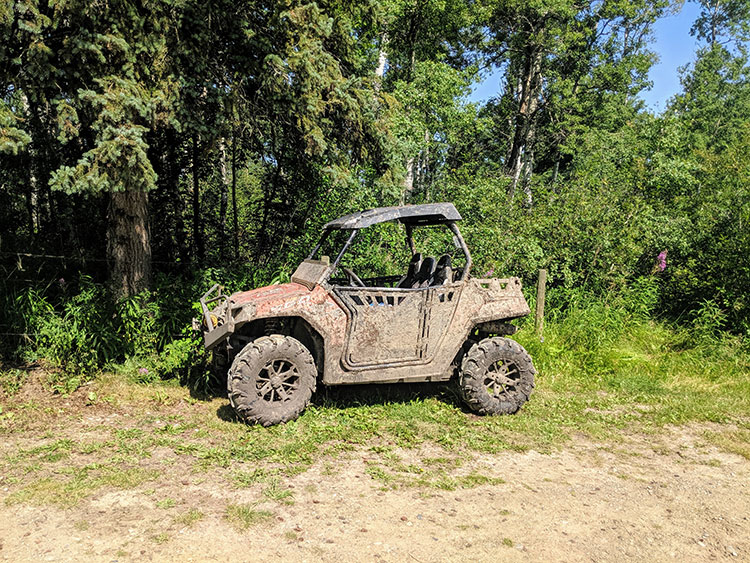 If you’re into these things, and have kids, and money to burn, bring something like this – they’d have so much fun!

OFF! FamilyCare Insect and Mosquito Repellent with Power Dry Formula, Bug Spray for up to 6 Hours of Protection, 113g

On the north end of Birch Lake is a parking area with signage regarding the land use, the boat launch, and an outhouse. You can only take small water craft you can carry down the hill to the boat launch. No power boats here sorry. I believe this is the one and only boat launch on the lake. 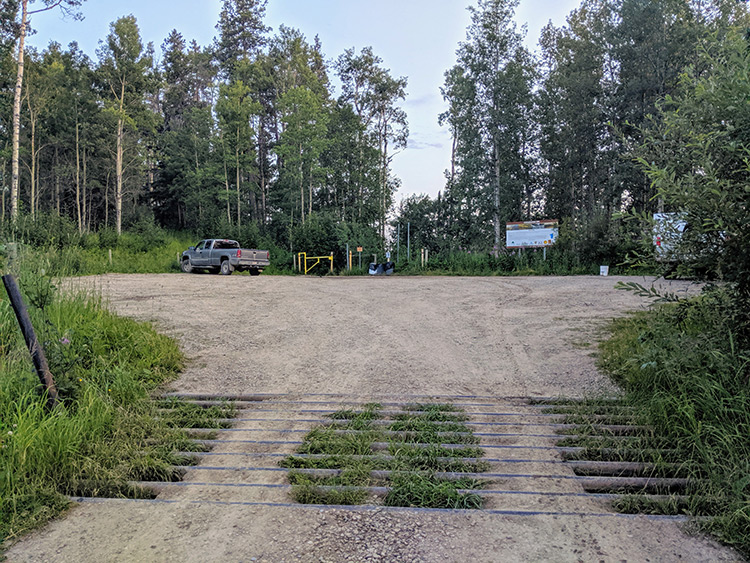 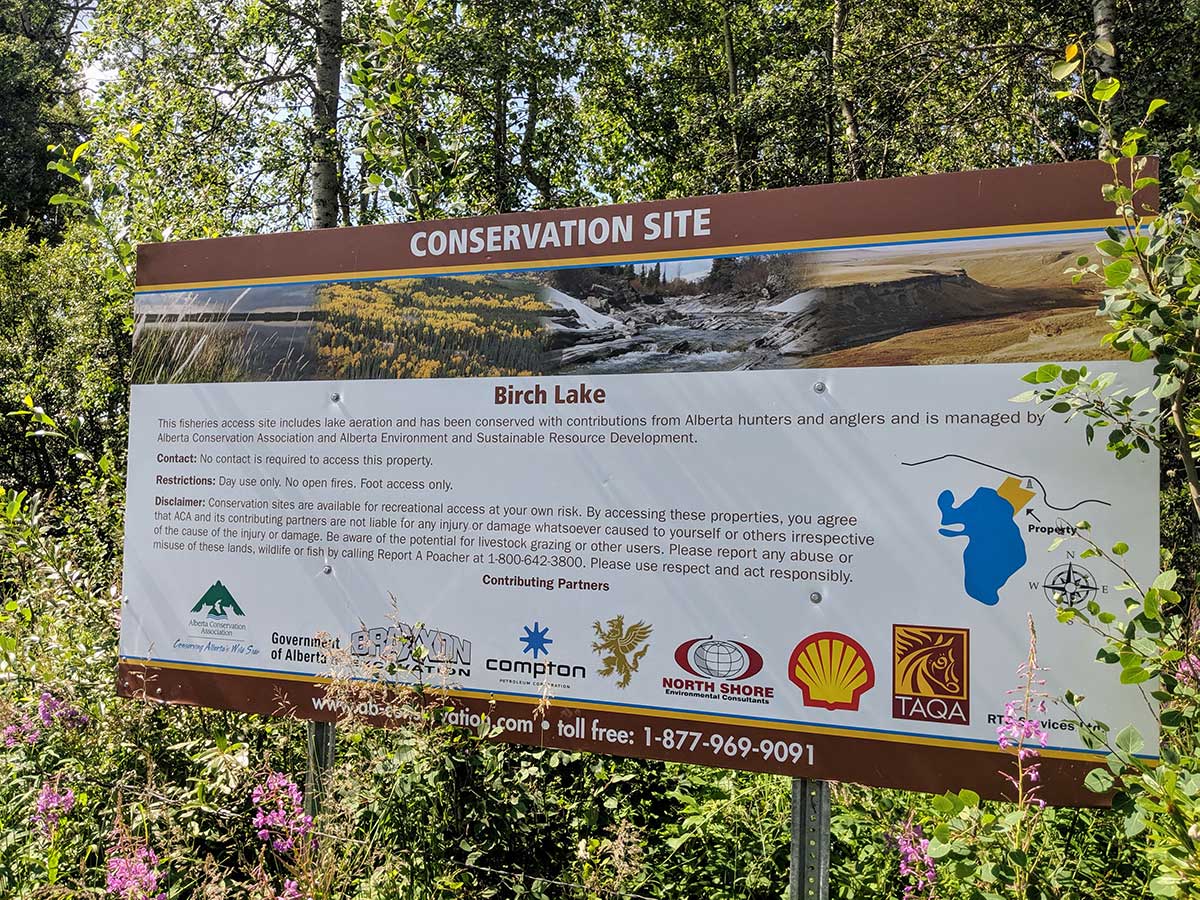 This is the pathway from the parking area, to the boat launch. At the top is a locked metal gate, so you can’t bring bigger boats down here. Maybe there’s other areas of the lake that can handle them? Maybe you’re not allowed to bring bigger boats? I’m not really sure, I’ve never had one. 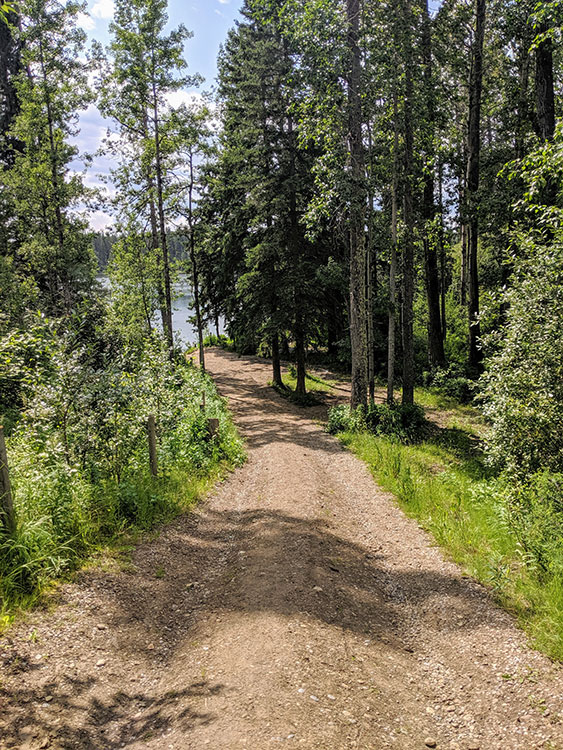 This hill gets pretty slippery when wet.

I saw lots of people fishing on all parts of the lake. They were fishing from rowboats, canoes, kayaks, those little fishing pontoon things, from all over the shore that was accessible.. but I didn’t catch anything myself. I did see a fish! It chased my grub for a very short time. Does that mean the fishing isn’t any good? No way. The fishing is great there, it’s beautiful and so peaceful. I did see other people catching fish further out, but I was on the docks and caught nothing, other than a million mosquito bites. Guess who forgot to bring mosquito repellent? 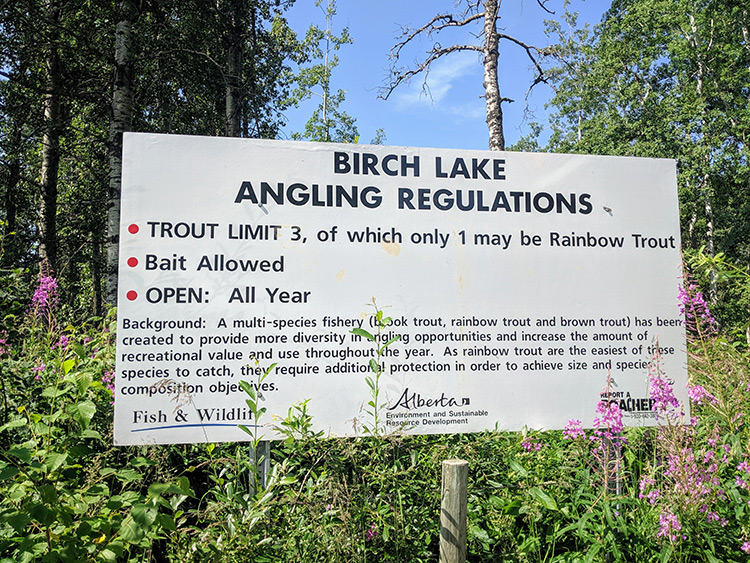 The weather was a nice combination of really sunny, to cloudy, to rainy, back to sunny. A stereotypical summer in Alberta, basically. 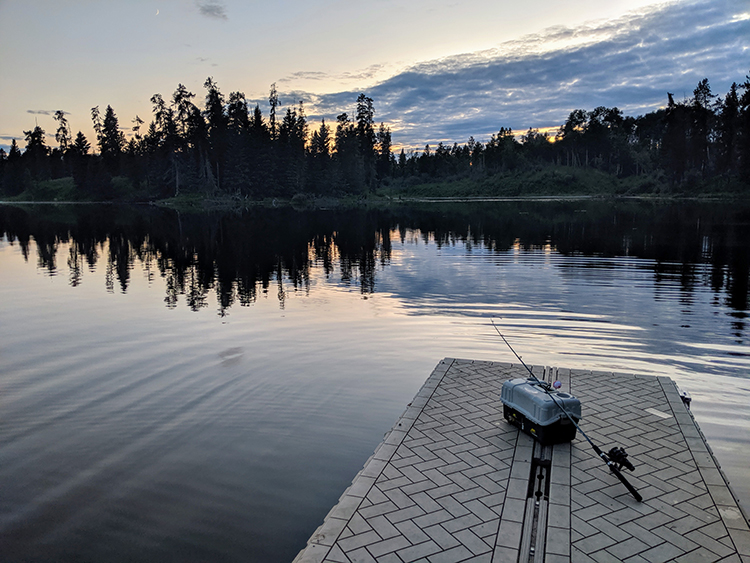 Are There Any Outhouses?

Yes! For some reason, there is! I believe it’s managed by Alberta Conservation, but really I didn’t ask too many questions. If I don’t have to poop in a bucket or in the dirt, I consider that a win every time. The outhouse has 2 big rolls of 1-ply toilet paper, and that’s it. I suggest bringing your own luxury 2-ply roll instead, but it’s your call. Also bring hand sanitizer because there isn’t any in there. It does have a lock on the inside so you can relax for a bit. Kinda stinky. 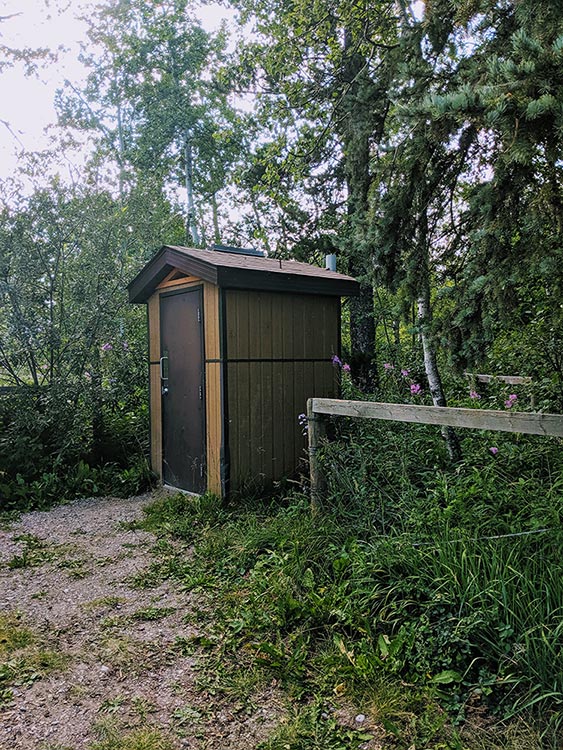 I’m with Koodo (they’re a TELUS company and use their network) and did have cell phone service at Birch Lake, and although it was spotty at best, I was able to maintain a phone call without it dropping. Service mostly-worked while down at the docks fishing, but it was better up the hill a bit. I can only speak to Koodo but the other people I was camping with seemed to have similar service with their providers.

I’ve been to Birch Lake in both the summer and the winter months (ice fishing!), and both are absolutely beautiful. If you’re looking for a good family camping crown land spot, this is a pretty good one.

One last thing, and don’t forget, leave no trace! Clean up all of your garbage and leave things as you found them, or better.

Shawn Ginn Is For Sale