Don’t Feed Bread To The Birds At Princes Island Park

Do not feed the birds at Prince’s Island Park, if you can help it.

While bread might be really bad for birds (you’ll see below), there are some foods that are really good for them! If you’re going to feed the birds at Prince’s Island Park, do it the right way. Bring stuff that is nutritious and beneficial for them. I’m getting a little ahead of myself.

Do not feed birds bread. Ever. 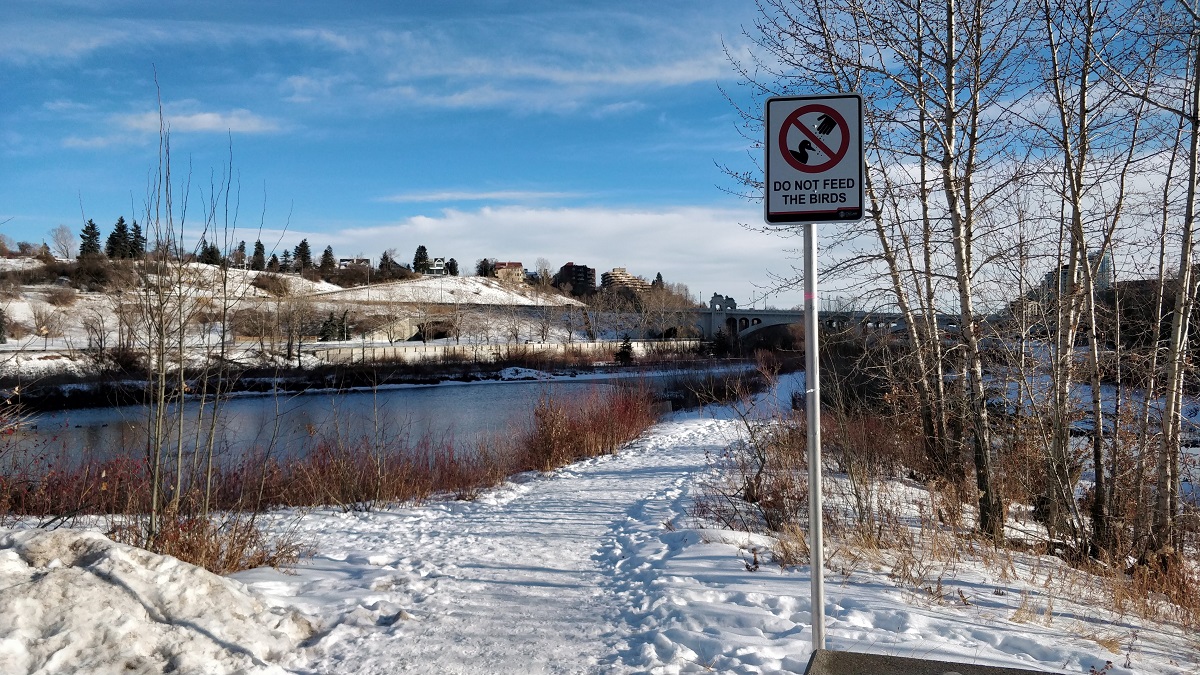 You’ve probably seen it a million times. Some old man, or whomever, sitting at an old wooden bench just in front of a lagoon filled with ducks, casually tossing in handfuls of day old bread purchased not forty five minutes ago down at the market, he says with a smile and a wink. Ducks love eating it too! They will eat bread all day long if you let them, and lot of them do, unfortunately. Same with Geese and other birds. Why? Because people routinely bring bread crumbs down to the water to toss in for birds.

Because birds all hang out in the same locations around Prince’s Island, it’s easy for them to figure out where the bread is going to show up, and they will take advantage of that. Why bother foraging for food when people keep bringing it to you? 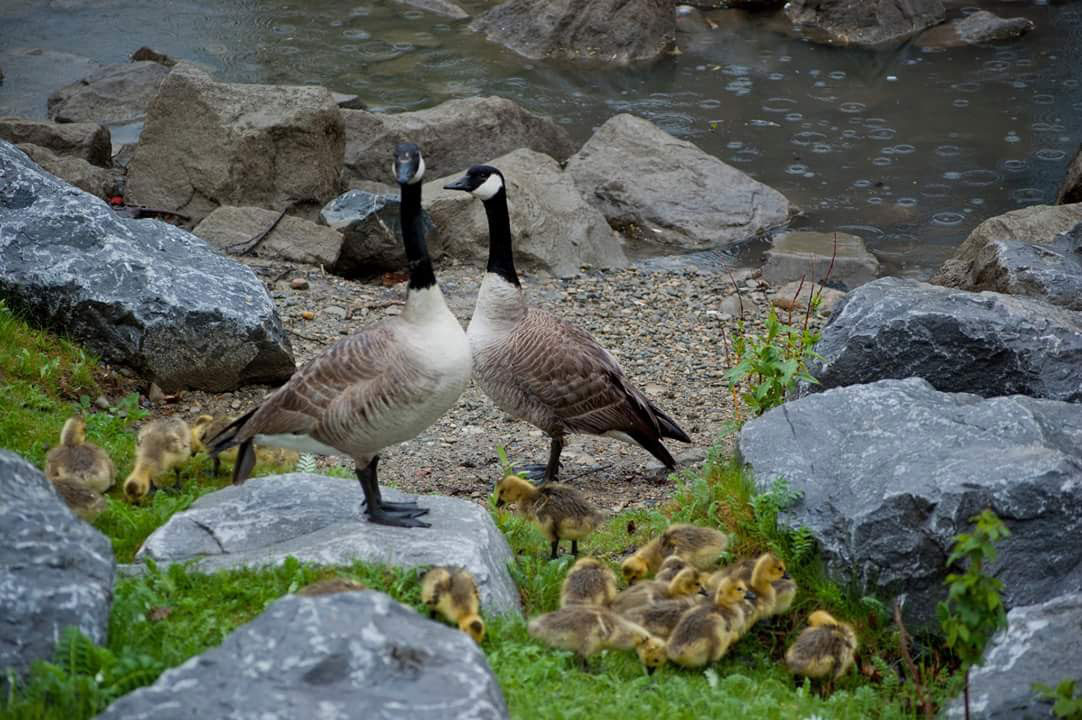 Even though they build their nests so close to humans, and the ryan goslings/babies can be soooo adorable and cute, they are still wild animals. They should be treated as such! Don’t let your kids try and ‘catch’ them either.

Why you shouldn’t feed the birds

In short, it’s bad for them. It doesn’t contain the proper nutrients or calories that ducks need to properly be a duck. In order for them to grow up big and strong, they need things like snails, worms, fish eggs, grass, weeds, algae, seeds, small berries, fruits, mollusks, roots etc.

Discarded bread also pollutes the water as it begins to rot and causes surface algae to grow. That, combined with the extra bird poop all over the place from them hanging out being fed, it’s just a bad time. More pollution means more bugs and mice and disease. 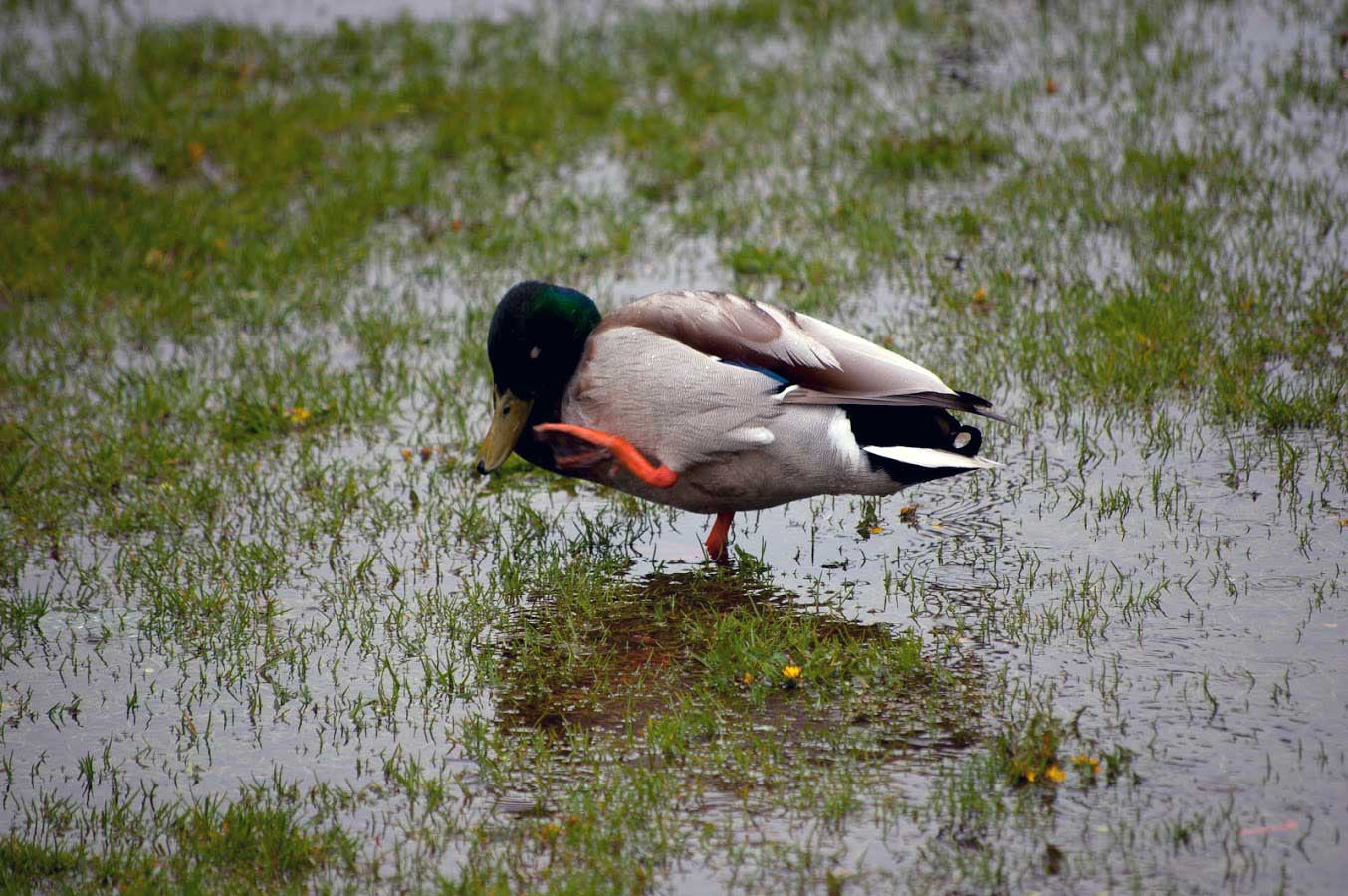 Different species of birds have different daily needs and nutritional requirements, and what may be good for one birds might not necessarily be good for another kind of bird, the same as with people. Bread isn’t exactly loaded with beneficial ingredients to begin with, and although it comes from wheat (which does come from a seed), it’s much too processed to be of any benefit to birds.

Do not feed birds these foods:

Rice isn’t necessarily bad for them (it certainly won’t expand and kill them), but it doesn’t include any of the nutrients birds actually need. Bread, buns, chips, donuts, goldfish, crackers all contain carbohydrates, which isn’t a bad thing in very small amounts with moderation, but there’s no way to control how much wild outdoor birds will eat if given the opportunity. If you only bring them a small amount of bread, and someone else only brings them a small amount, and someone else, and someone else.. all of the bread will cause the birds to gain excessive amounts of weight which will mess with their development (if they’re young), and lead to malnutrition and other problems. Sucks. 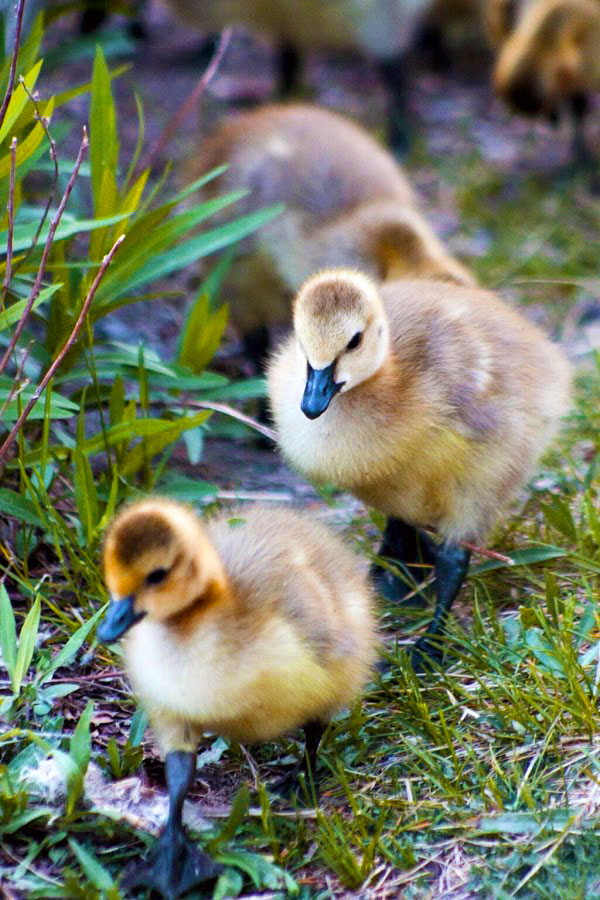 There is no way to control the moderation of food to birds fed by the public. Everyone thinks it’ll only be them doing it.. nope. 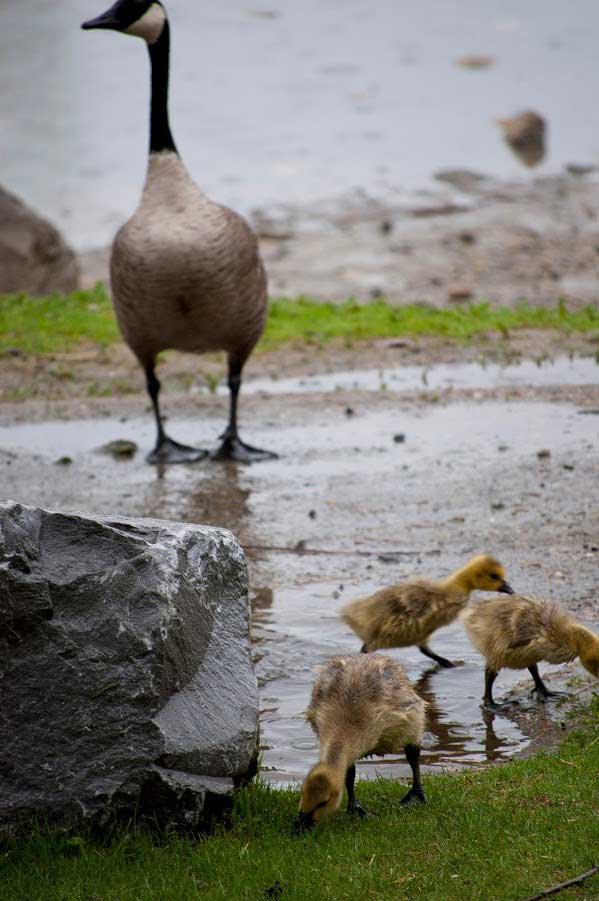 Angel Wing is a condition that can affect any birds, but it often affects geese and ducks, especially where they reside close to humans. The last joint of their wing gets twisted, and the wing feathers end up pointing away from the body laterally, instead of lying against the body, which makes it impossible for them to fly. This happens when the bird is young and still in development due to a high-calorie diet (too much bread/crackers, not enough bugs/fish), and a lack of manganese, and vitamins D and E. The wings ‘wrist’ joint stops growing at the speed the rest of the wing does, causing it to grow incorrectly. It can be cured if detected early on a young bird, but there is no way to fix it in adult birds.

If a bird can’t fly, that’s pretty much a death sentence. 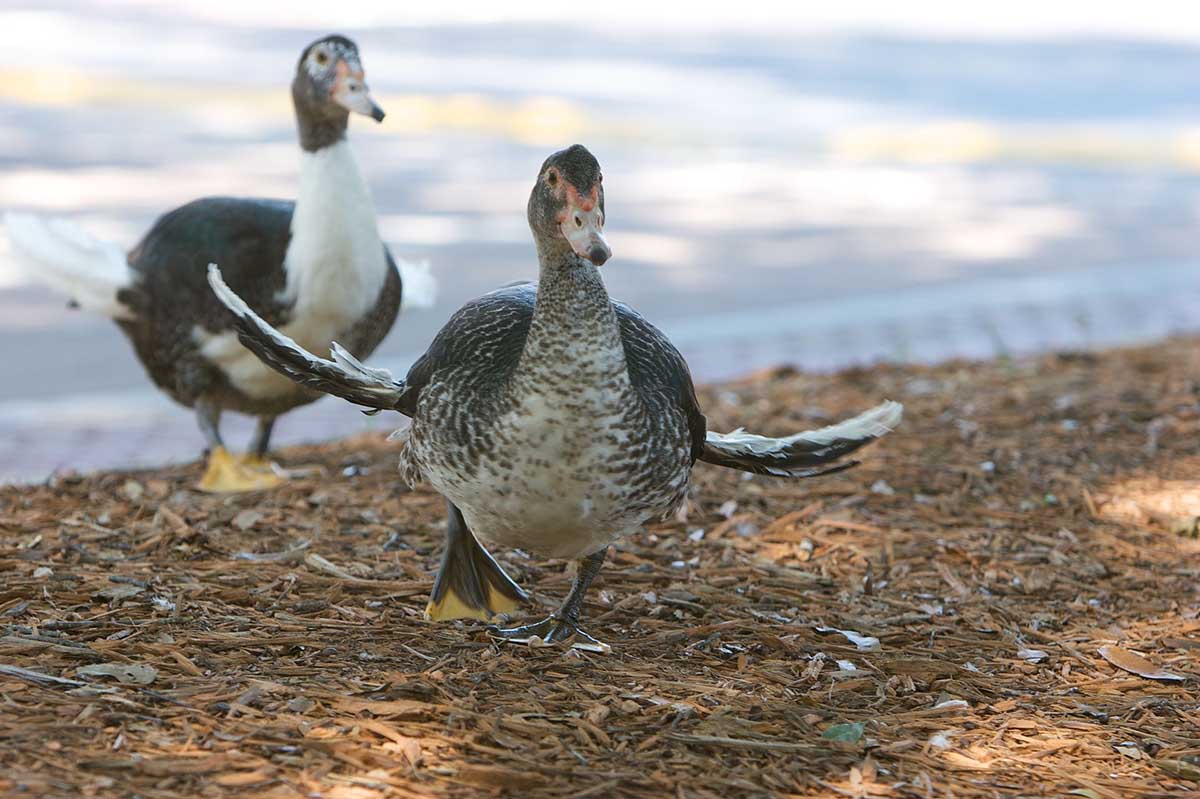 Here’s a video from NewsChannel5, from Nashville, TN. They go into depth about why it’s bad to feed birds bread. If you ever see someone feeding the birds bread at Prince’s Island Park, or Eau Claire, or anywhere else, fill them in on why it’s such a bad idea. 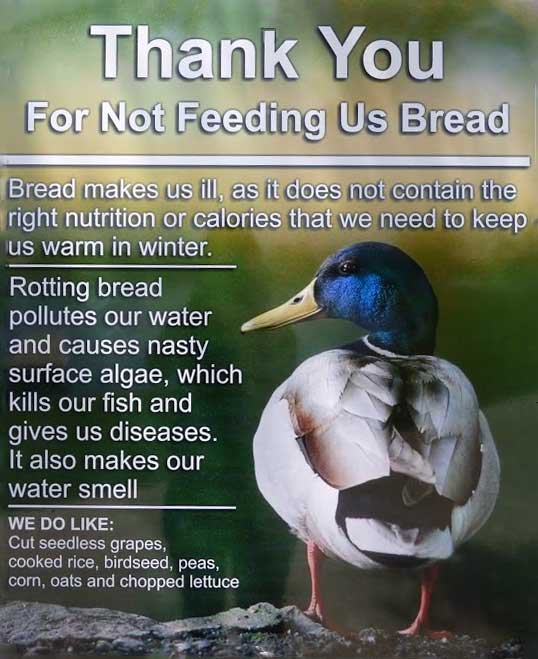 What you CAN feed the birds! 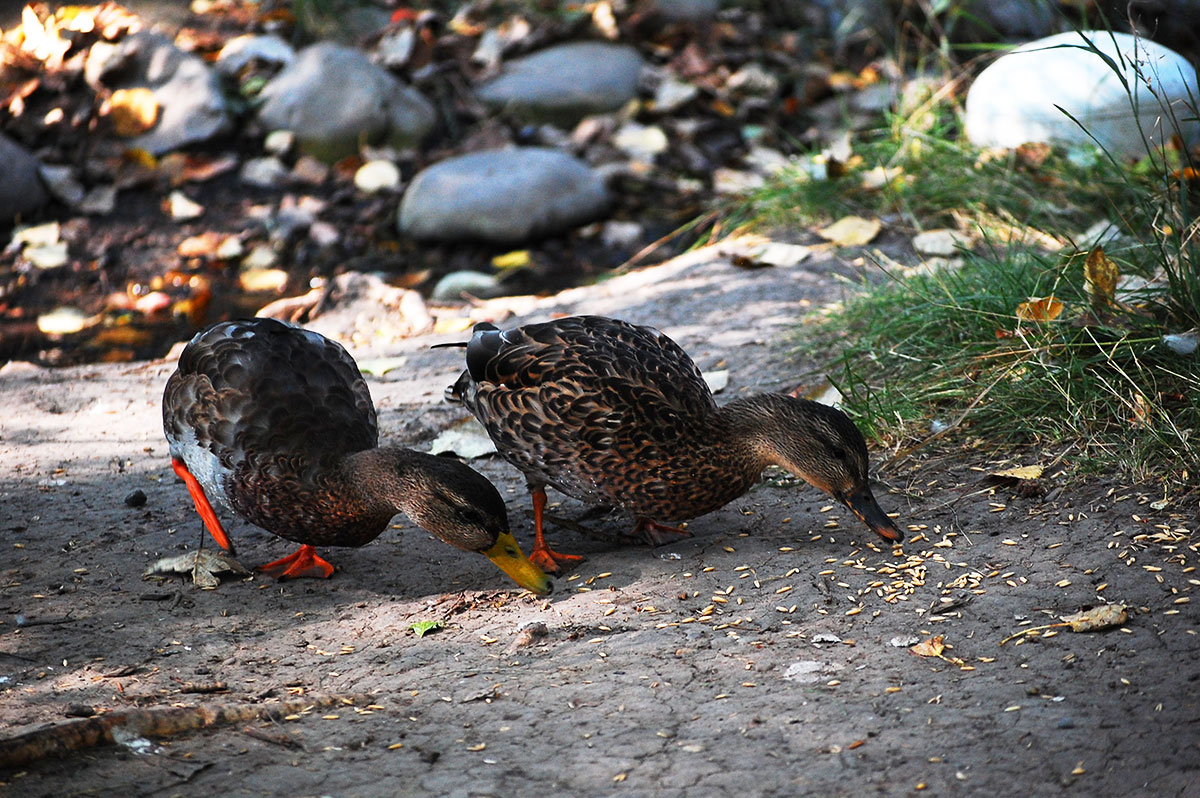 There are some healthy foods that will actually benefit the birds if you really want to feed them (which is honestly pretty fun!). However, just keep in mind it is best if you just leave the ducks and geese alone and let them rely on their natural food sources.

It’s best not to throw any food in/on the water, as anything the birds miss could sink to the bottom and contribute to polluting the water, unless you have specific bird or duck pellets designed to float on the water (you’ll know if you have those..). Drop bits of food on the ground just beside the water, or on a grassy field if possible. 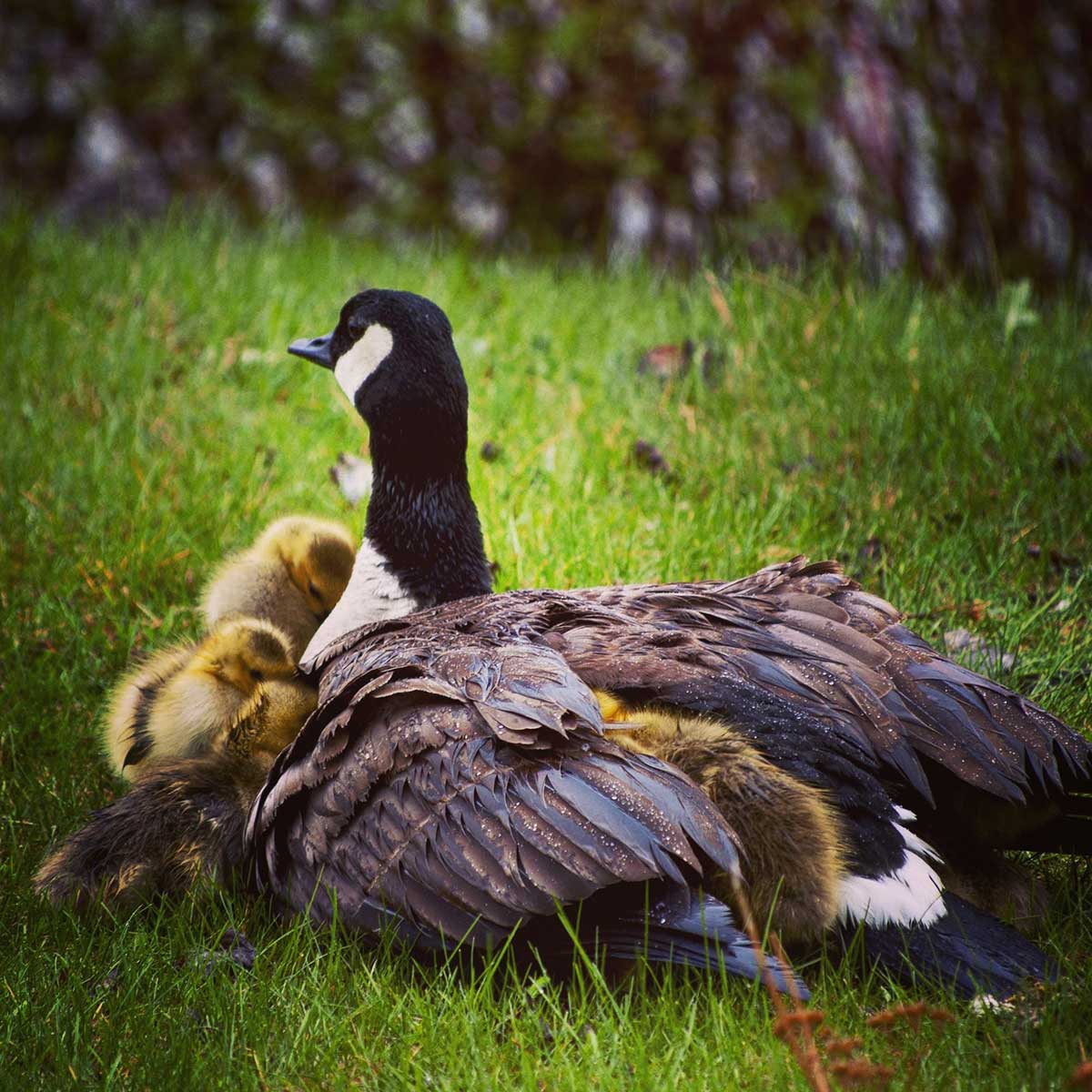 http://www.ducks.ca if you want to donate to Ducks Unlimited Canada to support conserving wetlands.