Ever wanted a Praying Mantis as a pet? Do you also want to help fight cancer? Here’s your chance to do both at the same time. On June 29th this kid from the internet named Alexander (and parents) will be selling them for a donation of at least $10 from 9:00 am until 1:00 pm. They’ll come in a small terrarium, along with care and feed instructions. He’ll also have extra flightless fruit flies and meal worms food if needed. Half of the money raised will be donated to the Kids Cancer Care Foundation of Alberta.

In 2018 Alexander raised $585 for Inn From The Cold with his Praying Mantis project! It made the news. What were you doing when you were 5?! 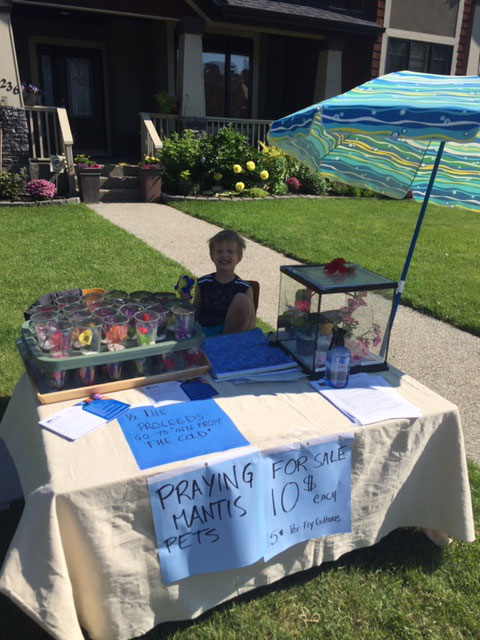 How It All Started

Last year, following his birthday and Christmas, my son, Alexander, wanted me to buy him Lego, which I refused to do. He then thought about it for a bit, and asked “well, can I set up a lemonade stand and make money then?” (it was January). I laughed, but thought about it for a minute, and said, “well, I have an idea. lets try something entirely new, and I’ll front the money for it, if you donate half the money to charity.” And the preying mantis project was born.

He was involved in the project from the get-go, did everything with me, including research, sourcing and buying the food and the terrarium to house them, made the individual food cups and the individual terrariums. He was active and engaged with all the public that came to buy them at his booth. He picked “Inn From The Cold” as a charity. Last year, my 5 year old donated $585 to “Inn from the Cold”. He did a tour of the facilities, and chose to put the money towards buying 300 people that had no homes a lunch.

At Christmas his last mantis died and he immediately wanted to start the project again.

This spring he has been just as engaged in it again. He has chosen the kids cancer foundation because it is a kids charity, but also because his Aunt Julia is fighting cancer right now. Thanks for your interest in our “pet” project. 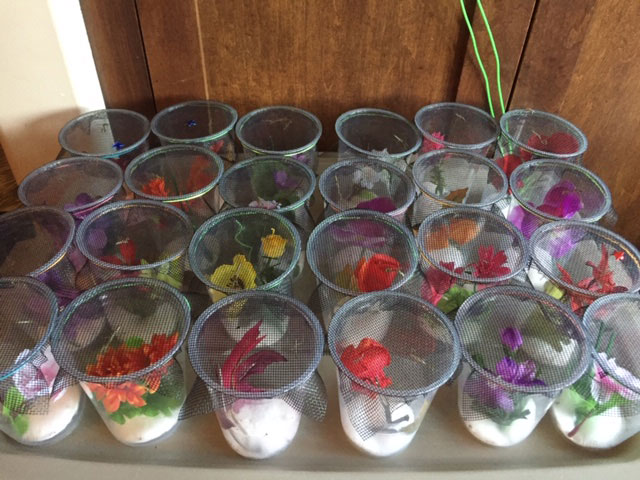 The species of these ones is Chinese Mantis (Tenodera sinensis), the only legal kind of Praying Mantis you can have in Canada.

Because why not right? It’s super cute and awesome what he’s doing.

What is the name of your business?

I don’t have one, I’m only 6. Well… I also have a bunch of preying mantises and we have a new egg.

Why the Praying Mantis?

Because we thought praying mantises were really cool, which they are. So when they molt, they get bigger, and cooler.

Tell everyone about the Praying Mantis!

Well, here’s what they eat: they eat small bugs, like flightless fruit flies or things that can fly but they definitely shouldn’t eat the killer bee. It would definitely get killed.

How do you take care of them?

By giving them water and food. Every single day. Until they die.

How long do they live for?

About a year or two? I forget.

Why did you start selling them?

What are you doing this year to help people?

We are going to help kids with cancer, and kill the cancer in their bodies, by donating praying mantises.

Why donate instead of keeping all the money?

If we keep the money, then its just hoarding, right?

Any plans to expand into other small pets?

How can other kids get started doing stuff like this?

I bet they didn’t have the idea to do this. they are probably donating candy or something like that. Choose something and do it!

How can you inspire other kids and parents to do something too?

To do something TOO? I have not thinked about that. 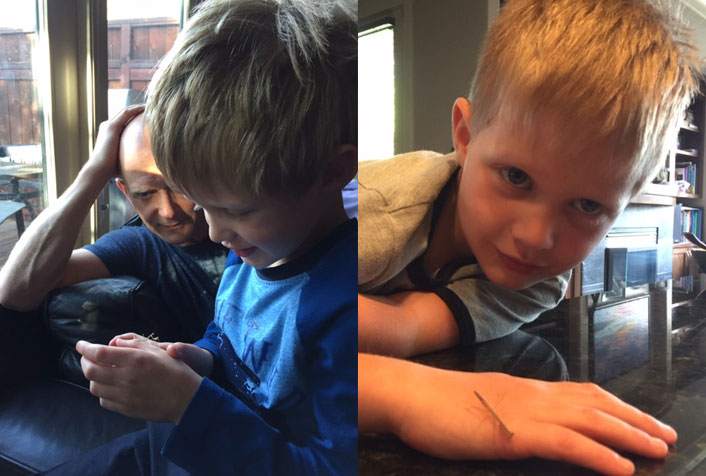 They’re easy and fun to take care of, it benefits charity, win win. If you’re going to get one, you’ll need to do a little research first. These Praying Mantises will outgrow the enclosure they come in, but Alexander can explain everything once you’re there.

3 thoughts on “Buy A Praying Mantis Pet For $10, Support Charity”