We’ve had the pleasure of staying with them while attending our good friend Erin Skye Kelly’s conference and on our most recent January trip, we took the opportunity to check out some of the claims for ourselves. I do not believe in ghosts, or an afterlife. The Mrs believes in ghosts to some degree. We both had the chance to explore the hallways and ballrooms separately, as well as together, and we both agree that we did not see, hear, smell, or grope anything out of the ordinary or supernatural during our visit. In fact, we’ve never encountered anything on any of our visits that wasn’t the Mrs startling at her own reflection in a window or mirror.

First, a little history about the castle! It was originally opened on June 1st in 1888 along the Canadian Pacific railway, one of many ‘rail hotels‘ across the prairies as they expanded out west. It was a hit! “If we can’t export the scenery, we’ll import the tourists!” -William Cornelius Van Horne, president of CP rail at the time. He’s reported to have said this at the opening. He damn well did too.

People from all over the world traveled to stay and soak up the beauty of the Rockies and it’s natural hot springs, so they decided to begin expanding and improving the hotel, to make it even bigger and better. 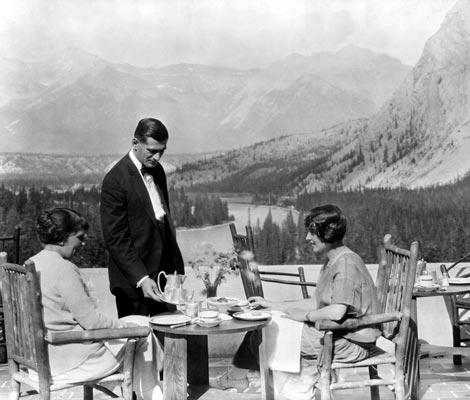 From Fairmont.com — To help adapt to the rise of international clientele, the CPR began a program of enhancement and expansion that ran from 1900 to 1928, the year the current hotel was finished. The program was divided into two periods: 1900 to 1910, saw all adjustments to the hotel pertaining to the original structure, and 1910 to 1928 where all changes were aimed at the completion of a ‘new’ hotel. More info 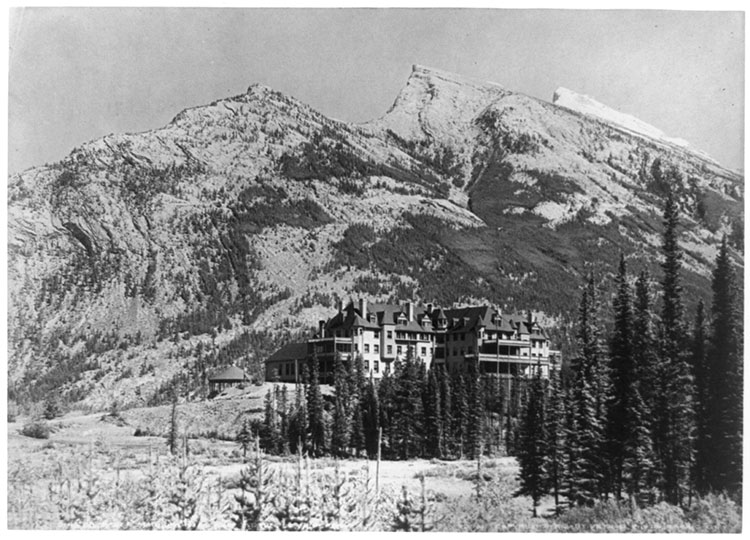 Fun fact: the hotel was actually built backwards, with the amazing mountain vista views available to the kitchen staff and not the paying guests. This was discovered part way through the construction by Van Horne when he visited to check on progress. Bet he was pretty pissed. Renovations fixed this to move things around, plus the addition of a gazebo. It didn’t really matter though… 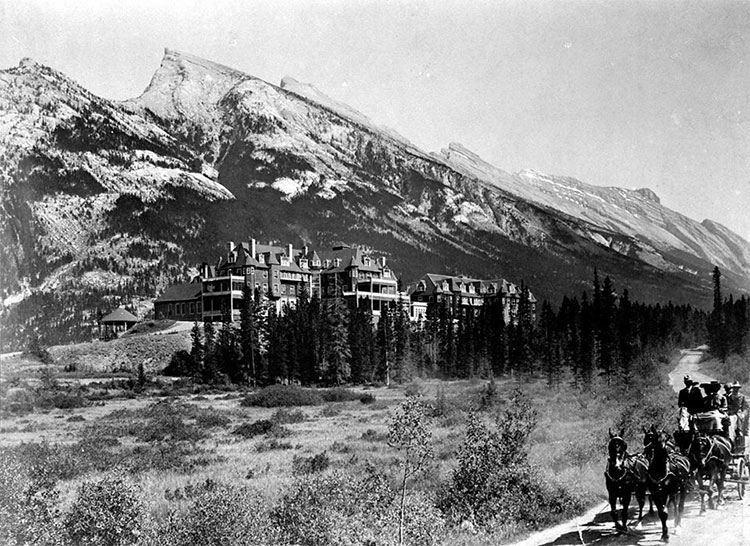 On April 7th, 1926 what was remaining of the original hotel structure burned down. It was scheduled to be tore down later on in the fall anyway, when the hotel closed for the winter months.

There are reports of a hidden or ‘secret room’ built into the original structure, another mistake by the contractors. The owner was not told about it. This room had no windows or doors, and was only discovered after the fire. There have been reports/rumors of ghost activity happening in the vicinity of this room since. Also? it might have been converted into a staff room! spooky stuff.

The hotel then re-opened fully in 1928. december 5th 1969 the hotel opened for the winter, and has been open year round ever since.

It is purposed that in 1975 a long time employee of the Fairmont Banff Springs hotel, named Samuel McCauley (or McAuley) passed away, having immigrated from Scotland and worked there as a bellhop for over 40 years. Legend has it that Sam jokingly threatened to return to the hotel after death to haunt it for all eternity. Guests have reported hearing giggling in the hallways, elevators stopping on floors randomly, seeing an elderly man dressed in a dated uniform meandering through the hallways, helping guests get back into their locked rooms and generally just being helpful and nice. It is said that Sam enjoys spending time around the 9th floor of the original hotel.

There are two flavours to this tale, both involving a bride and this staircase. 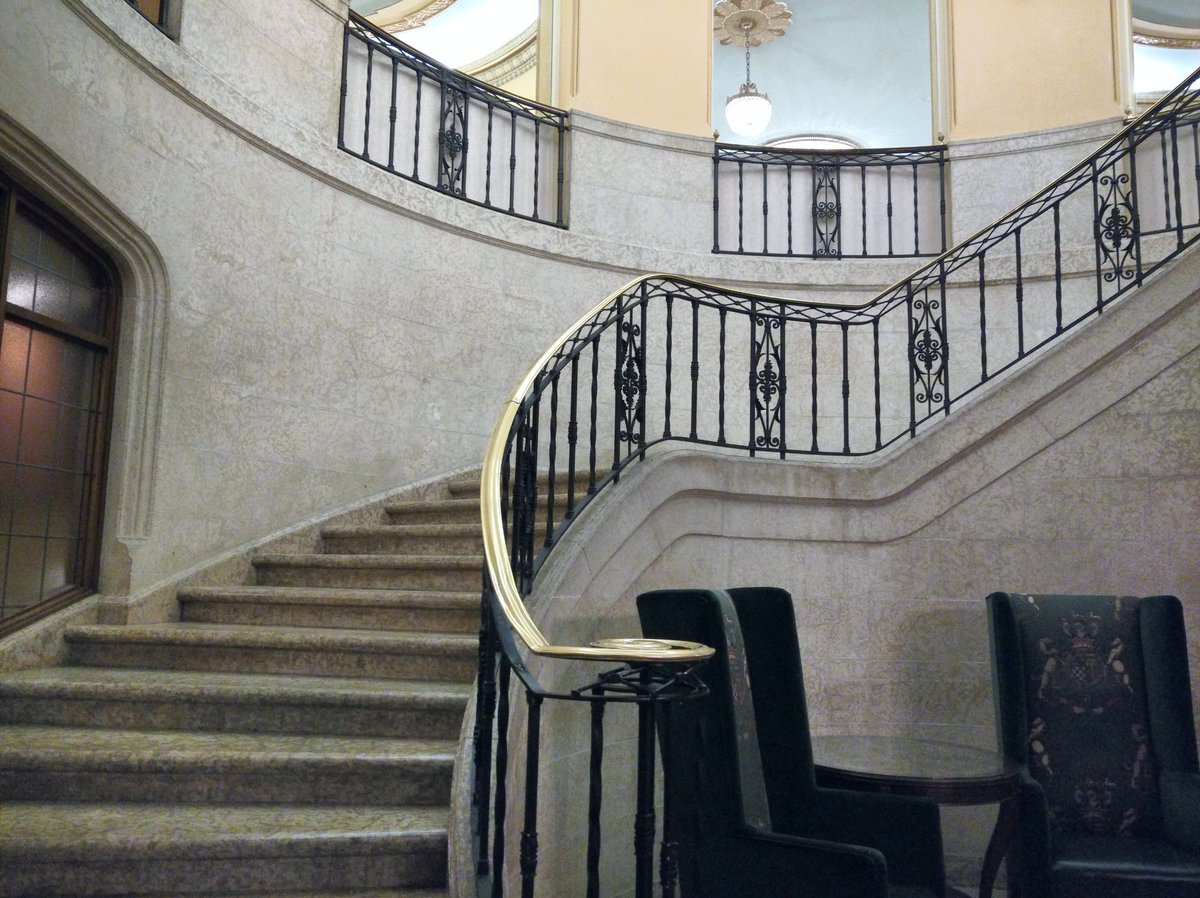 It was sometime back in the 1920-1930s while on the stairs to join her wedding party in the ballroom, her gown blew up in the wind catching the flame of some candles positioned on each of the steps, causing her to go into a panic, fall and break her neck — and die. Alternatively she is said to have died from burns suffered from going up like a tinderbox.

Guests have reported seeing a bride standing or walking on the staircase, or dancing in the Cascade ballroom. In addition the bridal suite, where the couple was staying at the time of her death, reportedly emits strange noises when not in use. A cold breeze has been noticed while using the staircase. This may or may not be due to the doors to the outside terrace that are nearby. 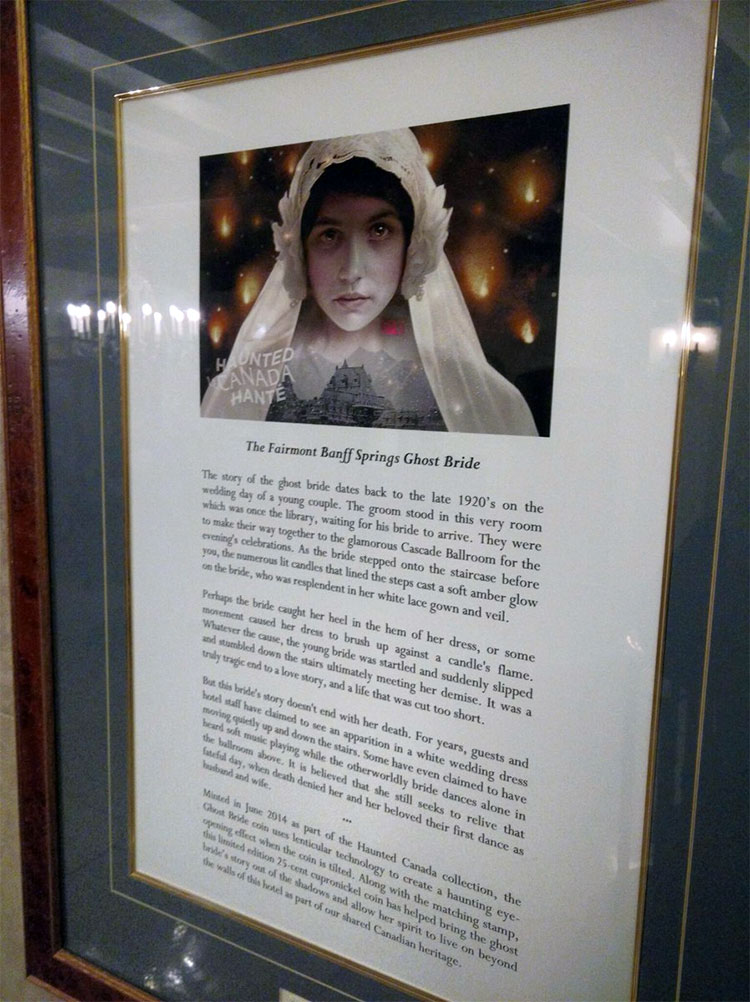 Supposedly a ghostly bartender manifests somewhere, and encourages guests that have had too much to drink  and they need to head to bed, however I haven’t been able to find out any additional information on this one. Sounds kind of like a normal bartender. Or my Mom.

Much like the bartender story, I haven’t been able to find out much about him. There are mentions online of guests seeing a bagpiper around the grounds, without a head, somehow playing bagpipe music but nothing with detail or more information. Perhaps just one of those things that people keep re-telling; or maybe the staff of the hotel made him up to play up it being haunted?

The Missing Haunted Room 873 At The Banff Springs

On the 8th floor, where room 873 should be, is only a blank wall. If you weren’t paying attention you wouldn’t even notice it was missing. But, if you look closer, you will see that not all is as it seems. Here is a video that the Mrs took while she was investigating the hotel.

We spoke with management about the missing room, they didn’t tell us anything about it (go figure) but they did ask not to knock on it, as it could disturb guests near-by, haunted or not.

The story told is that an entire family was slaughtered (by the father) in the room. After the investigation and cleanup, the hand prints of a child kept reappearing on the bathroom mirror, even with nobody staying in the suite. Totally haunted. People have also reported hearing screams in the middle of the night. Supposedly, that movie “The Shining” was actually based on the murders at the Fairmont Banff Springs Hotel.

We don’t think it’s actually haunted because we didn’t personally see anything, but who knows. Maybe that’s a poor way to determine if something is haunted or not haha. All in good fun, but seriously hopefully nobody gets spooked by ghosts while staying there, it’s a beautiful hotel.

Have you been? did you see/hear anything? Comment below