What Is Cronk? Cronk Is The Drink

In Calgary, throughout the summer of 2020 you may have seen the word ‘Cronk’ mentioned once or twice in social media land, or even in the news. The Cronk hype has ran wild ever since it’s re-discovery, making headlines throughout Canada and even the world. What Is Cronk though? Dr. Cronk’s Compound Sarsaparilla Beer, or just Cronk, is an alcoholic drink that was invented and sold more than 100 years ago, but the recipe and it’s existence were lost to time and long forgotten about. In 20202 someone found mention of Cronk ads in an old newspaper from the 1800s, shared it on Twitter, it went viral, breweries started making it, Cronk is back baby!

Who said Cronk was dead?

Who found Cronk? Paul found Cronk. Paul Fairie is an instructor and researcher at the University of Calgary. In his spare time for some reason he enjoys reading through old forgotten newspapers, sharing the interesting old timey tidbits on his Twitter every now and then. One day he tweeted out that he noticed these unusual little ads in an old Calgary Herald newspaper from 1883, kind of hidden between news articles but placed in such a way as to grab your attention, simply saying “Cronk”, or “Cronk is good”, or “Cronk is the drink”. Paul was intrigued and kept digging and sharing all of the information he could sleuth up for Cronk, the drink. It was originally developed in the 1800s by Warren Cronk and sold across North America, including Canada.

In 1883, a drink called "Cronk" started advertising in the Calgary Herald. See if you can spot their ads. pic.twitter.com/yg3dMRDkY6

Also, I really should get a haircut.

@paulisci I found a recipe. Now we can all drink Cronk pic.twitter.com/OGjyobr3Hj

Super cool local brewery Cold Garden Beverage Company got wind of Cronk on Twitter on June 24th and immediately ordered the necessary supplies to begin brewing it. Without a normal recipe to brew from, nobody else to copy, and without using sassafras (no longer approved for human consumption), how it was actually going to taste was a huge mystery. However, most importantly, Paul’s newly discovered life long dream of Cronk the drink existing FINALLY became a reality. Cronk dropped on August 19th 2020 at the brewery, and of course it sold out pretty much immediately. Cronk is not the easiest drink to concoct, so there was only so much to go around. Most people bought several bottles for family and friends in addition to themselves. Proceeds from the sale of Cronk went towards Heritage Calgary and The Alex: Changing Health, Changing Lives.

Will there be more Cronk brewed? I don’t know.

THE BIGGEST NEWS OF ALL: Cronk manufacturing begins.https://t.co/rOHVYsscvq

Cronk is gone. We will be releasing the remaining bottles for sale on the website soon. Details to come. Cronk.

It’s only appropriate that you hear what Cronk tastes like from head Cronkologist himself! See Below. Keep in mind that any Cronk made in the year 2020 and beyond are brewers best interpretations of Cronk, based on surviving recipe information available today. There might still be authentic bottled Cronk out there somewhere. One can dream.

Cronk is the drink

That I am drinking

Because this is at least partially your fault

Managed to get our hands on some bottles of the highly anticipated #cronk revived by @cold_garden. As it has not been brewed in over #100years no one knows what it should taste like, but our thoughts are that it is not one to be slammed back and that it is best enjoyed sitting back and sipping on. We find the molasses and sarsaparilla flavours really come through with the molasses being more prominent. Maybe you might pick up some of the flavours from the other ingredients while the remaining flavours were subtle in the background. We can definitely see this making a comeback if not at least a once a year appearance. Cronk. Cronk is good. Buy Cronk. Cronk is the drink. 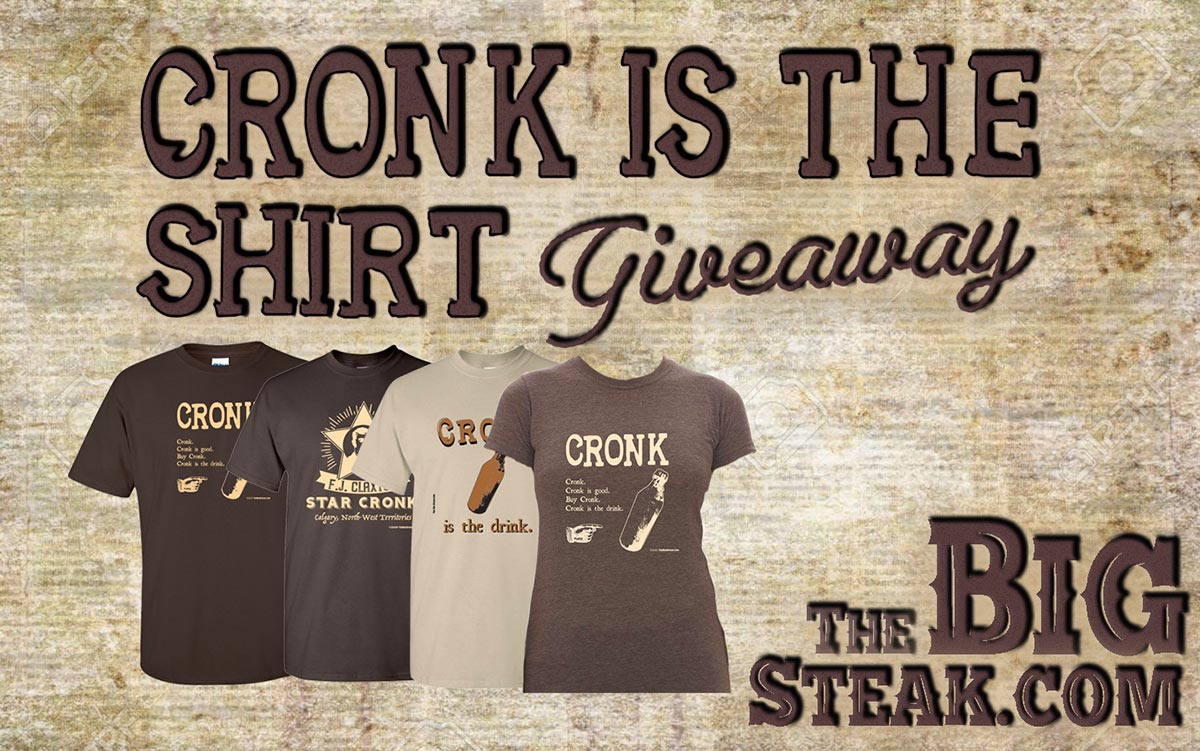 Local t-shirt start-up The Big Steak has kindly donated 5 Cronk t-shirts to give away in celebration of Cronk, the drink. Details on how to enter below! View all The Big Steak t-shirts/products. #SupportLocal!

The Big Steak Graphic Design Ltd. is a home based business by Cronk super-fan Edwin Mundt, a graphic designer who is immunosuppressed but determined to pave a new career path in this post-covid world. Edwin likes long walks on the beach, Cronk, and is a big supporter of The Alex.

Since 1973, The Alex has provided thoughtful, comprehensive care to vulnerable Calgarians. With clinical and social components included in almost all of our programs, The Alex tackles tough health and social issues head-on, and our preventative, cost-effective approach saves taxpayer dollars by moving people from poverty to stability and from crisis to wellness.thealex.ca/about
@thealexchc @thealexcommunityhealthcentre @TheAlexCHC

We are giving away 5 Cronk t-shirts! In 5 different places. Enter on each one to increase your odds of winning.

The contests run from August 22nd 2020 until September 12th 2020. Winners will be contacted by The Big Steak to work out details on sizing, which t-shirt you’ll be getting, instructions on how you’ll collect etc.

CONTEST IS FINISHED! THANKS EVERYONE!

What do we send to this list? Not really sure yet. We’ll e-mail you to let you know when we figure that out. Thinking about a weekly or monthly newsletter? Perhaps more contests? Sky is the limit. No spam or BS at any rate.

Join our Discord server. There is a #giveaways channel, with a GiveawaysBot. Find the contest post, click the 🎉 button, you’re entered!

We call it the “Calgary Discord Server“. So original eh? If you join the server to enter the contest, perhaps say hello in some of the chatrooms? #General is always active!

What You Can Win: 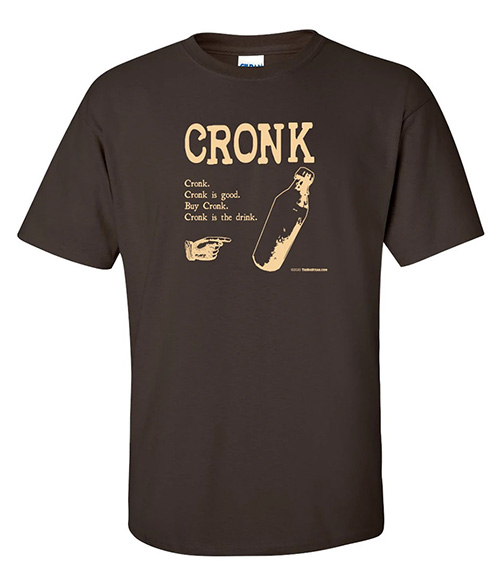 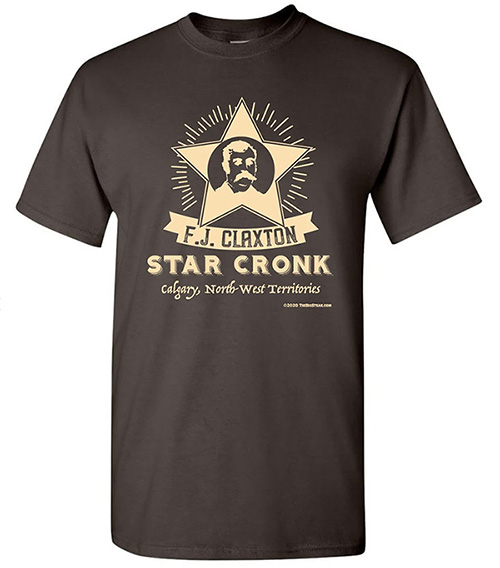 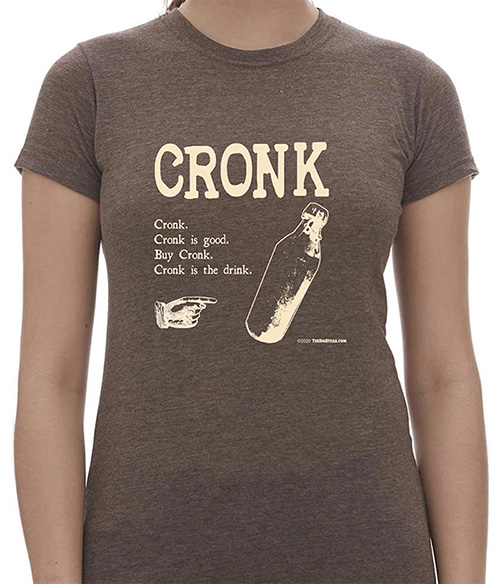 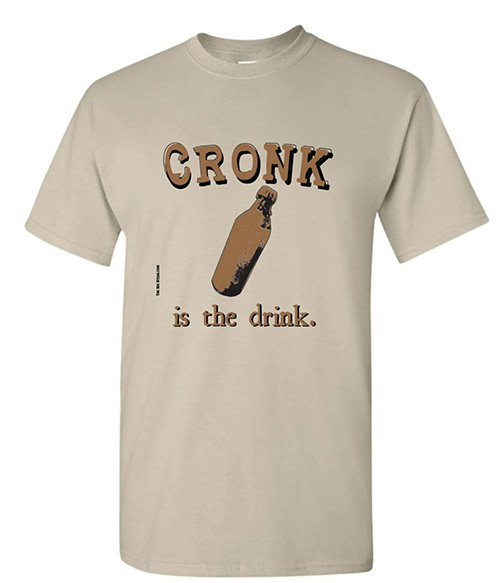 A brewery in Ottawa also brewed up some Cronk and named it after one of their regular customers, the one who brought it to their attention in the first place. Dr. Ferguson’s Sarsaparilla Ale they’re calling it, a “Cronk style ale”. Fun!

Cronk is the drink.

Complete Guide To The Banff Gondola