Update: Unfortunately Calgary Brewery Tours no longer exists. They went out of business? Not sure, but, so long and thanks for the memories!

Back in January I was invited to tag along on a media/blogger tour of the new brewery tour service launching in Calgary, and hell yes I went! The Mrs and I have been involved/supporting the local beer community on twitter for a while, so it was both awesome exciting and an honour to check this out. Thank you Calgary Brewery Tours!!

What is Calgary Brewery Tours?

You go on a private shuttled tour of local breweries, try their beer, learn how the magic happens and meet the people behind it all! You start the tour at one of breweries and they drive you around town in a sweet limo van to the other breweries. There, you meet with them and get to take a behind the scenes tour of their operation, as well as taste everything, and learn beer stuffs and buy stuff. If you’re into the beer scene, would like to more know about how beer making works or simply want to immerse yourself in the musky brew master smell, go on the tour. If you’re looking to get shit faced, this is not a pub crawl.

On this particular tour we were to visit Craft, Village, Dandy, Toolshed and Last Best.

The tour began at Craft, with a bit of an introduction and some information as to how the tour would play out. They introduced us to one of the owners of Craft Beer Market in Calgary, Rob Swiderski, who described what they’re all about and what we would be seeing/tasting.

I had a burger with my beer but ate it without taking a picture of it. Crazy, I know. It was really good, all of the food I’ve ever had at Craft has been great. Try their weekend brunch.

Craft currently has 154 types of beer. You'll never guess which brand is their most popular haha #yyc pic.twitter.com/AKDzhQ5qbA

While we were in their keg cooler, one of the brewmasters explained how it all worked and how much work it actually takes to run the place. Everything needs to be precise, especially temperature. I was quite impressed with their setup, wish I had one in my apartment. Their cooler can hold around 400 kegs, and they have enough lines of beer to run up and down The Bow building 3 times. #drool

Alexander Keith’s IPA was their top brew, back in January. Probably still is. You guys don’t know what you’re missing! Stop getting Keiths :Þ

When we got to Village, we filed out of the beer wagon and into their tap room, which is on the second floor. It’s more of a meeting room slash Village museum than a place to drink away your troubles. 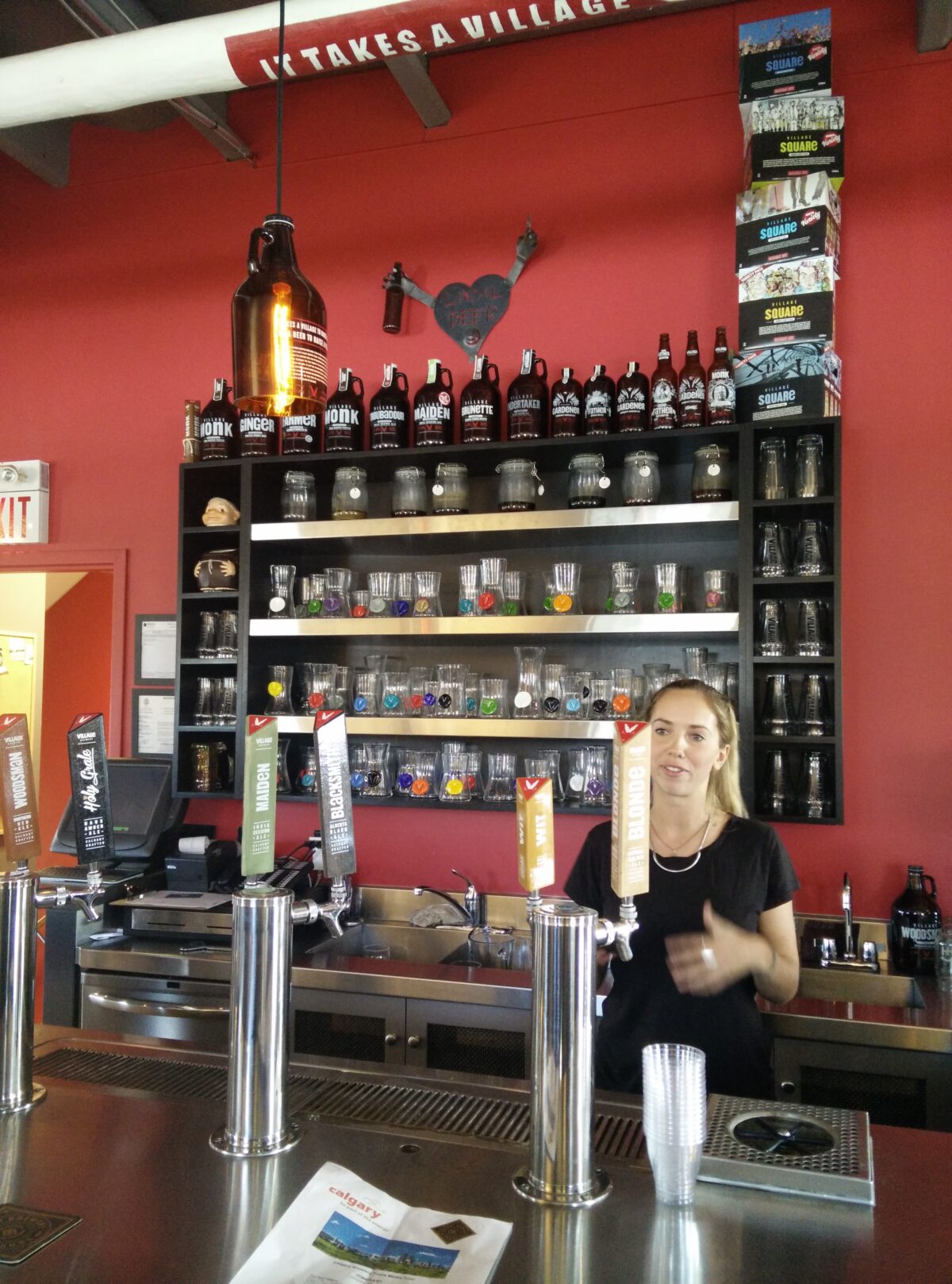 We sampled each of their brews and Hannah here told us the Village story, how they started, what those special glasses mean on the wall behind her, and who the Village idiot is. Hint: it’s you, if you drink and drive. Don’t do that.

Looking down from the tap room, you can see right into the heart of the beast and watch over the beer guys doing beer stuff.

Also in the Village tap room you’ll find a ton of different artwork by various local artists, for sale. They change it out every so often so there is always a variety of neato things hanging all over the place.

They also have some of the old bar furniture from the Unicorn pub, rescued from the scrap heap, these babies have held a LOT of food, drinks and good times.

I think the Woodsman is my favourite of their beer offering. Or the Blacksmith. I have not fully decided and will need to do more drinking.

Love me some darker beer.

Dandy is located in the NE, at the end of a row of commercial establishments. They are actually the smallest commercial brewery in Alberta! Despite what Donald Trump says, size doesn’t matter, they’re still able to supply our province with their ales. They brew in smaller batches, which enables them to try all kinds of flavours and experimentation.

Other than their front taproom, this is it. That’s all of their equipment. That’s so awesome, that they’re able to do what they do, with such a small space. It certainly doesn’t affect the quality of their brew.

Because they do make it in smaller batches however, that means certain brews will only be around for a limited time.

They do have a couple ‘core’ beers that will always be available, such as their English Pale Ale ‘Golden brown Dandy’ and a traditional oyster stout called ‘Dancy in the Underworld’ (note: it’s not made out of oysters, it pairs well with them).

Some brews are also exclusive to their taproom! This is a great reason to drop by in person. You don’t have to go on the Calgary Brewery Tours ride to do so, just go! Tell them Crackmacs sent you, for absolutely no discount.

We’ve been friends of Graham and Jeff at Toolshed for quite some time, first having met them at Alberta Beer Festivals Calgary Beerfest circa 2014. It was only a couple years ago, but it seems like forever. When you’re around Graham and he talks, time stands still. We first visited the Toolshed brewery all the way back in early 2015!

It was very awesome to see them on the Calgary Brewery Tours list.

I didn’t actually take any pictures on the tour this time round, instead choosing to share it live on Periscope, on twitter. Which I forgot to save before wiping my phone so the video is gone, sorry.

Everyone gathered in the front while Graham explained their beginnings and how they had to IMPORT THEIR OWN BEER FROM BC!! to get started. So silly, glad the rules have changed.

If you haven’t been, highly recommended checking out the Toolshed Brewing HQ, it’s located just behind Pacific Place (Franklin) Mall in the NE. Google maps directions.

The brewery has really changed a lot since we first dropped by. This picture from 2015? yeah, they have like twice as many beer silos now. 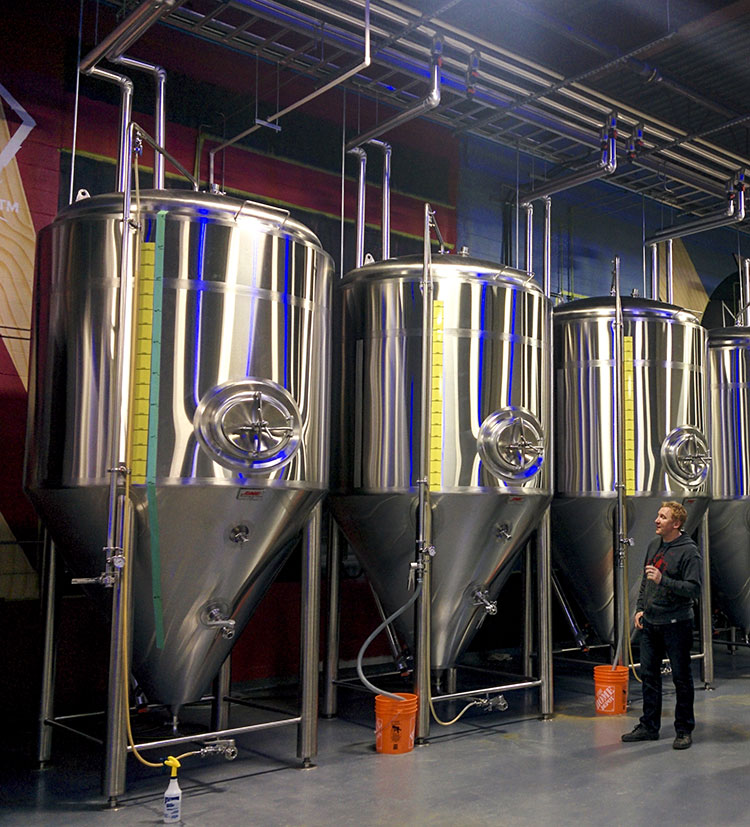 The final leg of the tour was back downtown to Last Best, where brewmaster Adam gave us a tour of their stills, explained their roots and their beerlosophy. Did you know they have a barber on site? Well, in their basement.

By this point, we were full of tasty beer samples and a little warm in the face. That meant it was time for more beer. Also some foods.

I don’t know if food is included in the Brewery Tour or this was a one-off because it was the first tour.

With each sample, Adam explains what’s in it, how they make it, what to expect from the taste. The caramel latte is a dangerously easy beer to drink. You have been warned. My favourite of their brews is There Will Be Porter, a nice dark ‘no bullshit’ malty English ale.

This was the end of the Calgary brewery tours.. tour, which was bittersweet. Thankfully Last Best is located downtown so I was easily able to get home, however they did offer to shuttle everyone back to Craft, where we started.

I really enjoyed going on this tour. Thanks again Calgary Brewery Tours for the opportunity and to all of the participating breweries and establishments involved!

10 ways how not to be an asshole on Calgary Transit