Every 6 months in Calgary, Co-op Wine and Spirits puts on an event called Grape Escape in the BMO centre, where rows of tables and booths are set up for beer/wine/cider/spirit producers from all over the world to showcase their products for you to sample, enjoy, and learn about. Despite the name, wine only makes up a portion of the show! There are more than enough beer and spirit vendors with samples, including food, for everyone to find something they enjoy. As you would imagine, this is an 18+ only event.

For the Grape Escape, there’s no need to purchase sample tickets on top of the entry fee. When you purchase entry, you’re given a hand stamp, a sample glass, and sent into the BMO hall.

The event is 4 hours long, which should be plenty of time to use up your stash, so long as you pace yourself. Cheese and bread plates provided by Calgary Co-op. I have no idea what kinds of cheeses they were, but they all tasted great and complimented the warm fuzzy feeling quite well. I’ve heard wine and cheese go together. 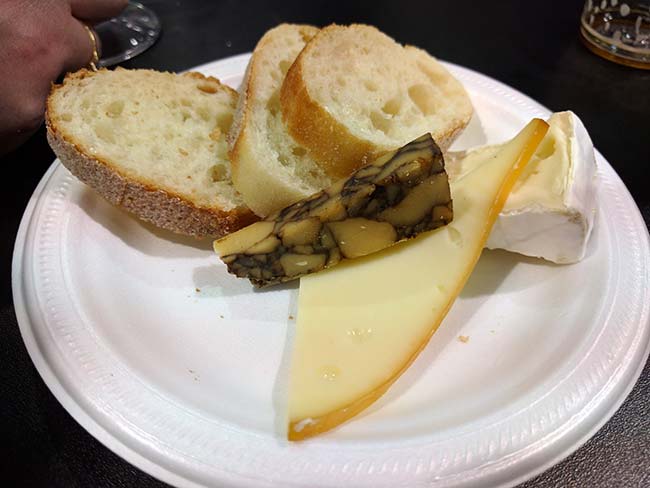 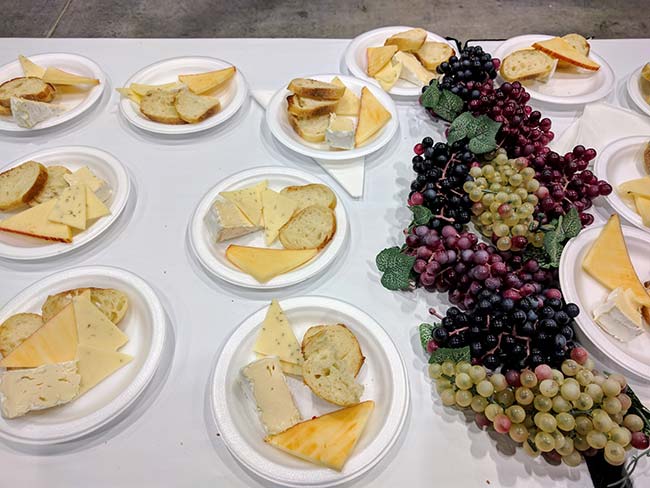 Calgary Grape Escape – Get Your Drink On

My first stop, at any event, is Toolshed Beer. We’ve been friends of theirs for a long time, and I love their beer. We went on a tour of their brewery back in 2015, check that out here. If you haven’t tried their brews, I’d recommend starting with Red Rage. FlatCap Stout is really good too. I’m a big fan of darker beers. Grape Escape began with a pour of FlatCap Stout. I’m not really that good with explaining the intricacies of beer and their taste profile, I just know what I like.

Got to try a couple things I had been wanting to try.

From Eau Claire Distillery, their Prickly Pear Equinox ‘gin’, and Village Brewery‘ seasonal Neighbor beer, a pale ale. The ‘gin’ is apparently not technically a gin, due to the way it was distilled, but it’s pretty close – from my understanding. Marty, the guy in the picture, is a walking wikipedia page on all things distilled. He dropped all kinds of knowledge as we were standing there and I only picked up a little. The Prickly Pear went down smoothly, and tasted like pears. It had a nice warm feeling afterwards in my chest. Really liked it. A nice change up from typical gin or vodka. Their products are great, and are from Alberta, which is awesome.

Villlage Brewery Neighbor was somewhat hoppy, not sweet, and only a little bitter. Some people don’t like drinking IPA’s because of the bitterness, but this is one I’d recommend. It’s actually called a Canadian Pale Ale. I don’t know what a Canadian Pale Ale is compared to an India Pale Ale. Like I said, not super educated with this stuff. Neighbor was good stuff and I’m certainly going to pick some up when it’s available in stores. Really love their Blacksmith beer. Looooove dark beers.

From Beaus Brewery, the Tom Green Milk Stout was really good. It was the only brew of theirs I tried (I was trying to visit almost every booth, and I had to leave Grape Escape early… boo). It had kind of coffee/chocolate flavours to it, without being overly sweet. I actually have no idea what a milk stout is. I guess they use milk to brew it? Knowing Tom Green, it’s probably raw cows milk. I’m glad it was at Grape Escape but it was one of the beers I had been wanting to try after seeing it in Oak and Vine a while back. Fun fact: Tom Green blocked us on twitter because I once said the older Tom Green stuff on Comedy Network was better than the Tom Green stuff on MTV. I guess he’s kind of sensitive? Haha, oh well. No hard feelings, he was a big part of my teen years. Used to record his stuff on VHS and bring over to my friend Chris’s house and we’d all watch it laughing until we cried. Shout out to Glenn Humplik! Anyway…

Like I mentioned, I’ve been to Grape Escape before. This was my third time going, and certainly won’t be my last. The first Grape Escape was a few years ago with a slightly different format. There were no drink tickets, you just got in and walked around getting hammered off samples. Since then the AGLC has forced Co-op to make Grape Escape a sample ticketed event. Wonder what the point is? Control how much people drink? Probably something like that.

Anyway, the previous Grape Escape was actually only just back in November. Same setup, try various drinks and meet people and have good times. 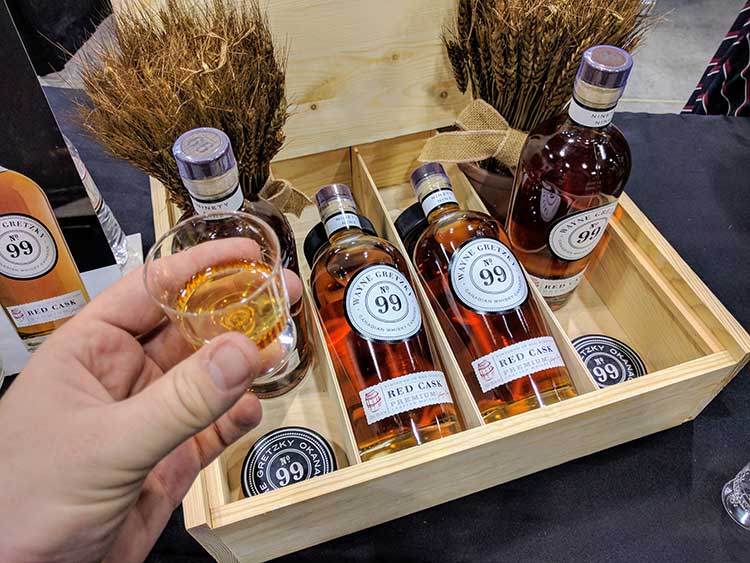 One of the Whiskeys I sampled was the Wayne Gretzky No 99 Whiskey. I was really excited to try it, as I LOVE whiskey (Jack Daniels being my #1), and it’s one of those more pricey things I’ve typically not buy, so I stood in line and waited for my sample. Bottoms up!

It was terrible. I don’t remember specifically why it was bad, just that I was surprised as hell. I mean, the Gretzky name doesn’t necessarily mean it’ll be good bad by default, but you’d assume it would be premium and of quality. Nope. I did not like it. I don’t think I even finished my sample.

Thankfully that was the only thing I didn’t like. 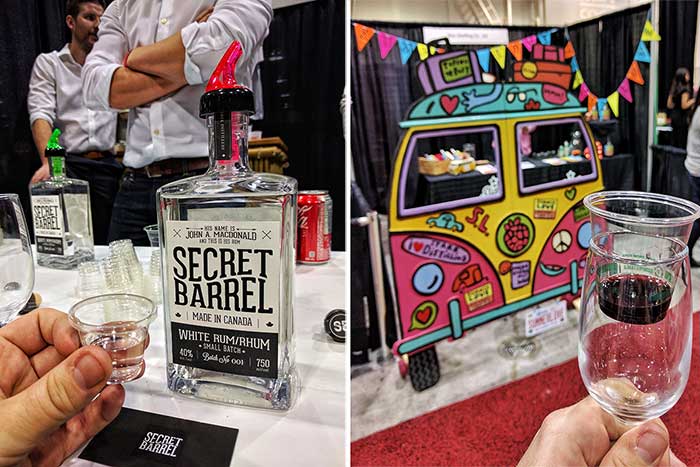 Secret Barrel white rum and Starr Distilling Summer Love raspberry vodka were both decent. The raspberry vodka rings in at only 30% alcohol and it has a STRONG raspberry flavour to it. It might even be too much to drink straight, it’s so strong. Unless you really love raspberry. Goes really good in cocktails. With the Secret Barrel rum, I’m not really a rum guy, but I liked it. When I tweeted that picture of it during Grape Escape November 2016, I accidentally referred to it as vodka. I felt pretty stupid. So from now on, I might just call it vodka. 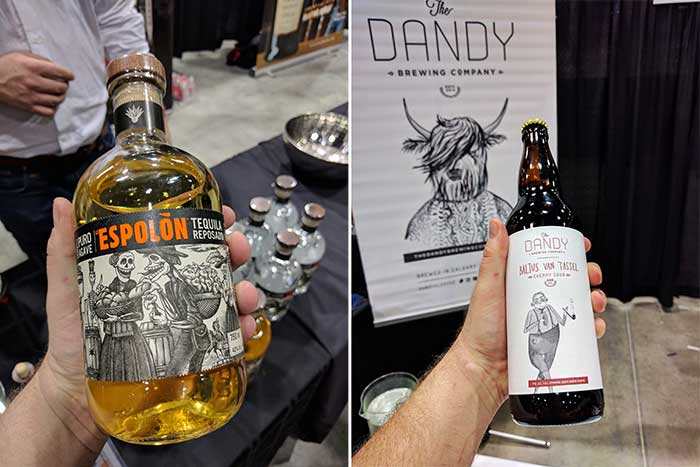 As well, the cherry sour from Dandy Brewing Company was fantastic. They make small batch beer, so their seasonals change frequently. I’m not sure if it’s still available. Their Oyster stout is really good too. I don’t remember anything about the tequila on the left, but it has a cool label and colour.

It’s a really decent event, check it out. Co-op puts on a good show. The atmosphere is very fun and friendly, there’s staff all over the place making sure everything stays clean and tidy, and there are even police officers throughout, keeping order. In addition, they have a tasting seminar which is headed by one of the Co-op sommeliers, giving advice and information on food pairings and how to drink properly. Grape Escape has something for everyone – unless you don’t drink. Not sure why you’d go in that case. Maybe just to network?

A Guide to Mastodon. A new decentralized Twitter clone.