Earlier this year I was invited by Calgary Brewery Tours to check out their new service …. touring Calgary breweries, and it was awesome. They’ve recently put together a new local tour and once again invited me to attend, you bet I said yes. Cleared my busy schedule (lol) and off I went.

Before I get ahead of myself, just wanted to mention we (I and the Mrs) sort of took the summer off from blogging. You may have noticed (if anyone actually reads this?). We spent the last two months or so doing outdoorsy stuff, camping, fishing, spending time with the kid, Stampeding and so on. Even a little traveling! We went to Edmonton and visited Kikki Planet, and hit up West Edmonton Mall. It was a blast, the water park is even more fun now than when I was a kid, it has one of those free unlimited coke machines. The Mrs actually went to Edmonton twice, once for West Ed/Planet and once to stay at the Fairmont MacDonald hotel for her birthday. She stayed on their gold floor. They honoured her request for Nicolas Cage photos in the room, and then some.  So jealous. Anyway! on to the beery goodness.

Our day began just before noon at Trolley 5, in what was once Melrose cafe and bar along 17th avenue in the southwest. I’m not sure what existed in the space before them. Melrose still exists, over at Cowboys Casino. 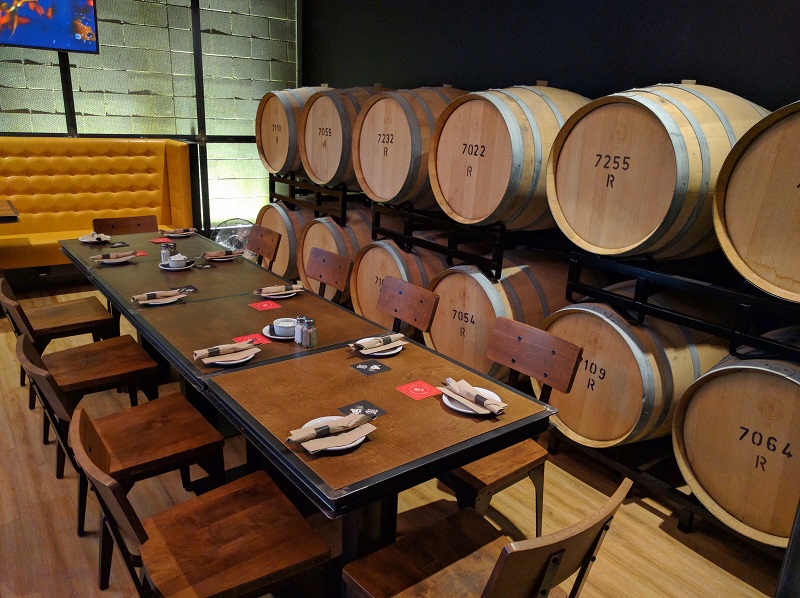 Once everyone arrived, our tour began in this room with a bit of an introduction from Ernie Tsu, one of the owners. He explained about the history of 17th avenue and the location, and how their name came to be. 17th avenue used to have a trolley car system that would shuttle people back and forth, aptly named Trolley Five. It was in operation until 1950. 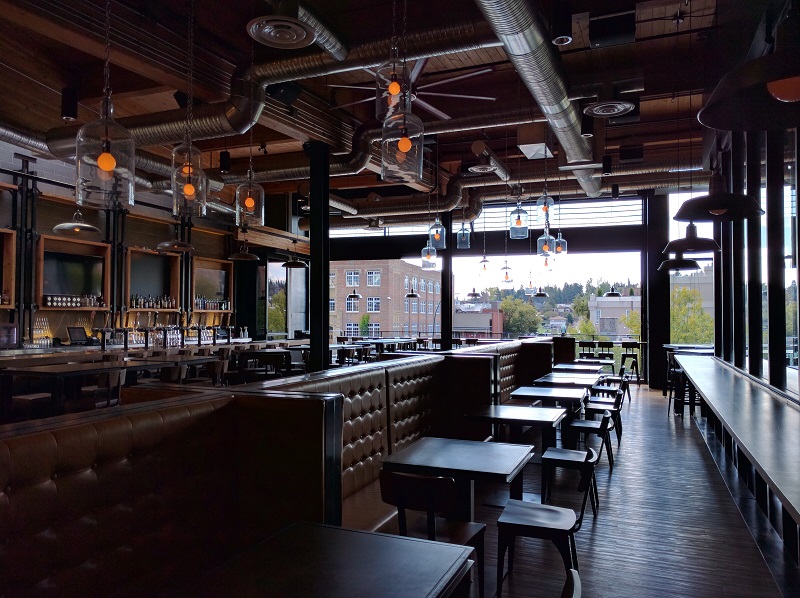 The space upstairs, it’s absolutely beautiful, and looks out over 17th avenue. I don’t know how many people they can accommodate, but it’s got to be a lot. Probably fifty hundred. 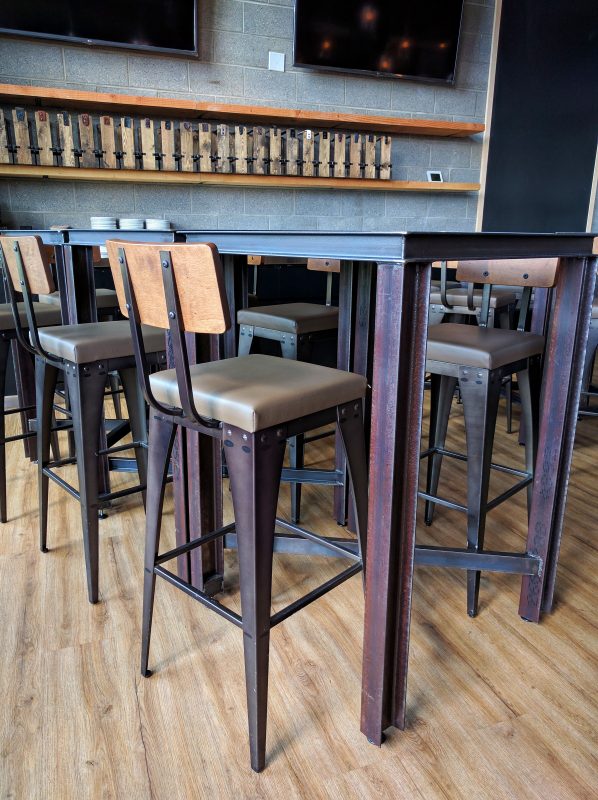 Even their tables and chairs are sexy. Everything was put together with a vintage/retro trolley car theme in mind. Love the detail they’ve put into everything. 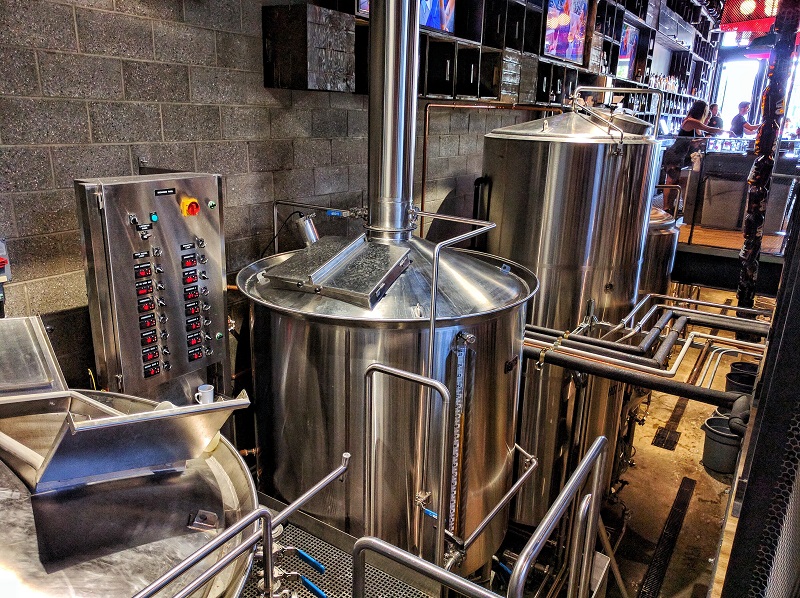 One of the neatest things is the growler conveyor they have throughout the building. I believe Ernie said it has something like 250 growlers just moseying through the place? Need one of my apartment, and some way of filling them. 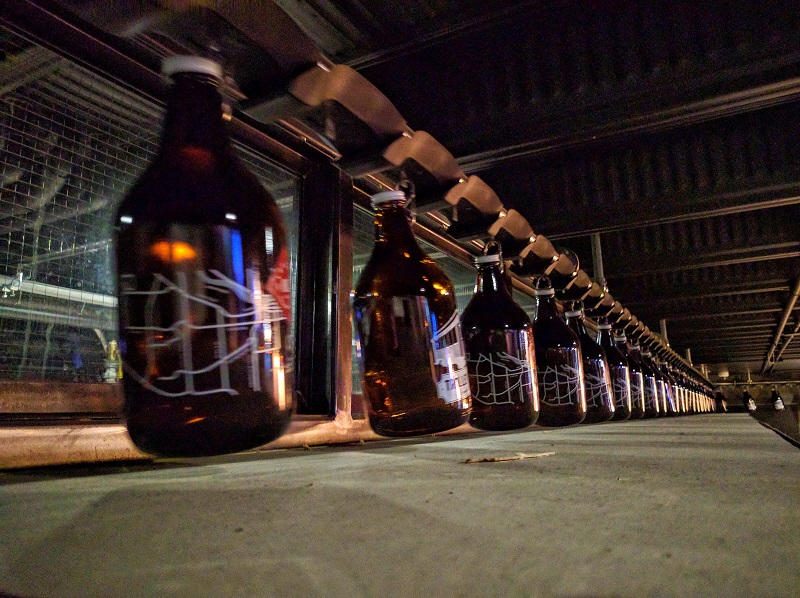 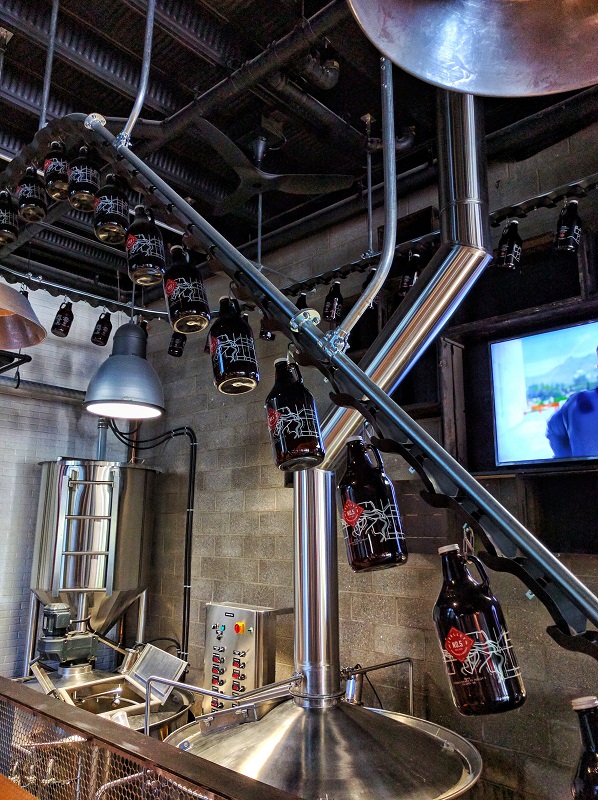 Something interesting, when Trolley 5 were still in the process of renovating and building their restaurant, they actually partnered up with the boys from Toolshed Brewery and Big Rock to begin brewing and honing their skills to get some beer made. Beta beer, if you will. Now that their building is finished, everything is brewed in house.

Note: if any brewers in Calgary ever want to drop off some beta beer kegs for me to test, I am ready willing and able. My body is ready. 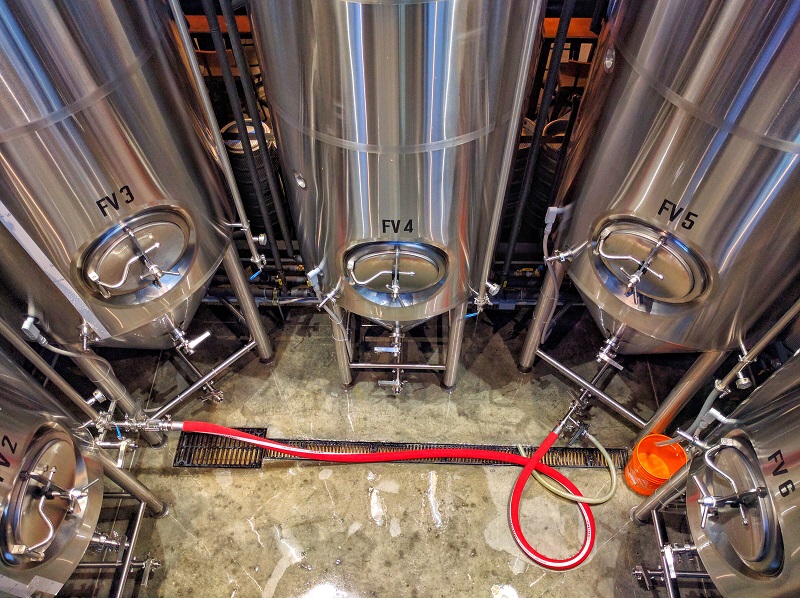 We went through every part of the joint, except for the kitchen or washrooms. I bet they have really cool Trolley themed toilets. Next time!

With this tour, food is served up at the first stop, so in addition to some excellent suds, we got to eat too. King for a day! 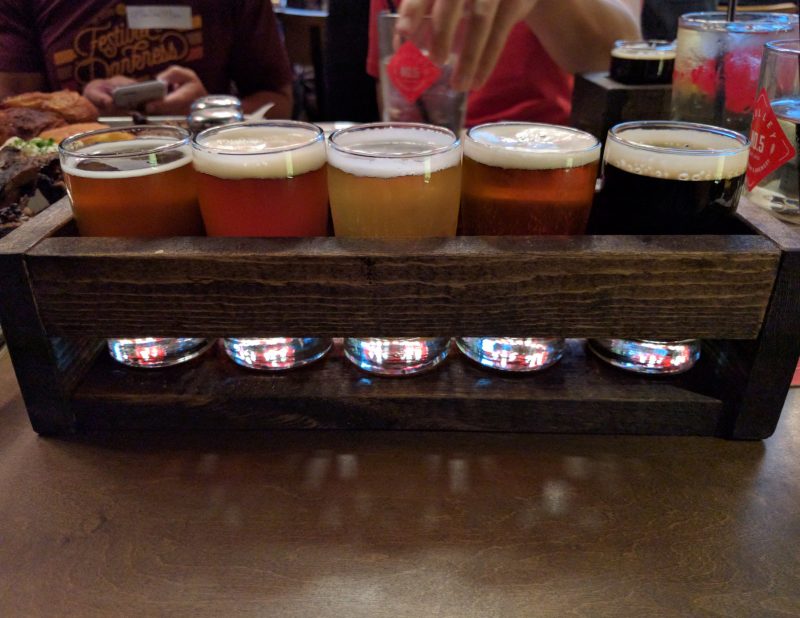 Ernie actually stopped us before we started, explaining how to drink them properly. Starting with Hey Porter, it went like this.

Doing this sets up the pallet properly, giving your senses the full Monty of beery goodness, so to speak. I had no idea I was doing it wrong all my life, but it seemed to work. I really loved their porter, it’s made with coffee and chocolate. Try it if you’re at Trolley, if you like darker brews.

Below is their Pit Masters Platter. Half a chicken, beef brisket, ribs, pulled pork, corn, cornbread, some kind of tubed meat etc. It was a perfect belly filler. There was also a Caesar salad to the side, but come on now, nobody cares about salad. You don’t make friends with salad.

Once we were finished stuffing our faces and wetting whistles, our driver showed up and off we went to the next place.

Touring Calgary breweries wouldn’t be complete without Wild Rose, they’ve been in the game for 20+ years in Calgary. 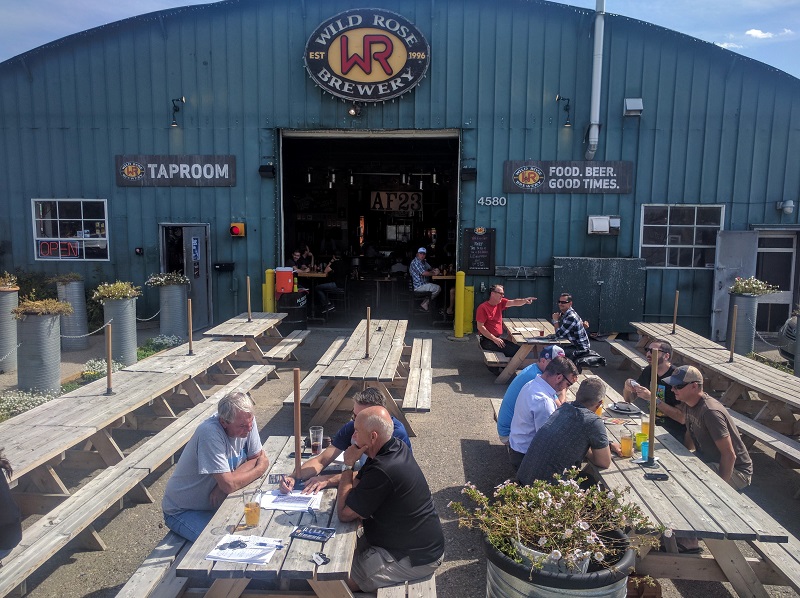 The Wild Rose taproom is located up at the Currie Barracks, housed in building 23. The front half of the building is where people meet for beer and food, the back half is a brewery. It’s not their main facility.

Even though it looks a little plain on the outside, the front restaurant is filled with charm and is a wonderful atmosphere to get some socializing in, before heading back to work. Having just eaten at Trolley 5, we didn’t stop for food, but it smelled good. Here’s their taproom menu. 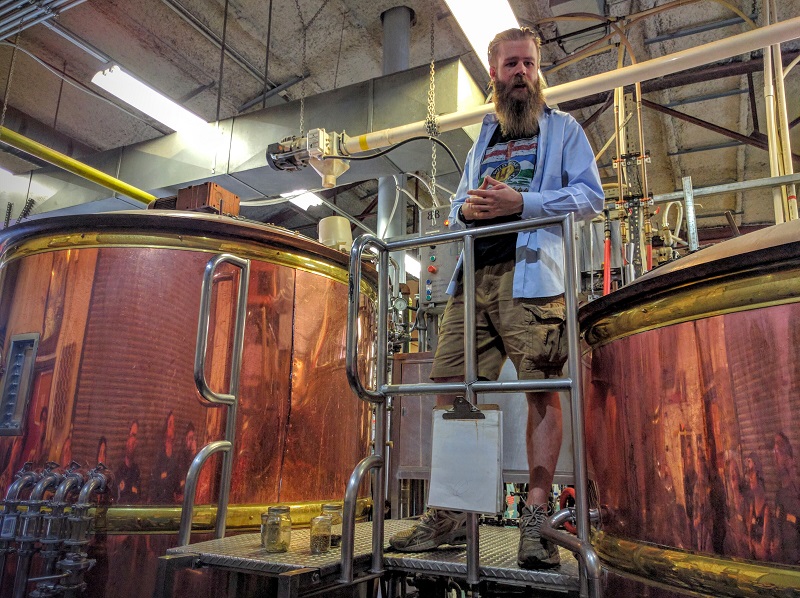 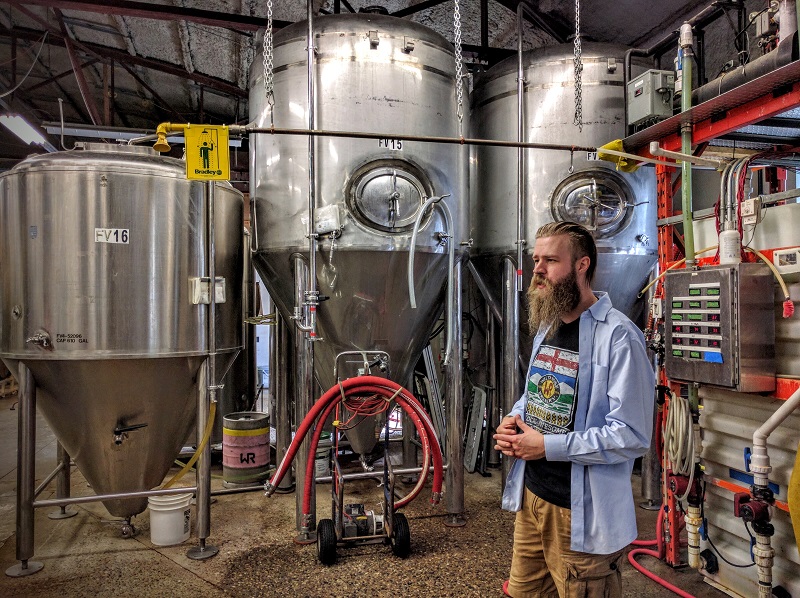 The tour officially started with Jason from Wildrose here giving us the rundown of their facility.. and how beer is made. Not just a couple interesting points, he literally explained the process from beginning to end on how beer happens. Was not expecting that, it quite interesting, though I admit I don’t really remember all the details. Basically it only takes 4 ingredients – barley, hops, water, and yeast. And time. Aging is important. 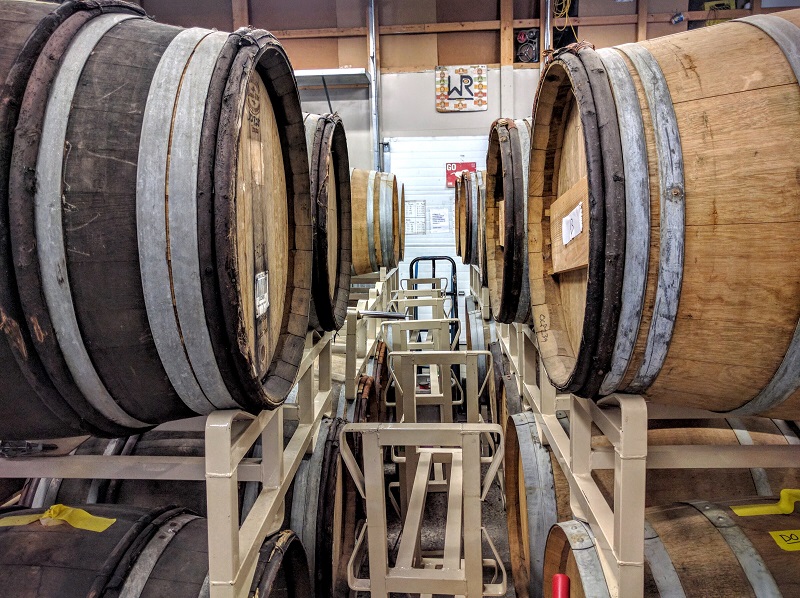 These barrels are filled with beer, and are aging peacefully until the time is right. Fun fact: when filling them, beer spills out all over the place until such time as the wood begins to swell and seal it off. Barrel aged beer is a little more expensive because of the investment of time it takes to make it properly. Don’t know what was inside the barrels. Magic beer, probably. 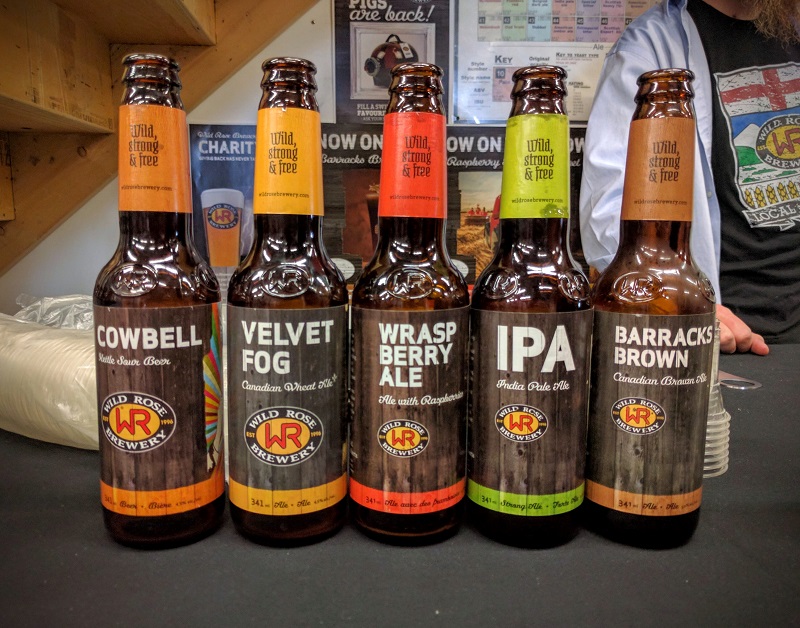 If you’re anything like me, you love trying different types of beer (and touring Calgary breweries), and have probably tried each of these a few times. I’ve certainly had my fair share of Velvet Fog, however I’d never tried their Cowbell, which is a sour beer. My mouth waters just thinking about it. I didn’t mind it actually, I recall only having one sour beer before this one, at Beerfest last year. I don’t remember who made it but it was not good. So not good. Cowbell is good and not TOO sour, certainly worth a try. Some people on the tour didn’t like it, but whatever more beer for me.

Of all their offerings I like the Barracks Brown the most. Dark beer ftw! 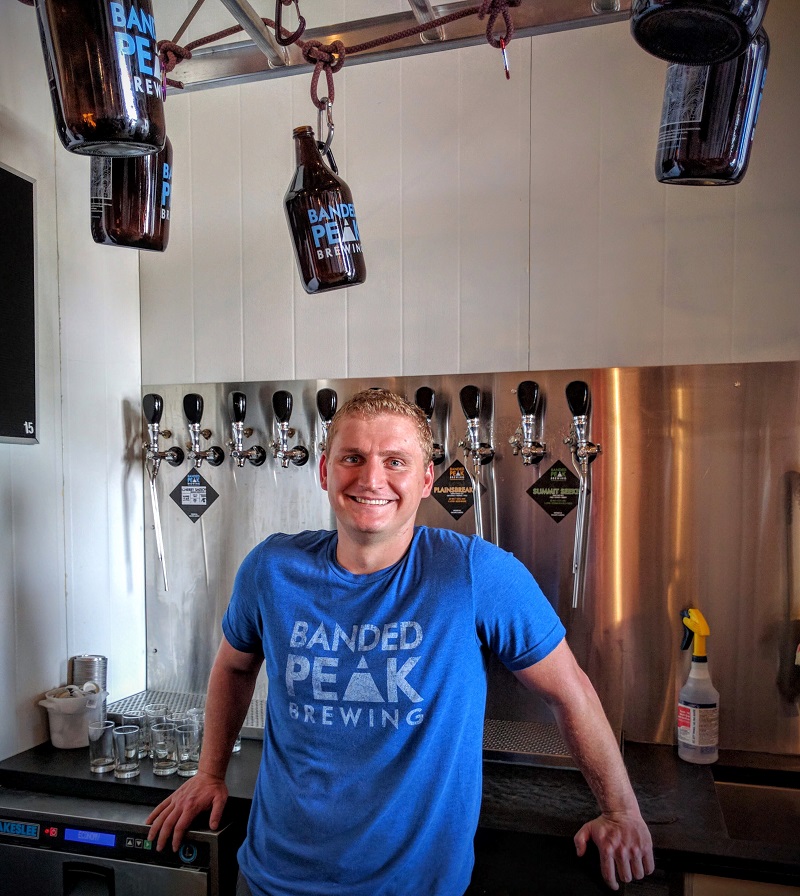 Banded Peak Brewing was next on the list, they’re located pretty close to the Stampede grounds, over by the cemeteries in a cozy little warehouse. It’s run by three native Calgarians (This here is Matthew), and they adopted their name from one of the mountain peaks west of Calgary. Dailybeer.ca has a nice write up on them from back in April, when they were first starting out.  Good read! 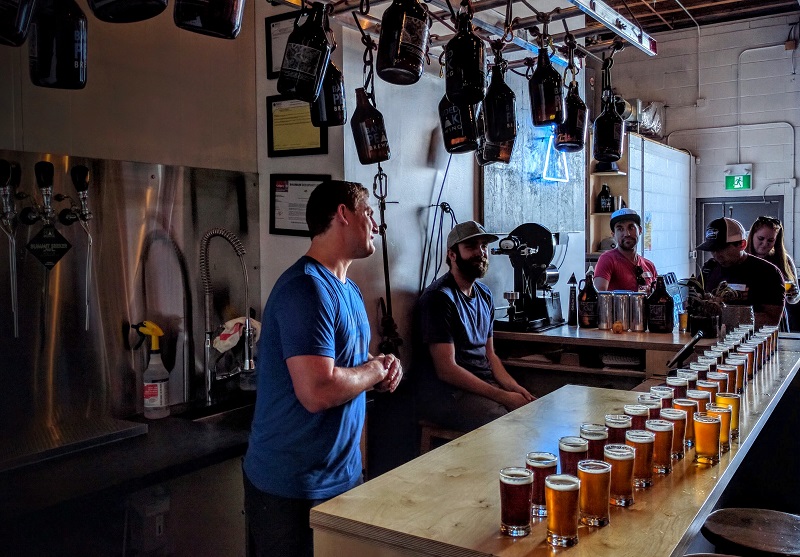 They started out explaining a bit about themselves, their brewery, and their brews – of which they have three.

Chinook Saison, Plainsbreaker and Summit Seeker. They’ve also got a seasonal Cherry Saison on tap and available at a few places around town. They’re mostly located in and around downtown. See here for a map. 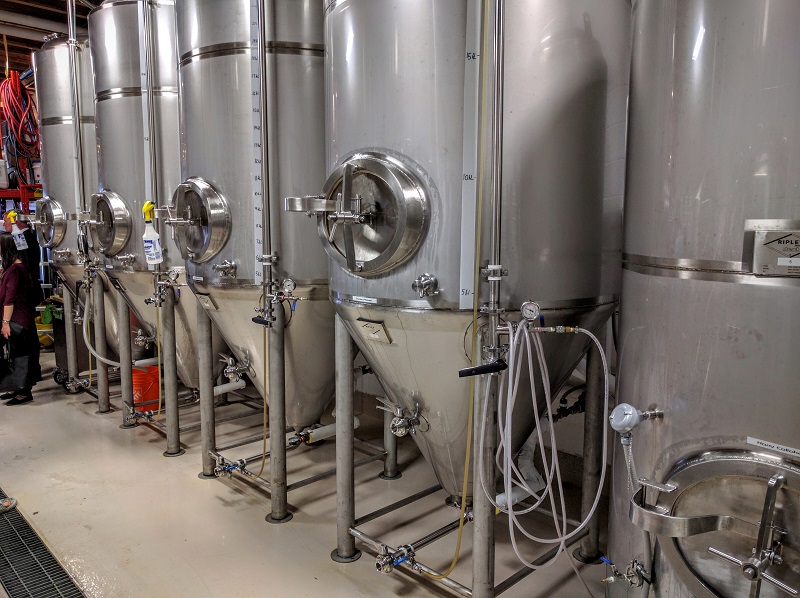 You can’t see them, but on each of the stills is a label with a name on it. Matthew said he’d buy a pint for anyone that can name the 4 movies they’re from, without checking their phone or getting help from anyone. Someone almost did! But he missed one, so no free pint.

I’m not going to give anything away, trivia is fun and cheating sucks :Þ 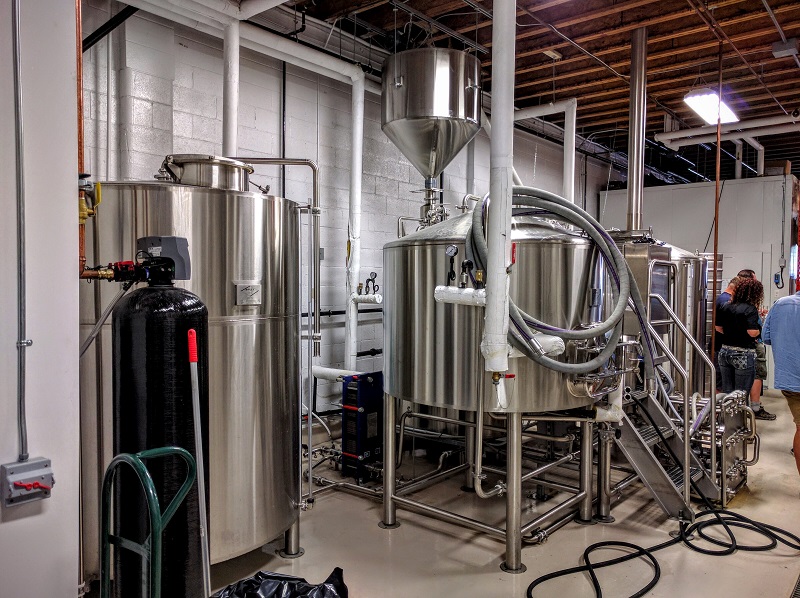 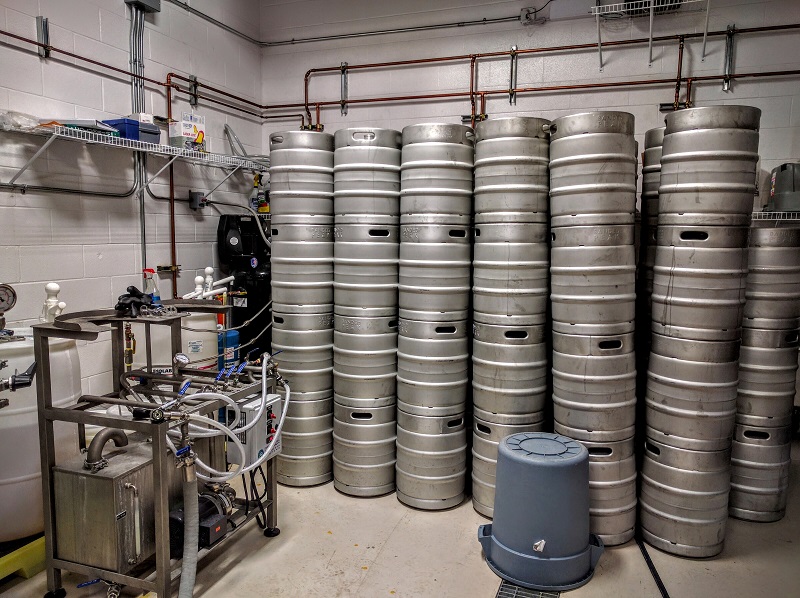 I have to say, out of all the breweries I’ve been to, theirs was perhaps the cleanest and most tidy. Toolshed Brewery a very close second.

It was a really nice visit, their beer is quite unique tasting. I actually bought a 1L can of Summit before leaving, liked it that much. $10 each. Wish I had more. I need to go touring Calgary breweries more often. 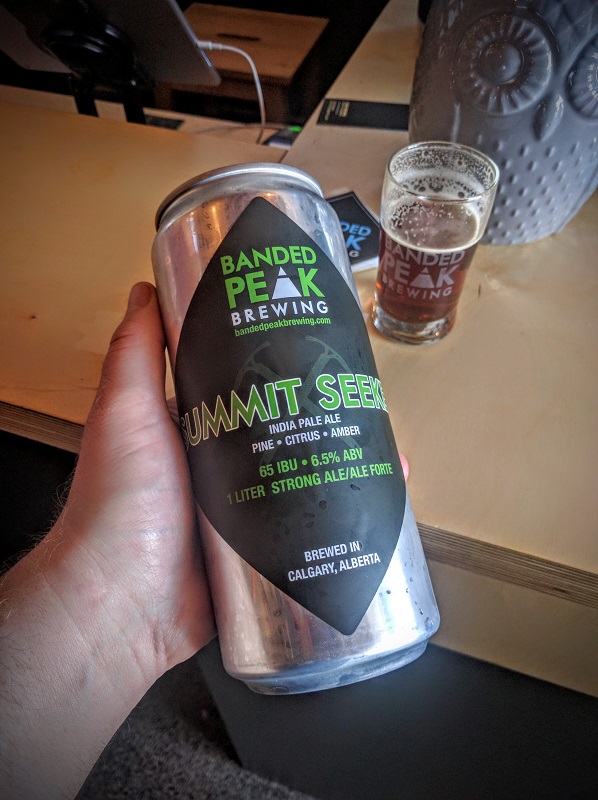 Cold Garden.. isn’t finished yet. They’re still building the place so we weren’t able to stop in and check it out yet, or sample any of their tasty (I assume?) beer. Until they’re done, Brewsters Brewing Company is substituting on the tour.

The final leg of the tour was Brewsters Brewing Company, down on 11th ave and 8th st sw, nice and close to home. Which is good! Because I had to run off a little early from the tour to make an appointment. I had the pleasure of drinking down some wonderful beers but did not see any of the equipment 🙁

Their brew master Rob regaled us with tales of their brewing, and talking about the companies beginnings in Saskatchewan and expanding out west. Brew masters aren’t just pretty to look at, they’re full of so many stories and lots of info. 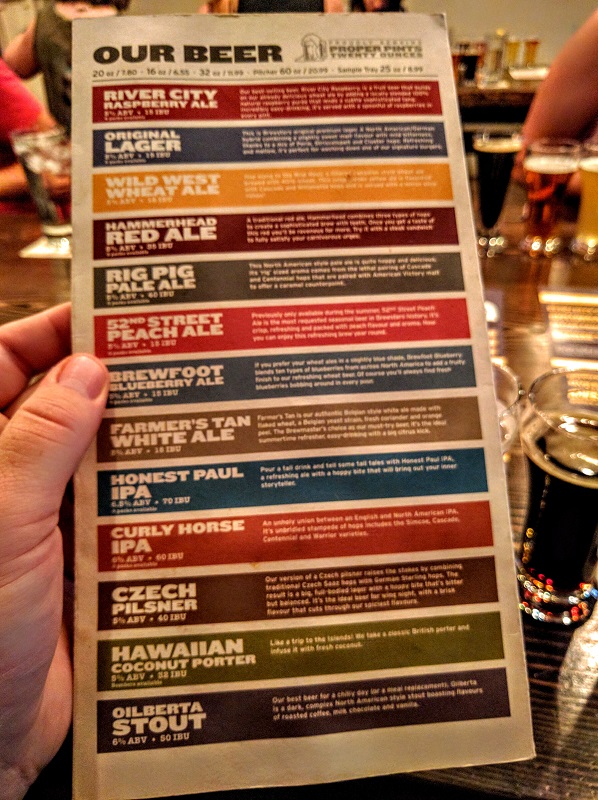 And as you can see, after being chauffeured around the city and now full of beer, my pictures get progressively worse. Not a clear shot of their beer menu. Oh well, you can see their names 😀 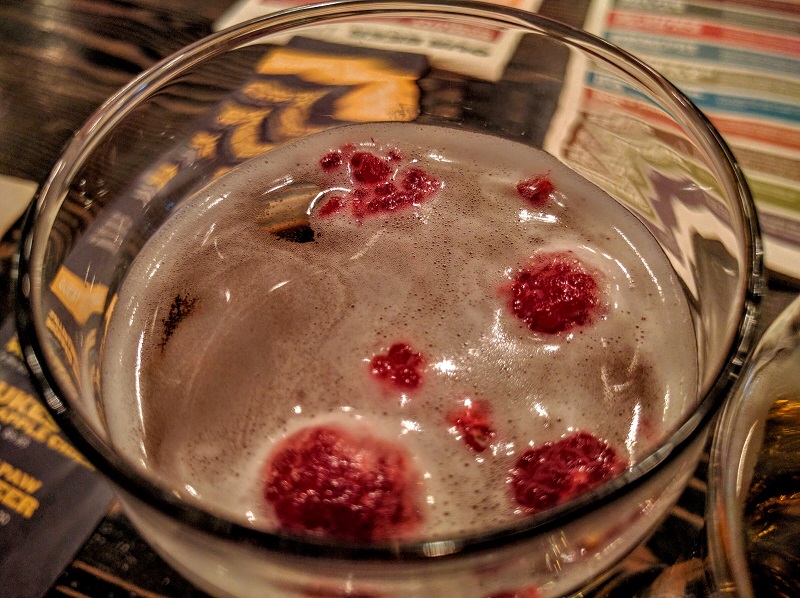 Their River City ale had actual raspberries in it, which was really good, if you like raspberries. If you don’t, you’re some kind of monster. 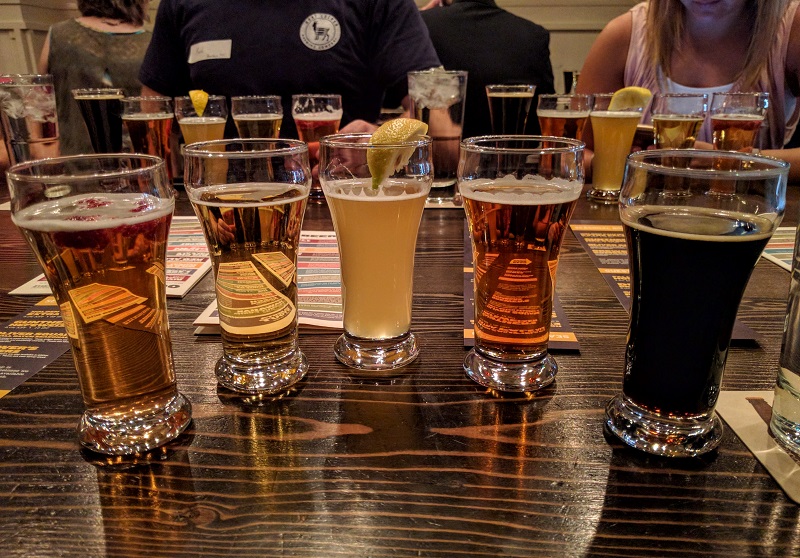 My favourite Brewsters beer, and perhaps of the entire tour was the Hawaiian Coconut Porter. I’m not even a huge coconut fan but damn it was so good. Dangerously good. Very easy to drink and nothing like you’d expect from a porter. Try it! Pretty sure Co-op sells it. 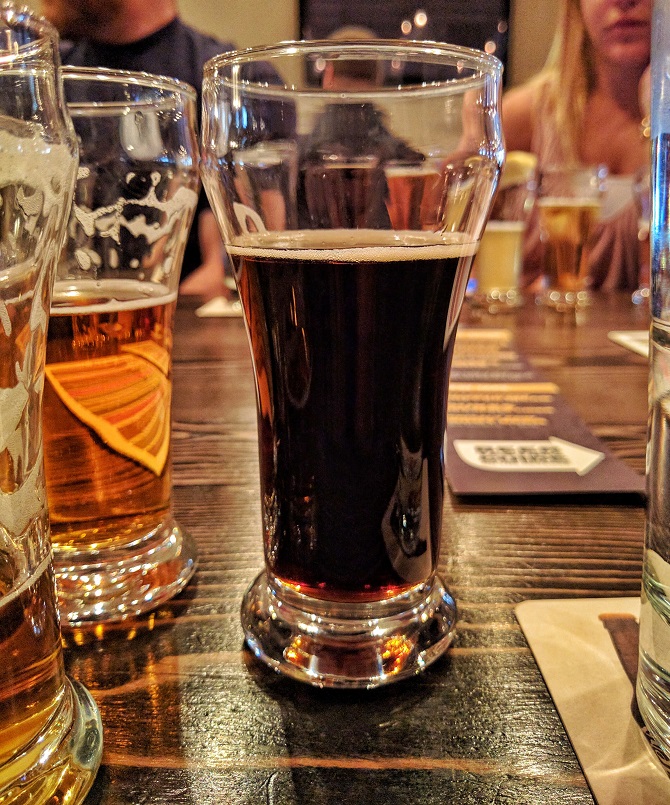 That’s it! Another awesome tour in the books. So happy the AGLC have started coming to their senses and are changing their rules to better serve Albertans and allowing brewpubs to exist. There have been so many rules and restrictions placed on brewing in our province, it’s a wonder we’ve had any beer at all. Touring Calgary breweries is a great way to spend a day, it’s really awesome we’re getting so much more of it happening.