The Best Pokéstops in Calgary

PokémonGO is a cell phone game where you walk around in the real world catching virtual Pokémon, which is strangely addicting and also super fun to do. PokémonGO was unleashed upon the world in July of 2016 to some incredibly huge coverage. People went outside en-mass all over the world trying to catch them, often to the dismay of drivers or people trying to bike through city parks. Pokestops are various ‘stations’ placed throughout the city where people can collect items, battle (if it’s a gym), and other things. Sometimes they can be hard to find though! Here are some places I recommend.

If you live out in the suburbs in Calgary and you’re playing PokemonGO.. it’s a less than stellar experience. The non-downtown Pokestops in Calgary are few and far between and you’re likely going to have a hard time keeping Pokeballs in stock.

If you live downtown, you’ve had a much different experience. Pokestops are everywhere! There are so many clusters of stops, it’s incredibly easy to fill up on Pokeballs and potions without having to go far. Most of all, Eau Claire is especially good.

A few spots I recommend; 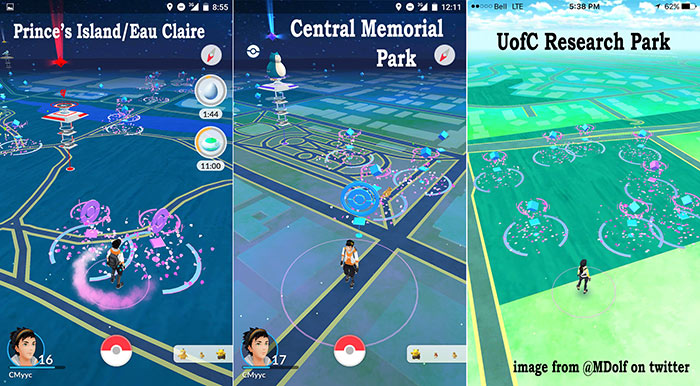 Due to the sheer amount of people in the area, someone is usually lighting up the lures in these spots. You may notice it in person as there will be 50 people standing around.. it’s quite something to see.

Catch a Pikachu as your starter Pokemon

This only works if you’re new to the game sorry. Basically, when you’re presented with the 3 initial Pokemon to catch, Bulbasaur, Squirtle or Charmander, you simply walk away from them. Do this 4 times and Pikachu will also show up alongside them! Pikaaaapika! Here’s a video showing how it’s done.

Gym battles aren’t as straightforward as you would think, in my opinion anyway. You need to be level 5 to battle or even access a gym. Once you are level 5 and do hit up a gym, you’ll be presented with 3 teams you can join. Valor, Instinct, Mystic. It doesn’t really matter which team you go with, but we rolled with Mystic so they’re the best 😀

Once your ability blocks are full, rather than just tapping, tap + hold to use the secondary attack.

Extend your battery life while playing Pokemon GO in Calgary

PokemonGO demands you walk around with your phone out, screen brightness is pumped to full, and it sucks your battery dry. Even those of us with beefy batteries don’t last very long without a USB backup while out and about. PokemonGO does have a ‘battery saver’ option within the settings, but it only dims the screen if you flip the phone upside down.

There is a solution.. for Android only. GO Extender. It works in a couple of neat ways. It’ll turn the screen black (disabling the GPU) if you hold your phone upside down, and/or use a ‘proximity sensor’ (using the selife camera) to turn the screen off while it’s in your pocket. Most noteworthy! Not only does it save battery life, while it’s in your pocket, eggs will still hatch! Your steps will still count.

Also? it disables the touch screen so you won’t accidentally tap out of the game or bring up other apps.

Here’s a video of how it works, from Phandroid.

Get a USB Battery

If you’re going to be spending a lot of time walking around catching Pokemon in Calgary, you’re going to want a solid USB battery back up to keep you charged the whole time. Anker makes really high quality stuff and it’s not overly expensive either. Avoid getting those little ‘pill bottle’ shaped tube batteries – they’re tiny and they don’t last. You really get what you pay for with USB batteries.

The Pokemon GO Calgary subreddit used to be really active when the game launched, however now that the novelty has died down for most people, it’s rather quiet and not very active.

The subreddit might be dead, but the Facebook groups are alive and well! And you have a few to choose from.

If you’re not careful, PokemonGO will takeover your life. You’ll get out more, lose weight, make more friends and have fun doing it the entire time. Best stay away.