Note: we’ve been on multiple ride alongs, click here to see them all!

I wanted to be a police officer at one point in my life. I even went to a school specializing in being a security officer that was taught by a former RCMP officer. It was one of the coolest things I’ve done in my professional education. Obviously I didn’t end up becoming a Calgary police officer but I did get to tag along with a friend of mine on his District 6 shift!

Starting my @CalgaryPolice ridealong 🚔 at District 6 headquarters. Here are the fallen officers from 6 😢 #cmpol #yyc pic.twitter.com/T8NaIay239 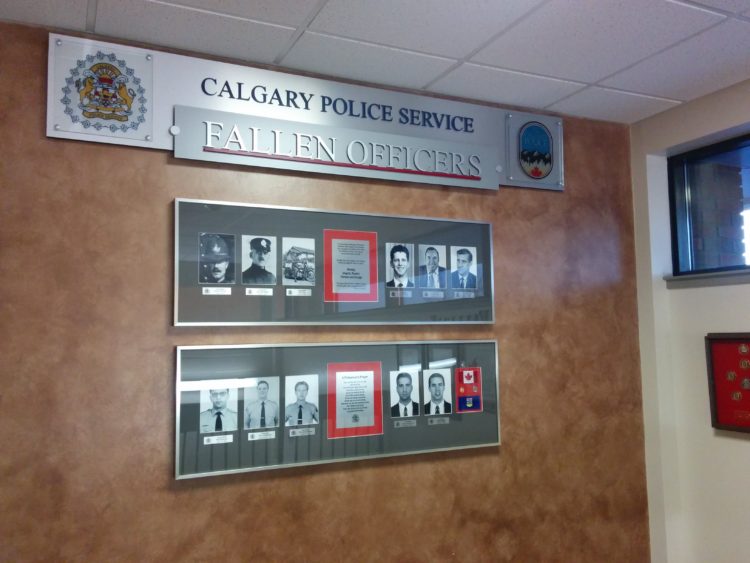 I got to hang out in the break room while Officer Martin got into his uniform. Guess what’s in a police vending machine? Not donuts. 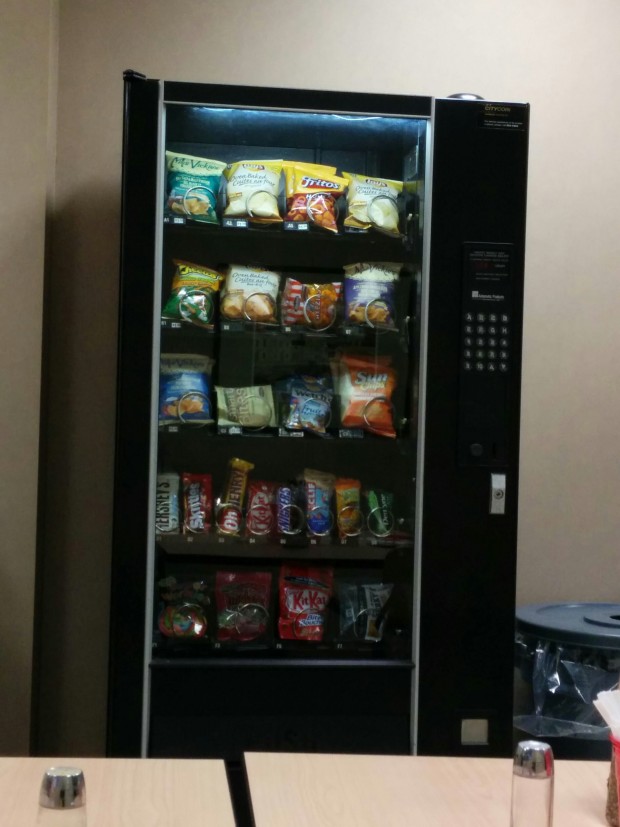 We began by going to the equipment room to sign things out for our shift. 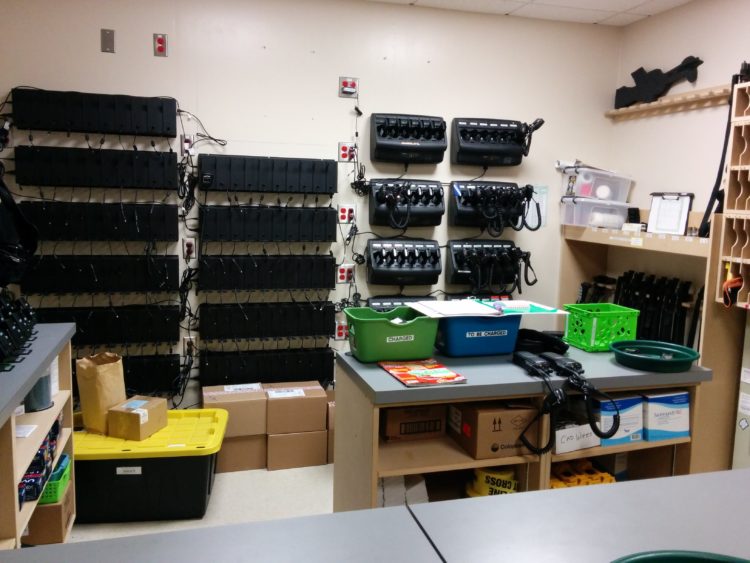 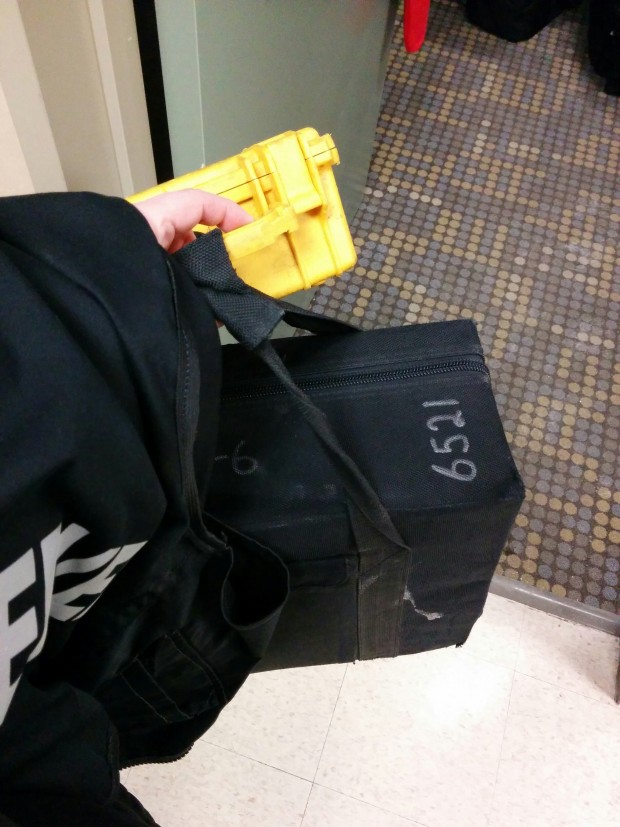 Equipment is tested before we leave to make sure it will be ready to use if and when it is needed. Here we see a quick test of a taser.

I had my own radio with an ear piece and this spiffy observer vest. For the rest of the night people assumed I was a supervisory officer of some kind as I attended calls. Of course I didn’t correct anyone 😉 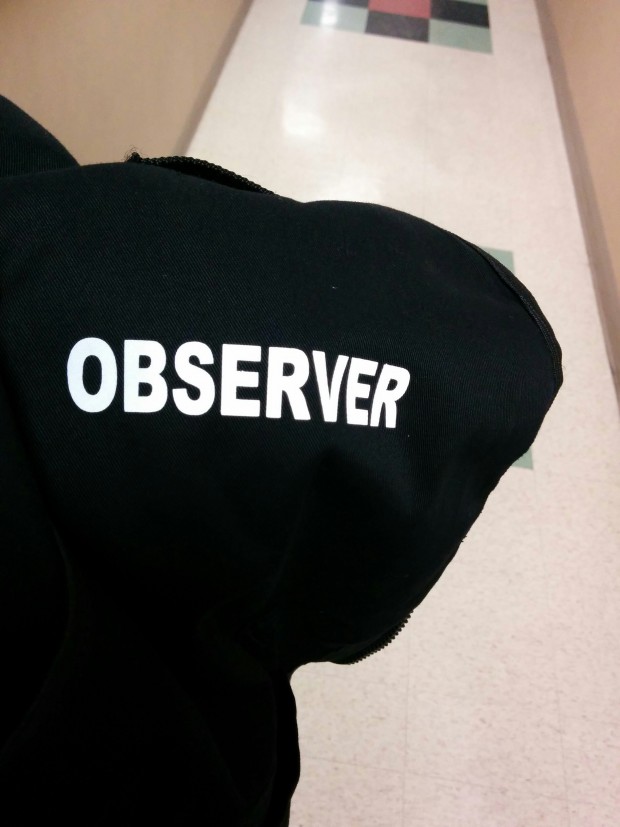 We signed into the MDT, Mobile Dispatch Terminal, and logged our equipment and our details. POCMAN stands for Patrol Officer Casualty MANagement. It is training and equipment for life threatening medical situations while waiting for EMS to arrive.

The MDT, Mobile Dispatch Terminal, showing us where everyone in the District is currently. Our info hub! #cmpol #yyc pic.twitter.com/PYLxhr8vvZ

This was pretty funny. The District 6 office is right beside a retirement complex. I can only imagine how pleased those folks are to hear this a bunch of times a day.

Before every shift lights, siren, and speakers need to be tested. The neighbors next door must love it! #cmpol #yyc pic.twitter.com/dmrZgkWxJt

Our shift was going to last until the early morning hours so we headed to a nearby coffee shop where we met up with some paramedics with Calgary EMS. We had a quick chat about what they wanted people to know, and what kind of calls they dealt with most in the downtown core.

If you see someone lying on the ground, don’t just walk by. At least make sure they are breathing and out of harm’s way – Paramedic 1

If it’s important enough for you to call 9-1-1, it’s important enough to stop at the scene if it is safe to do so. If someone calls in to report someone on a bridge rail as they drive by, and that person is no longer on the rail when emergency services arrives, it changes the scale of the response and the search required. We don’t know if that person walked away or if they jumped. – Paramedic 2

Met up with EMS to chat. #1 request from them to 911 callers: Stay there. Don't drive by & call it in. #cmpol #yyc pic.twitter.com/EyOhAHMzMt

Our first call of the night was to a welfare check. A male was sitting in a neighbors car warming up when we arrived. He was intoxicated and in tears as he shivered in the back of the car. The way he told it, he went home with a woman from a bar and, while he was sleeping, he was assaulted when the woman’s boyfriend came home to find another man next to his girlfriend. He was tossed out in the cold without his belongings and he tried for an hour to get someone to help him before a neighbor took pity on him and allowed him to warm up in his car.

Cst. Martin tried to reach the occupants of the home but there was no response. I was impressed with how police use their resources. Neighbors freely volunteered information which was validating everything that was coming up in the CPIC search in car. In the end we dropped the gentleman off at his destination of choice and advised him to call police if he needed assistance retrieving his belongings when they were home.

We then received a call about a truck that had been left running with the keys in it, which in turn was stolen. While we were on our way to the call the truck was found so we were called off. There was also a call for a fleeing shoplifter but HAWCS was already in the area and assisted in an arrest.

On our way to a call in progress, a shoplifter. Taken into custody with assistance from #HAWCS #cmpol #yyc pic.twitter.com/Yn5jKt9LG1

Instead we headed to a call about a car stuck in a little ditch on the side of the road. It was called in by someone who was driving by and the information given was that there was a collision with 4 people in the car who were injured. Because of that 3 firetrucks, 1 ambulance, and multiple police cars were sent to the scene. The occupants were fine, just stuck and needing to be pulled out. This illustrates perfectly the importance of correct and current information so that emergency resources are properly dispatched.

Next call: car stuck in the ditch after going off the road. Called in by someone driving by. #cmpol #yyc pic.twitter.com/xDsL6k9dFK

Next came a duress alarm from the industrial park. It turned out that a security officer put in the wrong code, triggering the alarm. We talked to him briefly and cleared the call. Since we were in the neighborhood we took a drive past the Big Rock Brewery. You know, for safety.

There were many instances where we either never made it to the call or we encountered something needing our attention. We were on our way to dinner when someone made a bad life choice in front of us, causing us to delay the food getting.

Vehicle ran a red, with no lights on, in front of us. Lapsed insurance too. S-M-R-T. Don't do that, k? #cmpol #yyc pic.twitter.com/tW67d4TkCv

Once we finished up with the ticketing we headed to dinner at Bolsa Restaurant, a place with an infamous past through no fault of their own.

Bolsa Restaurant in the Macleod Trail Plaza has been owned and operated by Viet Tran, Dan Dang and their daughter Sammi Nguyen since 2005. On New Years Day 2009 gang members opened fire on the restaurant, killing three people inside. More info

To help the family keep their business going after the negative publicity impacted the amount of customers who visited Bolsa each day, officers dine at Bolsa for their meals. When we were there we had 4 of us at our table, 3 officers and myself. We were served by Mama, an affectionate woman fond of telling people to eat, and that they don’t eat enough. The whole family was wonderful and it wasn’t hard to see why the officers were so intent on helping their business thrive.

After dinner the first call to come in was a domestic disturbance. A gentleman stated that people had been drinking in his home all day and it was getting out of control. He wanted help removing them from his home. The call was resolved peacefully with people leaving the home voluntarily. It was weird standing in someone’s kitchen, looking at their photos on the walls, seeing their Christmas tree alight while people yelled and hurled accusations. ‘Tis the season and all.

During our travels we found this gem near the Bonnybrook treatment plant. It was really foggy out, so the creep factor was extra high.

Near the treatment plant lies the creepiest place ever. The fog is making this my new favorite spot in #yyc #cmpol pic.twitter.com/ASFpEMHqrw

The next call came regarding a possible drunk driver at the McDonalds beside Ranchmans. He had difficulties blowing into the tube, for whatever reason, but the officers were very patient and walked him through the entire process. 18 times. He blew 0.02 which was too much because he had a GDL, which he lost for 30 days as per Alberta law. 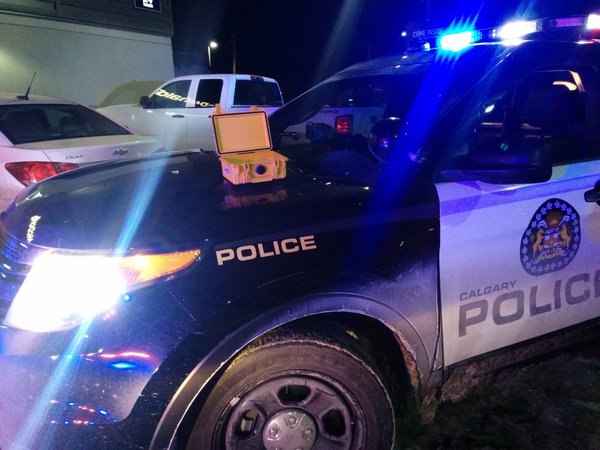 As we were leaving the call we were flagged down by one of the doormen from Ranchmans . A young lady was intoxicated with no ID and was too incoherent to get herself home or tell anyone where she lived.

When we arrived we found a vomit covered woman who was completely unable to stand and wasn’t capable of carrying on a coherent conversation. I helped Cst. Martin get her to the car and into the backseat, where she promptly vomited all over one side of the seat and floor. We eventually found her friends inside the club and we got them all in a cab and on their way home safely.

Took awhile but we tracked down friends of drunk girl. Not before she puked in our car & sent home in a cab #cmpol pic.twitter.com/2dirqsI0NP

Remember that the next time you drunkenly curse at an officer. They’re only trying to keep everyone safe and they put up with a ton of nonsense. Speaking of nonsense…

As we were taking the cruiser to be marked as bio-hazardous we came to a call right by the District 6 office. A customer was being aggressive towards a taxi cab driver, who then ejected the young man and his mother from the vehicle, stating the man wasn’t allowed back in his cab. The mother left in the taxi and we were left to take the talkative young man to wherever he wanted to go.

On the ride we were treated to a hilarious, angry, possibly drug fueled barrage that I can only describe as verbal shenanigans.

Not under arrest, taking him home "Man, my mama is gonna beat my ass". Quite the chatterbox. "Fuck you guys. I love you!" #cmpol #yyc

We dropped the fellow at his destination of choice, then headed to 7-11 to refuel with…

This portion of the ridealong is being fueled by candy and @7ElevenCanada Pumpkin Spice Latte. Onward! #cmpol #yyc pic.twitter.com/d70FPeNPgr

As we headed back to District 6 to get the car cleaned we heard the call about a possible drunk driver around Ranchmans which was on our way back. The license plate number the caller gave us wasn’t correct (too many numbers and letters) so we circled around a few times but didn’t see anything. We were about to leave when I spotted a vehicle in the McDonalds drive-through that looked like it could match the description. We held back a second until the vehicle exited the lineup so we could pull in behind it and check the plate. Sure enough, we had found our vehicle.

The driver blew a caution on the breathalyzer and was dealt with accordingly with fines and car impounding. Instead of being polite to the officers the driver was argumentative and he seemed headed to a trip to nowhere fun but he managed to keep it together when Cst Martin reminded him that he was in no position to argue.

That rounded out our evening. The super fun and cool sergeant offered to handle the paperwork so I could be driven home, as it was 200am by this point.

Awww, the Sarge has labelled me as a troublemaker. It's like they know me or something 😱 #cmpol

That concluded my ride along with the Calgary Police! It was a fantastic look into the day to day workings of a police officer! Here’s all the calls from our evening.

And that rounds out my @CalgaryPolice ridealong! Here's all the calls from tonight. I hope you guys enjoyed! #cmpol pic.twitter.com/X8pyOqZwHR

Mr Crackmacs went on a ridealong last year. You can check that one out here. To see all of the tweets from both of our ridealongs, check out the Twitter #cmpol

Thank you to Cst Martin and the Calgary Police Services for allowing us to come along, again, to show people what a night on duty is like.