Flooding in Calgary: Our Experience

When it floods in Calgary, it floods hard. In my time living here I’ve seen it happen twice. Back in 2005 it rained for weeks and weeks, causing the Bow River to swell and take out a portion of Prince’s Island park. Now 2013 flooding in Calgary. 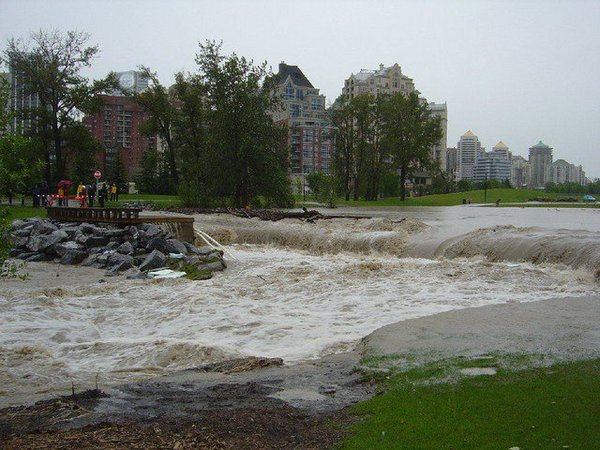 Seems like it wasn’t THAT bad back then, but it certainly did some damage.

8 years later in June of 2013, the flooding in Calgary was historic and catastrophic.

The flooding in 2013 ruined so many homes, flooded downtown businesses, even killed a couple people (rip). Pretty much half of downtown Calgary was under water at one point. It was very scary.  We weren’t directly affected in our building (Calgary Place), but it was close. The water crept up to about a block away. Our building was mostly voluntarily evacuated for the duration of the floods.

Video of Flooding in Calgary

While on the way home from work one afternoon, when the water was rising but before any actual flooding had happened downtown, I stopped by Prince’s Island park to check it out. I had no idea it would begin flooding right there and then. To the best of my knowledge, this video was recorded on a Galaxy Nexus cell phone.

Consequently as I walked by the stage on the island (start of the video), the water came in behind me, across the pathway. I had to walk through about a foot of water to get out. I didn’t record that part, I was kind of freaking out. If I

Here’s a video of the Calgary Fire Department telling everyone in the building that we might lose power and to evacuate. They only made this announcement once. Every unit has a speaker for fire alarms, and other notices.

Shaw Communications, where I worked at the time, sent out an e-mail telling employees not to worry about your jobs, just take care of what you need to take care of. I really miss working at Shaw, loved working for them.

I chose to stay in the apartment to take care of our pets. Mrs CM and the kid evacuated and stayed with family for a couple days, just in case. We both kept up to date through Twitter, which was extremely valuable. Traditional news media can only update people so fast, but Twitter is real time and it was vital to get the right information out as soon as possible, to as many people as possible.

Twitter turned out to be the best way of communicating during a disaster, we learned. If you don’t have a Twitter account, you should consider signing up for one. We were able to get real time updates from the Calgary Police and Nenshi and other essential services as the situation was evolving and changing rapidly. Real time. Not on the 6 0’clock news. Not the next morning.

Kind of amusing, the Calgary Police Twitter account was actually suspended by Twitter during the flooding in Calgary. Right in the middle of the chaos, their light got switched off. It wasn’t down for long though. I don’t know why it happened but I speculate that during the emergency they were responding too quickly to too many people and it triggered some kind of anti-spam protection. Twitter fixed it and therefore no more suspensions have taken place.

Here you can see where the electricity stopped. This is 4th avenue and 8th street southwest. It was very weird seeing nothing but darkness toward the river. 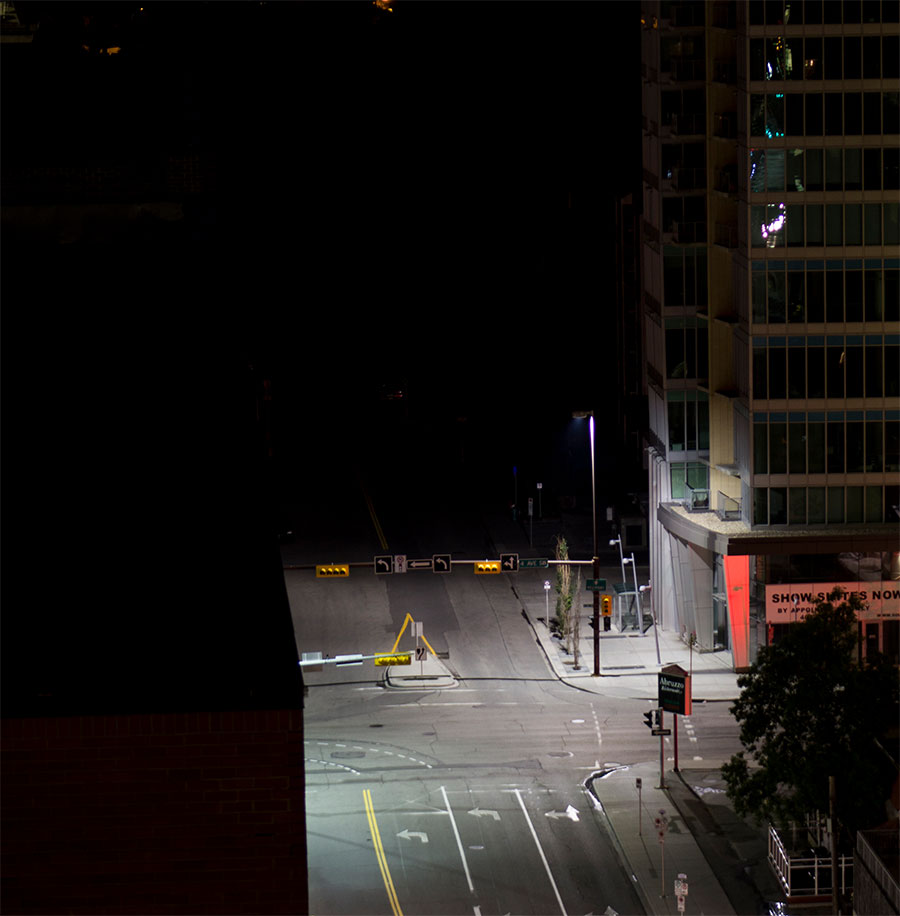 Stay in the light and you will not be harmed.

Here’s a 4 minute video of downtown from our point of view. It was so quiet and dark. There is no talking. Nothing exciting happens in this video, I just wanted to grab a somber slice of life as it was happening at the time.

Due to the sheer amount of extra water that fell, the Bow River swelled up so much that it almost touched the bottom of the Peace Bridge. 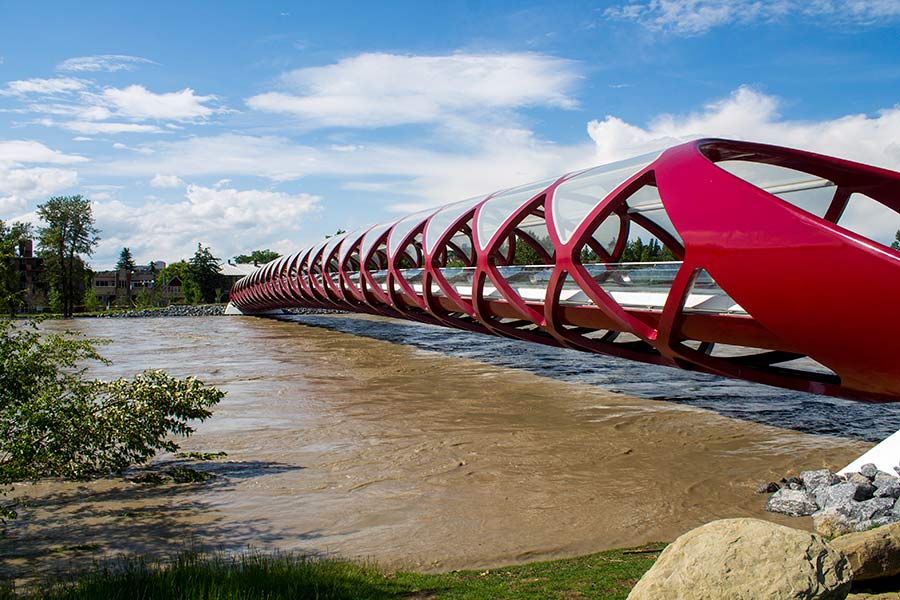 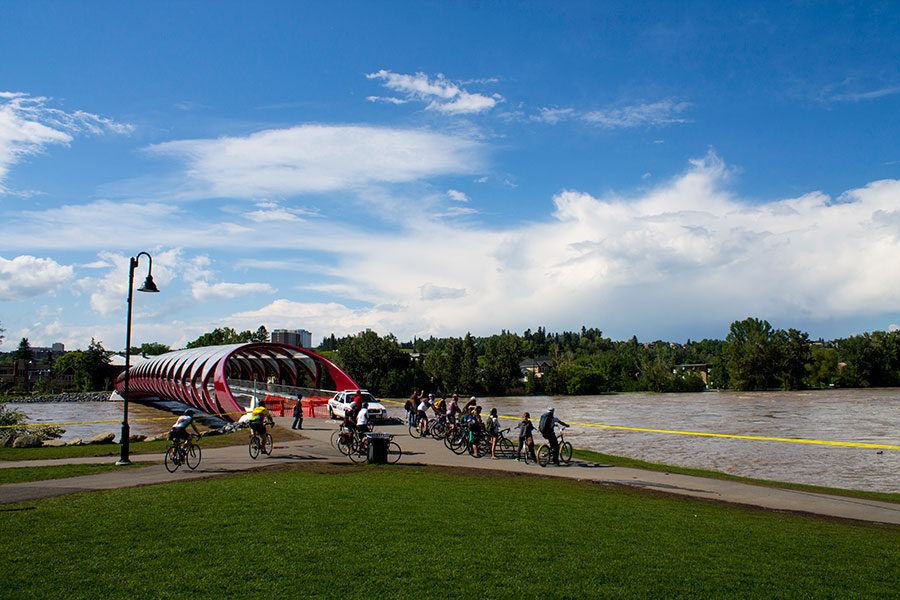 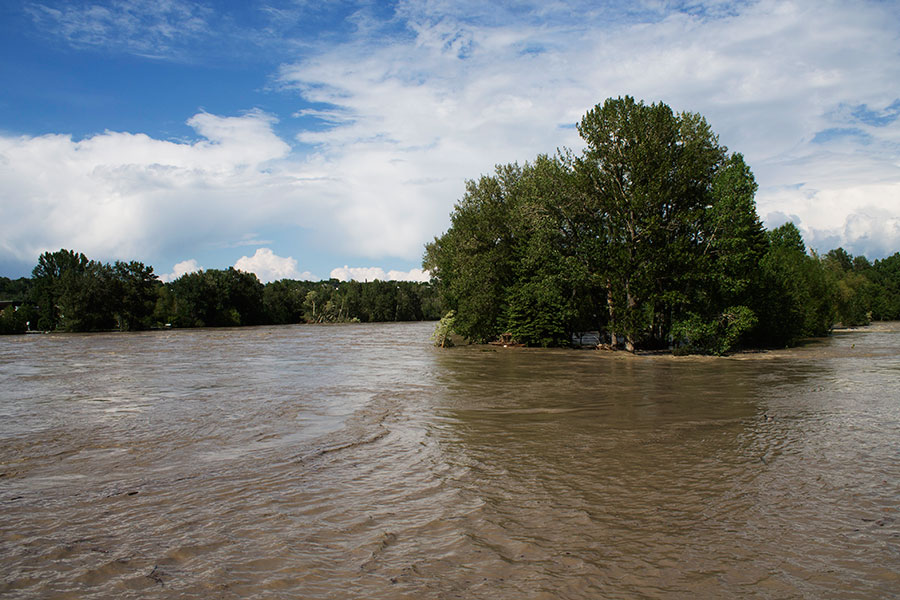 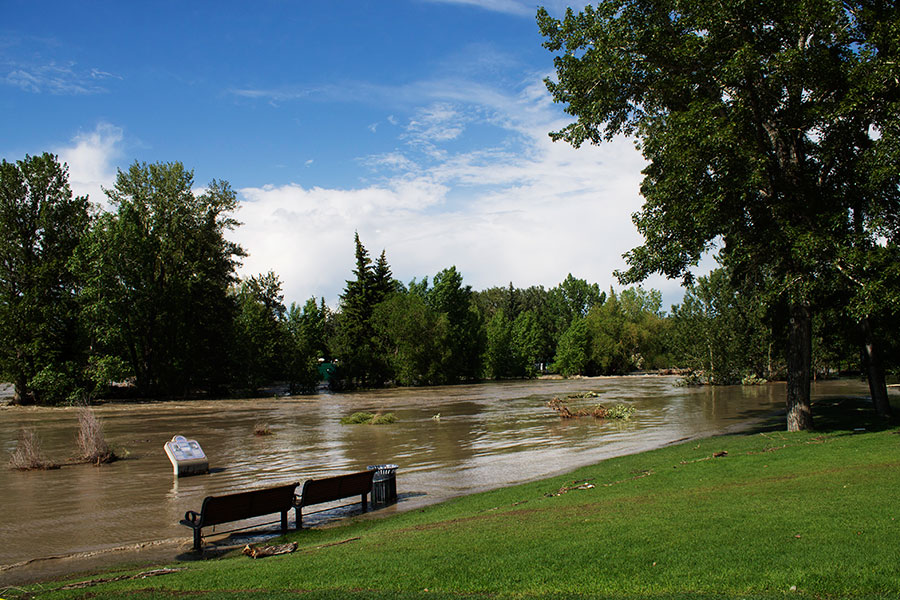 Downtown was under a mandatory evacuation order, which most people adhered to. As a result, the streets mostly just had emergency workers, police, and people with cameras. These photos are a couple days after the worst of the flooding in Calgary. I didn’t want to venture out during the peak of the emergency. You never know what might happen and I didn’t want to risk becoming a liability for emergency services to come and rescue. 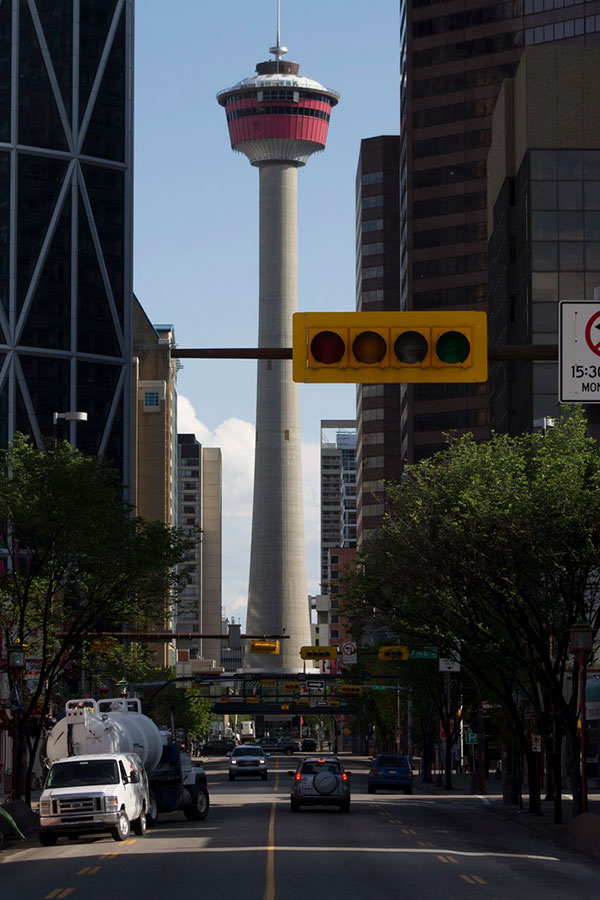 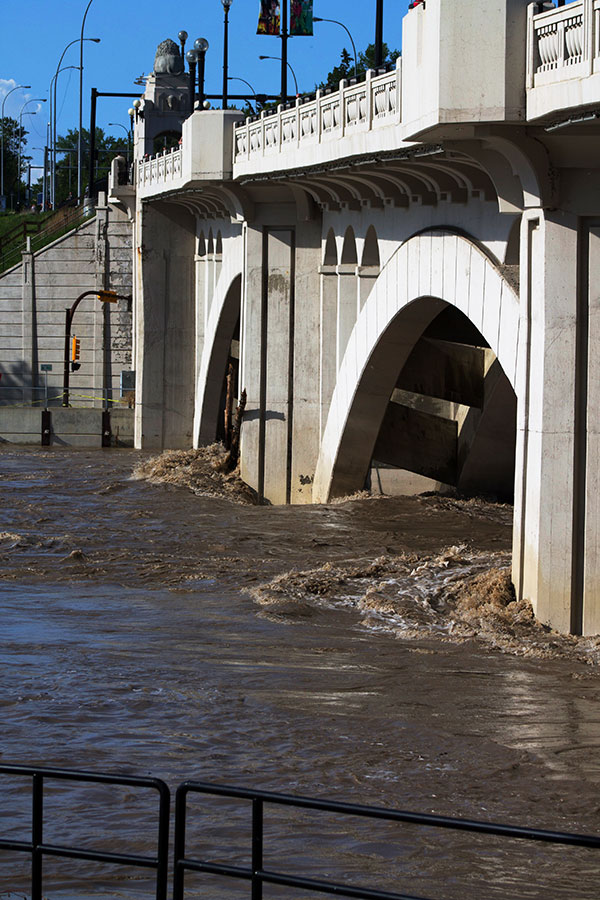 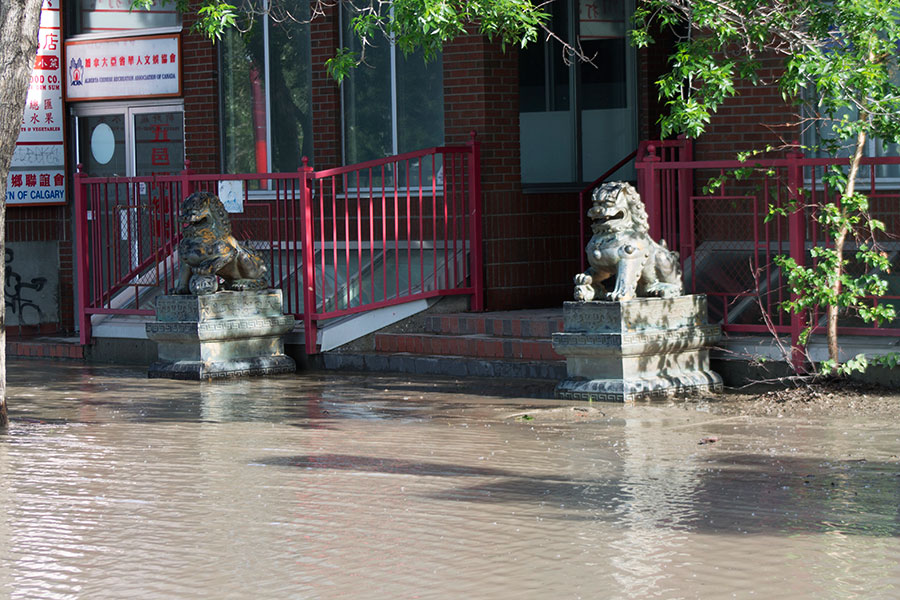 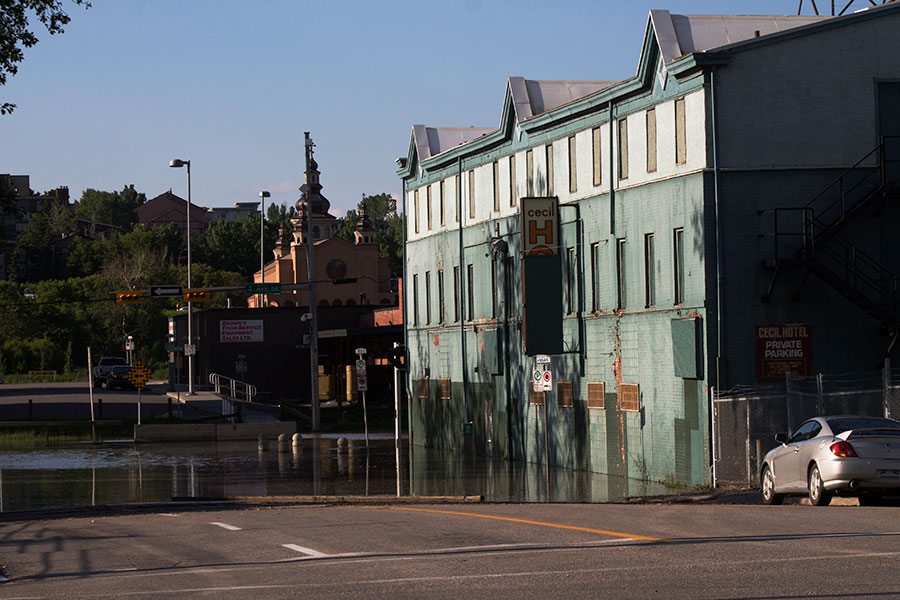 The Cecil too. Bet it smelled so rank afterward. 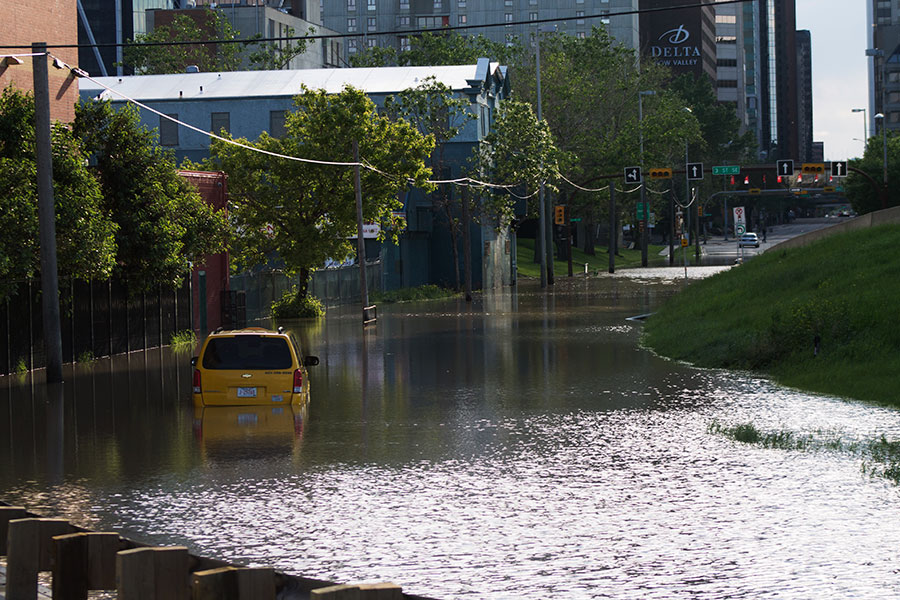 An abandoned Yellow-cab minivan. The Cecil Hotel in the background. 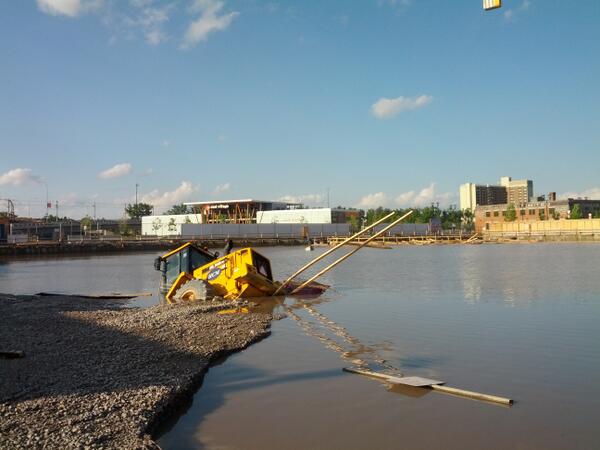 East Village. This was actually a massive hole in the ground that was filled in completely with the flood waters. 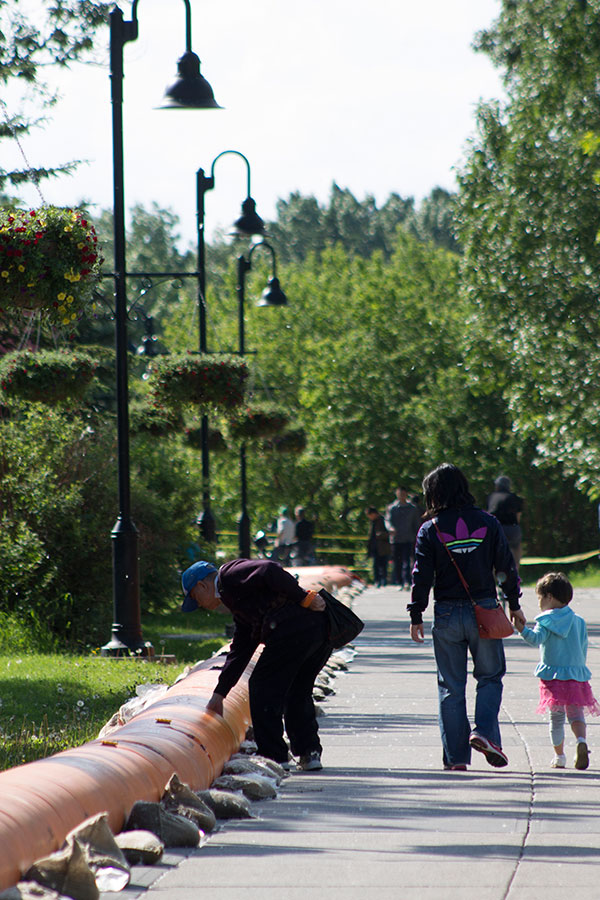 Emergency berms, in case the water came back

A Video after the flooding

Called this video “the day after”, but it was actually a couple days after the flooding in Calgary had pretty much stopped and the water began pulling out. Hehe, pulling out.

In addition, I actually found a gas leak and called 911, in the Pho Pasteur Saigon building. Firefighters showed up and shut it off, saving the day. I’ve never tried their Pho but I’ve heard it’s legendary.

Not sure where this photo came from but it’s of the bridge at Sandy Beach. Totally destroyed. (this is not my photo) 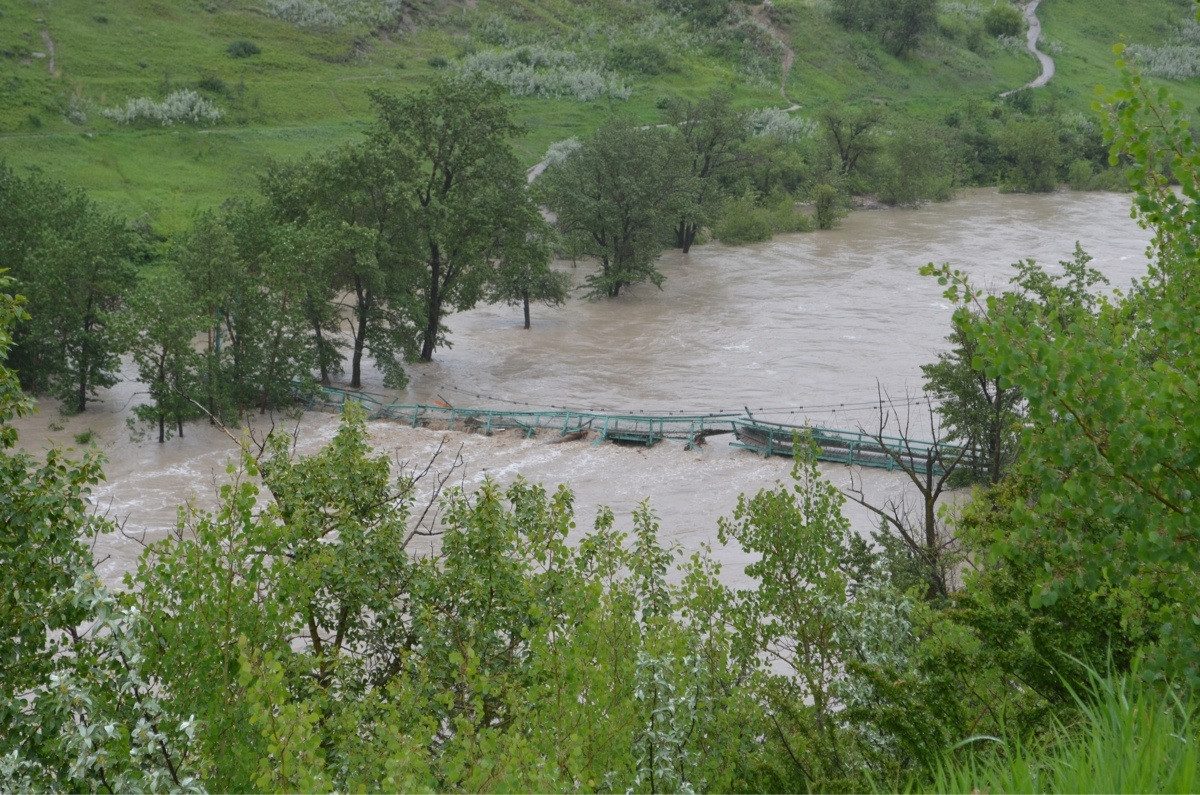 You can find the rest of our photos of the flooding in Calgary, here: https://imgur.com/a/eQwYj