A brief history of IRC in Calgary

IRC stands for Internet Relay Chat. It has existed for a quite a while (since 1988), but really hit it’s stride in the mid-to-late 90s. What is it? Think: servers and chat rooms. You join a server, and on that server you could join multiple chat rooms/channels. Pre-dating social media, ICQ, YaHoo chat, AOL chat, and even most web based forums, it was at one point the easiest and best way to communicate with people on the internet.

With IRC, each server belongs to a network. There are hundreds if not thousands of networks out there, each kind of with their own purpose. Back in the day, IRC was used by many people with similar interests to connect and engage with each other. For example, with online gaming. Let’s say you ran an Ultima Online guild, or a Quake server, or even just a popular gaming news website. There were no Facebooks or twitters back then, so if you wanted to communicate with your fans, you could setup a channel on a server within one of the networks, and tell people that’s where they could find you. People also used IRC to download music and movies and everything else through file sharing scripts and bots. They still do, in private hush hush channels.

IRC even has a place in history. During the Gulf War, IRC was used as a means of communication to share news and updates in real time without having to wait for traditional media (here are all of the chat logs). This was a time before Twitter and similar social media services remember, being able to casually chat with someone across the world was still new to humanity. In 1991 IRC was used to share communications during a coup attempt in the Soviet Union, and again in 1993 during the standoff between Russian President Boris Yeltson and parliamentary rebels. It has been used in times of crisis as well, like during the 1994 LA earthquakes, The Oklahoma bombing, and even September 11th. You can read more about the history of IRC here and here.

IRC is Still in Use Today!

IRC may not be as popular as it once was, but there is still an active community of users today. If you were someone that once upon a time used IRC in Calgary, you’ll be happy to know there is still an active #Calgary IRC channel! It’s on a network called EFnet. EFnet was one of the more popular IRC networks back in the day due to it’s lack of channel services (a bot that sits in the chatroom and protects it) and nickname services (you couldn’t register nicknames), and it was also around first. EFnet was kind of the ‘wild wild west’ of IRC in my opinion. I suppose it depends on who you talk to about IRC. EFnet was also one of the first IRC networks, which DALnet and Undernet split off from. It has quite the history.

Note: my use of #Calgary is not to ‘hashtag’ the word like you’re familiar with, but in the IRC world that represents the name of a channel. A chat room you can join and talk in with other people.

At one point there existed a #Calgary channel on each of the EFnet, DALnet and Undernet networks. It’s possible there were other #Calgary channels on other networks but none I’m aware of. Each channel had it’s own ‘regulars’ that would join and chat and discuss all kinds of random things with each other. The three #Calgary channels never really communicated with each other, though you could of course join all three channels if you wanted to. Some people did. Each channel came with it’s own list of characters, heated arguments and of course, all sorts of stupid drama.

I personally only really used the #Calgary channel on Undernet, so I’m not too familiar with any drama or milestones from the EFnet or DALnet #Calgary channels. If you are, share stories in the comments below!  Each channel had it’s own.. culture, almost. It’s own feel. It’s own flavour. It’s own group of people that got to know each other personally, both online and at meet ups and get togethers.

Below is a little bit of history I was able to throw together. It’s probably not 100% accurate and is missing lots of info, but hopefully other people can fill in the gaps.

The #Calgary channel at one point in time was owned by someone that went by ‘Legolas’, who apparently was a huge douche? (not my words). I’m not sure who existed before him, if anyone. What I mean by owned, on Undernet, was you could own one of the channels using the built-in channel services offered by the network. A bot named ‘X’ would sit in your channel (#Calgary) and provide OP access when requested to certain users, and protect against people taking the channel over and banning everyone. An OP (operator) is a moderator of the channel. They can kick people out, ban them, and do other things like set the channel topic and settings. Legolas had complete control of the channel, so he essentially owned it. OPs sit in the channel and keep watch over it, kicking out spammers and trolls.

Details about this time are fuzzy, it was almost 20 years ago now. Luckily, I was contacted by “Mooky” and he provided some context and history. Mooky was one of the #Calgary on Undernet channel owners and you could find him there all the time.

So Legolas owned the #Calgary Undernet channel. Some kind of revolt or drama ensured and he was ousted as channel owner, and someone named Azrael took it over. Then, something happened with Undernet causing channel services to stop working. A crash of some sort. I nor Mooky do not recall the full details, but network services stopped working. #Calgary was taken over for a while during this time by someone else. Eventually channel services (the bot called ‘X’) were restored, and Mooky became the new owner.

I don’t recall too much for drama from #Calgary on Undernet, however at some point in time there was some tension between OPs of the channel, and a new channel was created called #BizzaroCalgary. It had something to do with the way #Calgary was being operated. An argument over banning someone between OPs? I’m not sure. #BizzaroCalgary had around a dozen people in it. I don’t really know what happened to it. #Calgary2 was a thing for a while too for some reason. Probably some kind of drama.

Otherwise all that ever happened were a lot of people joining from #Montreal and spamming ‘VIVA QUEBEC!!’ and so on, getting themselves banned. This happened frequently. Rinse and repeat.

As for meeting in person, #Calgary had a few meet ups at places like Boston Pizza. It was pretty common back in the day to meet up and hang out with people you’d get to know in an IRC channel. Mooky recalled one year holding his birthday party at the Warehouse, and something like 50 people from IRC showed up to it. This was sometime in 1996.

During my research, I found this archived copy of an old #Calgary on Undernet homepage from 1999. Click: calgary.liquidchicken.org – and it had a list of nicknames that used to frequent the channel.

I joined this channel a few times, but didn’t often stay very long. The channel has been around for years, though I’m not exactly sure how long. I found it very difficult to just hang out and chat with people in this channel. When I joined, a user that went by the name ‘analog’ ran it – with an iron fist. And he was an asshole. He would kick/ban people for no reason, insult everyone, just act like a troll. That all ended when he passed away, from a drug overdose if I remember correctly. I’m sure he was nice in person. RIP.

Perhaps analog was the glue holding it together? There were a few regulars in the channel, but they eventually stopped using it after he died. Eventually the channel emptied out and became nothing.

This is kind of a condensed history of the channel from my point of view. Maybe someone has more information or stories and can drop them in the comments?

Today #Calgary on EFnet is full of regular users and random people drop by frequently. It’s quite active towards the evening, and well into the night.

I never really used the DALnet Calgary channel, so I have no stories or information of my own to share. However, I asked about IRC on my Facebook page, and some people that did use DALnet chimed in with some updates. Click here to visit the Facebook post. 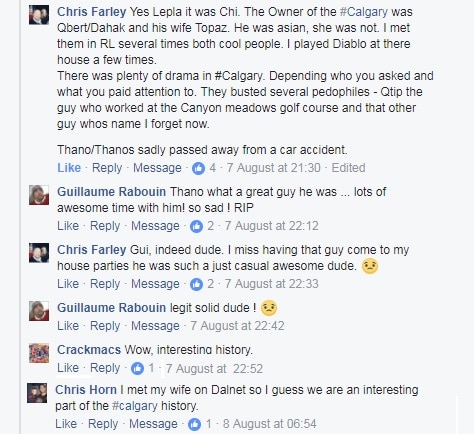 A sad update, but an update nonetheless. If you used #Calgary on DALnet and have any updates/stories, drop it in the comments below!

Never actually heard of this channel before writing this blog post, but I was doing some googling and found it. Appears as though it was quite popular back in the day. I found a website of theirs which has links to a list of their regular users, and their photos. This stuff is from almost 20 years ago now! I bet the people in these photos would love to see them.

You can visit the website here, http://www.calgary4fun.freeservers.com (here’s an archived copy in case it disappears someday) 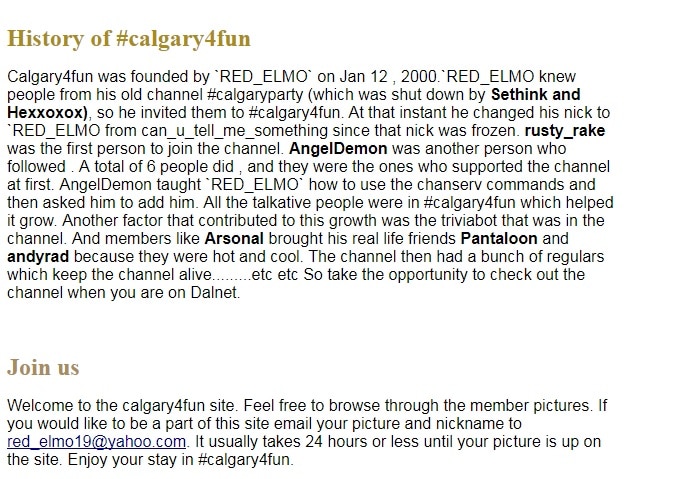 I did try contacting the red_elmo e-mail, but it bounced back telling me it no longer exists.

Below is a list of users that would hang out in the #Calgary4fun channel. The lists below are screenshots, so the names are not clickable. I wanted to save a copy.

Here is a link to the women page that has the clickable links to see the images. 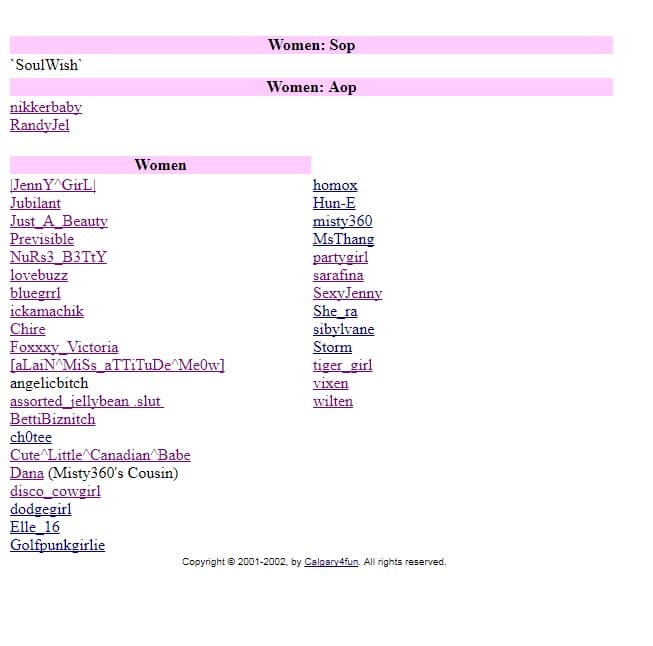 And here is the page for the men. 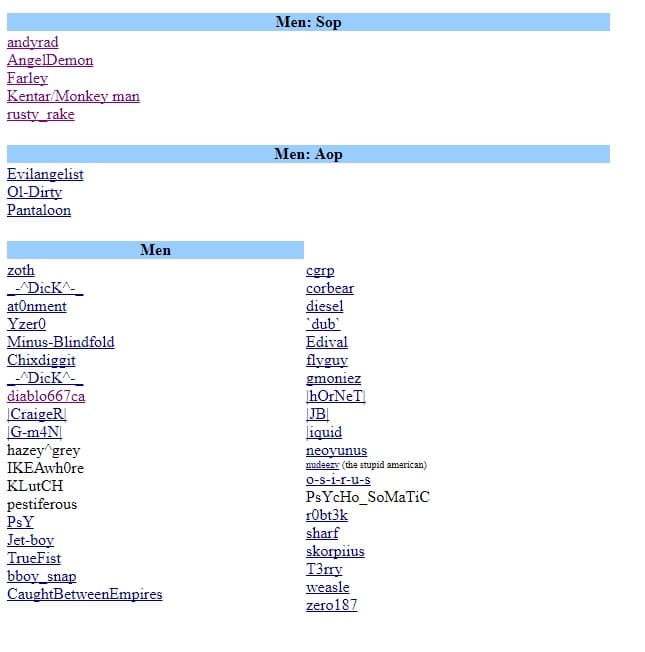 To make things a little easier, I’ve downloaded all of the photos from both the men’s and women’s #Calgary4fun pages above and they’re posted below. If you used the IRC channel, maybe you’ll see yourself below. If anyone would like their photo removed from here, shoot me an e-mail. CrackmacsCalgary@gmail.com.

I have no idea who any of those people are, but they kind of look like people everyone would know in the 90s. If you recognize anyone from the photos, maybe share this post with them? As well, if anyone in any of the photos wants me to remove it, just shoot over an e-mail or DM on Facebook/Twitter/IG. An interesting bit of IRC history in Calgary for sure. Wish I could find photos from the other #Calgary channels.

I really recommend downloading a specific IRC client, like X-chat or mIRC or whatever version of popular for your operating system. If you’d rather not, there are a few web based options. Also? There’s a whole bunch of IRC apps now for mobile.

EFnet has an official web based IRC client. Just give yourself a nickname, hit join, talk to people.

KiwiIRC  is another web based IRC client. Note: sometimes certain servers won’t work, but you can manually change the server in the URL. Just swap out the bolded part, for another server.

mibbit is another web based IRC client. You can swap the server out for another one if it stops working. Swap out the bolded part for another server.

The channel, of course, is #Calgary.

Please do drop in a comment if you have any IRC memories or fun facts or any of that good stuff. Thanks!

I’m probably missing a ton of information from the various channels. Keep in mind they all had multiple years of history, seen from many points of view. I hope that if anyone has anything else to include, they do it in the comments below. This blog post, as far as I know, is the only place on the internet attempting to even mention the history of IRC in Calgary. Nostalgia is fun!

Best Bar None – Accreditation for safety and service in Alberta