Have you played this game yet?! It’s like Pokemon GO but with dinosaurs.. but here’s the kicker – it’s actually fun to play! Yes of course Pokemon GO is fun, but it can also be really boring once you get beyond the nostalgia factor, or if you’re stuck in the same place. With Jurassic World Alive, they basically copied what made Pokemon GO successful, ran with it, added more features and released it upon the world. The core game play is very similar, but there are are some big differences too. For example, you can battle other players at any time, from anywhere.

If you’re on Facebook, we have a group for it.

There isn’t really a solid story line or anything, you’re just plopped into the game, but it’s based on Jurassic World, so expect it to revolve around that. If you’re wondering, yes, Blue is in the game haha. It might feel a little weird though. YOU aren’t really anyone. You’re just a hovering point on a map collecting DNA and battling other players. Maybe one day they’ll add some story content or something. A little polish to make it feel more like YOU’RE actually there, y’know? There is a tutorial and stuff, but it’s nothing great. You’ll forget you went through it after a day or two.

Boom! You fire the game up and you’re on the map and off you go. Find dinos, collect supply depots, items, battle others, it’s a blast.

Instead of ‘catching’ dinosaurs, you collect their DNA and use it to create your own dinos. When you see a dinosaur on the map and you go after it, rather than capturing it or fighting it, you hover over it as a drone, and you shoot DNA needles down toward it, as it walks around. It’s not as easy as it sounds! Especially if you’re in a vehicle. You’re aiming for a moving target, so you have to nail the timing to get the most DNA points. You get more DNA if you hit the bulls-eye. It sounds kind of silly, but it’s actually really fun. The targeting system isn’t super accurate either, on purpose, so you have to actually have some skill to gain the most points. It is leaps and bounds better than the ‘hit it with a poké ball system. 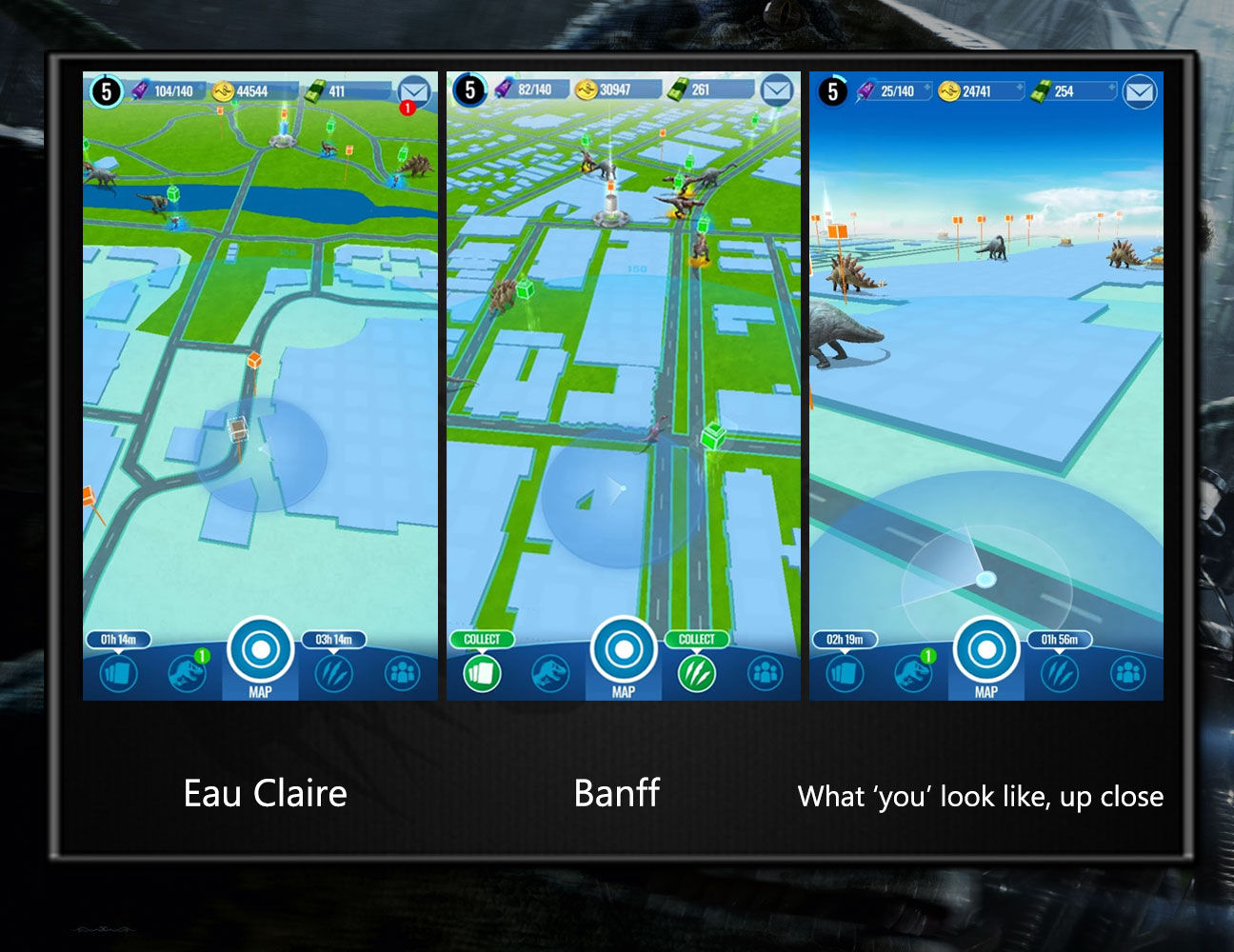 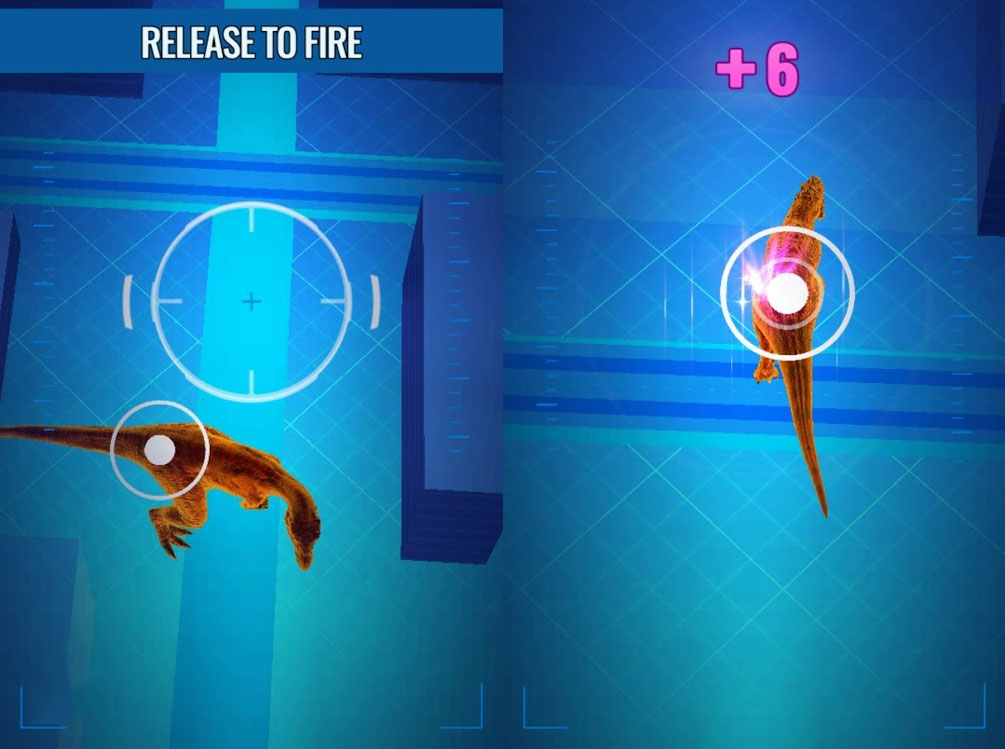 Something cool is making hybrids. If you collect enough DNA from specific dinosaurs, you can create hybrids that share the characteristics of both hosts. The benefit of a hybrid is you’ll have an advantage in battle over other players if they’re using the ‘normal’ dinosaurs, because they’re strong as shit! You’ll get better attacks and other benefits. Totally worth collecting all of those stegosauruses! Plus, they’re strong as hell and often have a decent set of abilities. 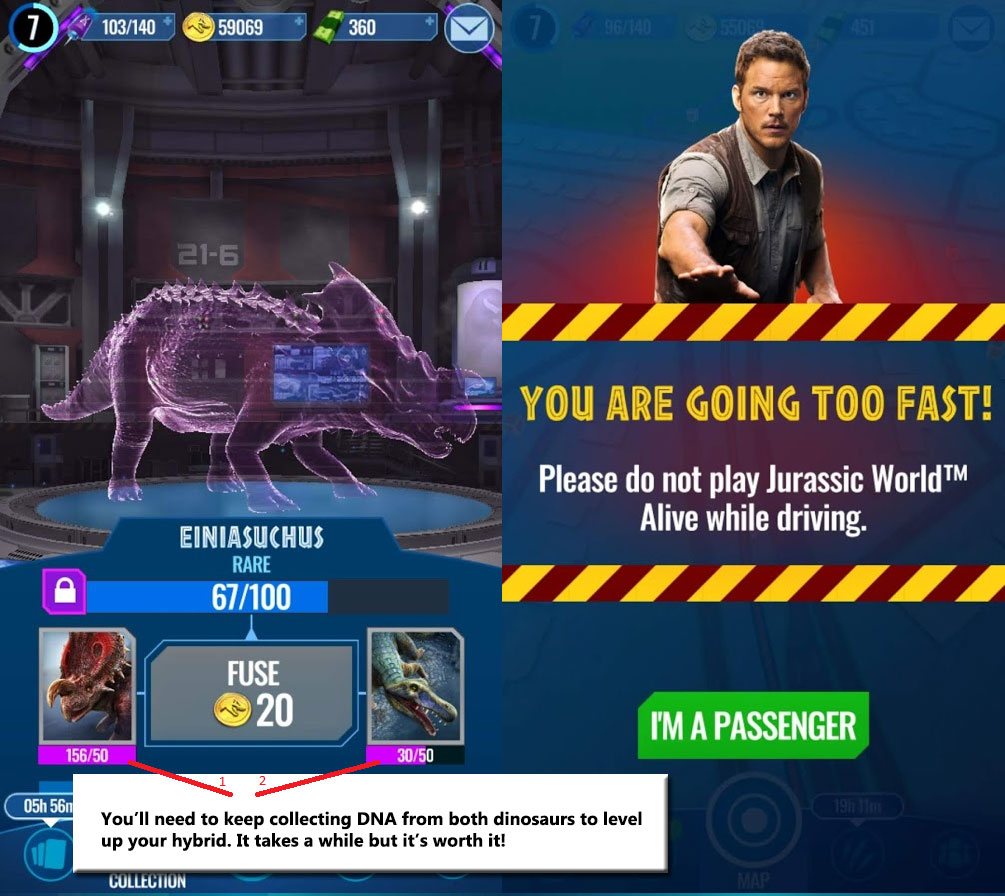 There are ‘supply drop’ markers located randomly throughout the map, which are basically the same thing as a poke stop, if you’re familiar with them from Pokemon GO. You walk up to them, spin it, get some free items. Pretty straight forward. They have a countdown timer until you can spin them again. The regular orange ones are the most common and what you’ll see for the majority of. Green supply drops will often have rare/epic dinosaurs under them too. 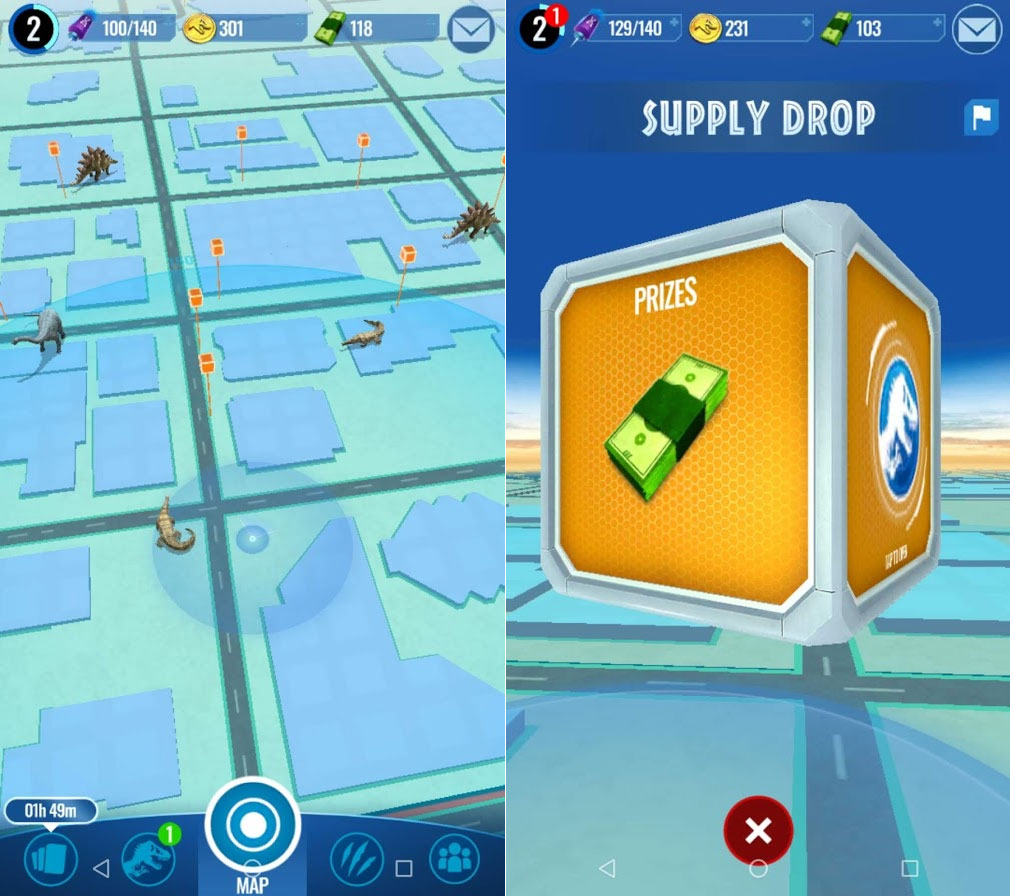 Green supply drops also occasionally will give you bonuses for watching short video ads. They’re worth watching for sure to get the 2x bonus. In addition, when I went to Walmart, I noticed the supply drop was actually branded. Kinda neat? Supply drops come with a 15 minute timer until you can use them again. I didn’t notice anything special about them and the rewards were the same as a normal supply drop. Still, I like little details like that. 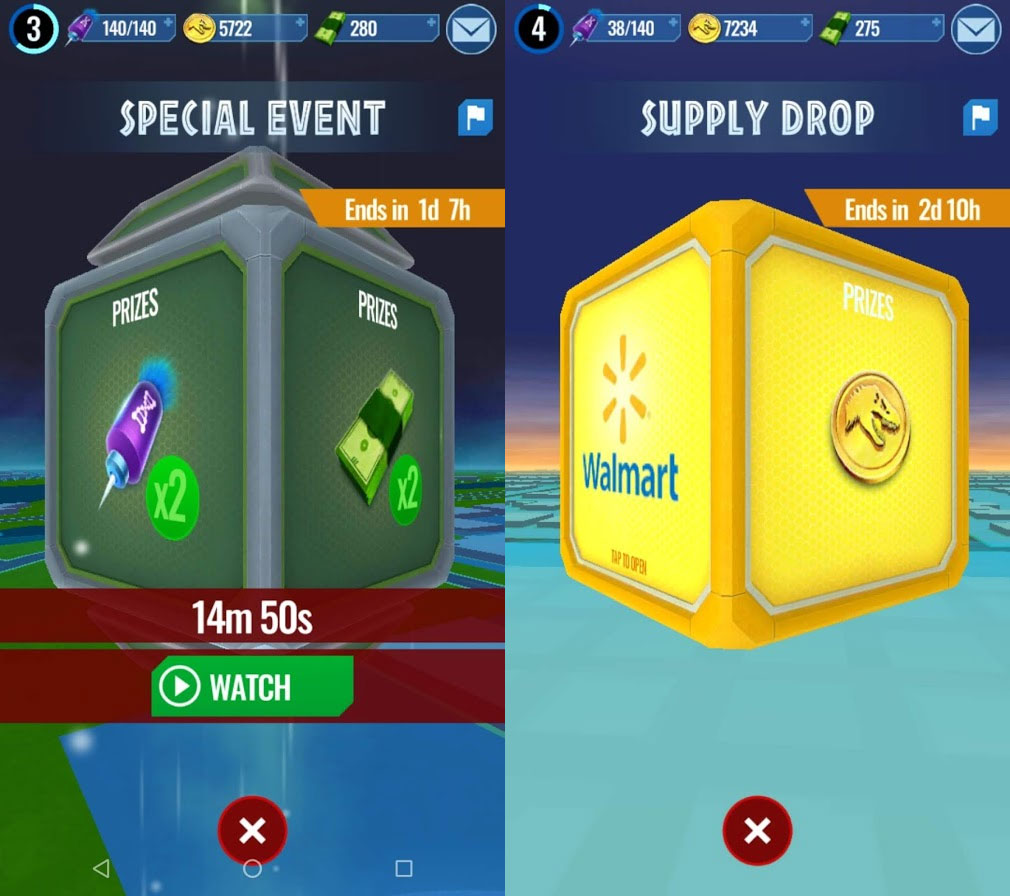 Incubators are treasure chests. They range in quality from kind of crappy, to full of really decent rewards. You’ll receive an incubator every time you win a battle against another player, up to a maximum of x4. In order to open the incubators, you’ll need to wait. They range from 15 minutes (for the lowest) to 24+ hours. A shortcut, of course, is to use “cash” to instantly open up the incubator. The cost of cash depends on how long is left on the countdown timer. If you already have 4x incubators, you’ll need to open one in order to get more of them.

The different battle arenas (as you level up through them) will have specific rewards in their incubators, but will always contain something random. 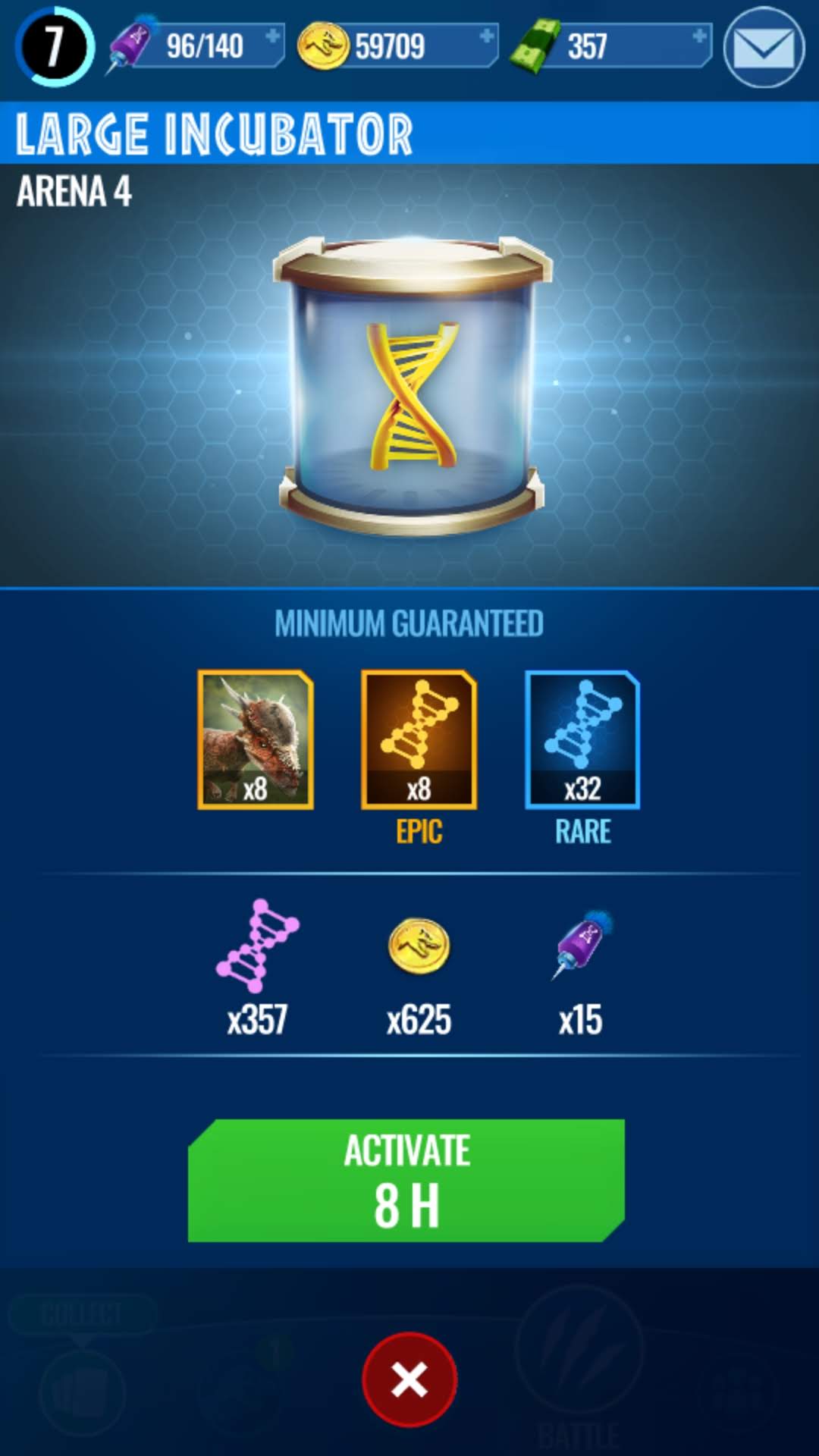 The above incubator has an 8 hour countdown timer, and it has some minimum loot guarantees. You’ll get better and better incubators as you earn points from battling other players. Once you reach certain amounts of points, you’ll automatically begin competing in an arena suited for your level/capabilities. The game does a pretty good job of matching up players against other players of the same skill, too.

The further a dinosaur is from you (physically on the world map), the less ‘battery’ power the drone will have to reach it and collect DNA, so always try to be as close as possible to the spawned dinosaur before you launch the drone. The maximum distance you’ll be able to reach is 150 meters from your current location, though you can expand it if you buy into their monthly subscription (which is $12.99 at this time). 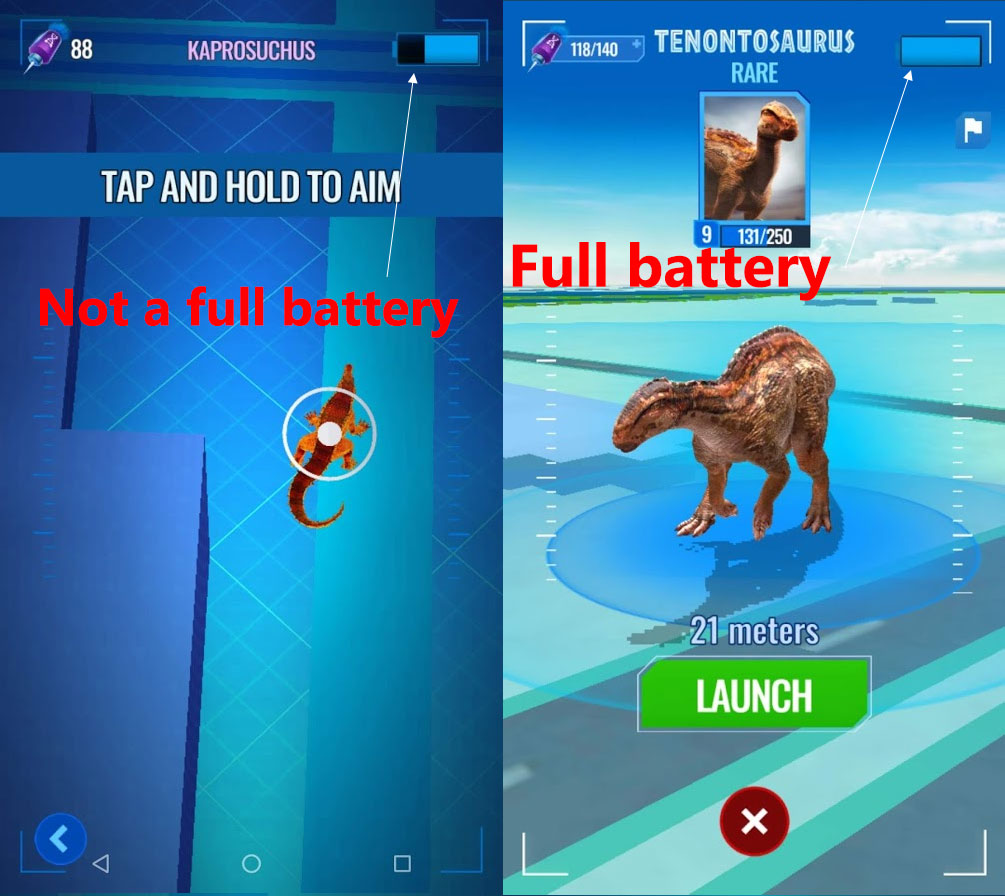 Your user profile in the game is pretty standard, including various pieces of info. You are able to see profiles of other players as well. The most useful part of it is your username (to give to friends). Feel free to add us! Crackmacs#8404.

The achievements in Jurassic World: Alive are a lot of fun. You earn cash bonuses for doing things in the game that you normally do anyway! It’s pretty sweet. Cash can be used to purchase items or speed up the wait time on incubators. 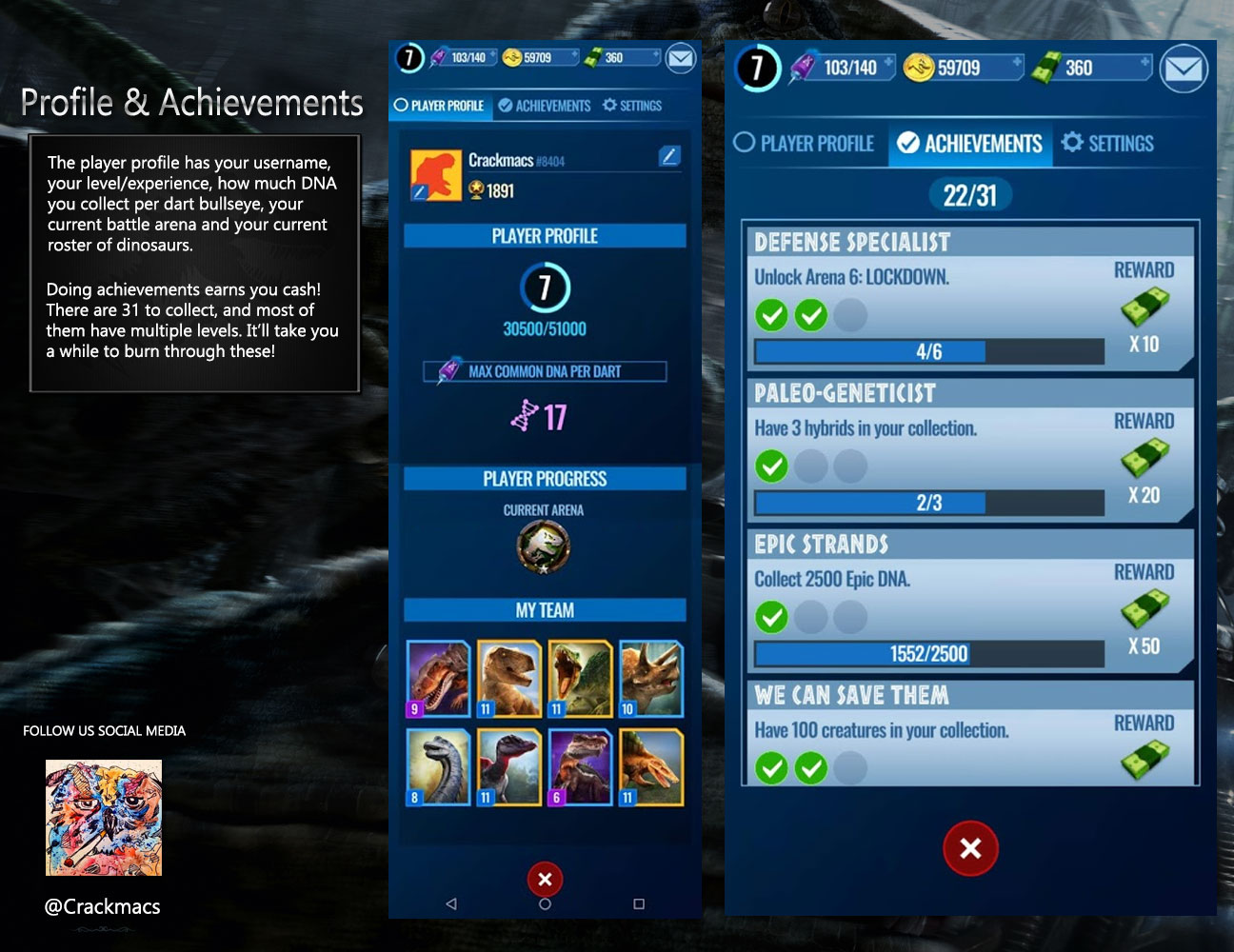 Something that they’ve really done right with this game are the map events. They’ll randomly spawn on the map as treasure chests, battle events or other things. You’ll often see epic dinosaurs sitting underneath the green supply drops. 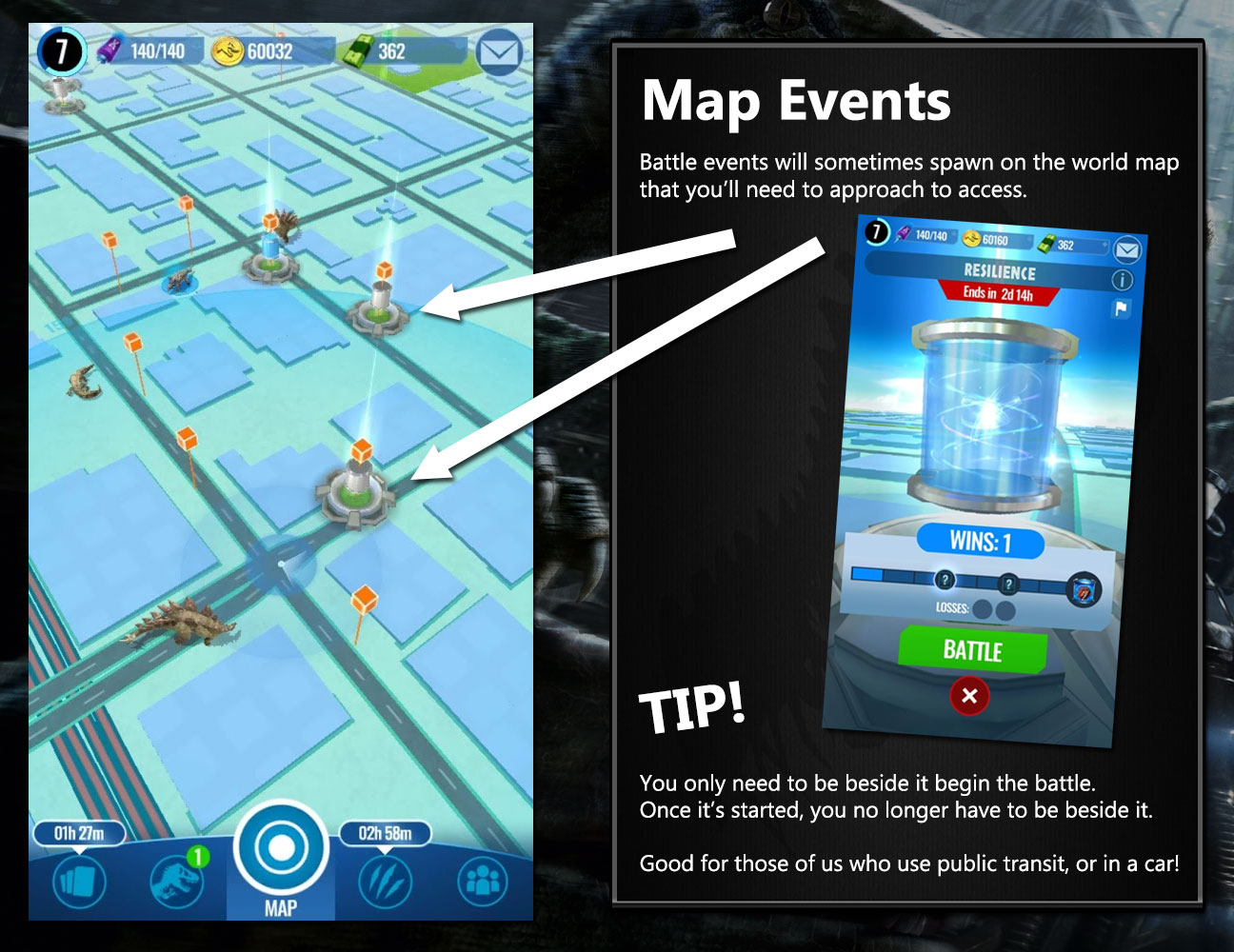 When I was in Banff, there was an event happening where a certain dino would spawn all over the place for 15 hours or so. You only get a few chances to capture them, so make sure they’re worth it (make sure you’re as close as possible). Some of them will be like 8 attempts. Here’s what it looked like at the Fairmont Banff Springs hotel. 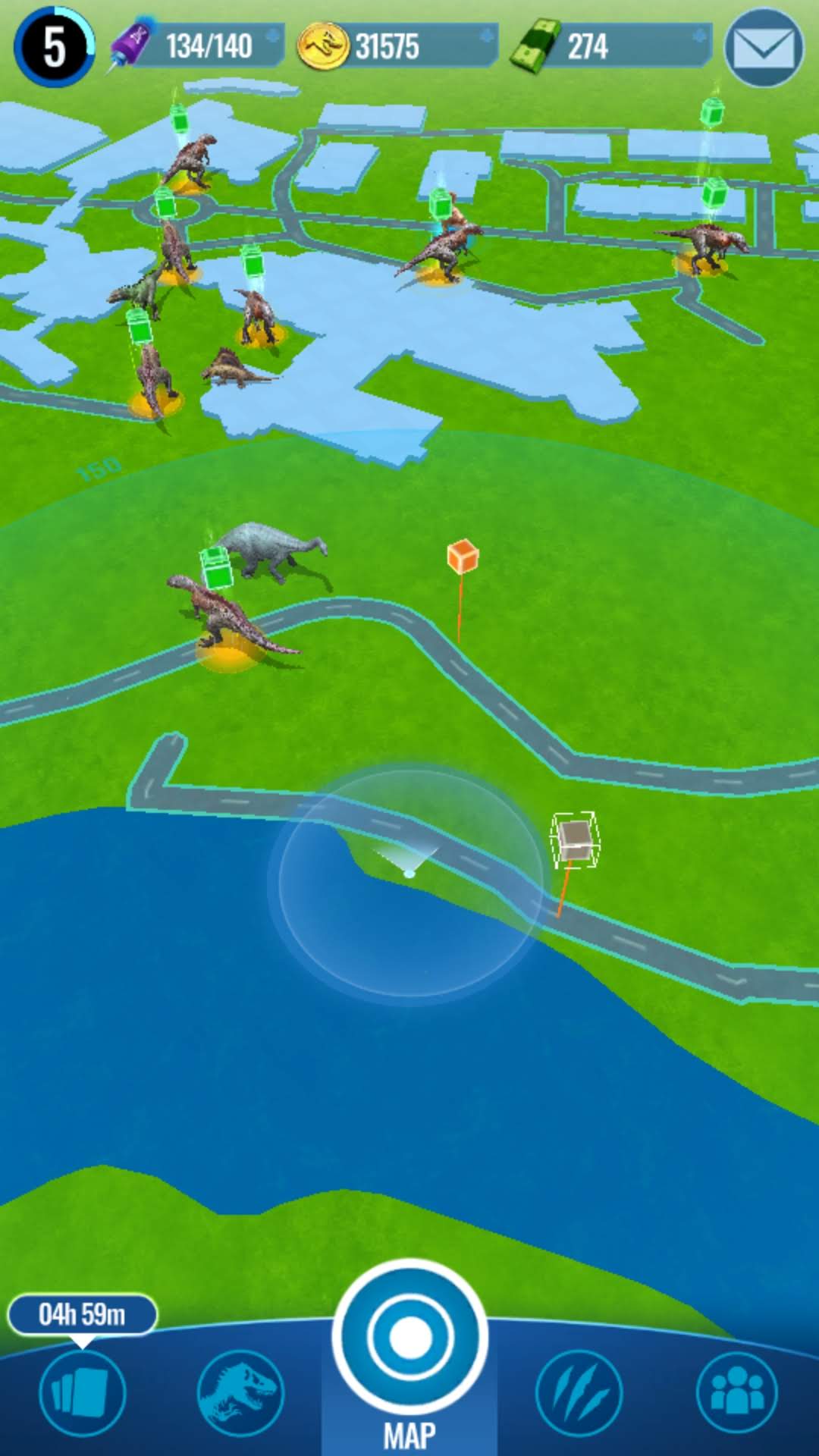 Using the dinosaurs you’ve already created, you can battle other players online to win and unlock incubators (think: treasure chest). Anywhere! Any time! You don’t have to get off your butt at all. If you can, save battling for times when you’re staying in the same place. If you’re taking the train and playing, you can miss out on rare/epic spawns. 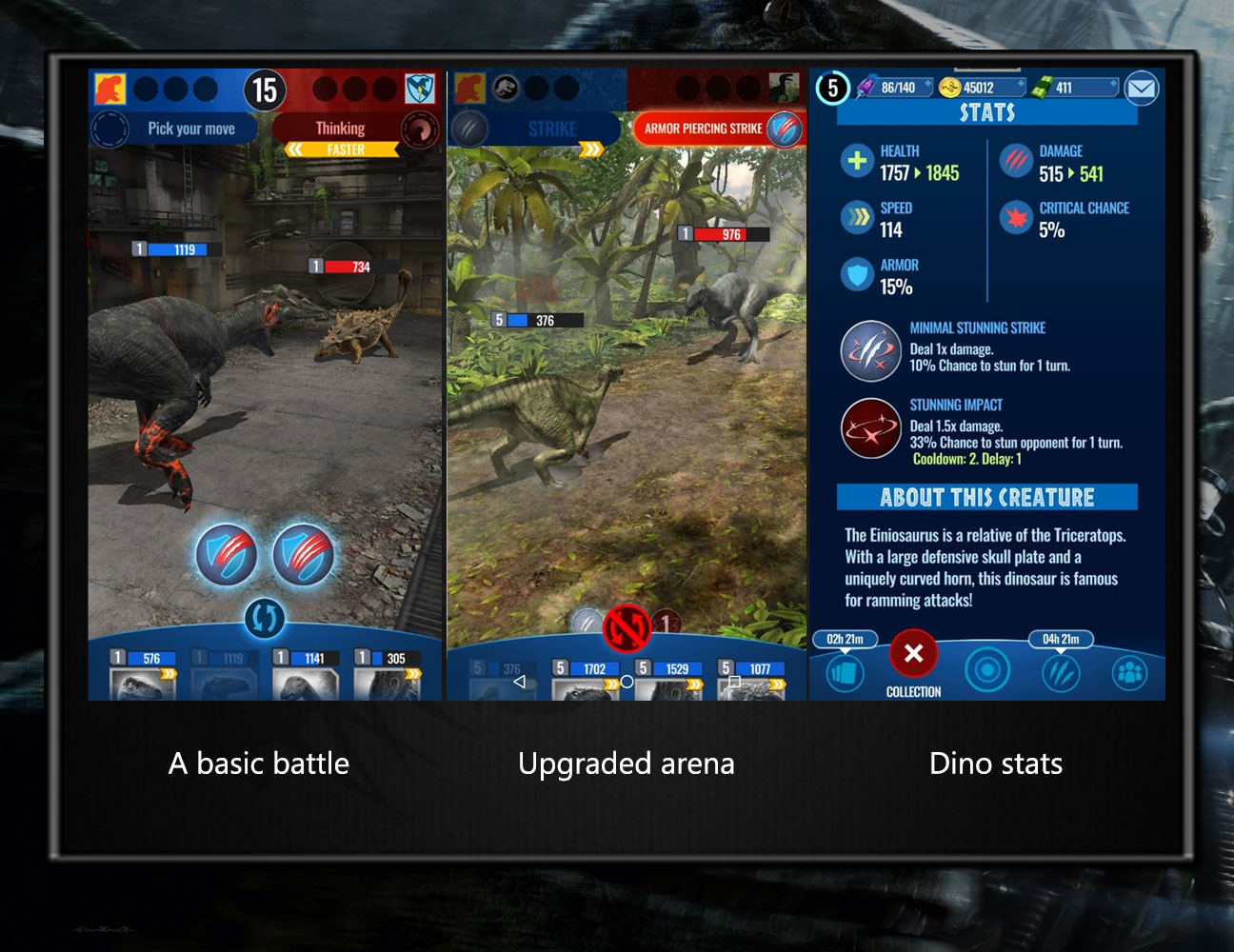 Battle is fairly simple, you and another player each get 4 dinosaurs to take turns hurting each other. As simple as it is, there’s actually a lot of strategy to it, using speed and stuns, immunity, shields, and other factors. It’s simple, easy to understand/play, and fun but challenging. Battles only last a couple minutes too. As a bonus, the graphics and audio are fantastic. 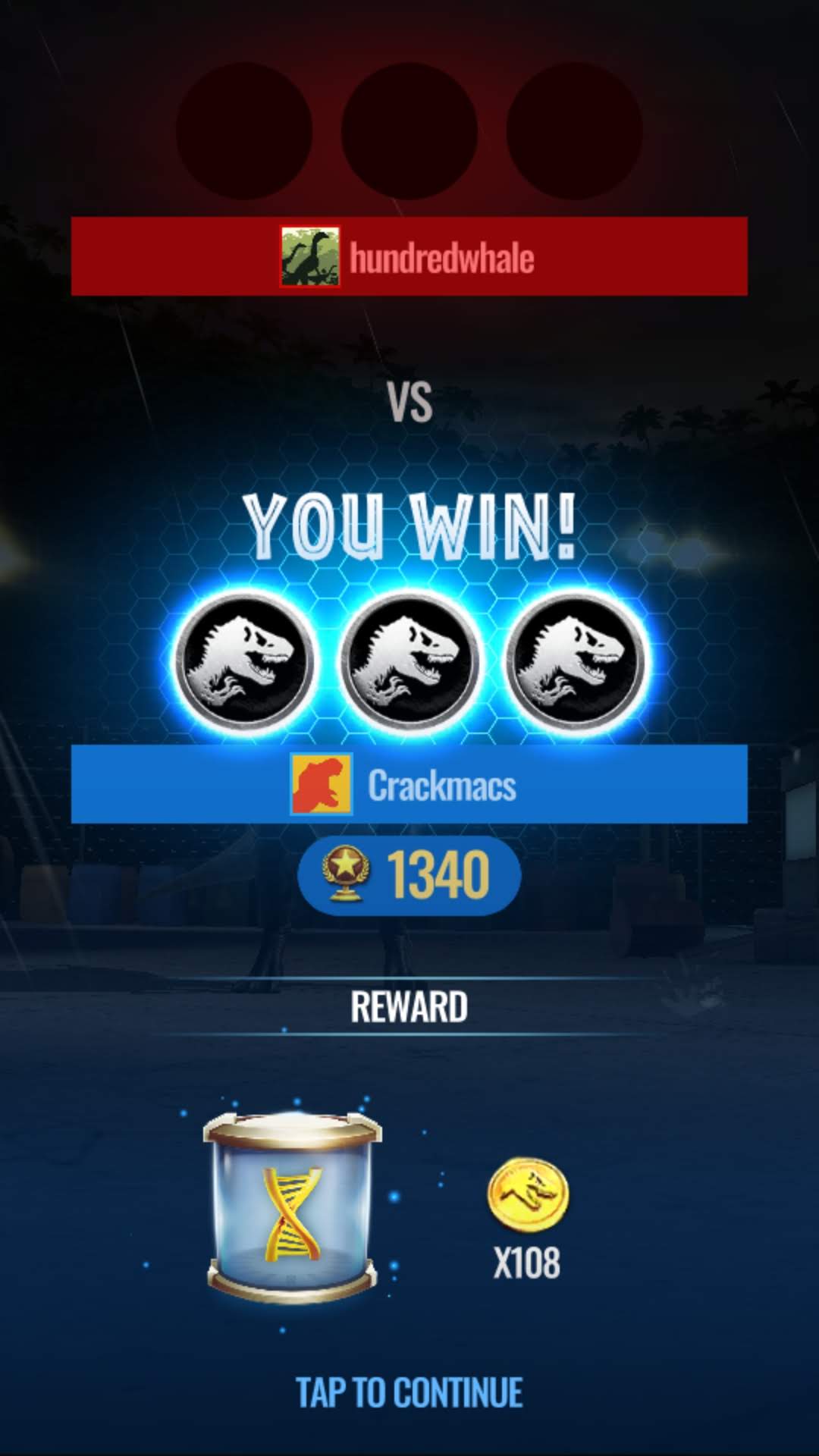 It’s only available for Android and iOS at this time. I can’t imagine it being made available for much else considering it’s a VR game. BlackBerry? Windows phone? lolol

I’m really having a blast with it. It has enough things to keep me coming back, and I’m actually learning about dinosaurs. The graphics are really well done, as is the audio. Music isn’t annoying or anything, thankfully, and the sounds from the dinosaurs are incredible! It’s a free game that I’ve been playing for a while now and I haven’t got bored yet.

One downside of the game for me is the amount of ads. Not ads DIRECTLY, but it’s always popping up with incubators I can buy and other ways to spend money within the game. It doesn’t bother me enough to stop playing, but it’s something worth mentioning.

Again, here’s our Facebook group for it. Join up if you play!

Haunted Places in Calgary and other local history