No more zero days! Following these 4 rules could change your life

Have you ever used reddit? It’s basically a big forum with sub-forums that anyone can create and run. reddit.com/r/Calgary is the Calgary sub-reddit, /r/Edmonton is one for the city of Edmonton, /r/CatPictures for pictures of cats, /r/videos is for videos and so on. One day back in 2013, a user by the name of maxstolfe made a post in /r/getdisciplined titled “I just don’t care about myself“. /r/getdisciplined is a space for people to ask for and share advice on all sorts of topics, usually with things like asking for studying tips, or how to plan a budget, or how to procrastinate less.

Everyone needs help in becoming who they want to be. Help others attain self-discipline, by sharing what helps you.

Max’s post was a lengthy rant about depression and not feeling any self worth and not really being sure what to do about it. We’ve all been there. The /r/getdisciplined sub-reddit may not have been the very best place to make his post (there other places dedicated to helping people in his situation) but it’s a really good thing he did.

/u/ryans01 Drops in a Comment: No More Zero Days

/u/ryans01, this random Canadian dude just browsing the /r/getdisciplined sub-reddit saw Max’s post and responded to it. His comment is long, but absolutely worth the read. He outlines 4 steps Max (or anyone) can take to get their life back on track.

Ouch. Sounds like you’re having a tough time max. That sucks. I’ve been there, so I kinda know what you’re talking about. I’ve been in the ever circling vortex of self doubt, frustration, and loathing. It’s no bueno. I know. If you don’t mind lemme tell you a couple things. You can read em if you want, read em again later if you feel like it. But honestly man, if I spend all this time typing this out to you and you don’t let it be a little tinder for your fire, well, you’re just letting us both down. And you don’t HAVE to do that. You don’t HAVE to do anything. But you get to choose.

(Who am I? My name’s Ryan and I live in Canada. Just moved to a new city for a dream job that I got because of the rules below. I owe a lot of my success to people much cooler, kinder, more loving and greater than me. When I get the chance to maybe let a little bit of help out, it’s a way of thanking them.)

What’s a zero day? A zero day is when you don’t do a single fucking thing towards whatever dream or goal or want or whatever that you got going on. No more zeros. I’m not saying you gotta bust an essay out everyday, that’s not the point. The point I’m trying to make is that you have to make yourself, promise yourself, that the new SYSTEM you live in is a NON-ZERO system. Didn’t’ do anything all fucking day and it’s 11:58 PM? Write one sentence. One push up. Read one page of that chapter. One. Because one is non zero. You feel me? When you’re in the super vortex of being bummed your pattern of behaviour is keeping the vortex goin, that’s what you’re used to. Turning into productivity ultimate master of the universe doesn’t happen from the vortex. It happens from a massive string of CONSISTENT NON ZEROS. That’s rule number one. Do not forget.

La deuxieme regle – yeah i learnt french. its a Canadian thing. please excuse the lack of accent graves, but lemme get into rule number 2. BE GRATEFUL TO THE 3 YOU’S. Uh what? 3 me’s? That sounds like mumbo jumbo bullshit. News flash, there are three you’s homeslice. There’s the past you, the present you, and the future you. If you wanna love someone and have someone love you back, you gotta learn to love yourself, and the 3 you’s are the key. Be GRATEFUL to the past you for the positive things you’ve done. And do favours for the future you like you would for your best bro. Feeling like shit today? Stop a second, think of a good decision you made yesterday. Salad and tuna instead of Big Mac? THANK YOU YOUNGER ME. Was yesterday a nonzero day because you wrote 200 words (hey, that’s all you could muster)? THANK YOU YOUNGER ME. Saved up some coin over time to buy that sweet thing you wanted? THANK YOU. Second part of the 3 me’s is you gotta do your future self a favour, just like you would for your best fucking friend (no best friend? you do now. You got 2. It’s future and past you). Tired as hell and can’t get off reddit/videogames/interwebs? fuck you present self, this one’s for future me, i’m gonna rock out p90x Ab Ripper X for 17 minutes. I’m doing this one for future me. Alarm clock goes off and bed is too comfy? fuck you present self, this one’s for my best friend, the future me. I’m up and going for a 5 km run (or 25 meter run, it’s gotta be non zero). MAKE SURE YOU THANK YOUR OLD SELF for rocking out at the end of every.single.thing. that makes your life better. The cycle of doing something for someone else (future you) and thanking someone for the good in your life (past you) is key to building gratitude and productivity. Do not doubt me. Over time you should spread the gratitude to others who help you on your path.

Rule number 3- don’t worry i’m gonna too long didnt’ read this bad boy at the bottom (get a pencil and piece of paper to write it down. seriously. you physically need to scratch marks on paper) FORGIVE YOURSELF. I mean it. Maybe you got all the know-how, money, ability, strength and talent to do whatever is you wanna do. But lets say you still didn’t do it. Now you’re giving yourself shit for not doing what you need to, to be who you want to. Heads up champion, being dissapointed in yourself causes you to be less productive. Tried your best to have a nonzero day yesterday and it failed? so what. I forgive you previous self. I forgive you. But today? Today is a nonzero masterpiece to the best of my ability for future self. This one’s for you future homes. Forgiveness man, use it. I forgive you. Say it out loud.

Last rule. Rule number 4, is the easiest and its three words. exercise and books. that’s it. Pretty standard advice but when you exercise daily you actually get smarter. when you exercise you get high from endorphins (thanks body). when you exercise you clear your mind. when you exercise you are doing your future self a huge favour. Exercise is a leg on a three legged stool. Feel me? As for books, almost every fucking thing we’ve all ever thought of, or felt, or gone through, or wanted, or wanted to know how to do, or whatever, has been figured out by someone else. Get some books max. Post to reddit about not caring about yourself? Good first step! (nonzero day, thanks younger me for typing it out) You know what else you could do? Read 7 habits of highly successful people. Read “emotional intelligence”. Read “From good to great”. Read “thinking fast and slow”. Read books that will help you understand. Read the body weight fitness reddit and incorporate it into your workouts. (how’s them pull ups coming?) Reading is the fucking warp whistle from Super Mario 3. It gets you to the next level that much faster.

That’s about it man. There’s so much more when it comes to how to turn nonzero days into hugely nonzero days, but that’s not your mission right now. Your mission is nonzero and forgiveness and favours. You got 36 essays due in 24 minutes and its impossible to pull off? Your past self let you down big time, but hey… I forgive you. Do as much as you can in those 24 minutes and then move on.

Ok, Ryan that’s a bunch of nice words n shit, but how does that help me turn slightly nonzero days into hugely nonzero days. Do you believe all these words you just read? Does it makes sense to you that you BECOME WHAT YOU THINK OF? Ask yourself: What do I think of? When you get home and walk in the door. (how quickly did you turn that laptop on? Did turning it on make you closer to your dreams? What would?) At the bus stop. Lunch break. What direction are you focusing your intentions on? If you’re like I was a few years ago, the answer was either No direction, or whatever caught my eye at the moment. But no stress, forgive yourself. You know the truth now. And knowing the truth means you can watch your habits, read books on how you think and act, and finally start changing your behaviour. Here’s an example: Feeling like bunk cause you had zero days or barely nonzero days? THINK ABOUT WHAT YOU’RE DOING. and change just a little bit more. in whatever positive direction you are choosing to go.

I hope I helped a little bit max. I could write about this forever, but I promised myself I would go do a 15 minute run while listening to A. Skillz Beats Working Vol. 3. Gotta jet. One last piece of advice though. Regardless of whether or not reading this for the first time helps make your day better, if you wake up tomorrow, and you can’t remember the 4 rules I just laid out, please, please. Read this again.

Have an awesome fucking day ☺

tldr; 1. Nonzero days as much as you can. 2. The three you’s, gratitude and favours. 3. Forgiveness 4. Exercise and books (which is a sneaky way of saying self improvement, both physical, emotional and mental)

F*cking Planner Stickers: Over 500 f*cking stickers to get your sh*t under control

The Response to No More Zero Days

The response was crazy! There are over 1000+ replies to Ryan’s original comment. A sub-reddit called /r/NonZeroDay was created (and currently has over 67,000 subscribers) for people to exchange stories and to keep each other accountable. The most popular post of all time there is a simple post about someone successfully cleaning up a pile of laundry after 3 months. It might not seem that significant to some, but for someone with no motivation, that’s huge.

People even created artwork for it. /u/aryeo posted the wallpaper below in /r/GetMotivated. 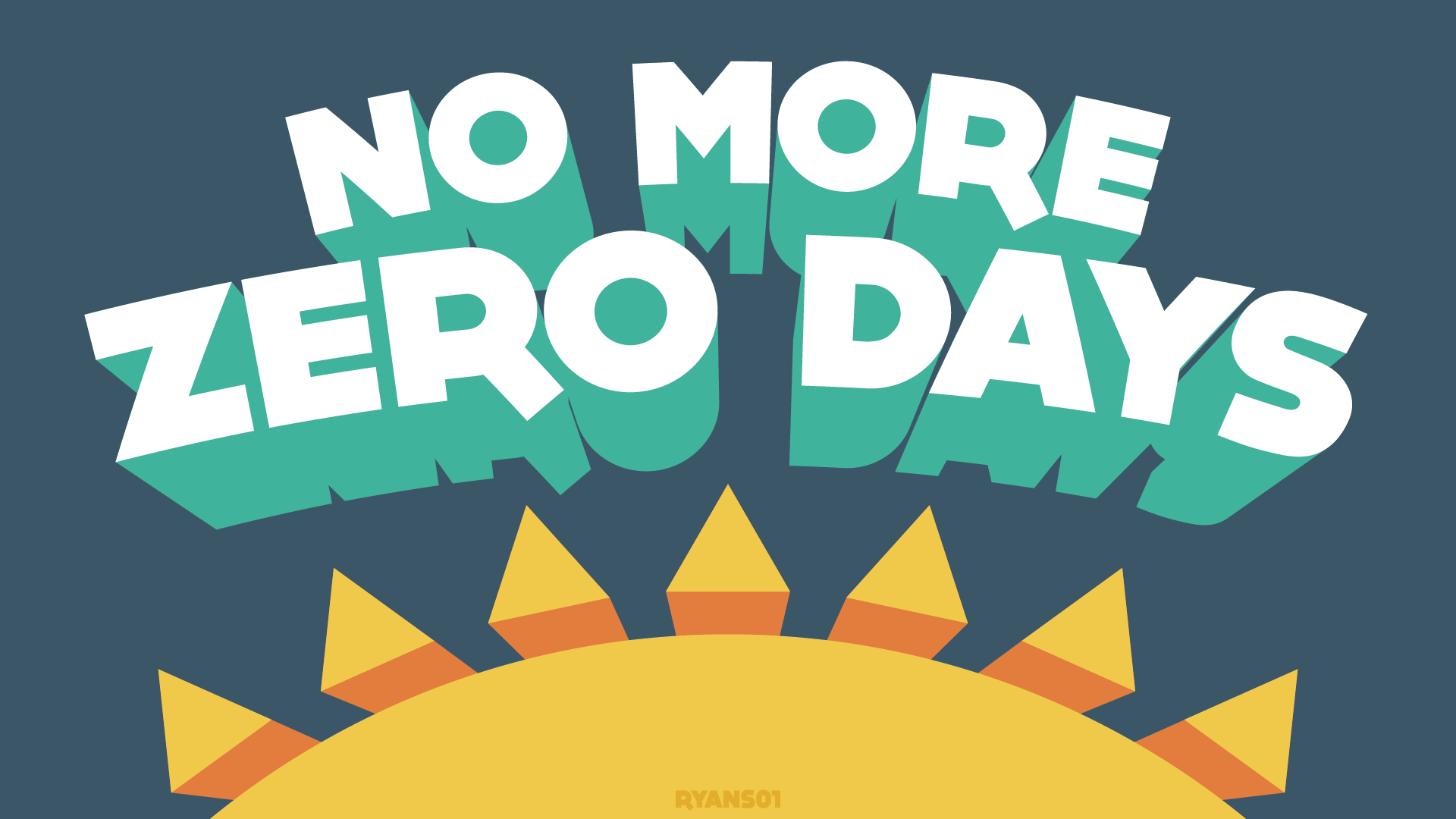 Someone created a basic journal app for Android and iOS to keep track of your non zero days! It’s very basic, but it’s made to simply keep yourself accountable. Also? It’s free and doesn’t have any ads.

Nonzero days, being awesome and the most commonly asked question I get. from GetMotivated

This raw, emotional advice to a stranger reaching out for help has changed lives for the better. It’s so wonderful what one person can accomplish. Hopefully it helps you.

Where to get a 20 oz pint of beer in Calgary