Are there rats in Alberta? Wikipedia can’t decide.

Rats in Alberta, Where Are They?

As we all know, rats are illegal in Alberta. You can’t have them as pets, raise them as pet food, or even employ them in the Government. If you’re caught with a rat, you can face a fine of up to $5000 or jail time or both (exceptions for zoos, universities, and research institutes). It’s serious business and it has been this way since 1950. This program has been so successful, the times that people DO see rats in Alberta, they’re coming in on trucks or trains from neighboring provinces or something like that. I’ve lived in Alberta for over 30 years and have never seen one myself.

Everyone says Alberta is rat free, but is it really? Word of mouth says yes. Everything that shows up on Google says yes. This extremely long and detailed history of rats in Alberta says yes. On WikiPedia, it depends on who you ask.

As you would expect, there’s an entry on WikiPedia for the brown rat (also known as Norwegian rats). It includes all of the typical information about the rodents, their history, diet, family, species and so on, and nothing is too out of the ordinary, except when you come to one specific part of the page…. 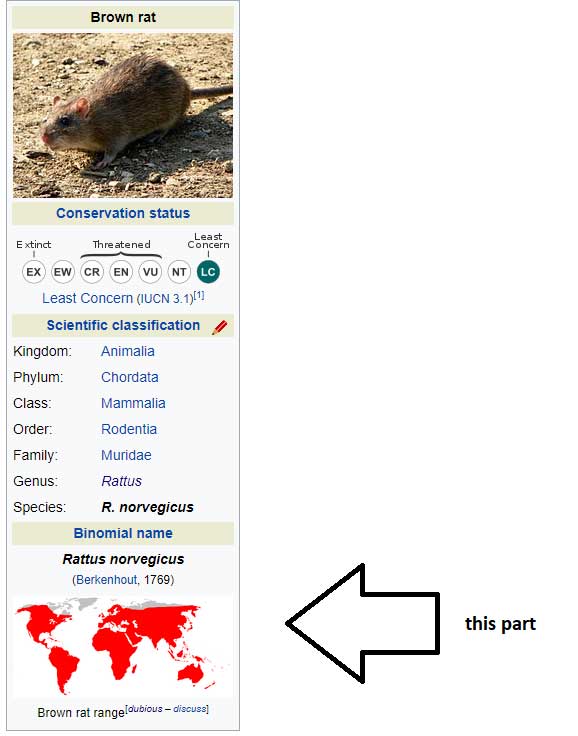 The distribution map at the bottom of that sidebar, which shows in red where brown rats are spread throughout the world, this is what we’re looking at here. On the outside, it looks like a world map right? Well behind the scenes, an epic battle has been taking place for over 10 years that nobody even knows about.

Jrockley created and uploaded the world map to the article that shows where brown rats are distributed in throughout the landmasses. Basically all of the world, except the north. The north is too cold. And there it stayed for over a year.

Someone by the name of Zappernapper made an edit to the graphic, and removed Alberta from the world map. Alberta is rat free, after all right? Snip snip, Canada gets a haircut.

It stay’s this way, until….

Another new user stopped by the name of Lukasz Lukomski and edited the distribution map, restoring the original map which included Alberta, also commenting: “for unknown reasons Alberta was removed – no sources support that claim”.

For the first and only time they’ll show up in this saga, Kurykh drops by to make an edit to remove Alberta, citing the Alberta Governments website (at the time) with a link that now goes to a page on the history of rat control in Alberta.

This TeaDrinker shows up (British?) and re-adds Alberta to the map. Shit!

3 YEARS LATER FinnHK randomly appeared and made an edit to remove Alberta from the distribution map.

This is great — the map was then reverted back, because of “vandalism”.

Random dude Ray181 drops by and once again removes Alberta from the map, saying “Alberta is rat free”.

A few users kept fighting back and forth over reverts, without many comments.

Oknazevad reverts it back to the full map (with Alberta included) saying they did so because “the claim is promotional nonsense.” (that Alberta is rat free).

Shortly after that someone else reverted the map back to remove Alberta. Oknazevad following it up with “The claim is dubious, and the idea that the animals follow the provincial borders exactly is absurd.”.

This is not the last we’ve heard of this genius.

Jackie2541 says “based on claims that source is lying, but without providing a more reputable source” and smashes that subscribe button. Subscribing to the map that has Alberta removed from it.

A2D2 reverts the map back to include Alberta, saying “Brown rats do live in Alberta with a lower population density. That the entire province is rat free is false and they are spotted within its borders.”.

A2D2 won’t have any of it and reverts the map back to include Alberta, repeating their previous comment.

Newcommer Moose1324 tries to comment some sense into them, saying “Literal interpretations of Alberta being rat-free (ie exactly zero rats in the entire province) is being pedantic. Anyone who has lived in Albert thier whole life will most likely never see a rat. Considering that Alberta’s rat population is much, much lower than the rest of the worlds, to the point that infestations are zero in 2017, it can be said that the province is rat free.”.

4 days later, A2D2 reverts the map back again, without comment.

TheSpiritOfTheWest tries to talk some sense into everyone. “You guys should stop editing the map pointlessly. According to all available sources Alberta is rat free. If you wish to change the map, please provide a source stating why it should be changed. Otherwise I will continue to revert the map to this state.”.

Maphobbyist reverts the map back to include Alberta, without comment.

TheSpiritOfTheWest again says “Stop vandalizing the map or provide evidence”, and reverts to the map without Alberta.

A2D2 is back, reverts the map to include Alberta, says the same thing “Brown rats do live in Alberta with a lower population density. That the entire province is rat free is false and they are spotted within its borders.”.

TheSpiritOfTheWest once again replaces the map to exclude Alberta, saying “Give me a source. If you’re willing to say a population density In the double digits for a 650,000 Km² area qualifies as inhabited, can the next map include the oceans too? There are more rats living on boats than there are in Alberta.”.

A2D2 reverts the map once again, saying “The province is not “rat free” https://www.calgarycitynews.com/2012/08/dead-rat-found-in-calgarys-south.html?view=sidebar”

TheSpiritOfTheWest responds “If finding a dead rat counts as not being fat free, the oceans are also not fat free.” and changes the map to exclude Alberta.

Later in the day TheSpiritOfTheWest replaces the map again, and says “If a few dead rats can make a region “not rat free” please include the oceans. If you’re not willing to do that please stop changing the map, as alberta being left out is valuable information.”.

Oknazevad reverts the map back to exclude Alberta, saying “Disputed repeatedly. Stop using the map to parrot a clearly promotional load of nonsense”.

TheSpiritOfTheWest again removes Alberta from the map and says “Show evidence that there is a population of rats living in Alberta. One or two lone dead rats do not indicate there are rats living in Alberta. Aside from people working in science or a zoo, encountering a rat, living or dead, would a very very unlikely occurrence. Now please stop vandalizing the page.”.

Oknazeva reverts the map back to exclude Alberta, saying “Show evidence that there isn’t, and not promotional claims by government sources. As the one making the extraordinary claim, you must supply the extraordinary proof.”.

Newbie Gdex17 reverts the map without comment, to exclude Alberta.

I think Alberta should be excluded from the map. We are rat free! Rats in Alberta are not a thing.

This is where the map stands now, it includes Alberta on the map, within the home range of the Brown Rat, or Norwegian Rat, whatever you prefer to call it. In addition, the WikiPedia entry for Brown Rats does say:

Alberta, Canada, is the largest rat-free populated area in the world. Rat invasions of Alberta were stopped and rats were eliminated by very aggressive government rat control measures, starting during the 1950s. link

Says rat free to me? The map should reflect that.

Why Did Alberta Ban Rats Anyway?

Rats are extremely destructive, contaminating and destroying pretty much everything they come in contact with. Rats were responsible for spreading of the black plague.  They’re easy to breed and really intelligent as well, making them hard to get rid of once you have an infestation. Rats are not only bad news for food, they can be quite devastating to building foundations with their tunnel digging, and chewing holes in things, damaging sewers and all sorts of other infrastructure.

I’ve never seen one, dead or alive. I have spent a lot of time in the city of Calgary, camping in fields, camping in the mountains, in small towns, in and around farms and have not seen a rat or any evidence of rats in Alberta. Rats in Alberta are not a thing! I don’t know why these WikiPedia editors are being so literal.

Thank you Jessica Rabbit for this info!

Have you seen rats in Alberta? Please comment below.

Where to get a 20 oz pint of beer in Calgary

15 thoughts on “Are there rats in Alberta? Wikipedia can’t decide.”