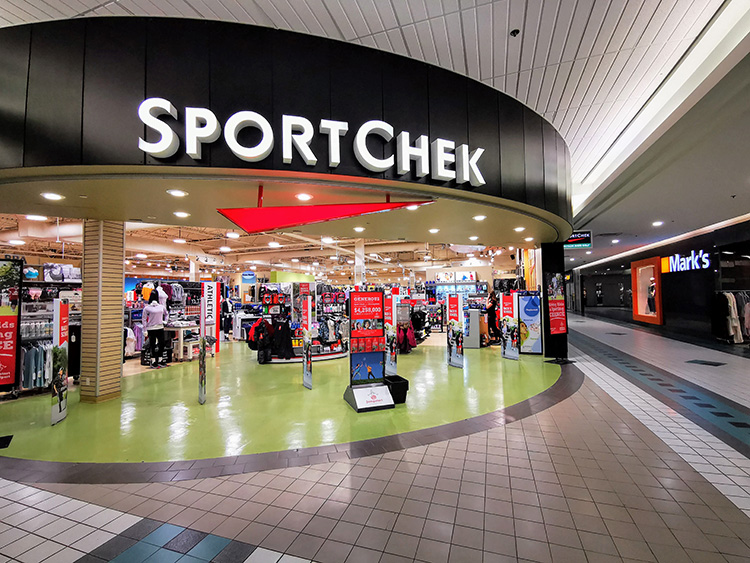 Have you ever thought about calling downtown Calgary home? Moving to the core to be in the middle of it all? Close to work, bars and clubs, events, restaurants, that fast paced city life? We’ve been living downtown for well over 10 years now, and honestly It’s a blast! There’s always something to see and do, lots of places to go for walks, funky places to take photos, and there’s a nice variety of stores and services available within mostly walking distance. While downtown Calgary has a lot of things, it doesn’t have everything. Westbrook Mall is close to downtown and very easy to get to on public transit, so we do most of our every day shopping there, other than a few things like Milk at the downtown Safeway. We’ve actually been going to Westbrook Mall long since before the c-train ever did, long before the condos across the road existed, even before the internet existed. Shout out to Dewey Stevens 25¢ draft night!

We’re giving away 3x $50 Walmart gift cards at the bottom of this post!

Full disclosure as always: this is a sponsored post. We visit Westbrook Mall so often that we decided to reach out to them and ask if we can work together, and they agreed! 100% of everything is our own honest opinion.

Getting There From Downtown

From anywhere on 7th avenue downtown just hop on a blue line train (69 ST) and it takes no time at all to get up to Westbrook station. Getting home is just as quick but in the opposite direction. We live right beside 8th street station, which is super extra convenient. You wouldn’t believe the things we’ve been able to bring home from Walmart on the train. If you don’t live within reach of the train, there’s several bus routes that feed into Westbrook such as route 9, route 70 and route 111. Easy to get to from any direction.

Westbrook Mall is the closest shopping mall outside of downtown and it’s variety of stores have almost everything you’d need for your day to day. Walmart for almost everything, Safeway, Marks, EB Games, Bentley, Sport Chek, Shoppers Drug Mart, A Buck Or Two, Bank of Montreal, Westbrook Family Chiropractic, a couple barbershops and salons, Pearle Vision, Spa Lady, Phamtastic Nails and even a Dollarama (beside Walmart, outside of the mall) – see the full store directory.

Did you know Calgary has a piano bar?! Aussie Rules.

Here’s What We Usually Visit Westbrook Mall For 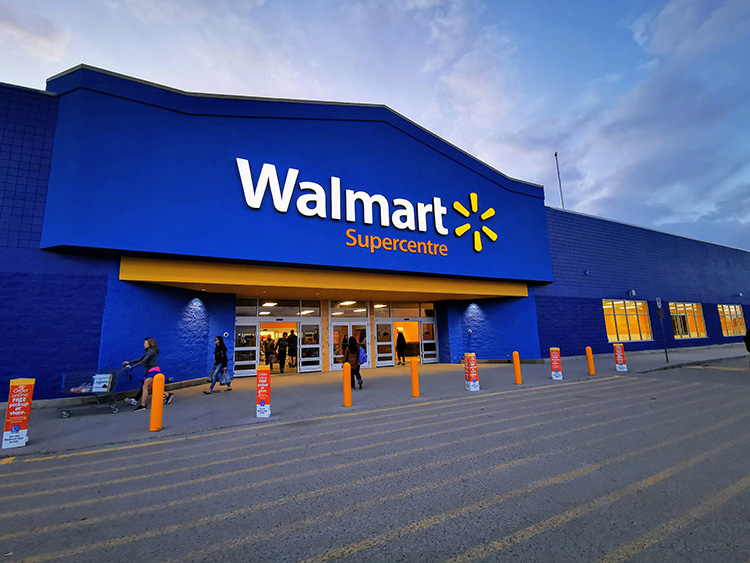 Walmart is on the south end of Westbrook Mall, which is only a short walk from the Westbrook c-train station. It’s the primary reason we visit Westbrook Mall so frequently, as it has pretty much everything we need, and donairs in the mall foodcourt (more on that below). Westbrook Walmart is open from 7 AM until 11 PM every day. Our primary needs: groceries, clothes, pet supplies, gardening supplies in the summer, and of course video games.

This Walmart Supercentre also has a photocenter in it, which we’ve used several times to make prints of our photos. You can print photos on your own too using their automated kiosks, just bring the photos in on a USB drive or on your phone and go through the menus on the touchscreen. The only time you have to talk to a human is when paying for them.

In addition to that, Westbrook Walmart also has a walk-in medical clinic. I’ve found it to be very fast with little or no wait time whatsoever and have visited several times. My family doctor takes 3+ weeks to get in to see, and he’s in Whitehorn, so having quick access to a doctor can come in handy. 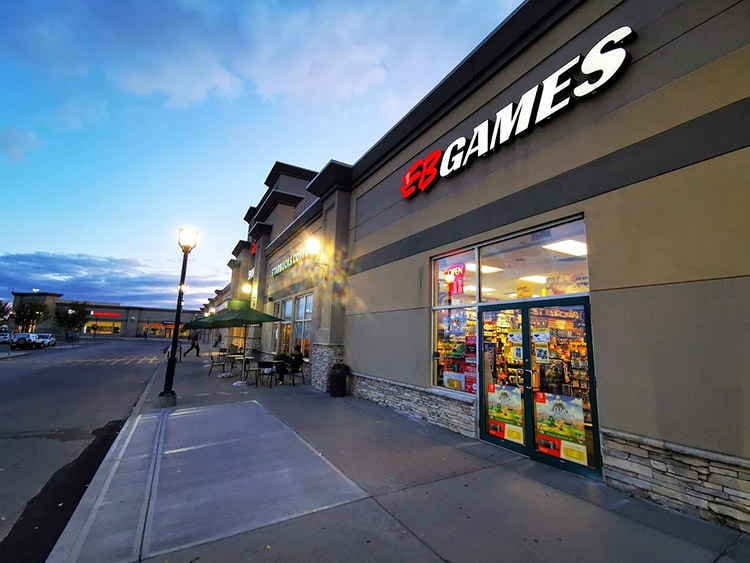 Many times I’ve stood in line outside of this EB Games for a midnight release. The best was Super Smash Brothers Brawl, way back when for the Nintendo Wii. It was a big deal and there were hundreds of people waiting outside for pre-orders. Someone was driving back and forth blasting Smash Brothers music from their car to keep everyone entertained. It was beautiful.

Pro-tip: As Westbrook has both EB Games and Walmart, make sure to call them both when you’re trying to find something around Christmas like a Nintendo Classic etc. 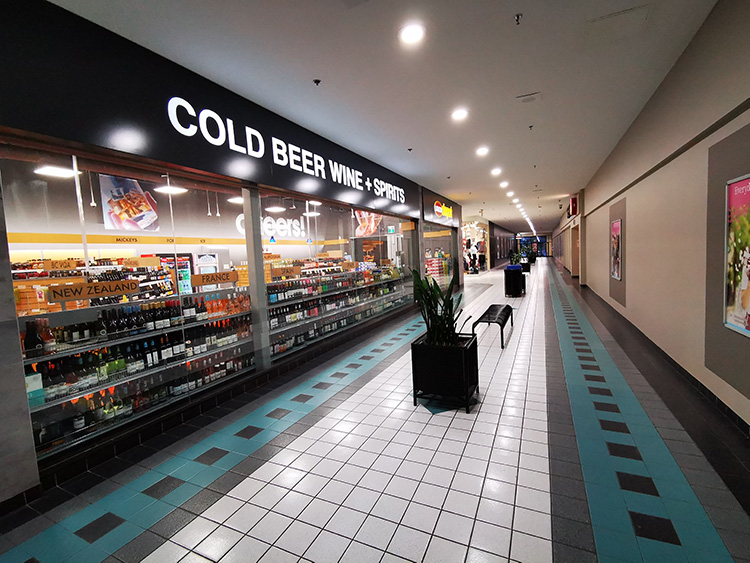 Ya ya it’s just a liquor store, but Liquor Depot specifically is one of the better ones in my opinion. They have a really diverse selection of products and have decent prices. Having a place to buy booze under the safe roof as groceries, donairs, clothing, new shoes, hockey jerseys, home appliances and haircuts is pretty handy.

Mrs. CM has been going to Westbrook Mall exclusively for their donairs for over 30 years. The My Donair counter in the Westbrook food court has been operated by the same family forever, and they simply make really good donairs. 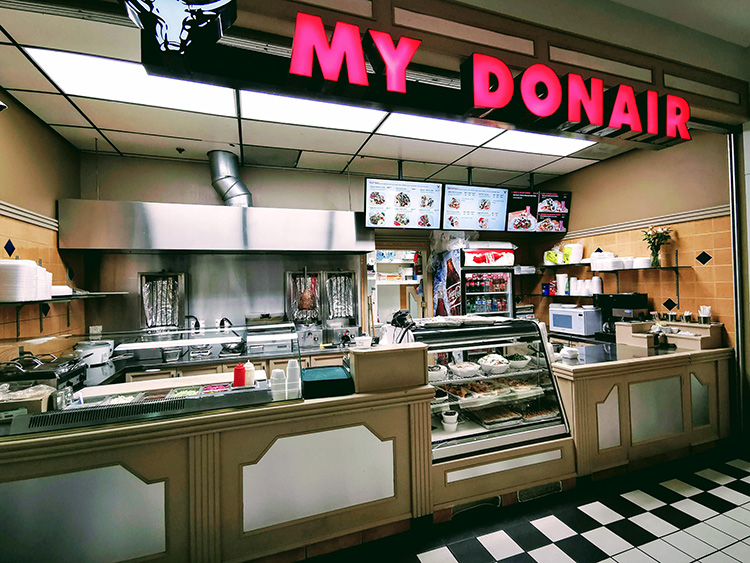 Their large beef donairs are what we normally order, with cheese. They have other things you’d expect like Shwarma and Baklava too.

The best part of my job teaching in a preschool is the My Donair lunch that follows as my reward for surviving. #yyc pic.twitter.com/85nLX8J2h3

You might find this a little weird but Mrs CM puts cheese on her donairs, as you can see in the above tweet from 2014. I personally don’t mind it either way, a little cheese is nice sometimes. Some people take the art of consuming a donair very seriously and follow a strict set of rules, which never includes cheese.. but that’s what she does. What’re your thoughts? 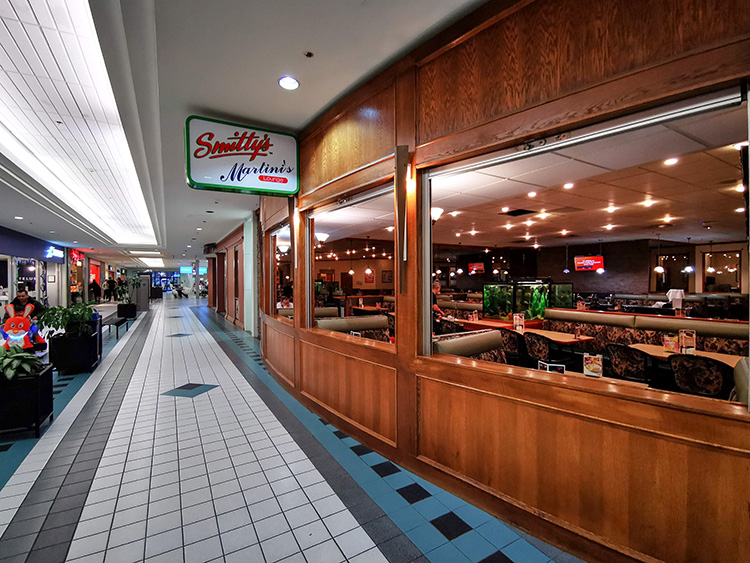 Smitty’s in Westbrook is a great place to visit for breakfast food! There’s usually room, unless you’re going on a Sunday morning. Really like their hash brown skillets. 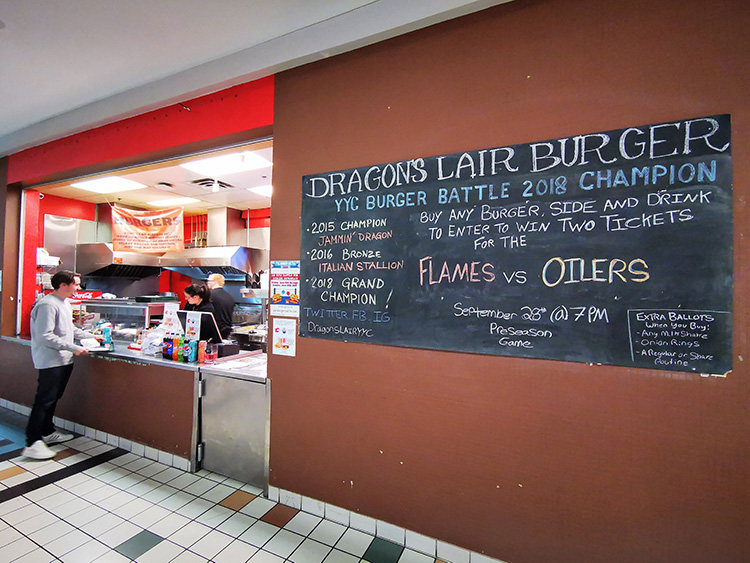 Dragon’s Lair Burger not only makes an excellent homemade burger, but their Christmas Dinner Poutine is always a treat around the holidays. A quick Christmas dinner you don’t have to cook yourself?! Get in on that! 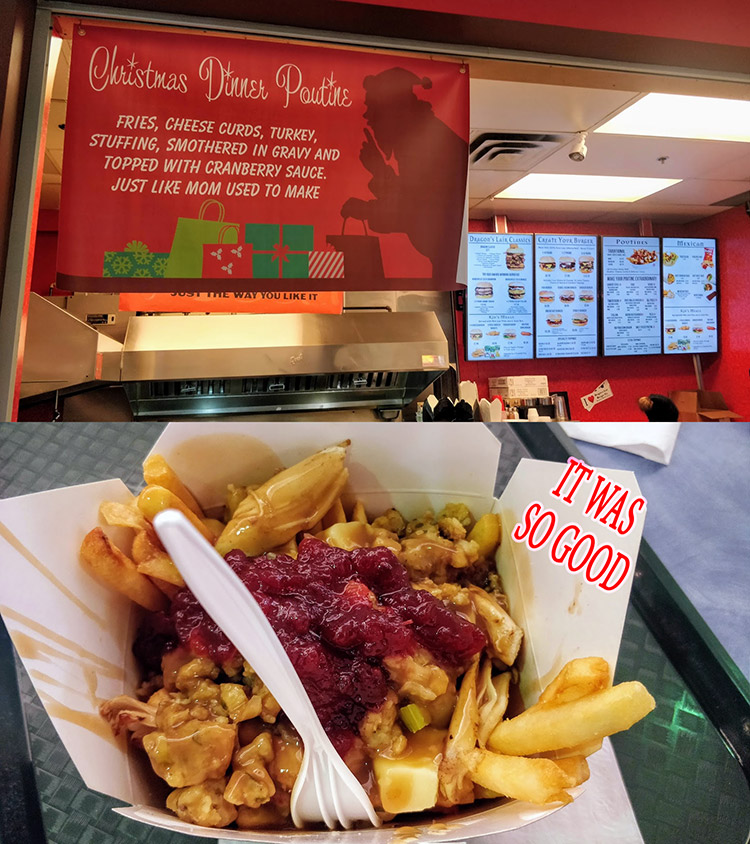 They have a kids play ship right beside the food court, if you have kids with you when stopping for a food, things like this can be such a blessing. 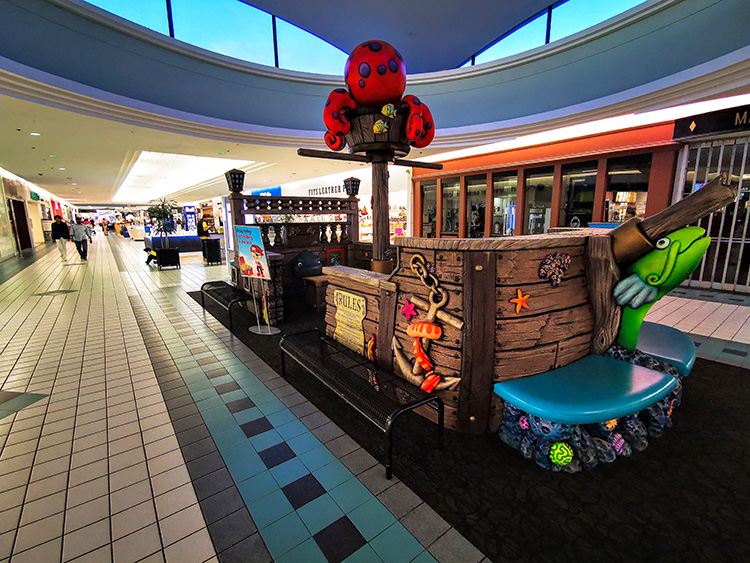 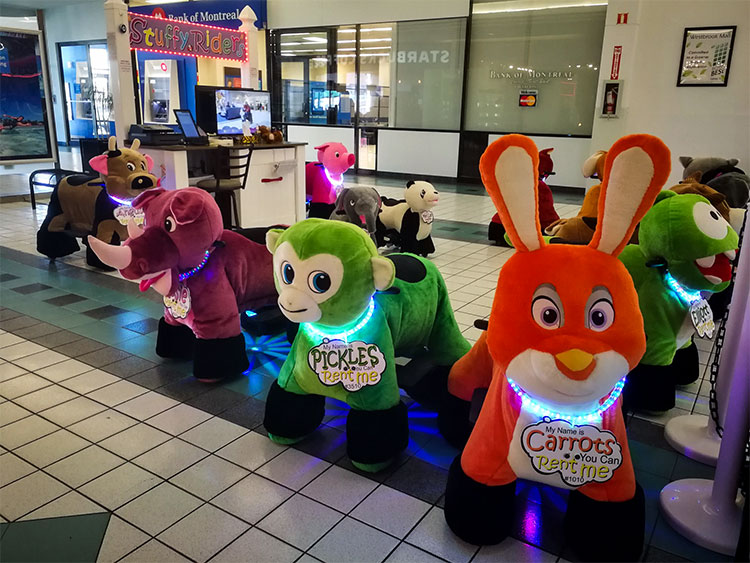 You can rent these and ride around the mall! StuffyRiders support both children, adults, or both 😉 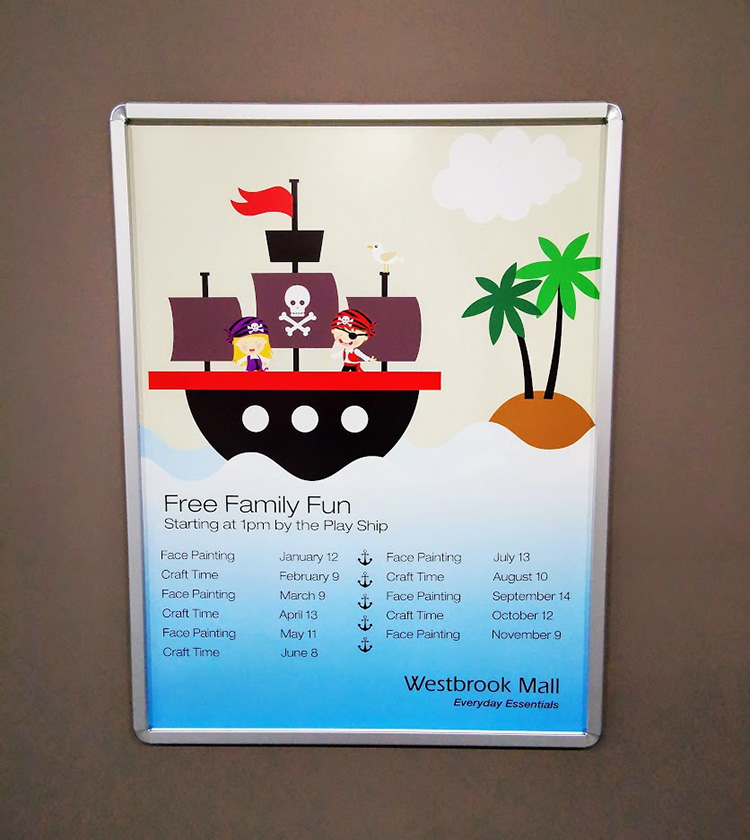 Once a month they have free face painting and craft time for kids or adults who just like to have a good time.

On Saturday October 26th Westbrook Mall will be hosting a Halloween event in support of Cystic Fibrosis Canada! It’s for kids 12 or under – there’s free crafts, face painting, and a Halloween photo with a donation of $2 or more. Great cause. 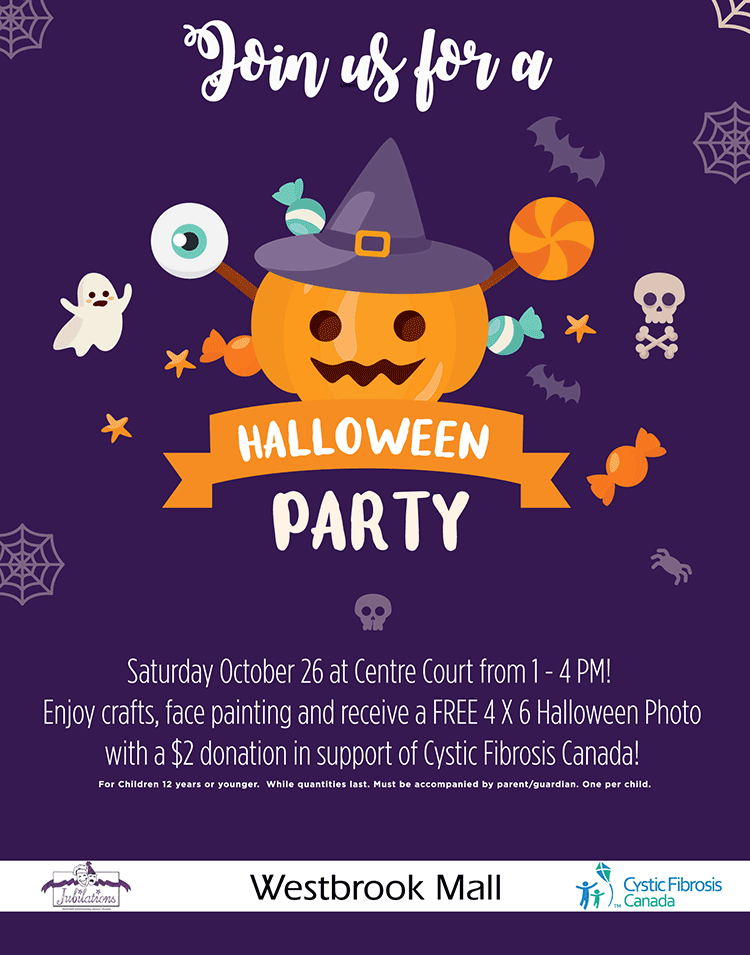 They also put up a wonderful Christmas display at the end of November, Santa included.

Westbrook Mall has graciously donated THREE $50 gift cards to Walmart for you to win. We’ll be giving them away over our social media accounts, one on Facebook, one on Instagram and one on Twitter. If you enter on all three you can potentially win $50 x3! Best of luck! Instructions below. Thank you Westbrook Mall for the gift cards and opportunity to do this.

Contests run until October 31st 2019, 10:00 PM Calgary time. Once the winners have been randomly selected, we’ll reach out to you on how to collect your gift cards! Best of luck to everyone, and happy Halloween.

We’ve been going to Westbrook Mall for a very long time and will continue to do for as long as we live downtown. It might not be the biggest mall in Calgary but it’s close to us, and has almost all of the amenities we need.