Recently pictures and stories of ‘killer clowns in Calgary’ have been circulating the local social medias. Even though clowns aren’t scary to most people, they can certainly be if seen standing in front of your house at 3 in the morning, or hiding in the bushes, or scrubbing out your shower.

Even though this kind of thing dates back to at least the 1980’s and happens all over the YouTubes, recently it’s been taking off in the United States in the past couple months, with people even reporting clowns have even attempted to lure children into the woods for large amounts of money. 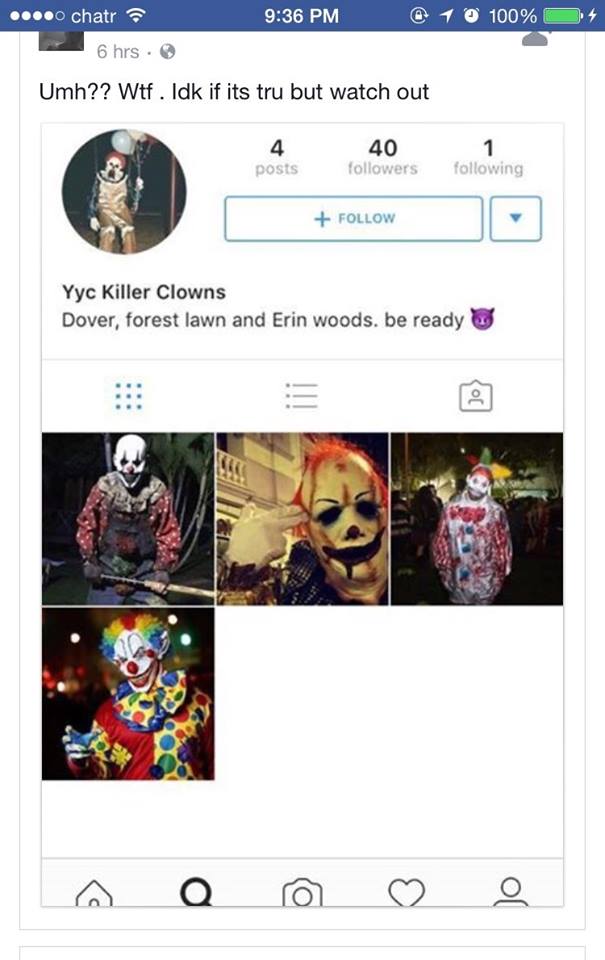 RollingStone refers to it as a hoax, that it’s just people just trolling other people because lulz. There have been no actual arrest reports or murders or real evidence or anything of the sort from this meme. Snopes has also chimed in about a story of killer clowns coming to Canada and murdering 23 people, and of course, it’s fake.

There have been a few clown accounts that have popped up in Calgary, with @YYC_clowns even including a phone number in their contact info. I called it and someone answered with ‘hello daddy’ so I hung up, 2edgy4me.

They have similar pictures.

An anti-clown Facebook group has been set up to help erode the killer clown safe space that has been a thorn in our side for far too long. May Nicolas Cage smile down upon thee and offer his grace and protection

The Calgary Police confirmed that dressing like a clown is perfectly legal, so you’re free to wear your favourite non-flames teams hockey jersey out in public. Haha burrrrrned!!

There are no laws against dressing like a clown. However, if you feel someone is suspicious report by calling 403-266-1234.

So yeah, just some good stupid harmless fun for October. Clown around at the wrong place at the wrong time and you’ll get beat up, remember that if you’re thinking of joining in, yey!

2 thoughts on “Have You Seen Any Killer Clowns in Calgary?”

Leave a Reply to me Cancel reply