For years people have been talking about Calgary getting a permanent rainbow crosswalk, and in 2018 it actually happened! MRU had one installed. However in July of 2019 Calgary Pride and The City of Calgary (plus some other orgs of course) came together to install not one but two of them right downtown! Downtown Calgary now has a permanent LGBTQ+ rainbow crosswalk, and a trans flag crosswalk a short distance from each other and right in front of the Calgary Tower! The location couldn’t be better. It’s filled with tourists, downtown dwelling Calgarians, club goers, people who work and play downtown, families, everyone will get a chance to check it out. The bigots might not like it, but they can shut the hell up. Calgary is a wonderful city and we welcome everyone. Love is love is love.

The new pride rainbow crosswalk and the trans flag crosswalk are being paid for by private donors, not the city! Zoom Painting will be taking care of the pride crosswalks for 10 years. That’s so awesome of them, thank you! And thank you to the rest of the organizations and teams that came together to get this done.

Why Rainbow Crosswalks Are Important

We reached out to our friend Ryan from Immrfabulous.com to comment on what this means to him, and why things like this are important.

In our not-so-distant past sharing our pride was illegal in Canada… And although impossible to erase the injustices in equality the LGBTQ community has faced and still faces today; having a nod to our community’s strength, perseverance and fight permanently on display reminds us not only of how far we’ve come, but reminds us that we still have so far to go. For me, these PRIDE walks are to honour and pay respect to us and our allies who have seen their families suffer. On a global scale It is currently a punishable crime in over 70 UN member states for members of LGBTQ community to openly share their pride. Calgary’s Pride walk shares our advancement.

The rainbow crosswalk is right between Milestones restaurant, and Modern Steak/The Hyatt Regancy . It’s not exactly where you’d expect to find a crosswalk, but I love the spot they decided on. 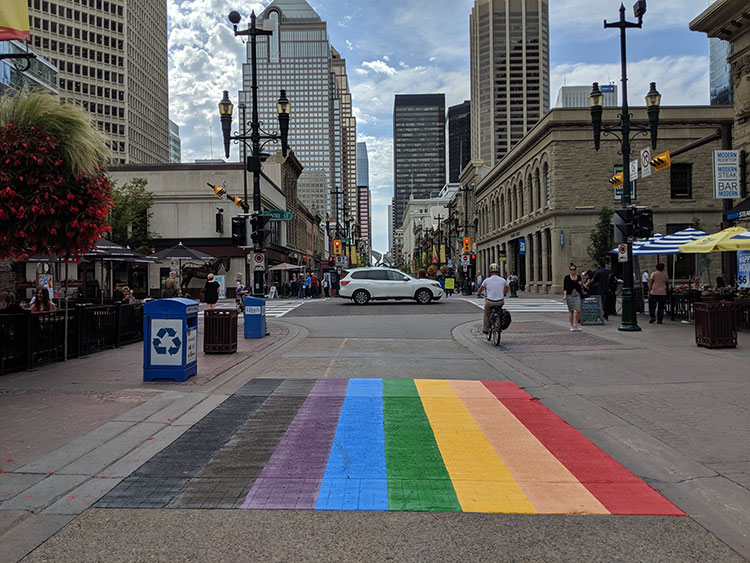 On Stephen Avenue, just on the west side of Centre Street is a transgender pride flag crosswalk (trans flag), which is comprised of only three colours, blue, pink and white. This design was created in 1999 by an American trans woman Monica Helms.

This is not the official trans pride flag, because there is no such thing as an official trans pride flag. According to Wikipedia, unlike the other LGBTQ+ communities around the world which have generally adopted the rainbow flag as their symbol, the trans communities and organizations haven’t come to a consensus on one design to represent everyone. The trans flag painted in Calgary is the most widely used version, but there are a few variations out there! 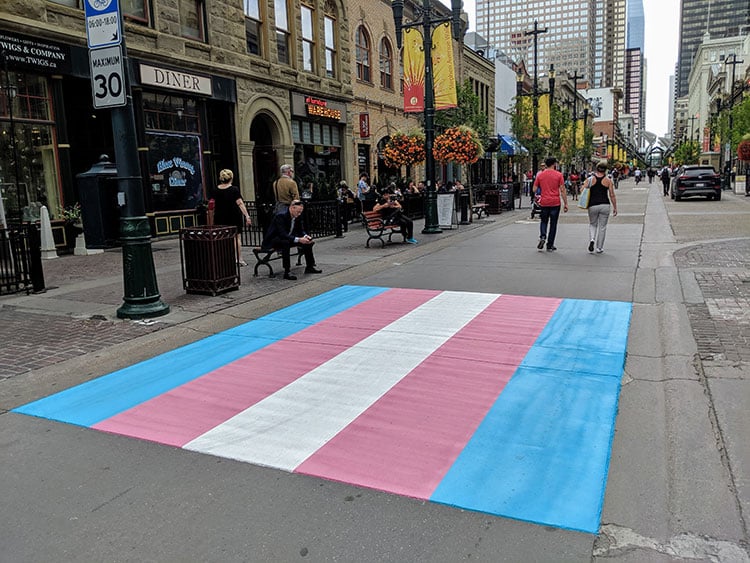 Blue, pink and white are the colours of the trans flag crosswalk in Calgary.

Calgary Pride issued a press release regarding the rainbow and trans flag crosswalks.

Calgary Pride is thrilled to confirm that the rumours are true!  On Sunday, July 21, Calgary is getting its very own rainbow and trans flag crosswalks on one of its busiest pedestrian and tourist roadways, immediately east and west of Centre Street on Stephen Avenue.  This wonderful symbol of diversity and solidarity would not have been possible without the collaborative efforts of Calgary Pride, Calgary Queer Arts Society, Centre for Sexuality, Skipping Stone Foundation, Treaty 7 Dyke and Trans March, and Voices; as well as special support from Cllr. Evan Woolley and Cllr. Druh Farrell, the City of Calgary Roads Division, and our friends at Zoom Painting.  Zoom Painting was also integral to the permanent crosswalk installed at Mount Royal University last year, and have committed to painting and maintaining these new crosswalks for up to TEN YEARS!

The location of Stephen Avenue was chosen based on several criteria, like the location’s high visibility, high pedestrian impact, lower vehicle traffic, and lower construction disruptions.  Calgary Pride consulted with local organizations serving the Gender and Sexually Diverse (GSD) community, and contacted businesses immediately adjacent to the new crosswalks. We are pleased to share that local businesses provided glowing messages of support, hugs, high fives, and messages of “well, it’s about time!” in support of these colourful landmarks soon to brighten their doorsteps.  Working with the Calgary Downtown Association, Calgary Pride and Calgary Queer Arts Society will be inviting adjacent businesses to attend free diversity and inclusion training in the coming months. In the interim, and ongoing, we encourage all small businesses, non-profits and corporations to access resources at Pride at Work (prideatwork.ca) and Human Rights Campaign (hrc.org) to better understand both the social and business benefits of LGBTQ2S+ inclusion.  It’s also worth noting that businesses with cultures of respect, that embrace and support gender diversity, are at the forefront of talent acquisition and retention.

Calgary Pride is proud that both trans and racial representation is seen in the two flag designs chosen; this is not a statement that Calgary Pride or Calgary are as inclusive and diverse as we need to be, but instead a reminder of how far we’ve come, an ongoing commitment to never turn back and a pledge to continue down the path for all Calgarians to feel a sense of belonging.

The first rainbow crosswalk in Calgary was installed in 2015, in front of the municipal city hall building. The costs were shared between the Calgary Pride organization, and  The City of Calgary, ar around $4000 to install/remove it. This was the one and only time that the rainbow crosswalk in Calgary was in this location. From 2016 – 2018 they painted the rainbow crosswalk across the entire intersection of Stephen Avenue and Centre street. The costs were also shared by regular Calgarians directly too.  A GoFundMe was created in 2016 to help cover the costs, which received way more than they asked for. Go Calgary!

Did you know that the original rainbow flag had 8 stripes? Each one with their own meaning and purpose. The rainbow flag we mostly use today only has 6 stripes. Check out the history on Wikipedia.

We felt this was something long overdue. Calgary is a wonderful city full of some very loving and caring people and it’s nice to have some recognition of that, y’now? Ps. Did you know Banff has a permanent rainbow crosswalk too?