Contacting all Trekkies! And non-Trekkies. TELUS SPARK has brought Star Trek: The Starfleet Academy Experience exhibit to our fine city, and it’s absolutely worth checking out. Unless you really dislike Star Trek. I mean, you’ll probably enjoy it, but it’s really geared towards people who like the series or at least have watched it. I was lucky enough to be invited to attend on their media preview night, and I went through the whole thing, so I figured it would be fun to write about it – and answer any questions, if there are any. Drop in a comment below.

It runs from February 4th, until June 4th 2017. Tickets can be purchased here.

Excellent question, ensign. The Starfleet Academy Experience is an exhibit that puts you through the Trek paces, like you’re actually going through the Star Trek academy for reals. You answer Star Trek trivia, demonstrate how well you can speak Klingon, shoot a phaser, use a tricorder, use a transporter, practice flying a ship, and you even get to run through the dreaded Kobayashi Maru test (it’s a no-win situation). Fun fact: James T. Kirk cheated to beat the test, but that’s Kirk for you. You’ll work your way through the immersive environment, all while being graded and evaluated, to see what your potential is and what kind of officer you would make. Careers as Medical officers, Science officers, Communication specialists and even as Commanders are possible. You’ll get e-mailed a snazzy certificate at the end, provided you enter in your e-mail. 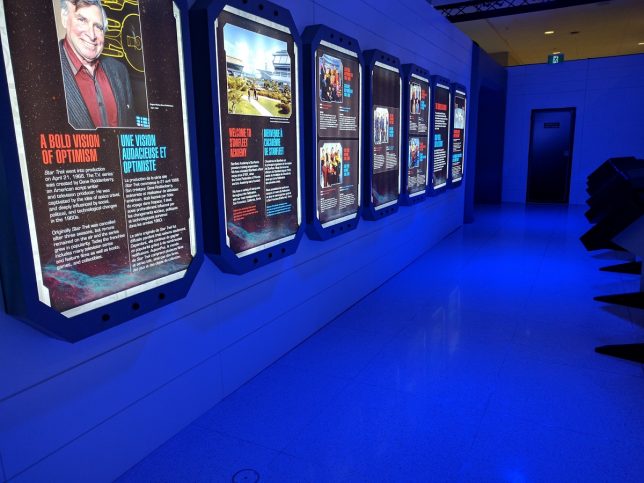 When you get there, you strap this Star Trek wristband on and enter in your information in a terminal, which will keep track of your results. Think of it like a FOB key, but tied to you. No, you don’t get to keep it. Every station you visit to run through the tests and exercises, you first ‘tap’ your wristband on it to register, then it immediately moves into the questions. Very seamless and fun. 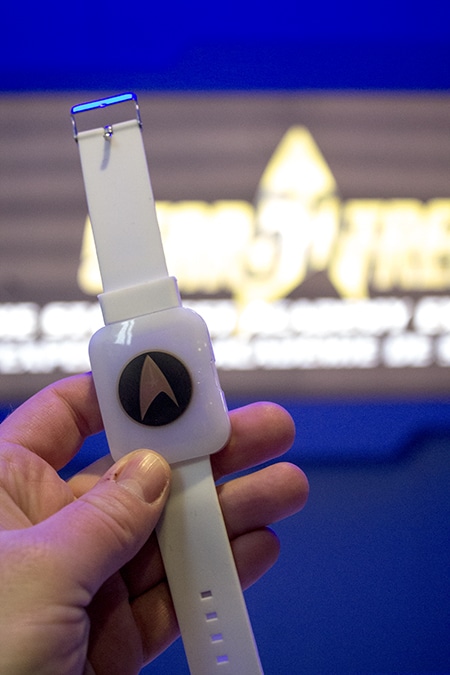 As soon as you enter, after registering your wristband, you make your way down a corridor that’s lined with a really detailed timeline of the Star Trek universe, as well as a number of digital posters with tons of information to read (presented in both English and French). You can learn about the series’ history, actors, who created the show and so on. You’ll want to give yourself at least two hours to make your way through the exhibit. In addition to taking part in the stations and reading things, you’ll probably spend a lot of time talking with other visitors and the staff members present throughout. They’re loaded with interesting relevant information and other tidbits.

The first station is just around the corner. You get to scan an injured Klingon laying on a sickbay bed with a tricorder (then you diagnose him based on your findings), which I actually got right! Protip: scan his crotch. Why? Well how often do you get to scan the crotch of a Klingon with a tricorder?! From there you can check out a bunch of costumes and props, until moving on to the phaser training. Don’t shoot the red ones. It’s kind of like a Nintendo Wii game. I scored a mediocre 30/50. There are quiz stations scattered throughout, so if there are any lines for the interactive stations, you’ll have something to do. The questions are pretty fun too, like, which doctor is the best doctor? There is no right answer, it’s your own preference. That said, the right answer is Bones. Duh.

Star Trekking Across The Universe

The entire exhibit is very well put together, with glowing wall panels everywhere, bulk heads, and generally just a really cool Star Trek look and feel. It actually has an IKEA vibe to it too, laid out to guide you through from beginning to end without missing anything.

Here’s a quick video I threw together. At the end it has Harry Kim, Geordi La Forge and William Riker being interviewed by Global.

The Starfleet Academy Experience is a timed event, which means only a certain amount of people can be going through it at any given time, and tickets need to be purchased ahead of time online. Because there’s numerous things to read, and stuff to see and interact with, it wouldn’t be a very fun experience having to wait in lines or fight with anyone. Unless you’re fighting Gorn. Gorn would be fun to battle. If you don’t know who that is, I am sad for you. 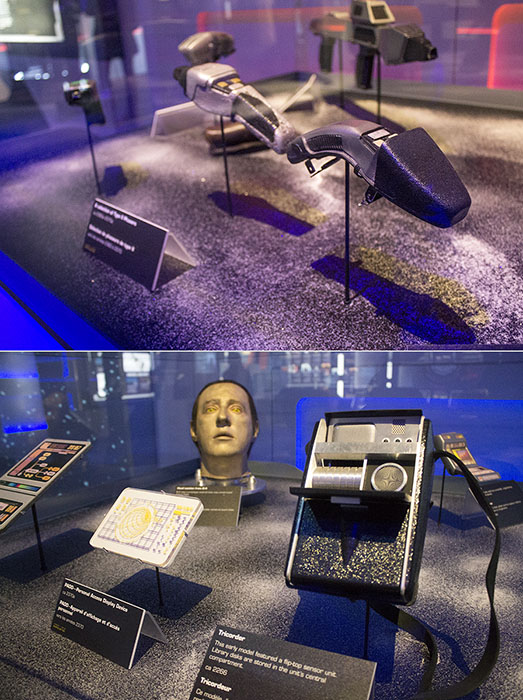 In addition to quiz stations scattered throughout the exhibit, there are also a number of actual props and clothing that were on the shows! The majority of them provided on loan by a man named Martin Netter, who is the worlds largest private collector of Star Trek memorabilia. He’s got over 50,000 items in his collection, including costumes, uniforms, weapons, original films, models, scripts, photos and even the original computer terminals. He was at the event when I attended, but I’m not sure if he’s there all the time. He’s probably a very busy guy. Martin was quite proud of his collection and had no problem talking with me about it. Cool guy. We talked about the Borg costumes and how uncomfortable they are to wear in person and how not scary they are in person, but, how scary they looked on TV. Plus, he’s extremely bearded and I’m totally jealous.

This exhibit was very cool, I really enjoyed it, and I’m not the biggest Trekkie ever. Thank you very much TELUS SPARK for the invite!

It’d make a wonderfully geeky date night. Check it out.

Eating A Feast At Bonterra Trattoria