Every year, for no reason other than because they can, Calgarians dress up like zombies and assemble downtown to walk the streets and parade through the beltline. From dirt and makeup to elaborate and realistic looking costumes, the zombies put on a great show, both delighting and scaring the crap out of those who didn’t know it was coming. 2017 marks the 12th year in a row for Calgary, after really picking up steam in 2006-2008.

This year will be no different. The Calgary Zombie Walk takes place on October 14th, 2017. Check out the Facebook event here.

From noon until the time of the walk, meet up with other zombies at Olympic Plaza to put the finishing touches on make up and costumes. Take photos, practice your zombie moan, learn how to slowly lurch and shuffle. On site will be make up artists, prize draws and something a little different this year – there will also be vendors. This event has gone from a small gathering of a few zombie fans, to a crowd of hundreds if not over a thousands of zombies filling the streets. 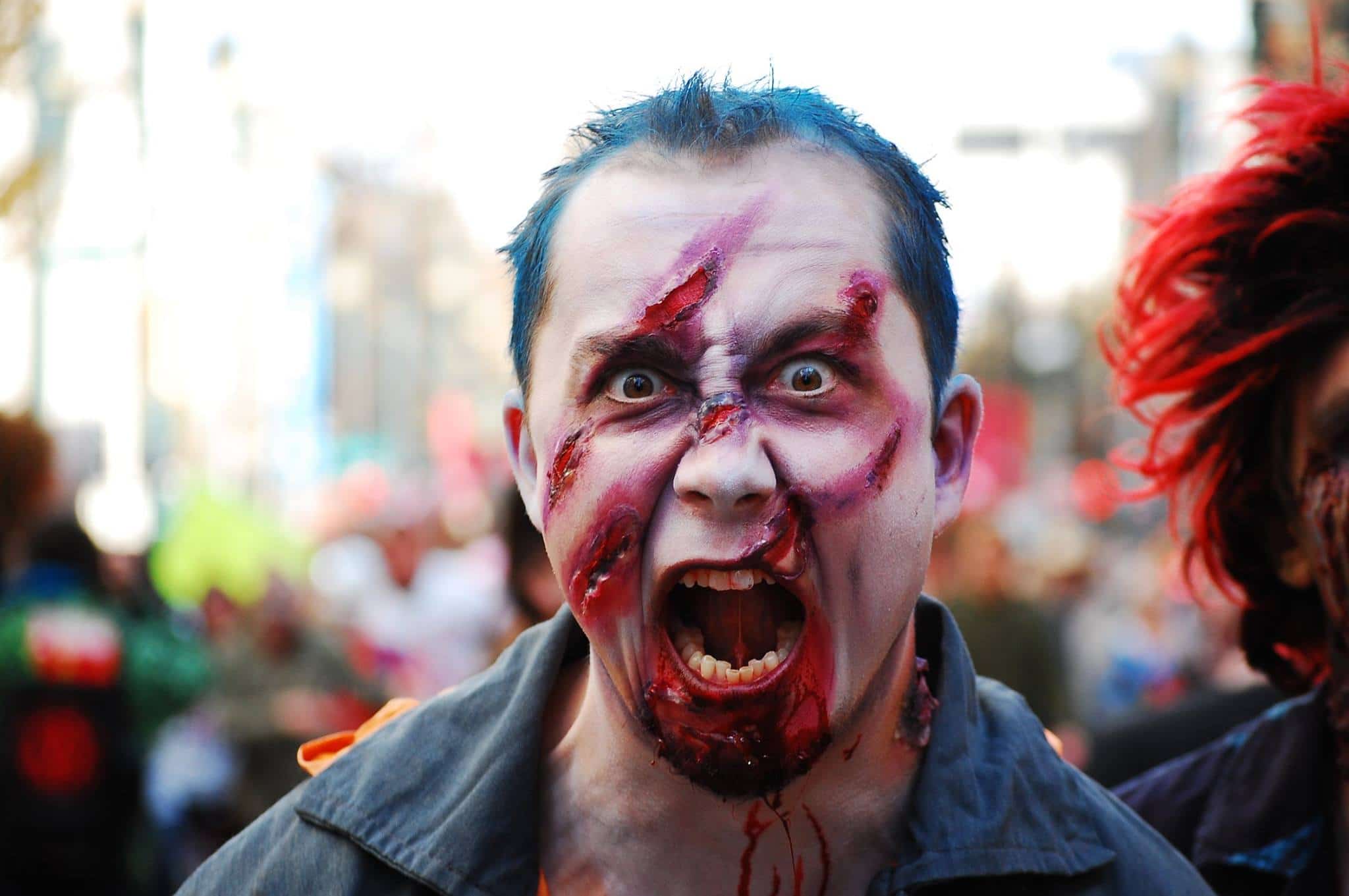 See below for a map. Zombies will make their way from Olympic Plaza to the park on 17th ave sw. The 2017 route is no different than previous years, however it ends at Thomkins, rather than going to Shaw Millennium or anywhere else. 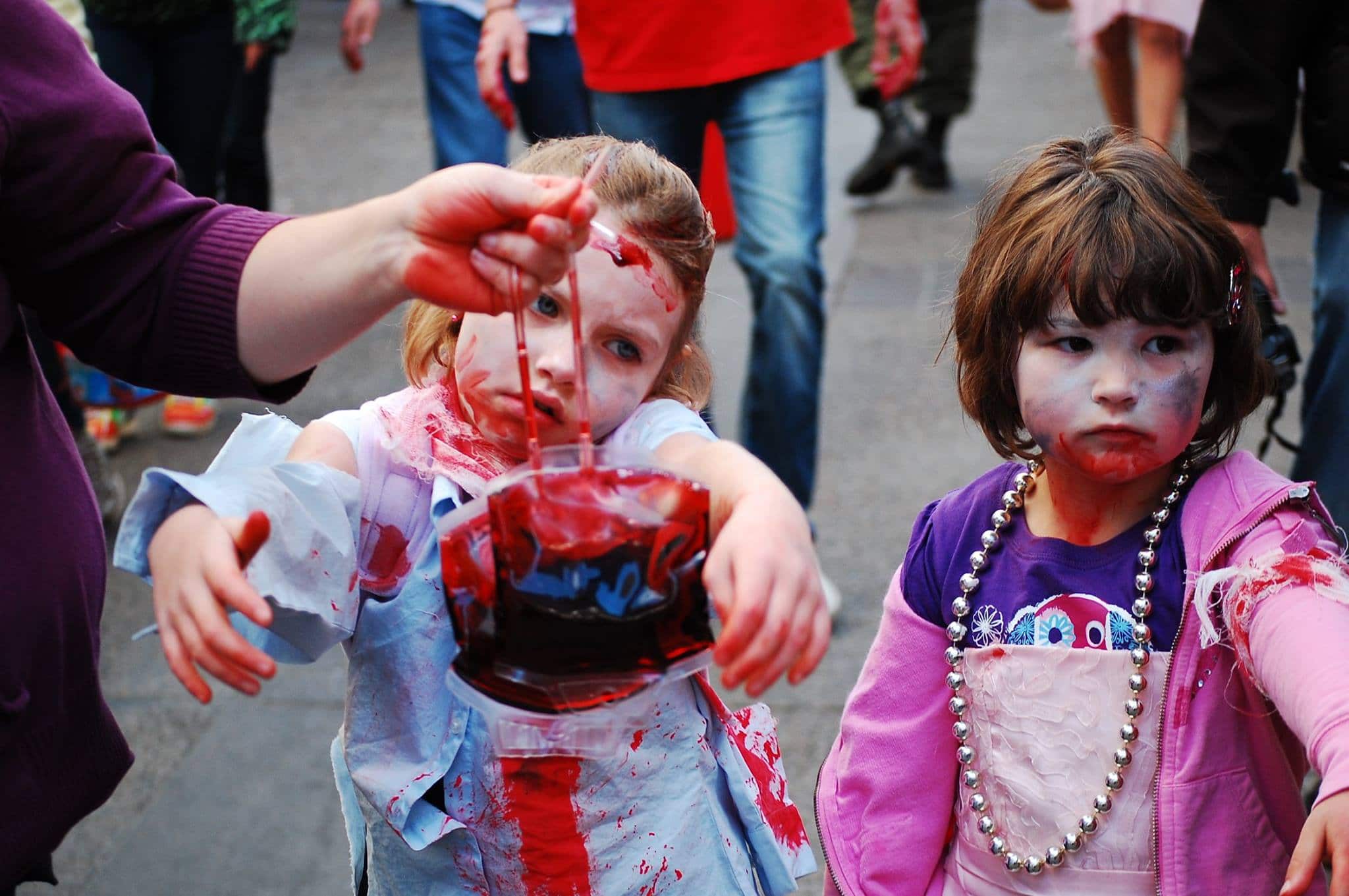 As with everything in life, and death, there are rules the zombies must follow. There have been instances in other cities of zombies doing stupid shit like breaking windows and getting themselves arrested. Don’t do that. Be a good zombie. pats head

Be loud and proud and undead but make sure to clean up after yourselves and don’t be a dick to anyone. It’s all about having a good time and being a random group of zombies crawling through downtown for some reason. There will be lots of children too, don’t forget that.

Don’t be a bad zombie.

The organizers of the Calgary Zombie Walk have acquired a number of prizes that you can win from a raffle.

In the past, prizes included horror themed toys, action figures, and other things that had been donated or sponsored. Please don’t bring clam nectar or pumpkin pie filling. The Calgary Food bank has so many clients that need food, if you can, donate stuff like canned veggies, fruit, soups, chili, Kraft Dinner, rice, etc. 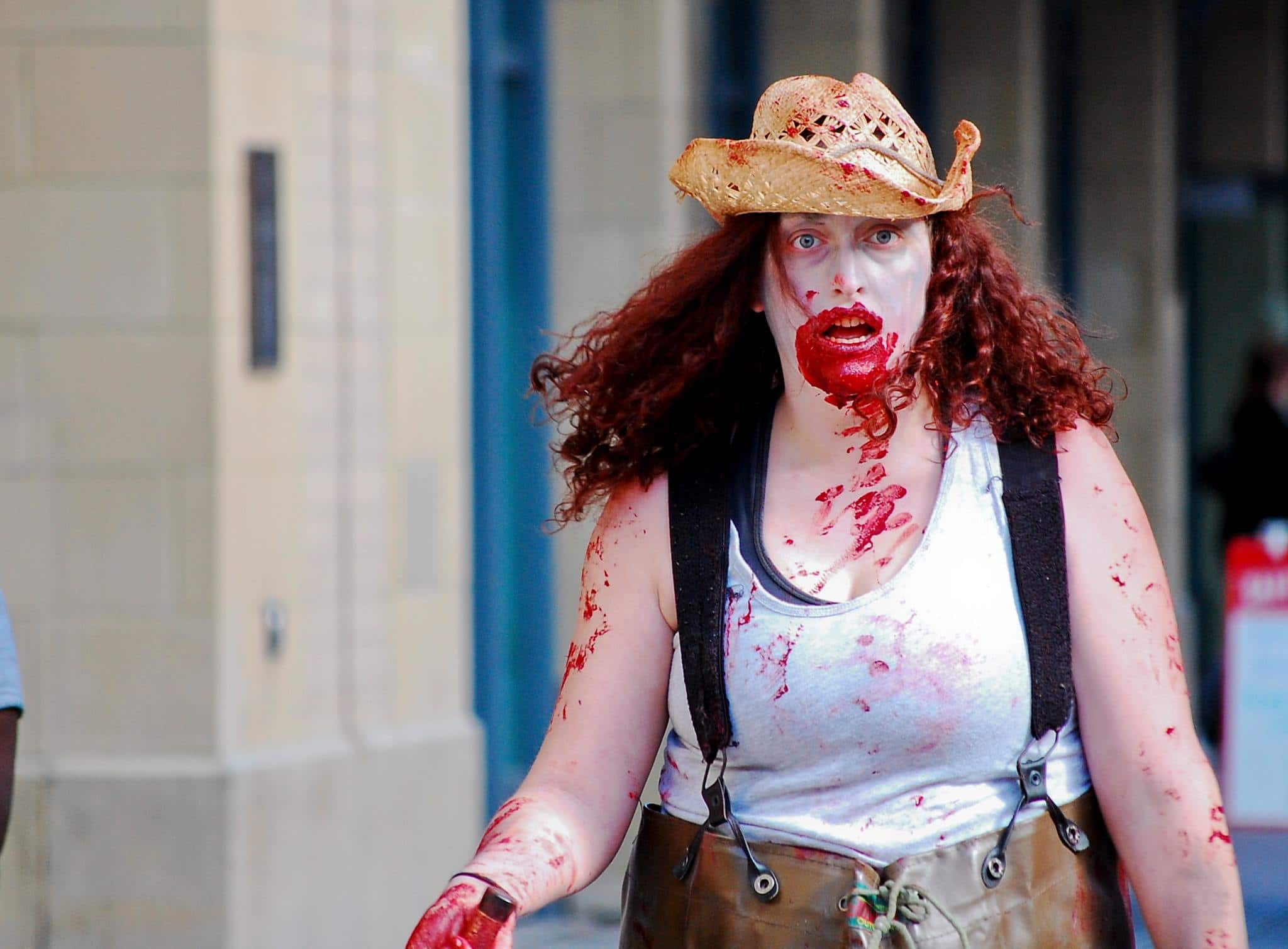 One of the first zombie walks on record took place in 2003, in Toronto, with only 6 zombies participating. 2004 saw additional walks, including a Vancouver Zombie Walk, which was the inspiration for the Calgary Zombie Walk (more on that below!). The very first zombie walk in Calgary was organized by a local fellow named Chris Patrick Carolan.

Chris made a post on ZombieWalk.com, describing the upcoming walk in Calgary, which took place in 2005 on October 15th, at 3pm. This walk took place in multiple parts, the first part being the usual route from Olympic Plaza to Thomkins Park, then walking down 17th ave sw to the Victoria Park c-train station and hopping on a train to Chinook. From Chinook LRT to the Chinook Mall food court. Even though the zombie walk officially ended at the food court, there was also an after party at the Warehouse nightclub. 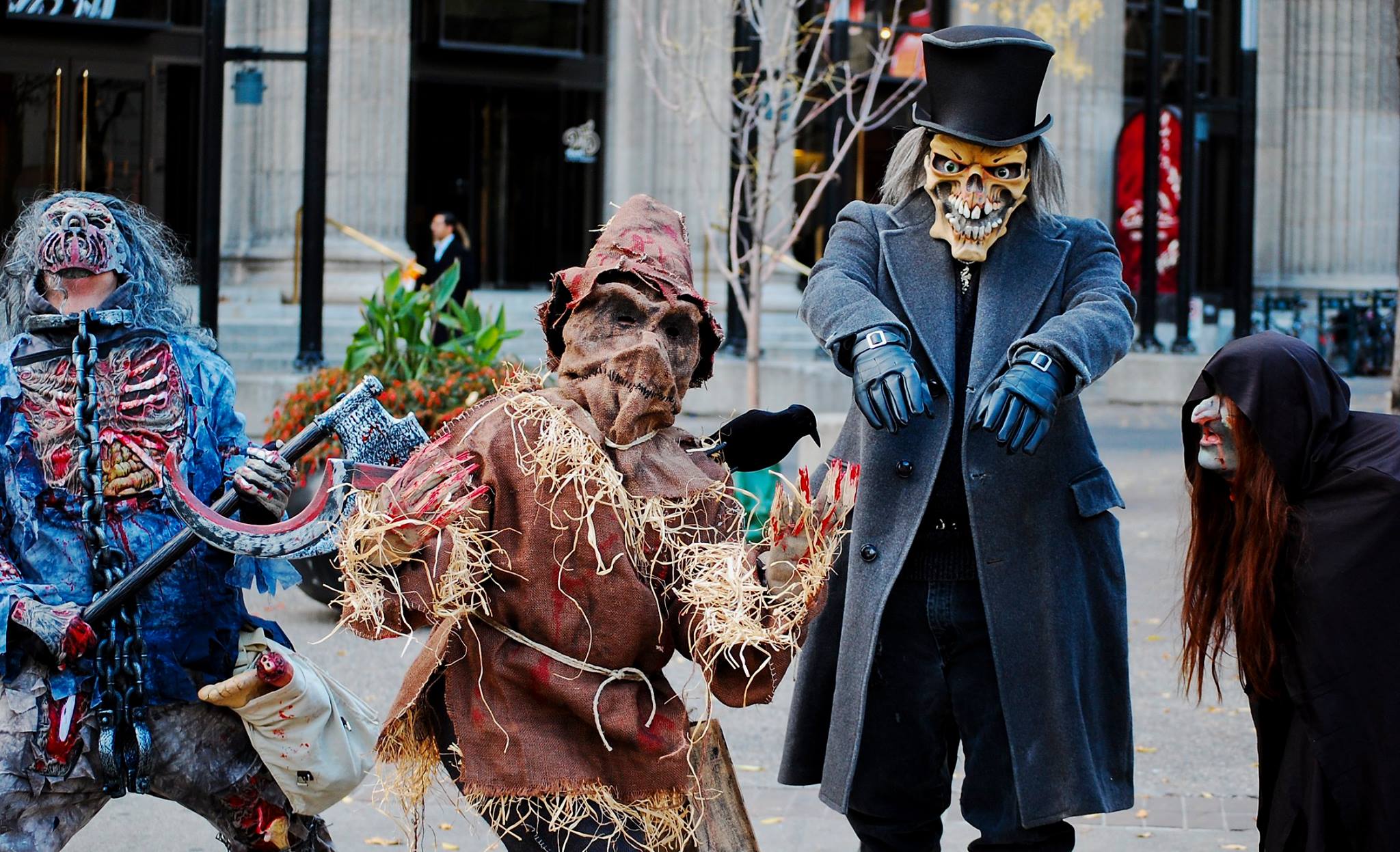 At this point in time CalgaryZombie.com was created to help share information and keep all of the zombies up to date. Facebook hadn’t taken off until 2006-2007, so things were a little more difficult to coordinate online at the time. Before the dawn of modern social media, a lot of people used a website called Livejournal to keep each other updated, and share posts in communities. A Livejournal account was created calgaryzombie.livejournal.com to do this, but it also included a detailed history of how the Calgary Zombie Walk began.

So what’s the story?

Calgary Zombie rose from the dead in the late summer/early fall of 2005 to bring the First Annual Calgary Zombie Walk to the streets of Cowtown. The whole thing started when local undead enthusiast and CJSW radio host

chris_parasyte heard about a similar event in Vancouver, which just happened to be taking place while he was visiting Van City.

Unfortunately, he missed the Vancouver event. Okay; he slept through it, truth be told. It’s a short and somewhat embarassing story, with the important point being that Chris decided to organize a Zombie Walk for Calgary when he returned.

Word spread like a virus online… within days of posting the information in only three places – parasyte’s own LiveJournal, the

spookycalgary community and on Darkalberta.com – the information had spread to numerous blogs and message boards with an overwhelmingly positive response. A number of local media outlets picked up the story, including FFWD Weekly, Beatroute Magazine, The Gauntlet, CJSW FM, The Reflector… even CBC Radio and The Calgary Sun gave the event coverage! With the invaluable help of Amber (aka

theyknow) the Calgary Zombie website was launched just days before the event.

The First Annual Calgary Zombie Walk was a huge success, with around 300 of Calgary’s finest undead enthusiasts rising to the occaision! Everyone’s make-up and costumes were awesome, and everyone in downtown Calgary – dead and alive – had a great afternoon. A bit of a run-in with mall security at Chinook Centre, where the undead had gathered to hit the food court for dinner, called an end to the event, and the Warehouse Nightclub hosted a great afterparty… for all the zombies over 18, anyway.

calgaryzombie blog exists to host photos from Calgary Zombie events, as well as to keep local zombie fans up to date on the latest local undead happenings, and is maintained by

chris_parasyte (feel free to check out his personal blog if you want to know more about the braaaiiiiinnnnsss behind all this). Plans are underway to make the 2006 Calgary Zombie Walk even better than the first event, and we’re working on a few other things before then as well, so keep your eyes here for news as things shape up. Feel free to add

calgaryzombie to your Friends list… we’ll add you back in turn, and you can check out our Friends page, The Walking Dead, to get to know some other local undead enthusiasts!

Chris organized and ran the Calgary Zombie Walk until the 2006 walk had been completed. In 2007 there was an issue and he wasn’t able to secure the needed permits for the walk, so he ended up putting out the word that the event was cancelled, however, nobody is the boss of zombies and they all showed up anyway. After that Zowie Jones took over running it, then a few others. It’s held around the same time every year.

Zombie walks have been happening more and more throughout the world, with some having to be shut down, succumbing to their own popularity. For example in 2013 the Winnipeg Zombie Walk was cancelled due to the costs of running the event, as well as safety concerns. The 2015 Toronto Zombie Walk had to ‘officially’ cancel their event due to failing to secure funding from government agencies as it had done in the past, such as tourism companies (they had one anyway). The Toronto Zombie Walk tends to attract over 10,000 zombies, so it can get quite expensive to officially run.

There is a group photo pool on flickr where people have posted photos from all of the zombie walks.

Below I’ve included a number of photo galleries, videos as well as flickr searches. Several people post zombie pictures on flickr, so if you took part in one, have a look for your photos!

All of our own photos are included in the tabs below, or click here to visit our Facebook photo albums. We’ve taken tons of photos from lots of various events around Calgary.

The 2007 Calgary Zombie Walk was technically cancelled, however the zombies still showed up and did their thing because zombies are zombies.

Source: Bad news this week… I’ll be announcing later tonight on Facebook that this year’s Zombie Walk is officially cancelled. It’s sort of a long story, but it boils down to two different departments at The City not having their stories straight, so the required permits and such won’t be ready until the first week of December at the earliest.

So yeah. The 2007 Zombie Walk is officially cancelled by the organizers of the event. Of course, if people still want to dress up as zombies on Saturday, I’m not going to tell them not to… 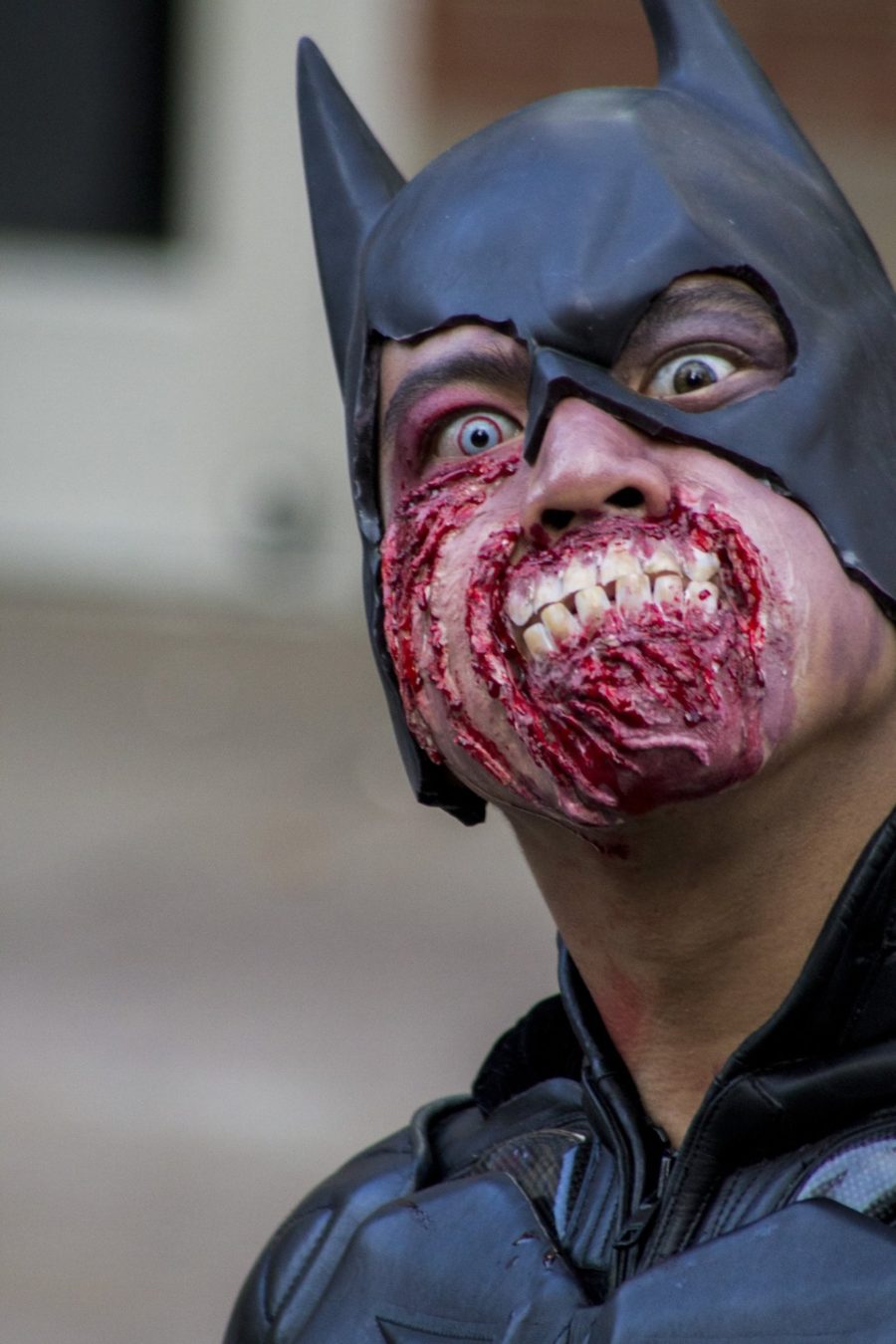