Things to check out at the Calgary Entertainment & Comic Expo (2017)

The 2017 Calgary Expo is Almost Here

Every year towards the end of April, Calgary transforms from a regular boring ol’ city, to a hub of TV, movie, gaming and comic geekdom. The Calgary Entertainment & Comic Expo sets up shop in the BMO centre for 4 full days of pop culture celebration that anyone of any age can sink their teeth into. Even though it’s a ‘comic convention’ in part, it’s not just for comic nerds! The whole family can get in on things. There’s celebrity discussion panels, costume contests, art & artwork, video game competitions, photo ops, anime, cosplay, all sorts of jewelry and hand made items for sale, and even a parade through downtown. If you are into comic books, you can buy/trade/collect, and even meet some of your favourite artists. It’s one of our the most anticipated events Calgary has to offer, and it’s always a pleasure to rub shoulders with random Ninja Turtles and rad He-mans.

The Calgary Expo started way back when in the year 2005, when a local group of geeks decided Calgary needed a comic expo. In the first year, with a few artists and some rinky dink merch tables, they managed to draw a humble crowd of approximately 3000 people. Since then, records have been broken and more than 100,000 people have attended from all over the world. They’ve really perfected the art of putting on a con, and I’m so happy we have them.

With that said, as we’re regular Calgary Expo attendees, here is a list of things to check out for 2017’s Calgary Entertainment & Comic Expo.

The Parade of Wonders 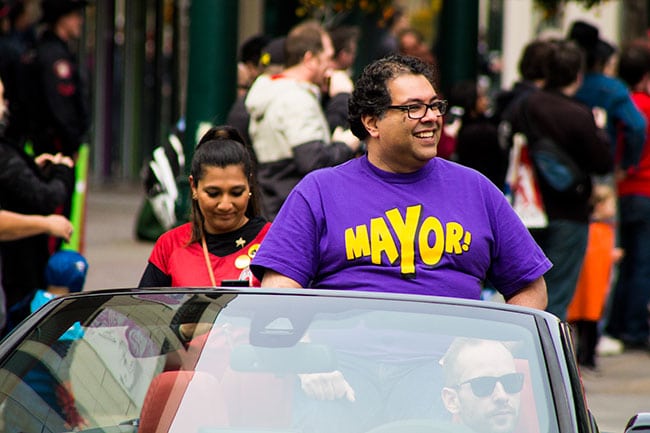 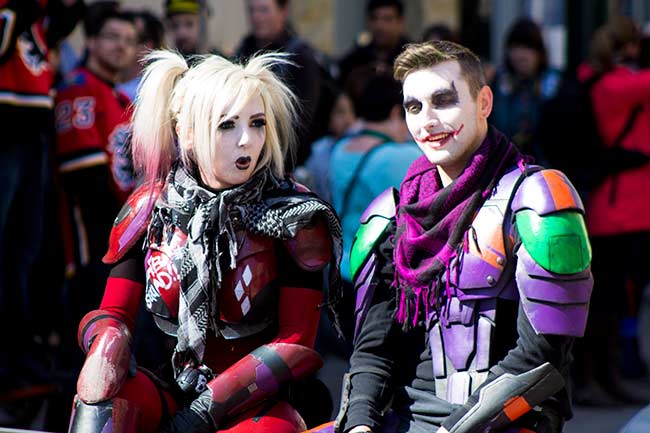 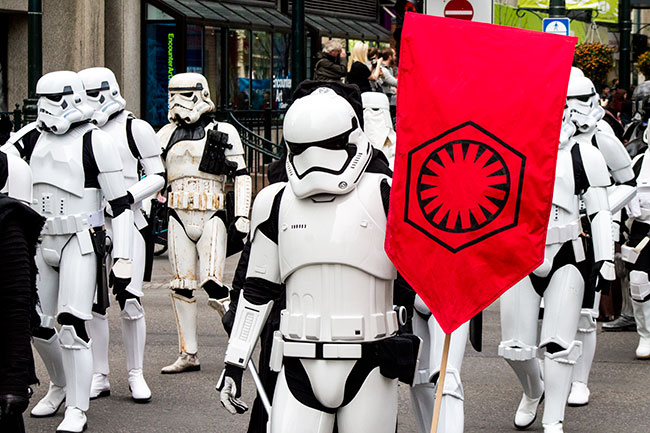 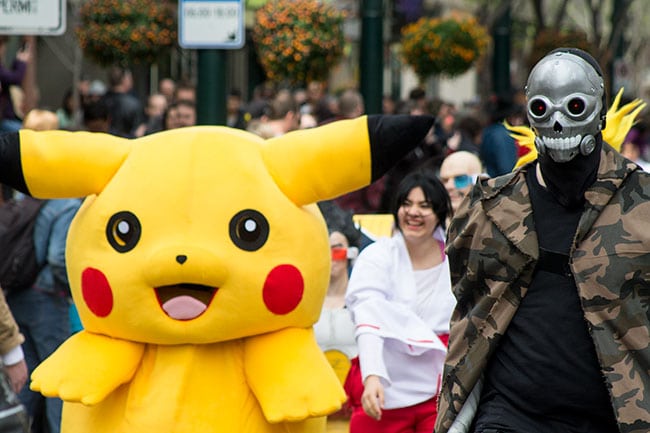 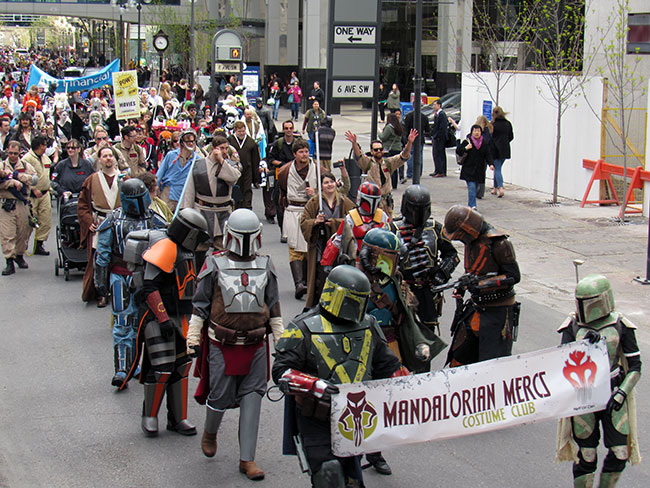 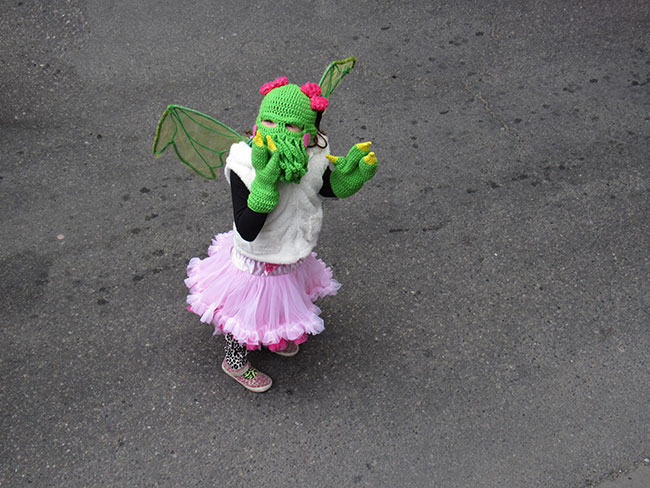 The Parade of Wonders is quite the spectacle. A couple thousand people all dressed up as their favourite characters march through the downtown core, celebrating and shouting out their awesomeness to the delight of unsuspecting tourists and downtown inhabitants. In addition to the array of cool costumes, Calgary Mayor Naheed Nenshi usually partakes, as well as various celebrities that will be attending the Calgary Expo. It’s really something to see. Elmo hanging out with Dragon Ball characters, kids dressed up as characters whom they have no clue what they are, anime heroes, video game bosses, maybe even tunnel snakes. It’s free for people to join up, and free to watch of course. Highly highly recommend making the time to enjoy the POW parade if you’re able to. If you’re a photogtapher, it’s really fun to shoot!

On Friday April 28th this year the parade will be starting at 8th street and 8th avenue SW, next to Century Gardens park, and, Crack Macs! The parade begins at 10:30 AM, so be sure to head down earlier if you’re attending, or watching. From 8th and 8th the parade will make it’s way down to Olympic Plaza for an 11:30 AM official Calgary Expo kick off celebration. 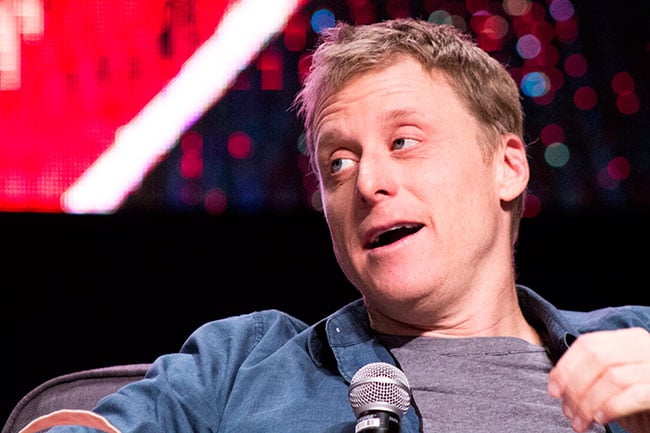 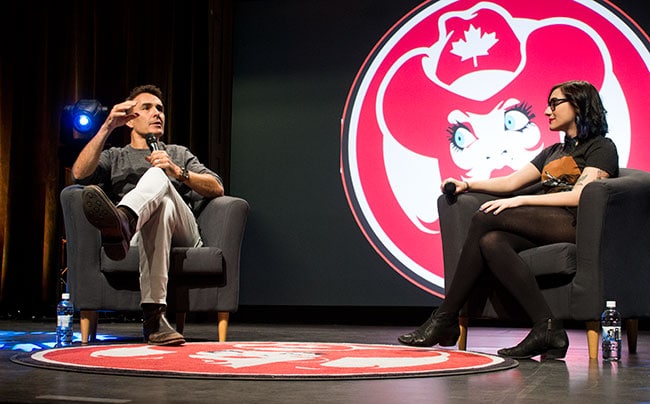 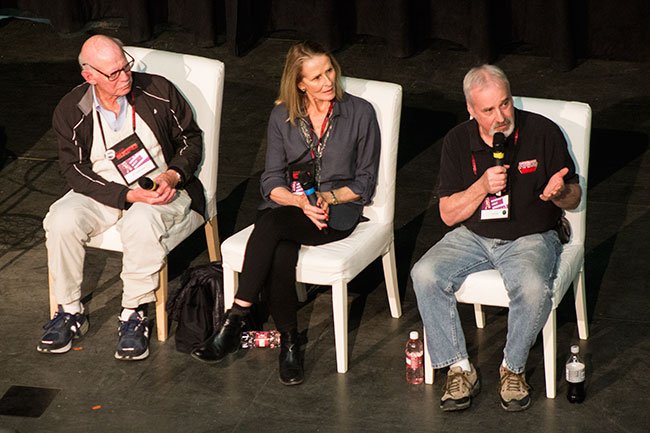 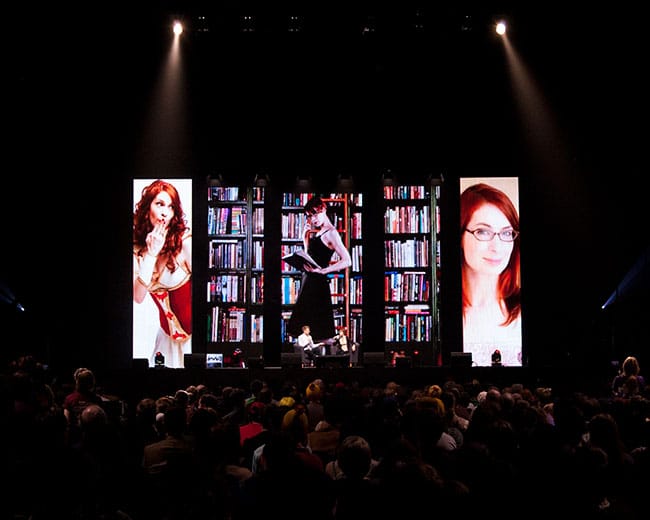 The panels are probably my favourite part of the Calgary Expo. They come in two flavours, big and small. The bigger ones are held in the Corral, in front of a large audience. The smaller ones are usually held either in the Boyce theatre, in tents outside, or some other kind of atrium. They’re both worth attending, depending on who you want to see. The larger panels can be more entertaining and funny, whereas the smaller ones are absolutely more intimate and interactive. It’s especially nice to be able to ask questions face to face, or hear the celebrity speak at normal volume, and you don’t have to wait in line at a microphone. Panels are included with the price of admission too! You will need to line up for the smaller ones, whereas in the Corral everyone just slowly shuffles in to find seats.

Note: the best seats in the house (right up front) are usually reserved for VIP Calgary Expo pass holders.

The Merchandise and Collectibles 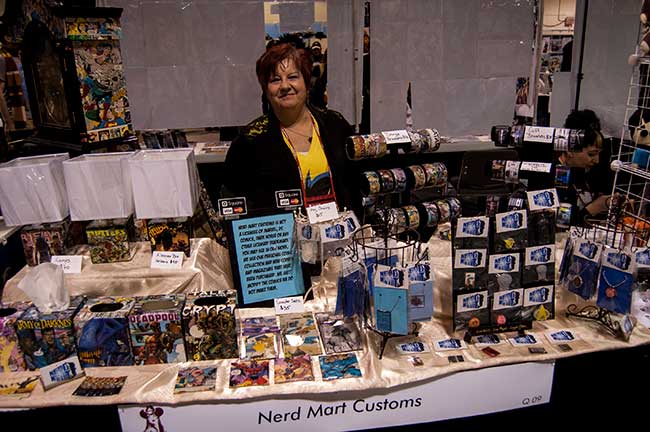 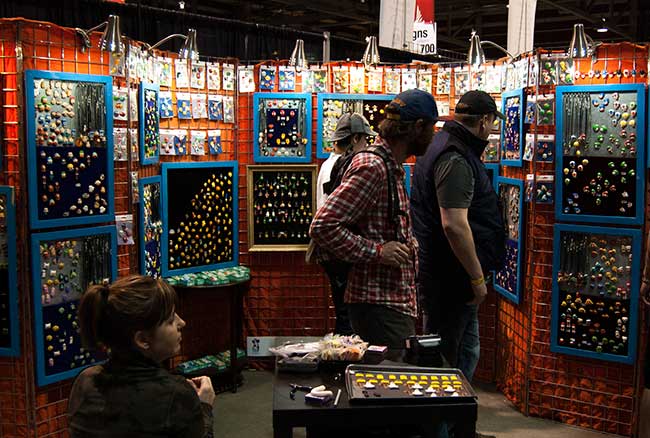 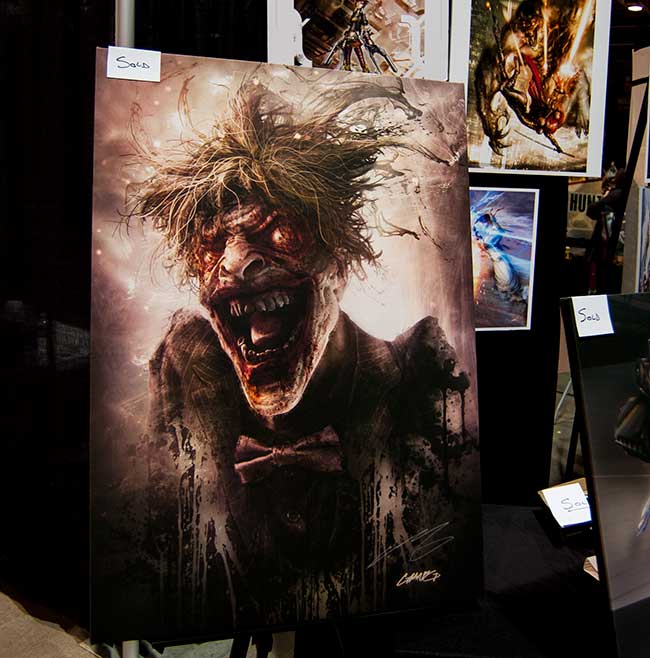 The halls of the BMO centre are home to numerous vendor booths selling all sorts of memorabilia and merchandise, and even if you don’t intend on buying anything, it can be really fun to browse and see. There’s many different homemade trinkets, clothing pieces like t-shirts, bathrobes, hoodies, socks, jackets and costumes, video games, comic books, food and snacks, glassware, flutes, posters etc. You’ll even find artists drawing pictures and creating content while they’re on the floor. It was a pleasure seeing the Cyanide & Happiness guys do their thing right before my eyes.  In addition, one of the recent additions that can be fun to buy are the mystery boxes. It’s a bit of  a gamble, but you pay X amount to buy a box with something random inside it. It can be worth hundreds of dollars, or be something you really wouldn’t buy normally. Risk vs reward as they say.

The Calgary Expo wouldn’t be complete without spending a little cash on something to take home, so make sure to bring at least a $20 with you. Something we do every year is buy a giant stack of female comic books for the kid. Wonder woman is a bit hit with her.

Taking in the Cosplay 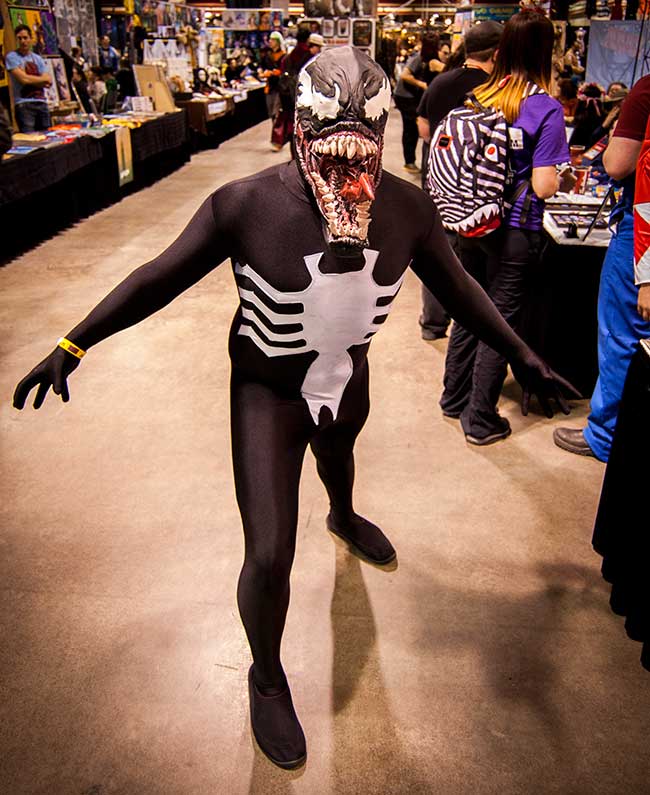 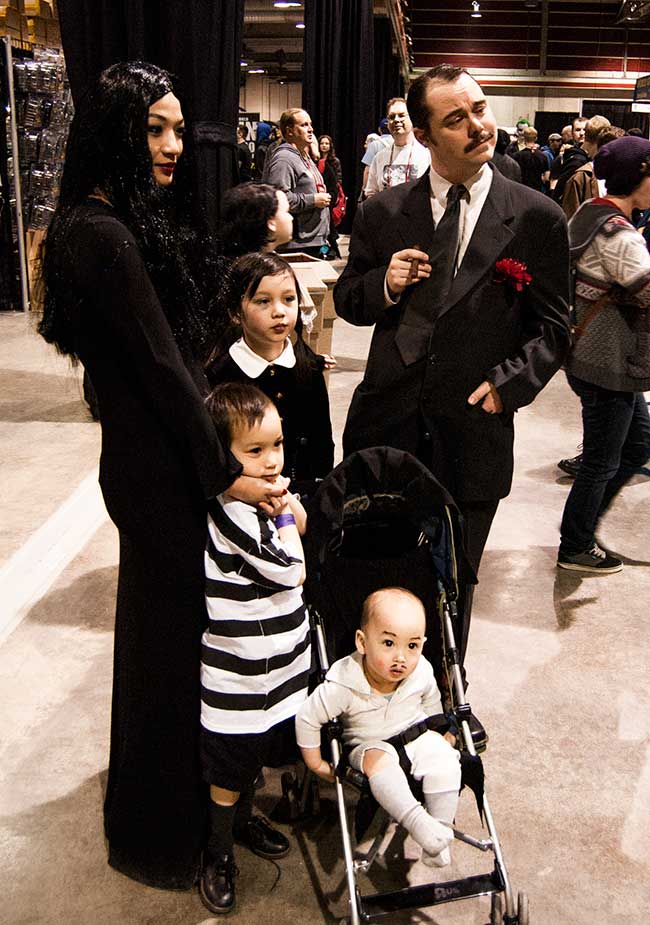 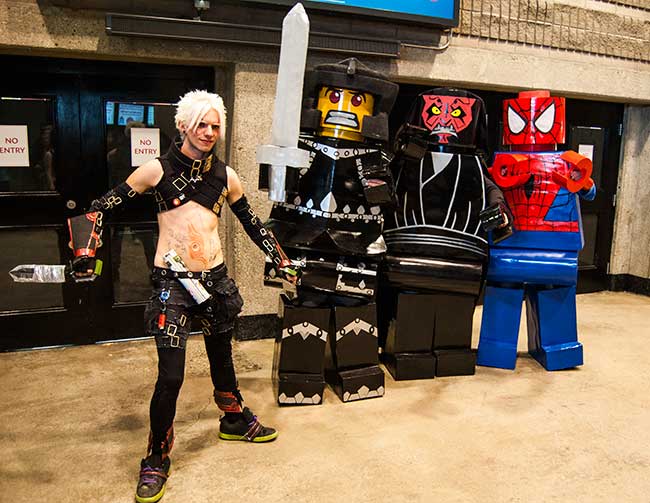 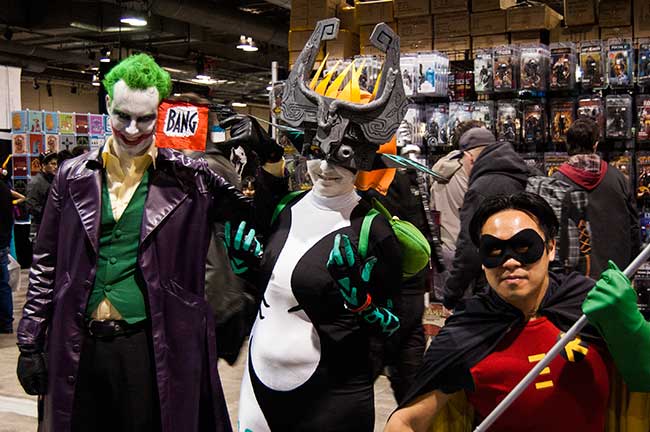 If you bring a camera down to the Calgary Expo, one of the really fun things to do is take pictures of all the amazing costumes. People spend all year perfecting their outfits, sewing and patching, dying and creating and they really want to show them off – and some of them are quite spectacular. There’s characters from every universe and canon you can think of, new and old, extremely popular or totally unknown. A word of advice though, if you’re going to take photos, be polite and ask to do it. It not only shows the people respect, you’ll get better photos out of it. A quick “hey can I take your picture?” or even just holding up your camera and giving them a nod is all you need. They’ll stop what they’re doing and give you their best pose. Win win. As well, if you’re taking pictures of all the cosplayers, it doesn’t hurt to tell them where they can find the photos later on! If you have a blog or something, they’ll really appreciate it. 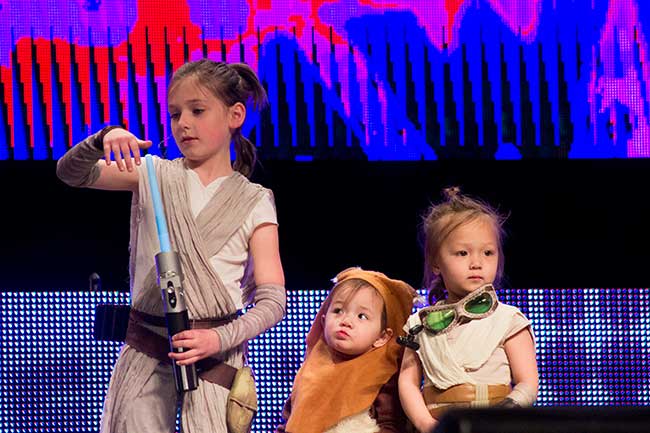 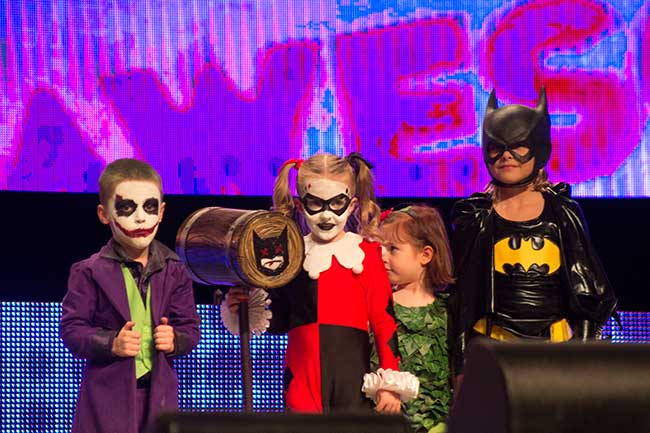 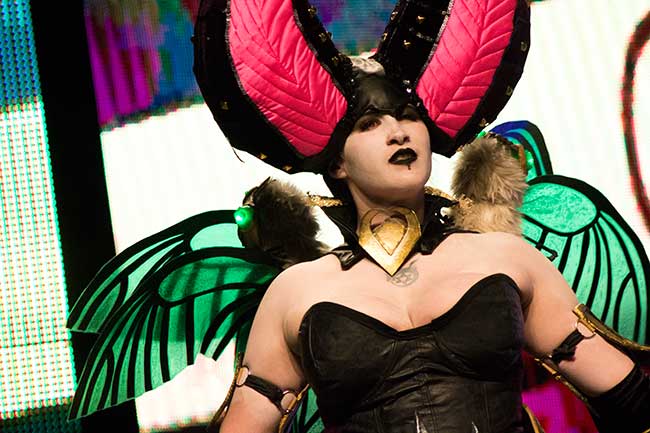 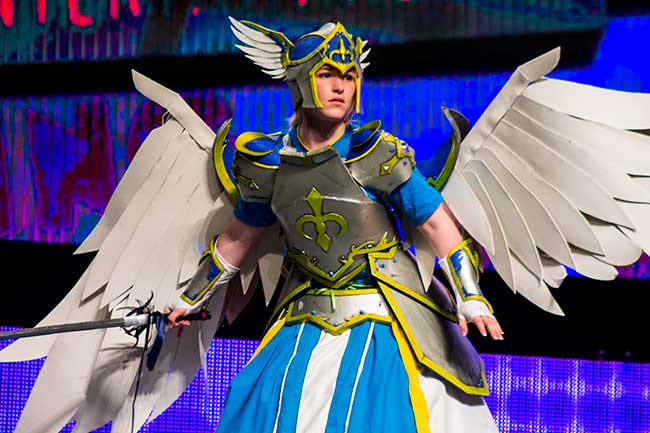 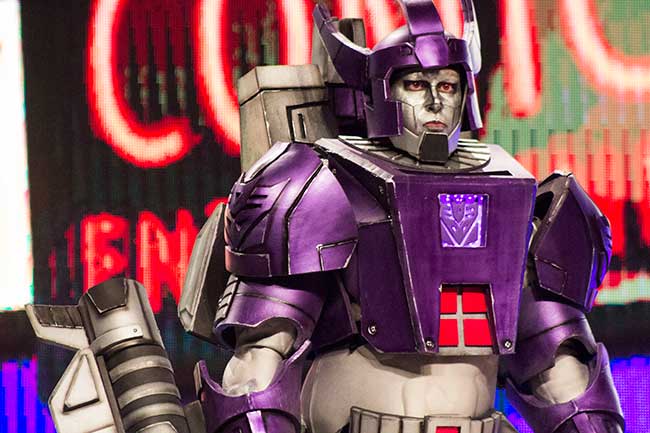 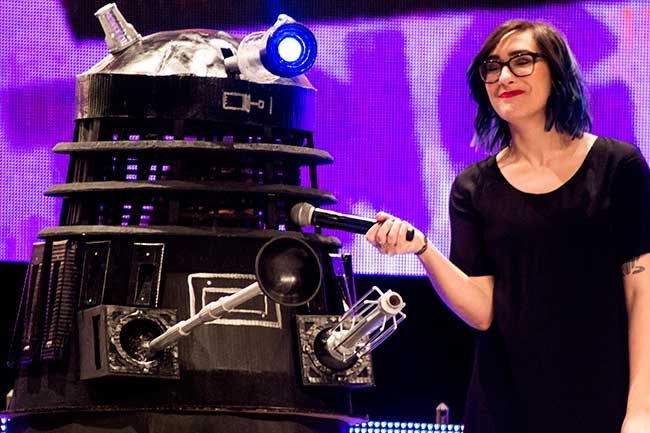 The costume contest is perhaps the most adorable thing on the planet. There’s multiple categories, one for kids, then juniors, then adults and then the like, super good costume building adults. I very much recommend catching this event. For photographers, you get some really amazing pictures. For fans of cool costumes, you’re in heaven. For those of you who spent all day walking around and your feet hurt, you get to sit down! Plus, it’s really entertaining. The poses, the skits, the action scenes, the mishaps, and I’ve even seen a marriage proposal.

A Guide to Mastodon. A new decentralized Twitter clone.