Archery Games recently opened up shop in Calgary and it’s something you need to check out. It’s basically dodge ball, but with foam padded arrows, a wrist guard, and a helmet. On top of being extremely fun, it’s also an exceptional workout. The basic rules are simple and they have a variety of game play modes to mix things up and keep it interesting. Frankly, shooting people with padded arrows is really fun by itself, however, the other game modes are fun too. See below for more information.

Because Archery Games is so much fun, you won’t even notice how much exercise you’re getting. Your mask will most certainly be dripping with sweat by the time you’re finished (don’t worry, they clean them with a 90% alcohol solution) and if you’re anything like me, you’ll be going home sore as hell. Getting hit with the arrows doesn’t hurt all that much, depending where you take it.

Calgary Archery Games: How It Works

There is a warm-up area that you can use to get familiar with the bows and how to shoot things. As well, there are tables with capacity for 30 people, and yes you can bring food. 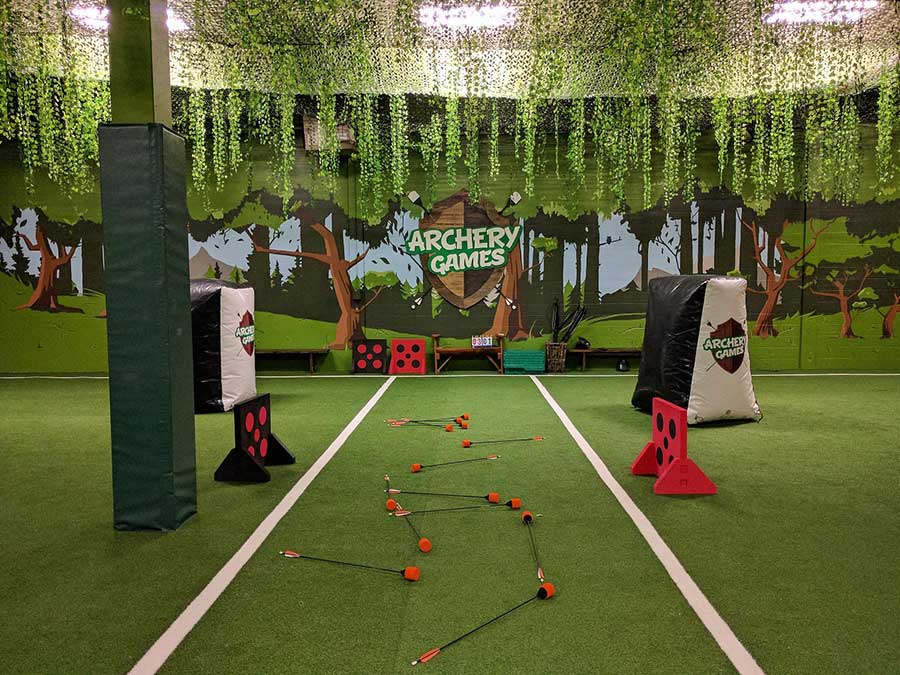 I recommend wearing loose fitting clothing, such as jean shorts, a t-shirt and runners. You’ll be running a lot. The bows are really easy to get the hang of and getting the arrows to go where you want them to takes no time at all. You don’t have to have any archery experience. They have adult and youth sized plastic bows, which are light and pretty fool proof.

Fast paced music plays throughout the arena as you play. Nine Inch Nails, The Offspring, Creed (wtf?) were some that I noticed. Good stuff while doing cardio.

One of the best parts? The more you play, the better you get at it. If you’re competitive, you’re going to enjoy it so much that you won’t want to leave.

When the round begins, everyone stands back on their respective team’s side, touching the fence. The whistle blows, you run to the middle and grab an arrow. From there you can stand and shoot someone, or run back for cover and figure out a target. If you get hit with an arrow, you’re out. You can’t shoot someone in the safe zone, which is between the white lines. If someone does get hit in the safe zone, it doesn’t count. Even though they’ve taken great care with setting up and running a safe environment, you need to follow the rules to ensure nobody gets hurt and everyone plays fairly.

From there, things change up slightly.

(I don’t suggest trying to record a cell phone video while playing.. that could end badly)

Some game modes allow you to revive team mates. Archery Games really took their time in crafting these to offer some variety. My personal favourite mode was Dog Eat Dog. Basically it’s a free for all, and you can cross the white line to ‘join’ the other side and fire arrows back at your team mates. Eventually it’ll get down to 2 remaining players, who have a duel to see who is wins. Very fun!

Does It Hurt Getting Hit?

Getting hit? Nah, not really. I took an arrow directly to the ear once and it surprised me more than anything. If you see them coming, you can duck dodge dive to avoid it, but if you don’t see it coming… wham! My ear was a bit red and warm for a few minutes, but with all the adrenaline flowing, you’ll barely even notice. The body shots I took didn’t feel like anything.

I managed to dish out the hits way more than I took them, hitting some people square in the face, and they were fine.

The only injury on anyone was from when one of the guys tried to jump out of the way and skinned his elbow on the floor. Archery Games has outfitted the arena with all kinds of padding and protections for such situation, but it’s pretty difficult to protect yourself against the ever painful floors out there. You also wear wrist guards.

I suppose if you run face first into one of the padded support beams, that would really hurt, even with the protective gear. Don’t do that.

They offer corporate team building events, birthday parties, and will be hosting weekly league nights, likely starting some time in May. They can accommodate larger groups or private bookings as well. In addition to booking the Archery Games arena, they have a locked room! We took a quick peek inside, it was really cool. I’ve never actually gone through a locked room before so I’m not sure how it compares. It’s called Hanger 403, and it just opened as well. Go here for info: https://www.thelockedroom.ca. They run a number of other locked rooms around Calgary.

Had so much damn fun! Check it out, I posted a longer video on Facebook of what it’s like.

Things to check out at the Calgary Entertainment & Comic Expo (2017)

1 thought on “Calgary Archery Games – Shoot Your Friends With Arrows!”