You’ve probably heard of Head-smashed-in Buffalo Jump, but have you ever been to visit in person? It’s quite the experience. They have an interpretative centre and museum packed full of Blackfoot culture and artifacts built right into the hillside, but the real treat in my opinion is standing on top of the very same ridge that was once used for running herds of Buffalo to their doom, much to the delight of Alberta’s indigenous people for well over 5000 years! Using the natural lay of the land to their advantage to catch and kill Buffalo was genius. Getting to see the expansive prairies from the location where so much history has taken place is pretty astounding. We’re so lucky to live so close to it! In addition to being a provincial and national historical site, did you know Head-smashed-in Buffalo Jump is an Unesco world heritage site? Sure is!

Head-smashed in Buffalo Jump is located 15 minutes west of Fort Macleod. It’ll take you about 2 hours to get there, leaving from Calgary.

Head-Smashed-In Buffalo Jump Interpretive Centre is a UNESCO-designated World Heritage Site that preserves and interprets over 6,000 years of Plains Buffalo culture. Through vast landscapes, exhibits, and diverse programming, learn about the cultural significance of this cliff to the Plains People.

The buffalo jump was used for 5,500 years by the indigenous peoples of the plains to kill buffalo by driving them off the 11 metre (36 foot) high cliff. Before the late introduction of horses, the Blackfoot drove the buffalo from a grazing area in the Porcupine Hills about 3 kilometres (1.9 mi) west of the site to the “drive lanes”, lined by hundreds of cairns, by dressing up as coyotes and wolves. These specialized “buffalo runners” were young men trained in animal behavior to guide the buffalo into the drive lanes. Then, at full gallop, the buffalo would fall from the weight of the herd pressing behind them, breaking their legs and rendering them immobile. The cliff itself is about 300 metres (1000 feet) long, and at its highest point drops 10 metres (33 ft) into the valley below. The site was in use at least 6,000 years ago, and the bone deposits are 12 metres (39 feet) deep. After falling off the cliff, the injured buffalo were finished off by other Blackfoot warriors at the cliff base armed with spears and clubs. The carcasses were then processed at a nearby camp. The camp at the foot of the cliffs provided the people with everything they needed to process a buffalo carcass, including fresh water. The buffalo carcass was used for a variety of purposes, from tools made from the bone, to the hide used to make dwellings and clothing. The importance of the site goes beyond just providing food and supplies. After a successful hunt, the wealth of food allowed the people to enjoy leisure time and pursue artistic and spiritual interests. This increased the cultural complexity of the society.

How Head-smashed-in Buffalo Jump Got Its Name

Contrary to what you might be thinking, the name didn’t come from the Buffalo getting their heads smashed in, although that certainly did happen too. Legend has it that during one of the runs of the bison, a young brave wanted to get a better view of the action, so he stood under the cliff waiting for the stampede to come pouring over like a waterfall. As you’d expect, he ended up getting smooshed and died. When they found him, his head was smashed in, so now it’s called Head-smashed-in Buffalo Jump. That’s the legend anyway. Source (PDF). 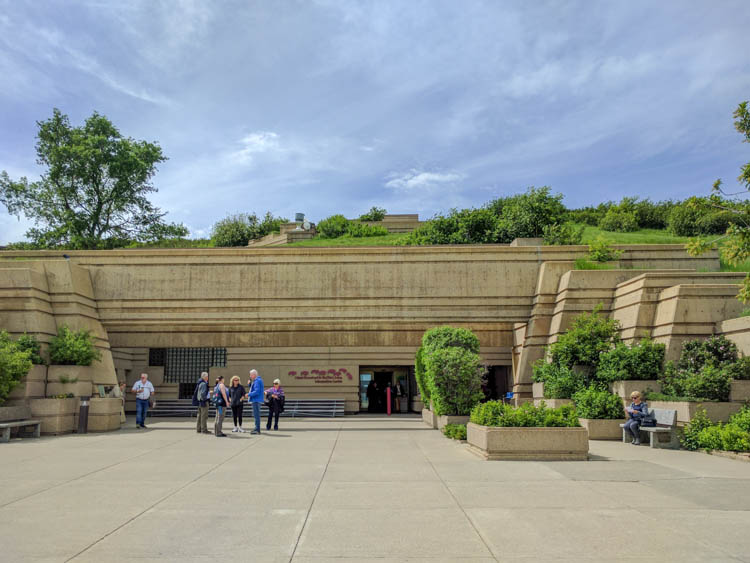 The unassuming entrance to the Head-smashed-in museum. It’s built right into the hill side and looks almost like a temple. 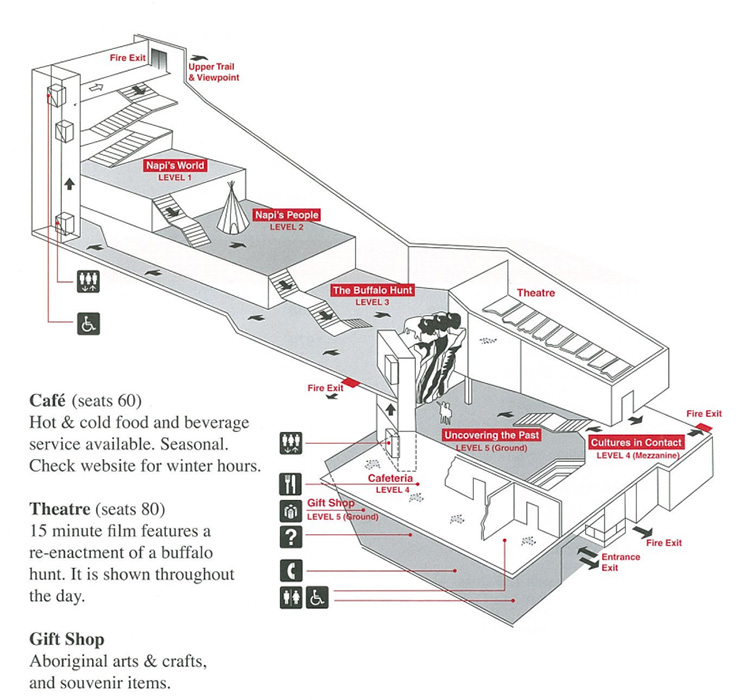 Inside, you will discover 5 levels of exhibits that explore: 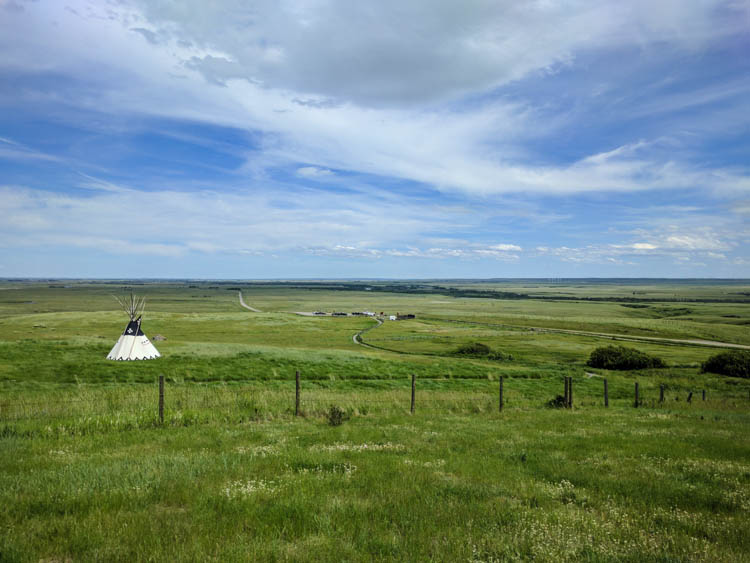 Looking outward across the prairies. Once you’re out there you can really get a feel for how expansive Alberta is. 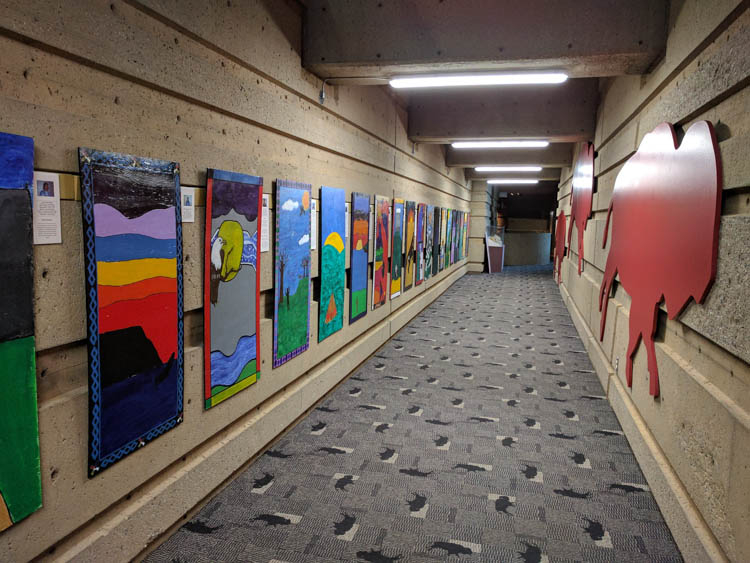 The interpretive centre has a lot of artwork. 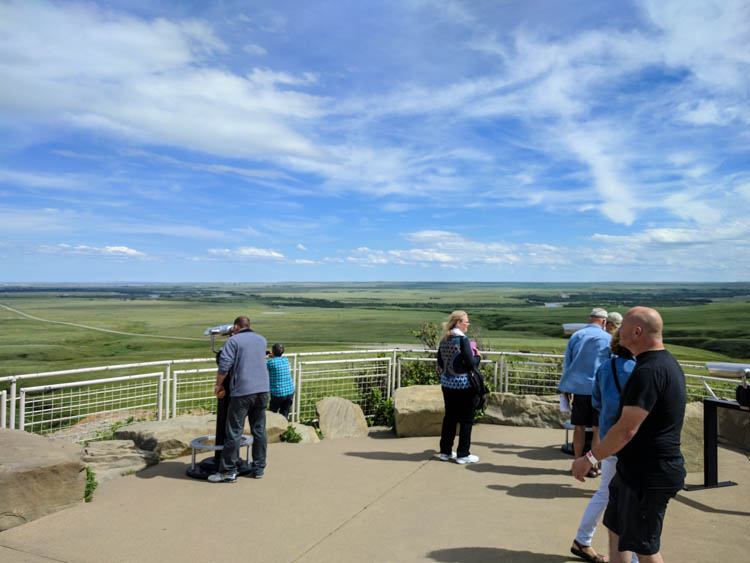 There’s an observation deck at the top, on the ridge. This is actually where you’re supposed to begin the tour, making your way down through the museums different levels, because you know, gravity. 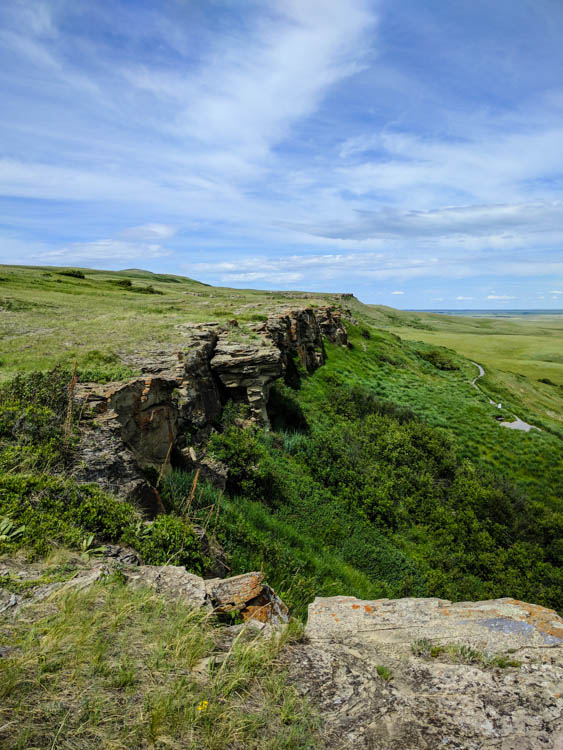 Bison going over the edge would be killed or severely hurt by their own sheer weight + hitting the ground. Groups of people would also be waiting at the bottom with weapons to finish them off if gravity didn’t. 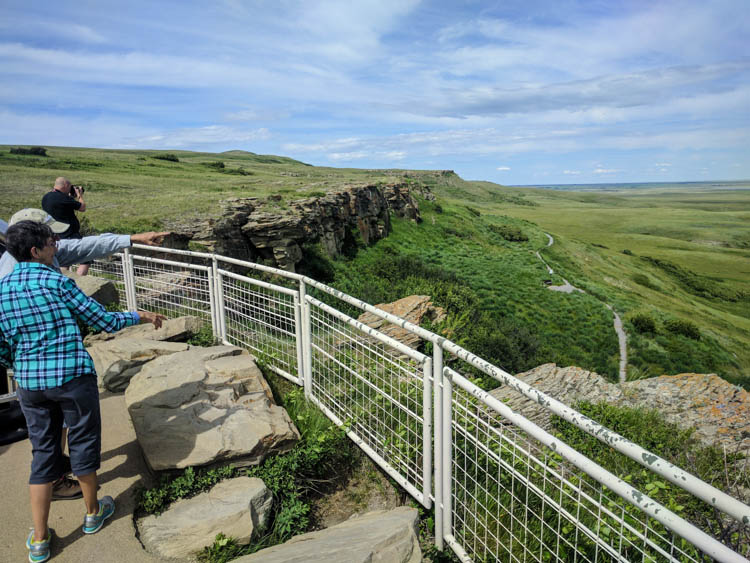 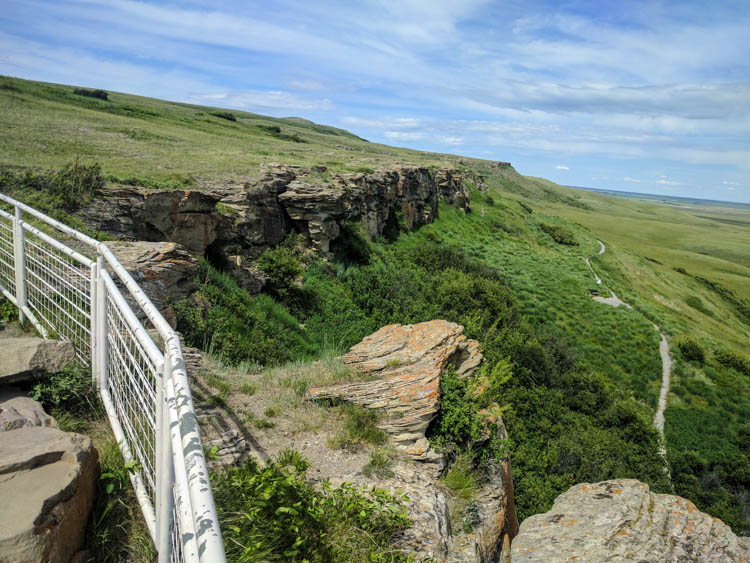 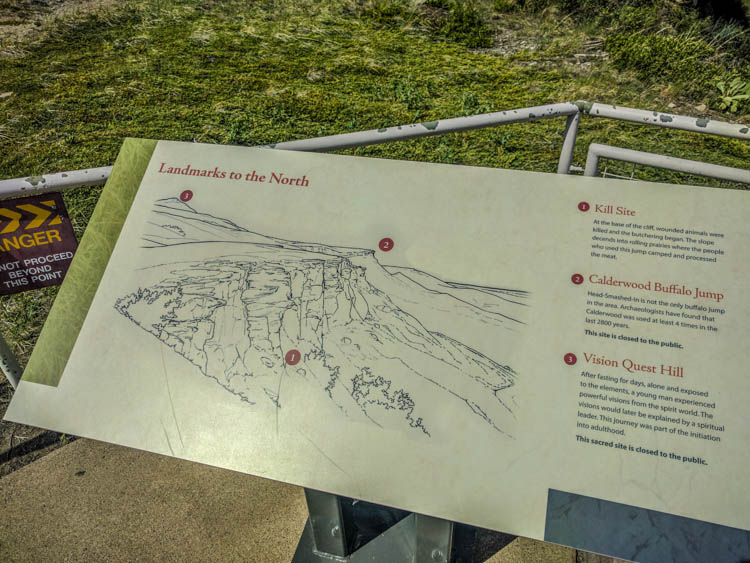 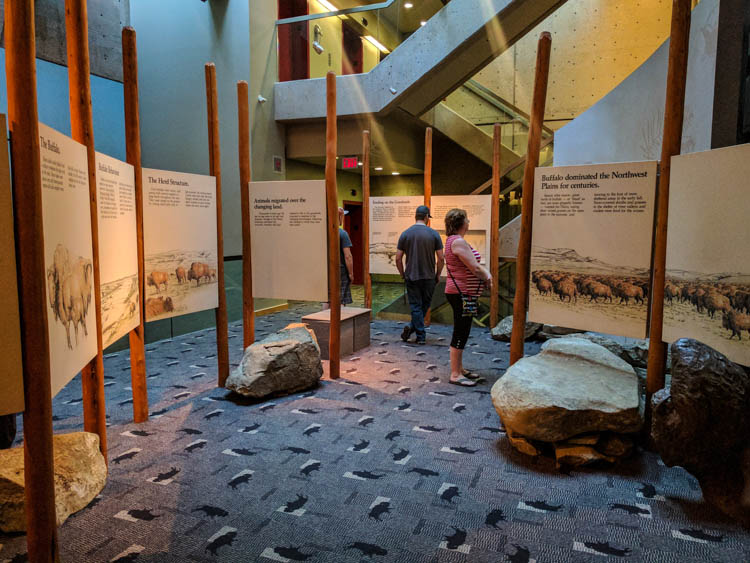 Plan to spend at least an hour going through the floors, viewing all of the artifacts, plus lots to read. 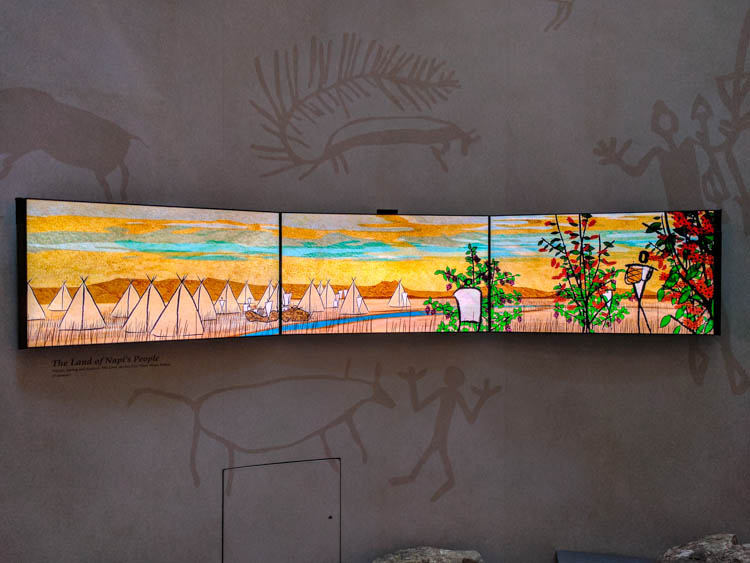 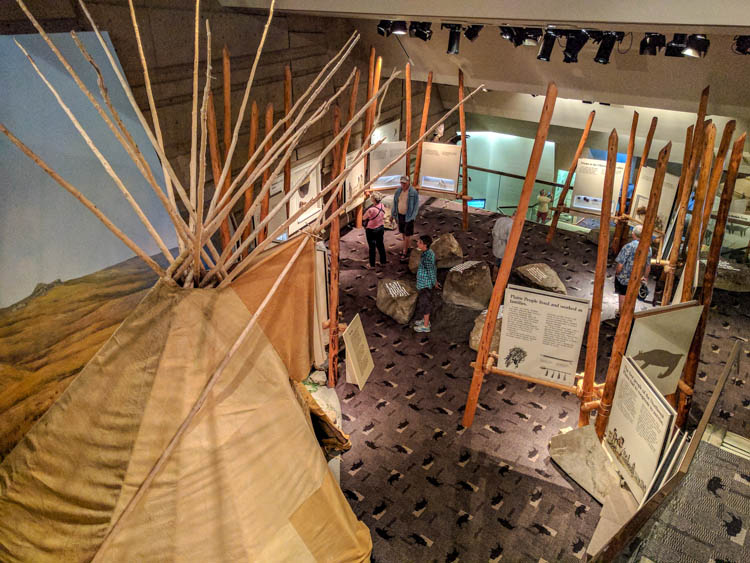 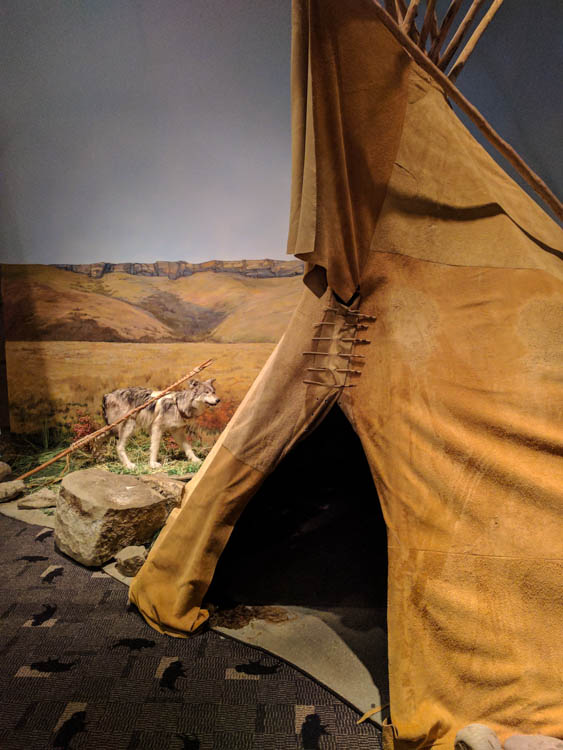 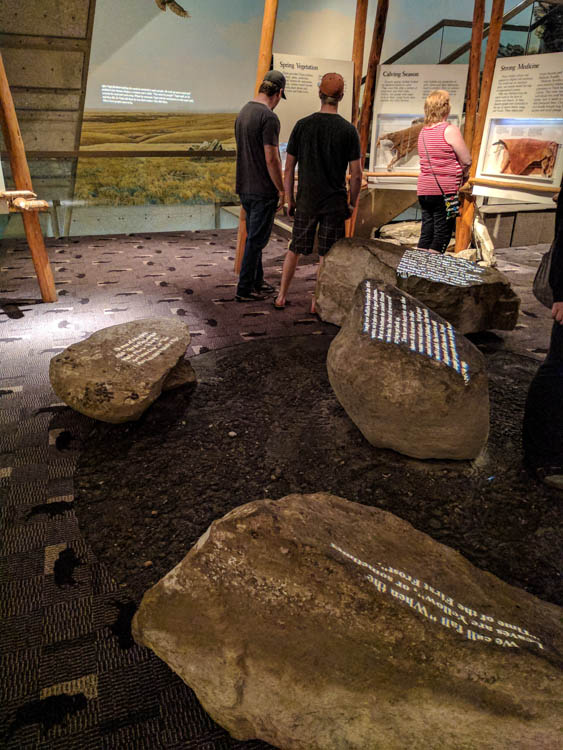 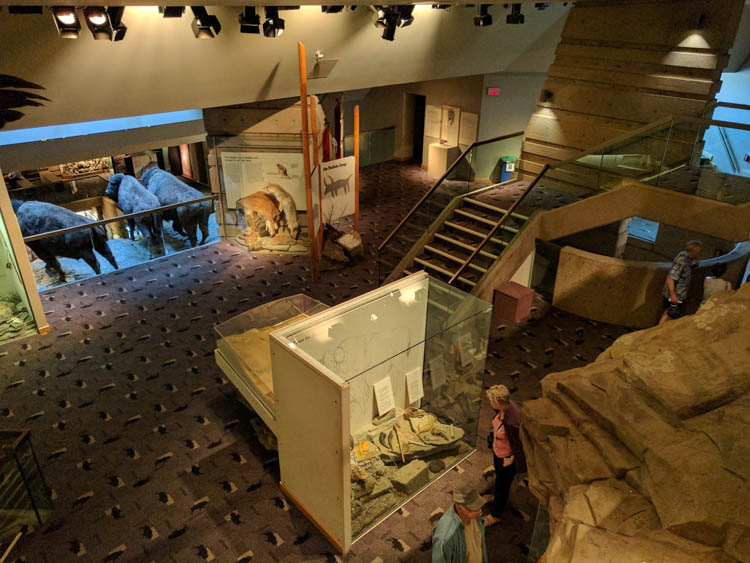 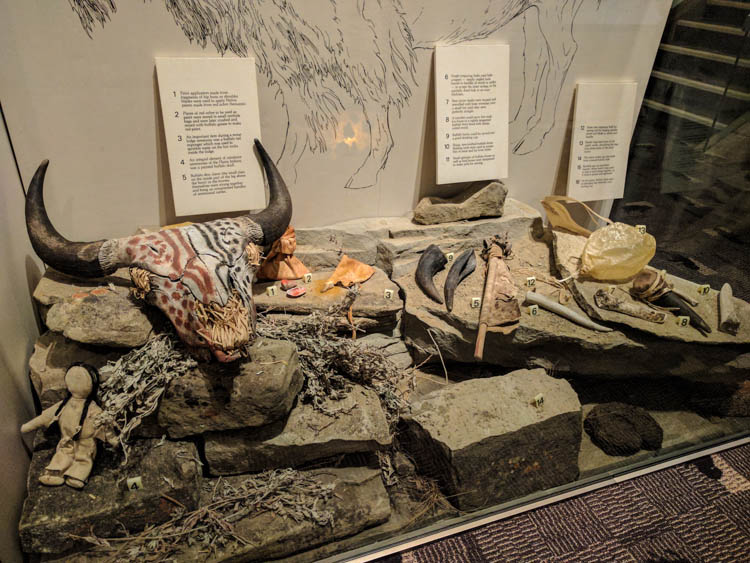 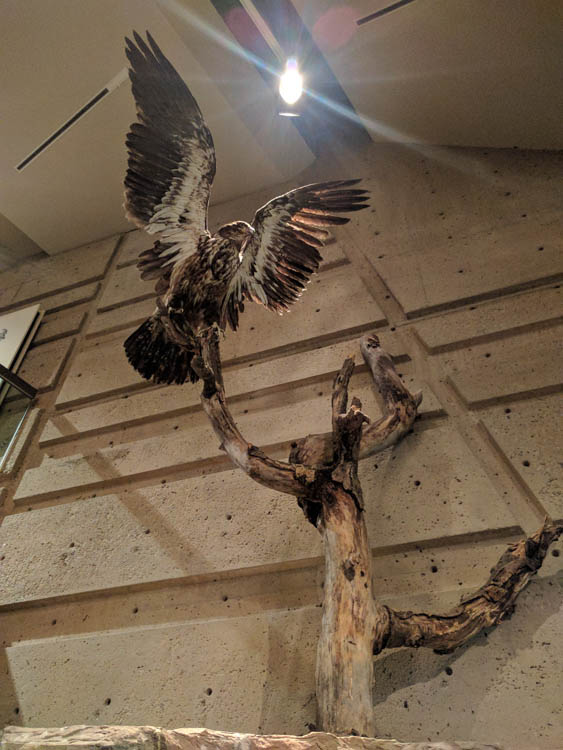 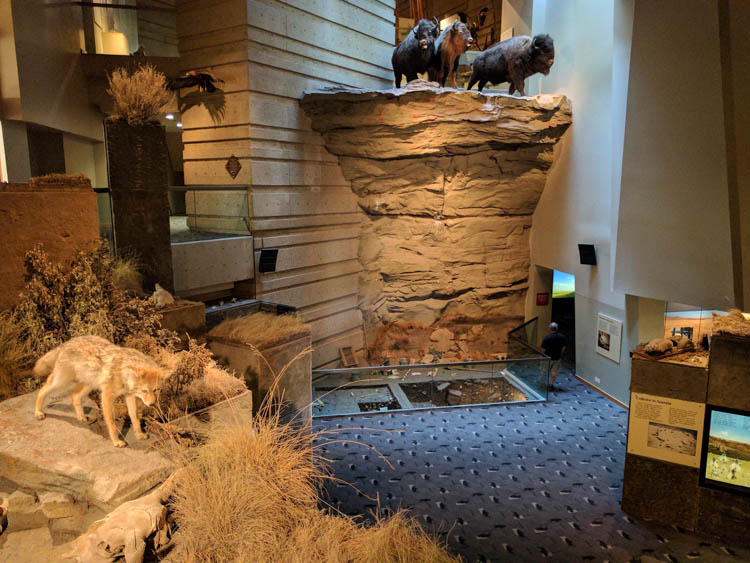 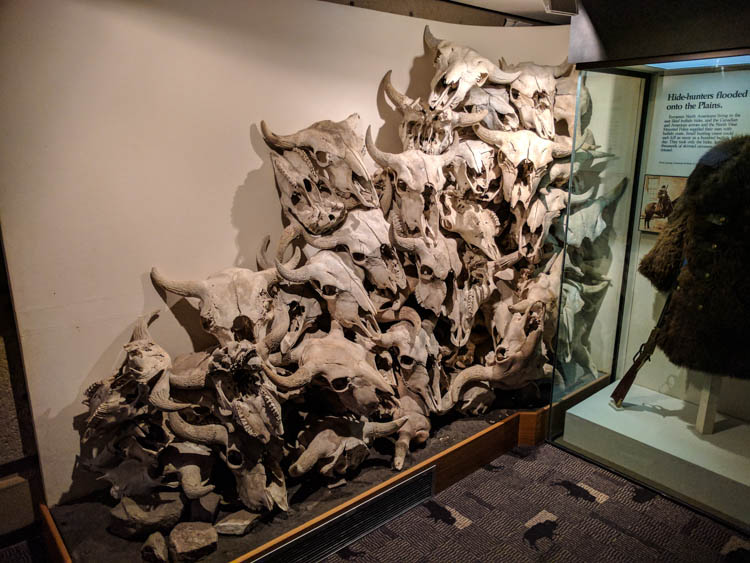 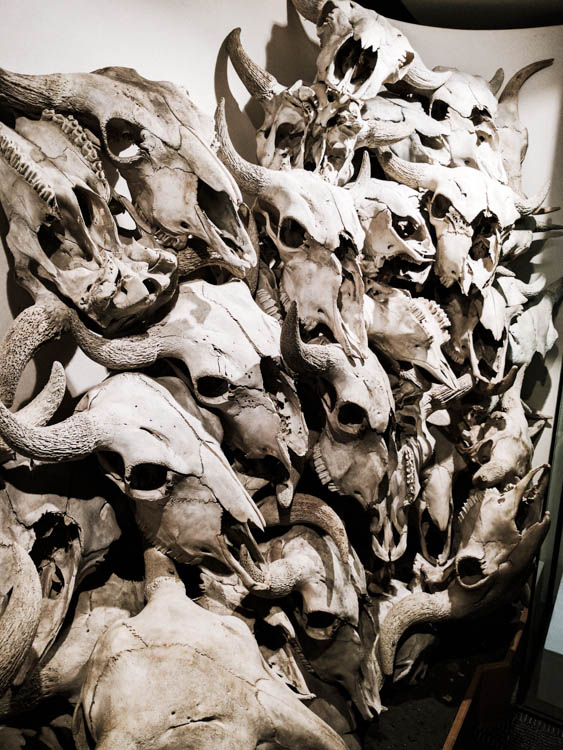 Skulls are cool, there I said it. 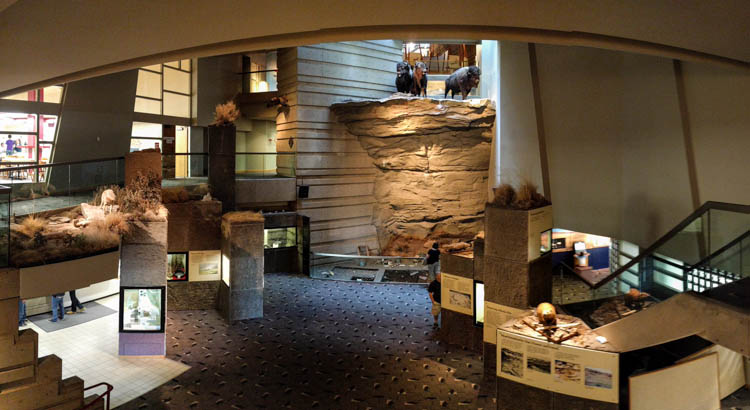 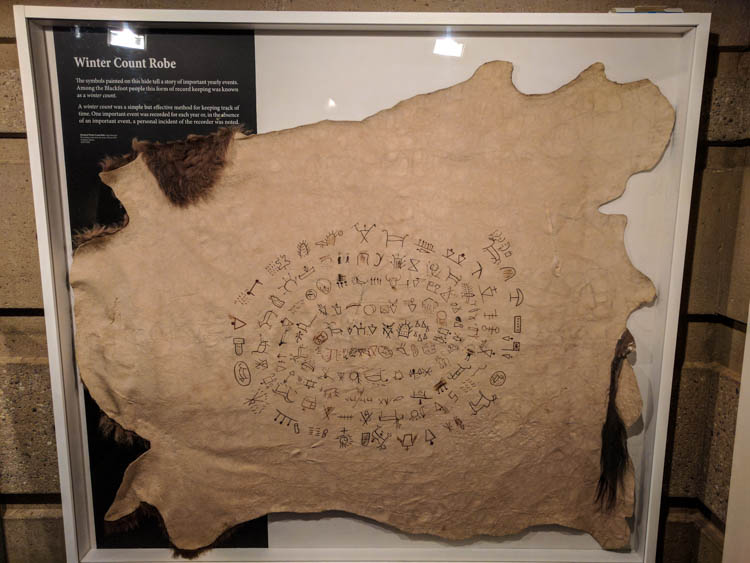 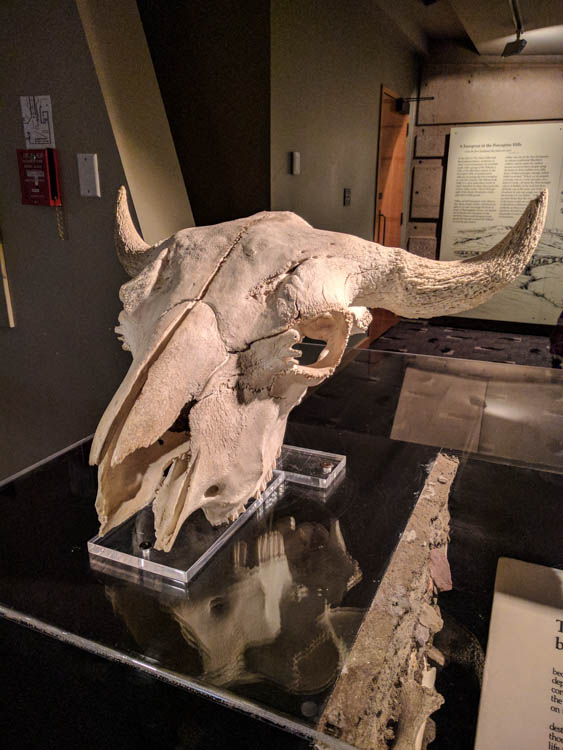 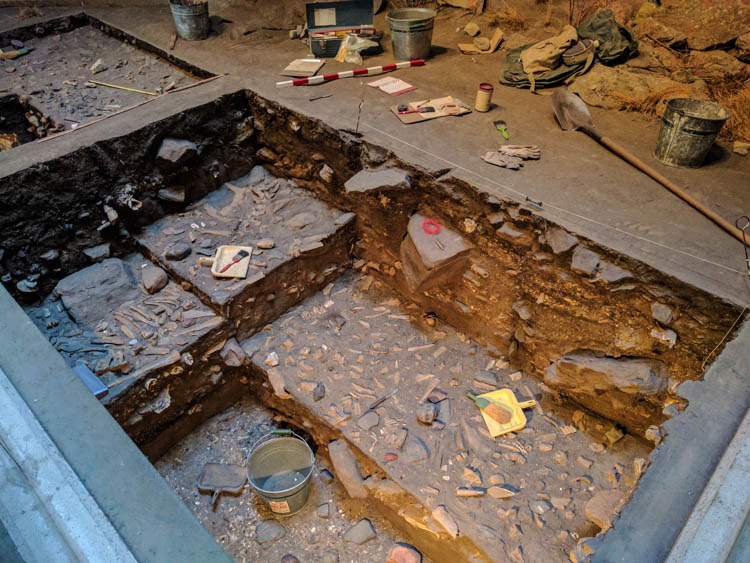 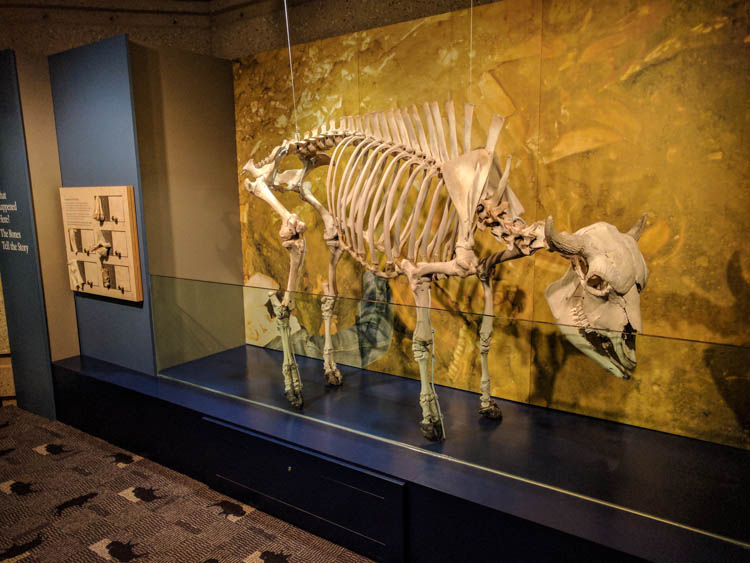 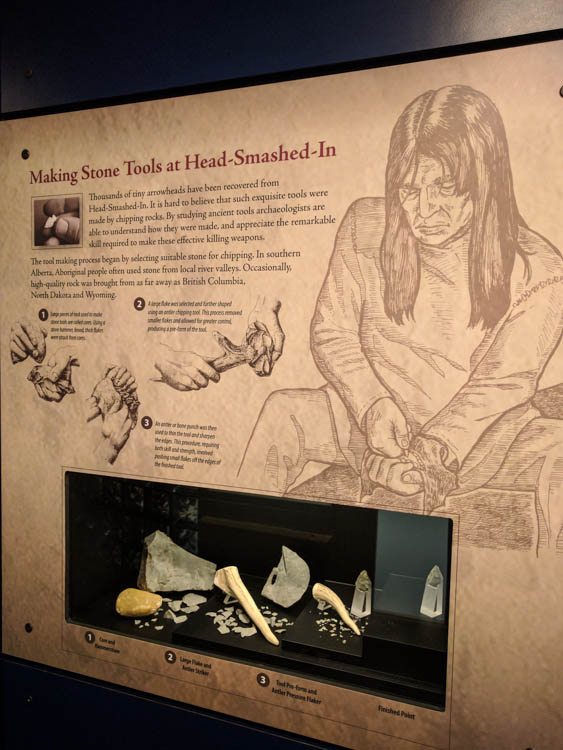 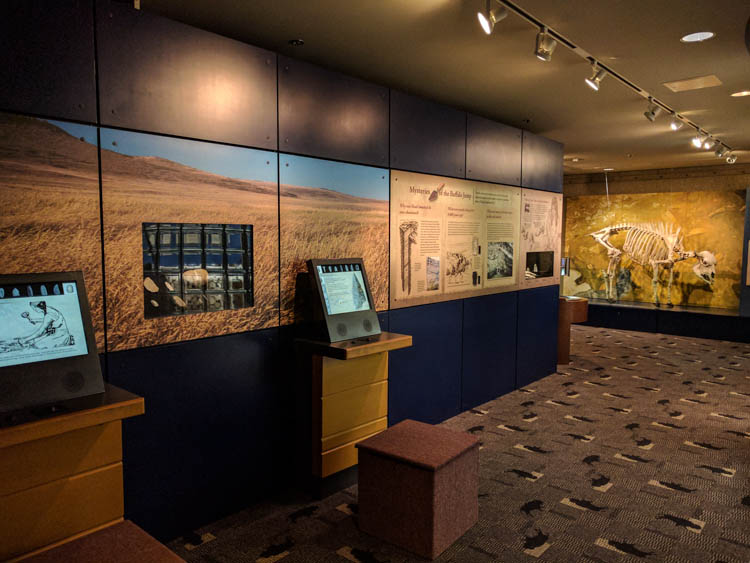 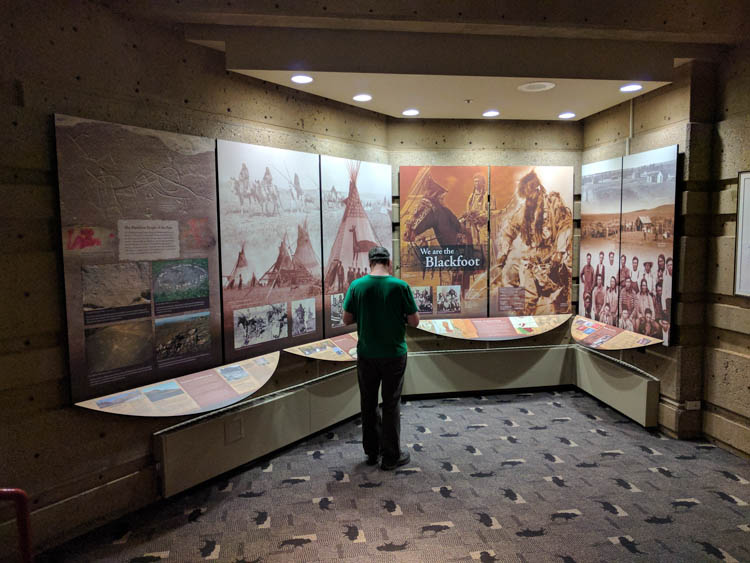 Go On A Virtual Tour With Google

Google maps street view includes a tour of the outdoor pathways around head-smashed-in Buffalo Jump. You can access the outer loop trail for free, but to get to the top, you’ll need to pay admission. 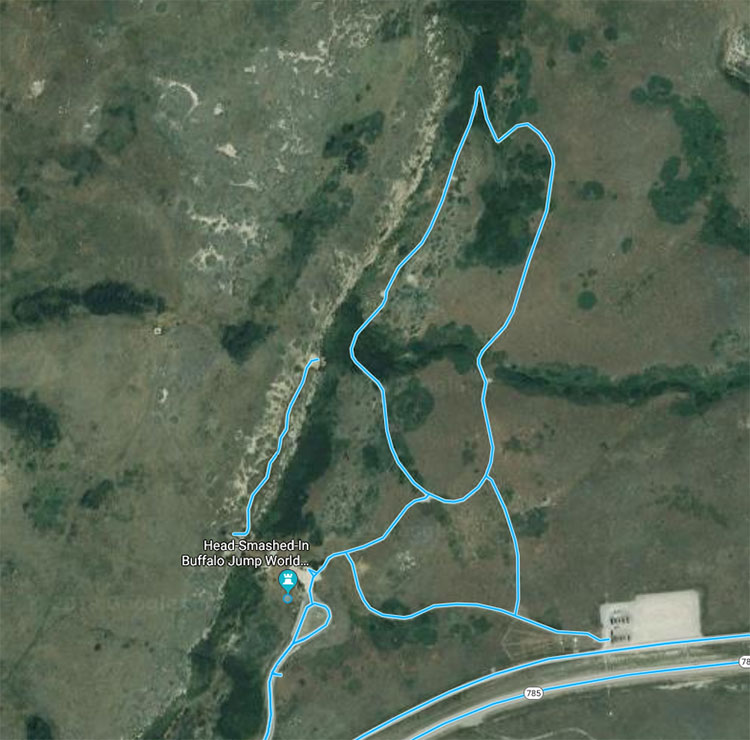 This video from Travel Alberta explains some of the history about the buffalo jump and other info you may want to see before going. It’s got some really beautiful video too, check it out.

Everyone should visit at least once. Perhaps drive down on a weekend and take in some history?