If you know me at all, you’ll know I’m a huge fan of the local craft been scene in Calgary, and Alberta. I was at Beerfest earlier this year and while it was a blast and I had the pleasure of trying many yummy beers (I was also judging), one booth caught my eye more than the others, and they didn’t even have beer samples.

CanKeg is a small business located here in Calgary that sells stainless steel growlers and mini kegs that are compatible with a C02 tap kit, plus they offer custom laser etching! You can put your company logo on them, your face, or whatever else you want. These growlers and mini kegs are made with grade 304 steel, which is virtually indestructible and should last you the rest of your life. With their C02 tap kit you’ll be able to have pressurized fresh beer wherever you are – and it’ll last for weeks! If for some reason you want to keep beer for a long time instead of drinking it.

Check out their 1 minute video for a demo of how it works:

Don’t get me wrong, I own several glass growlers from a variety of rad local breweries, but there’s no denying that there are some big differences between the two.

What exactly is a beer ‘Growler’?

Easy! It’s a glass, ceramic or stainless steel jug to used to transport beer. They typically come in three different sizes: 32 oz (half sized), 64 oz (standard growler) 128 oz (double sized growler). They’re most often used to bring fresh beer home from a brewery, or to bring somewhere such as camping, work, or church. The 64 oz glass growler is by far the most popular, often being available for about $6 at most tap rooms. To fill a growler it’ll cost anywhere from $10 to $14, usually. Of course there are more premium brews out there that will fetch a higher price, but most local beer is pretty cheap. Breweries often have sales for cheap growler fills too. A great investment. 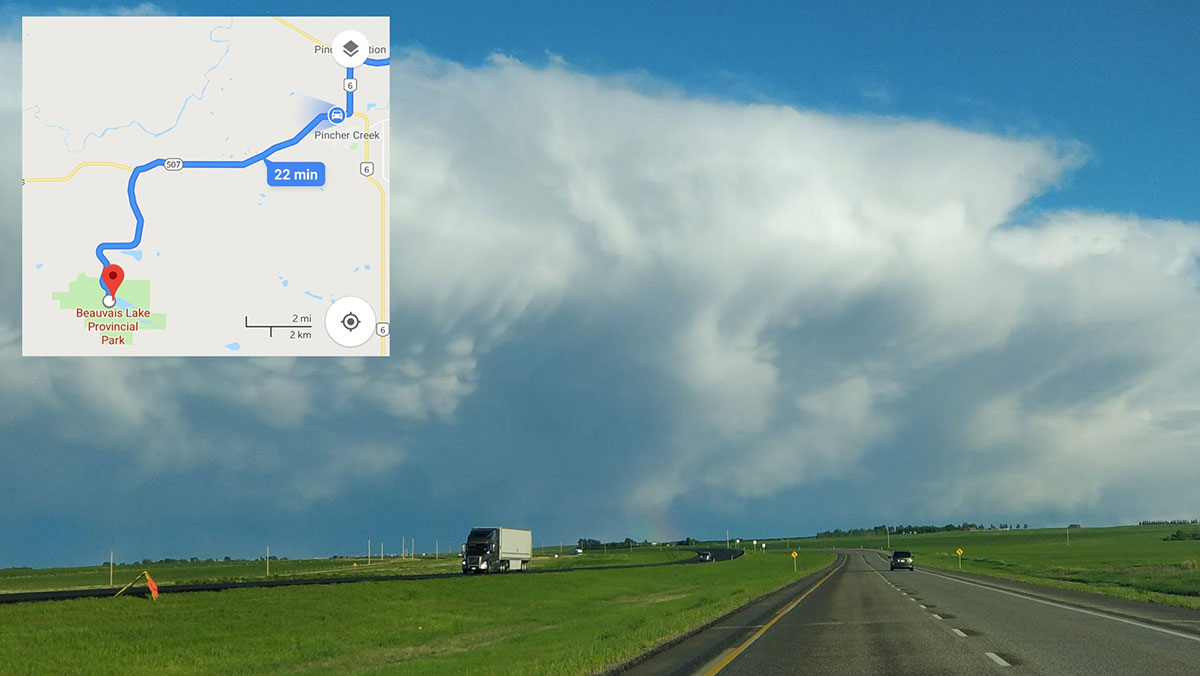 Had an opportunity to head out to Beauvais Lake campground this past summer. Never heard of it? I hadn’t either. It was suggested by Brian Pincott as a place to camp, as he had always wanted to check it out. Brian was supposed to come with, but had to bail last minute. Sucks! We still went, because camping.

Beauvais Lake provincial park (and campground) is a small slice of land a short 20 minute drive from Pincher Creek, tucked into a little valley. Beautiful place! 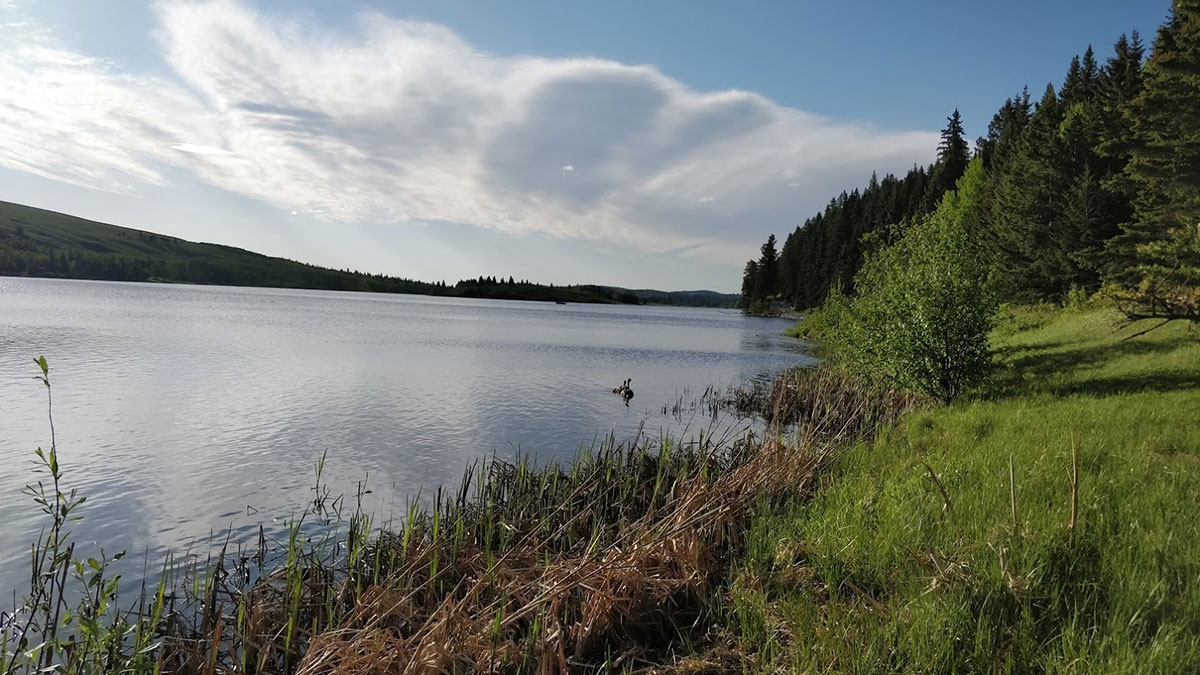 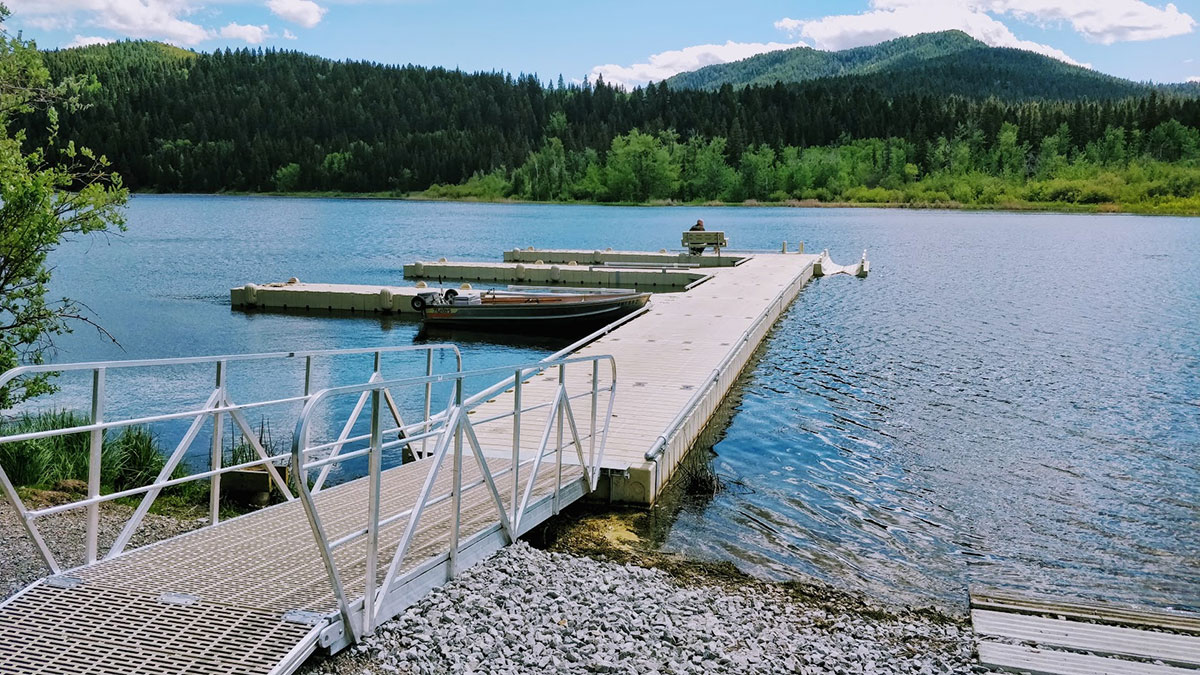 While we were fishing two conservation officers dropped by to check for fishing licenses and to make sure we weren’t doing forest heroin. They were very pleasant, no issues. Really respect the job they do. 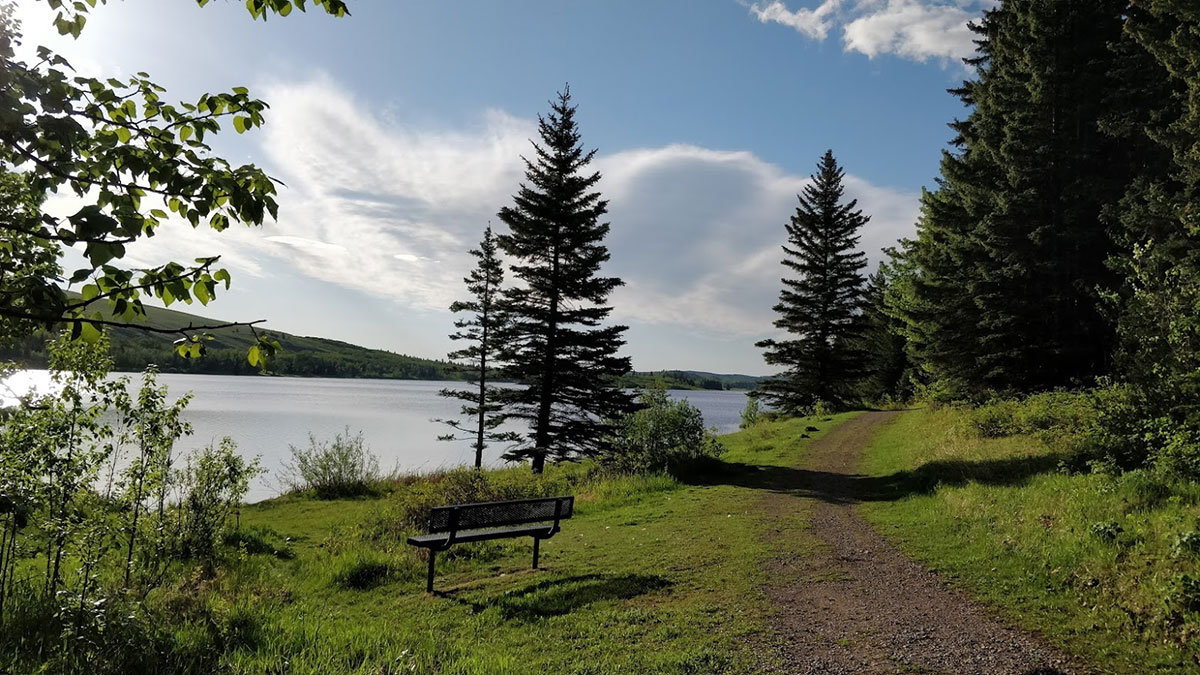 Apparently there’s a lot of bear activity around Beauvais Lake, but we didn’t see any. Does a bear shit in the woods? Yes it absolutely does. Always carry bear spray when walking around in a place like this. There’s supposedly some decent sized trout in this lake, but I wasn’t able to catch them. Did see several smaller trout but they weren’t interested in what we were using. Lots of weeds near the docks. Nonetheless, gorgeous place and highly recommended for a place to camp.

Here’s my CanKeg growler! This is the CanKeg “Tallboy” 128oz growler. As you can clearly see, our profile picture/avatar was laser etched on the side. Isn’t that the coolest shit?! 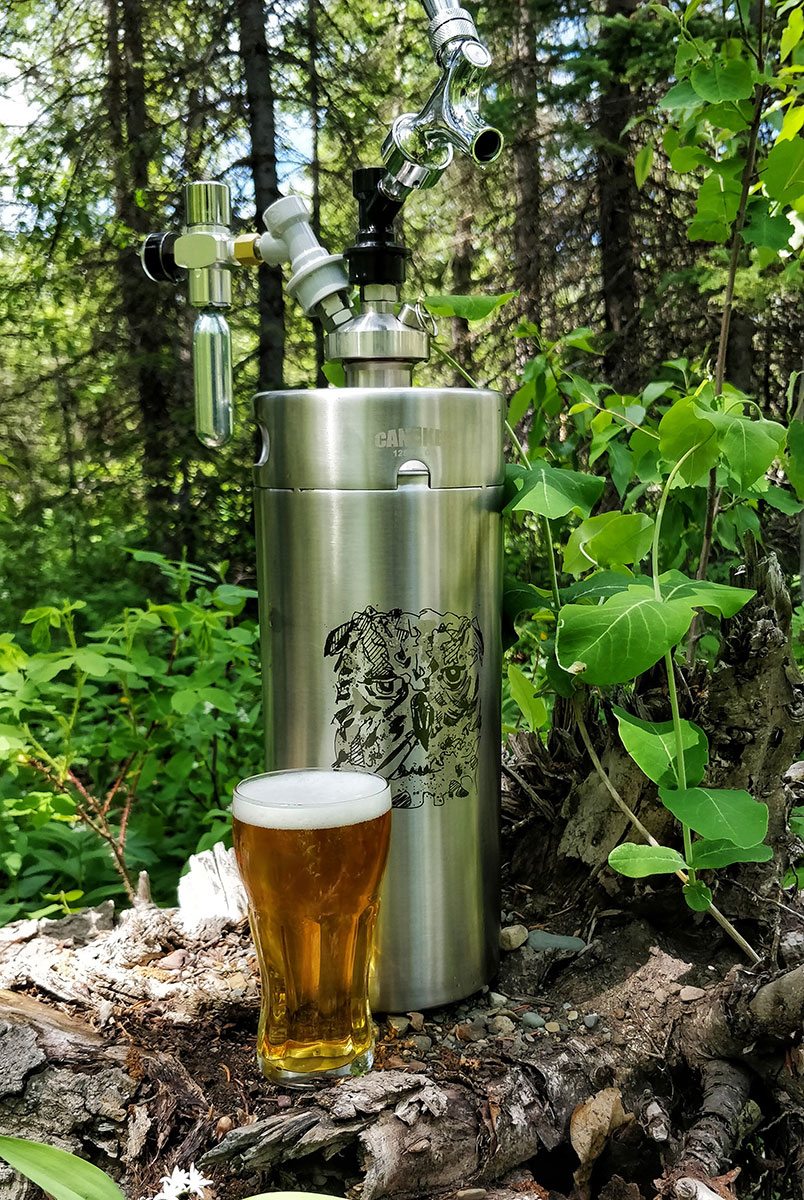 Before we left Calgary I stopped by Liquor Depot to fill this bad boy up! Any place that fills growlers should be able to do it. Went with Toolsheds People Skills cream ale. It was actually pretty funny watching the staff members try and figure out how to fill a 128oz growler using their ‘normal’ 64oz growler setup. They had to dig in the back to find a special hose, but they did it! Kudos to them. It came to like.. $22? Pocket change. That’s over six full sized 20 ounce pints.

Transporting the CanKeg was super easy, as you simply just screw the lid on the top of the growler. The beer doesn’t get put under pressure until you’re ready to serve it up.  Tossed it into the truck and off we went. 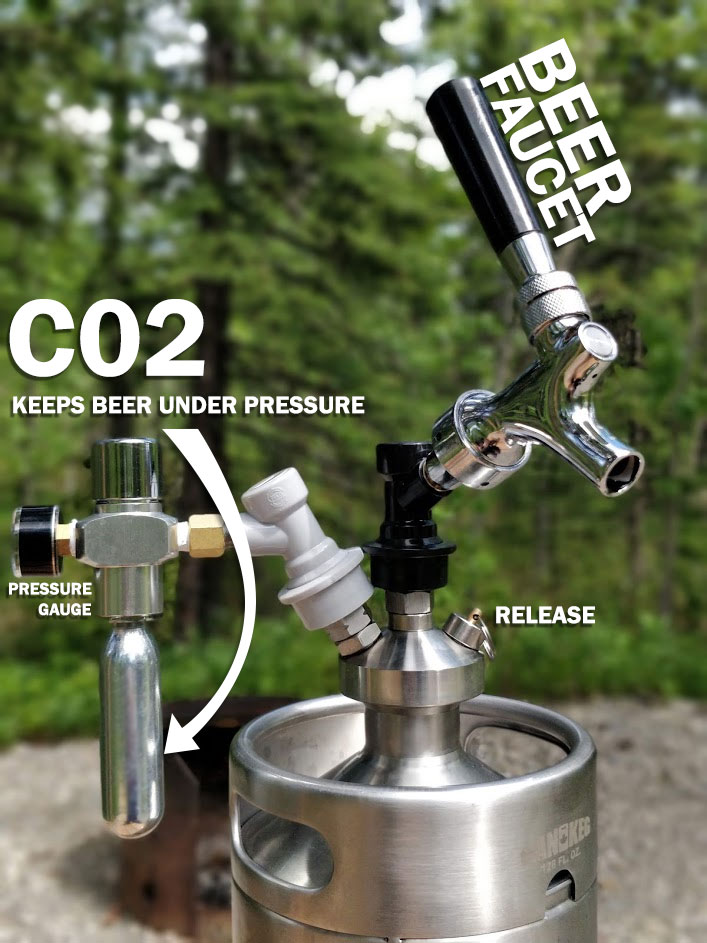 Setting it up only took a moment. Unscrew the lid, attach the mega cap, the taps, etc. In the video at the top of the page they show how to do it. Basically it’s idiot proof, and that’s coming from someone who once baked a pizza still in the cardboard. The only thing I had trouble with was figuring out how much pressure I needed for a proper pour. I’m not really one for following directions, so a little trial and later and I had it figured out. Until you find the sweet spot, you’ll bring up a lot of foam. What’s the sweet spot? Hell if I know.

When you’re finished, taking it apart is even faster. Pull the release, pull the taps off etc. No sweat.

Camping recommendation: put your CanKeg in a mountain river, if you get the chance. It’ll keep your beer really cold and there is no chance of it floating away or breaking. Plus it seems like a really Canadian thing to do.

CanKeg has the capability of adding whatever you want (within reason) to the side of your stainless steel growler! Your name, merry Christmas, a photo of a celebrity (I recommend Nicolas Cage), a company logo, happy 50th birthday, your dog, Nicolas Cage, whatever you want. Perhaps get one with Nicolas Cage on it?

Not something you can do with a glass growler now is it?

Our homie Mr. Fabulous (we just call him Ryan as a nickname) had one done up for him and his husband Rob. He wanted me to make sure to tell you it’s resting on “crushed blue velvet” lol 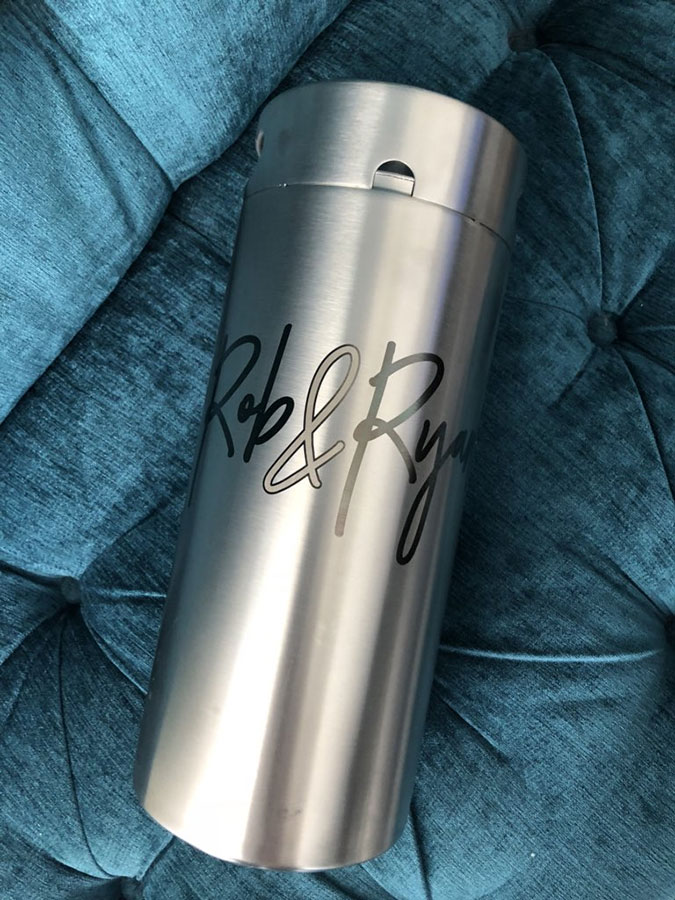 These are something you’ll have for the rest of your life, with your own custom permanent design. Yes they’re more money than a glass growler, but you really get what you pay for. Look how cute the bunny is! And unless you throw it into a volcano, you’ll have it forever.

@cankeg put my bunny on a beer can!!!! I’m making the same face!!! 😃 check them out for supplies to keep your bevies cold and safe!!💖💖💖 . . . #growler #beerkeg #cankeg #beercan #beerbunny #happyday #fridayfunday #coldgarden

No sir ma’am. At it’s most basic level, it’s a jug you can put anything in, the same as a typical glass growler, so if you need a temporary home to store a liquid you’re all set. If however you want to not only temporarily store liquids but make them awesome, you can do that too. CanKeg also has nitro taps! Check it. You can have nitro beer or coffee at home, or anywhere. Good luck doing that with a glass growler without C02. Also if you really wanted to you could put milk or gravy or sriracha in a growler and hook a tap up to that.

This is only s small selection of what they offer. Go see their products page for everything. I don’t even know what most of it does. 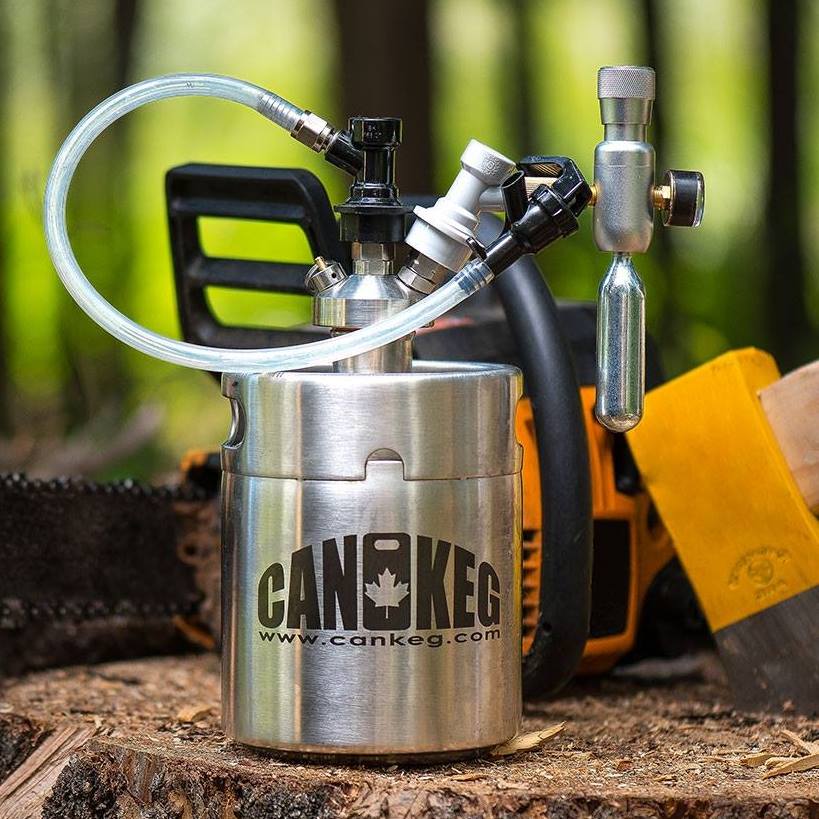 See their website for all of the information you need, or give them a shout.

FozzyFest – a three day music festival on the beach!