FozzyFest – a three day music festival on the beach!

Back in September 2018 I attended a music festival called FozzyFest, and I had an amazing time and I would like to tell you about it. It’s a 3 day party, basically, located on a beautiful beach in the eastern Kootenay mountains in southern BC. No, it doesn’t have anything to do with Fozzy the bear, or that wrestler dudes band called Fozzy. Everything needs a name right? That said, Fozzy the bear is kind of an unofficial mascot. From their website:

In the summer of 2005, our first year, 30 or so close friends went camping to celebrate the birthday of one Shawn Lafleur aka “Fozzy”. We rented some minor sound equipment to play some tunes while we were out in the bush. We had such a blast that we decided to do it again the next year and invite some more people. When sending out the emails we figured we had better come up with a name for the event. Shawn has always had the nickname “Fozzy” and since it was originally his birthday celebration, someone proposed “FozzyFest” and the name stuck!

There, now you’re all caught up.

I danced, drank, fished, and made a bunch of new friends. Can’t wait to go back next year to do it all over again.

I made a video! check it

A music/arts 3 day long festival! DJs come from all over the world to play funky tunes. Basically you’re camping with hundreds of other people, strangers and friends, plus there’s lots of music, entertainment, dancing, things to see, workshops, even food trucks. The scene: you’re in the southern Kootenay’s, on a forest peninsula, surrounded by lush forest and crystal clear freshwater, and shitloads of cool people. 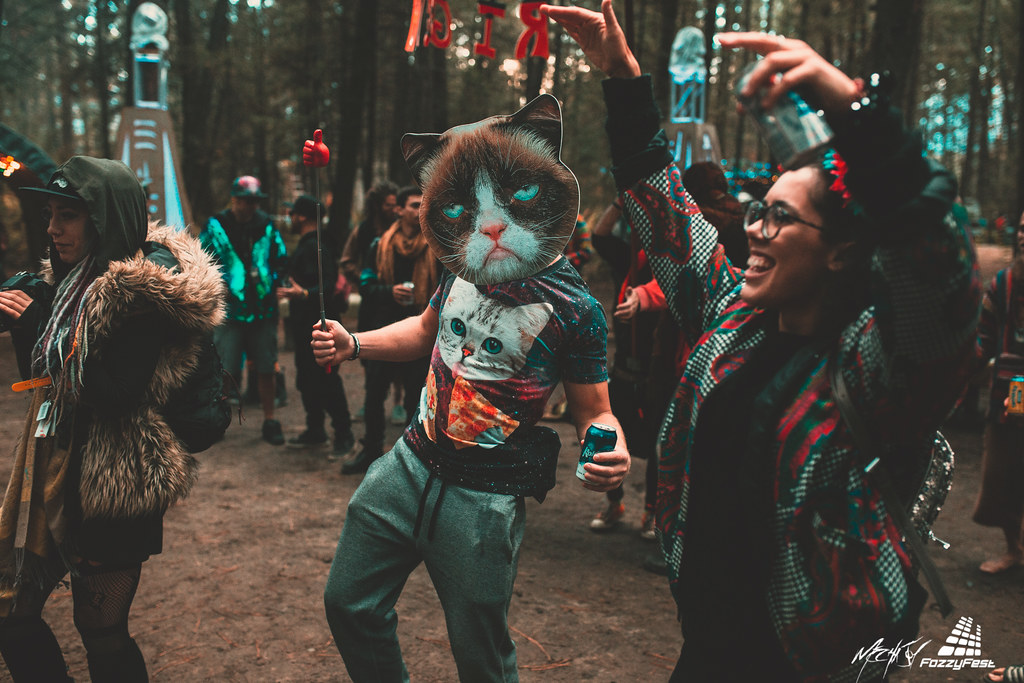 If you’ve never been to a multi-day outdoor music festival before, I highly recommend doing it at least once. I’ve only experienced FozzyFest but there’s so many of them out there! I hope to experience Freezer Burn, Bass Coast, and of course Shambhala. The friendly atmosphere of love and acceptance fills every inch of the fest and you’ll be welcomed with hugs, smiles and highfives everywhere you go. 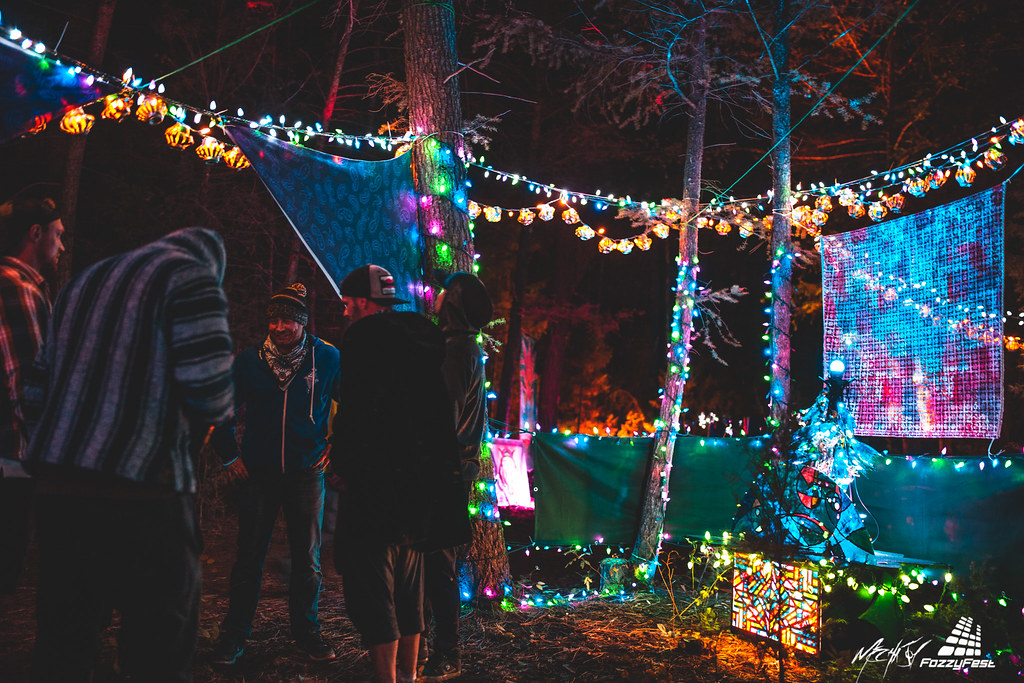 FozzyFest promotes a good vibes environment only, in that, everyone is accepted. There is no room for assholes or negativity at Fozzy. Everyone is family and will treat you with respect. The same is expected in return. Good vibes only. 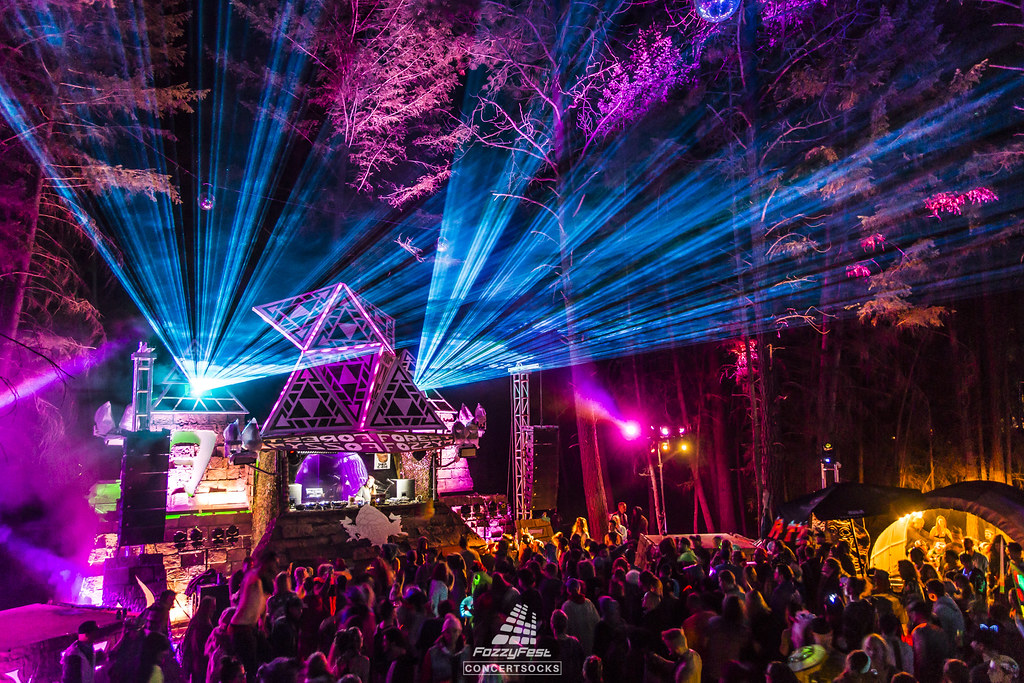 FozzyFest has 2 main stages blasting tunes from a variety of genres, but mostly EDM (electronic dance music), for 18 hours a day! Drum and bass that’ll make your skin vibrate. I’m actually not a HUGEEEEEE fan of EDM, but it’s growing on me like a fungus. One of my favourites is The Funk Hunters. I’ve seen them several times here in Calgary at shows and events and they’re always such a good time. They’ll actually be in Calgary in December! Go see: https://thefunkhunters.com/pages/gigs. Anyway .. /fanboy.

There is a third stage called The Crystal Cave on the beach that plays more laid-back chill beats, if you need some down time to recoup but still need music. It’s shaped like a pyramid and puts on quite the LED show. They all play music at the same time (some going later than others) and you just kind of gravitate to what sounds good. Each stage has a set list with the times/who’s playing, in case there’s someone specific you want to see. The music goes until like 5-6am too!

Something else worth mentioning is ear plugs. If you’re going to a music festival like this, or any loud concert, bring good ear plugs with you. Get something decent that will protect your incredibly sensitive ear drums, the speakers are no joke. If you get up close without protection you could permanently fuck up your hearing. Like buying a good pair of shoes, don’t skip out on something that protects your body. Don’t get the Walmart special of 99 cent ear plugs. Get something with noise filtration. If you’ve ever had ringing in your ears after listening to a concert, you just permanently damaged some of your hearing cells. What you hear is called Tinnitus and it’s scary as hell. Some people have to live with that 24/7.

FozzyFest is held at Big Springs campground, located about 30 minutes west of Grasmere, BC. It’s a beautiful sandy beach campground with lots of tree cover and places to set up a tent, with plenty of room for RVs and campers too. It’s the perfect venue given the kind of event FozzyFest is. Lake Koocanusa is massive, pristine, warm and welcoming. People rent house boats and sleep on the water. How cool is that?! 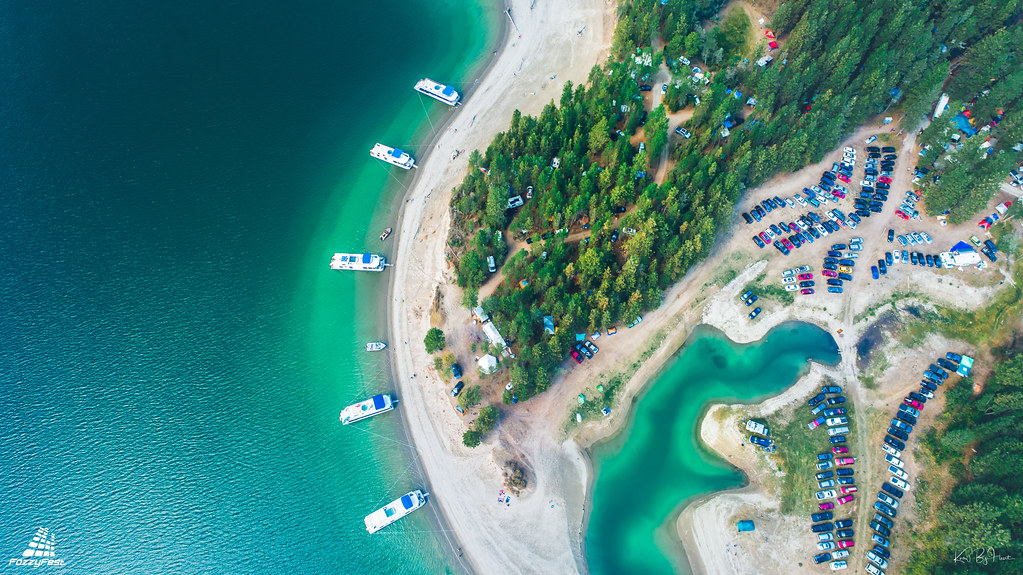 There is a potable water pump, outhouses, fishing, and zero cell service or electricity. It’s not the most accessible campground but is very worth going to, especially if you need a break from civilization. If you’re able to camp at Big Springs when the festival isn’t happening, totally do it. I did that once. 3 days of campfires on the beach, warm winds, fishing and music. It’s the damn best and I want to go there right now.

The only downside is how far away it is from Calgary. Maybe that’s a plus? It’s just over 4 hours drive from Calgary. Not horrible, but long enough that your ass might get sore.

This year we arrived kind of late on day 1. Oops. Not a big deal, but the best spots for setting up your tent go pretty quickly. If you’re going with a group of people, you’ll also want to snag a big enough spot for everyone. We ended up having to camp on the side of a hill, several campsites deep. Not the worst place to camp, but I’d prefer not having all my things roll away of I put them down. It started raining as we finished setting up our tents and tarps, and then the sun went down. Setting up a tent in the rain sucks, and setting up a tent in the dark sucks, so I made out pretty good!

Grabbed a couple beers and headed for the forest stage. The music was blasting and the crowd started to grow as other people started showing up. The rain was starting to come down pretty heavily but it wasn’t that cold, and combined with the radiating heat from dancing bodies and booze, or nobody even seemed to notice.

This was actually my first time attending FozzyFest on the beach. I did attend FozzyFest in 2017 as well but it had to be moved at the last minute due to the crazy wildfires that were happening at the time. FozzyFest was instead held at Metis Crossing, an RV park? / ranch about an hour NE of Edmonton. Not nearly as nice of a venue, but it was still good times. I had camped on the Big Springs beach before, but without the music festival. The beach is worth visiting in either case!

During my time at Fozzy this year I tried to keep a reasonable sleep schedule, so I was in bed by midnight. I’ve been trying to get my sleep back on track for a while, festival or no festival. Also? so I could wake up early and fish. I love fishing. My days were spent fishing in the sun all day and partying all night with good friends. There were a ton of workshops and stuff going on, but I’m kind of a loner and would rather do my own thing.

I actually randomly meet up with someone cool this year at Fozzy! Marta from CJSW. She and I canoed and fished together, it was a blast.

Once the sun goes down the festival really gets started. One second you’re standing with friends taking in the music, the next you’re all walking briskly somewhere else for some reason. Meet a friend? Heading to a different stage? Back to camp to refuel? Who knows. Maybe you don’t even go with them and you head off into the crowd by yourself to meet new friends. That’s the beauty of FozzyFest, there’s good vibes oozing out of every inch of that place – and person. 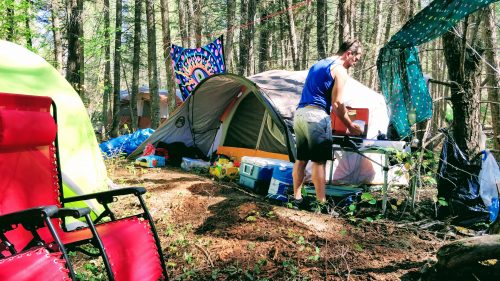 There’s also a warm feeling of safety in the crowd, in that, everyone is kind of keeping an eye on everyone else. Perhaps you drink or take a little too much of something and need help or something, who knows. Happens to us all. They have something there called The Sanctuary. The Sanctuary is a harm reduction safe space provided for people need it, staffed by volunteer medical professionals to care for you. It has lots of soft stuff for you to sit down on, chill lighting, private. First aid is also provided on site here. FozzyFest is held a long way from civilization so it they make sure to have everything under control should shit go south for anyone. It’s very reassuring actually, and there is signage all over the place about it. Very cool!

That’s basically it. I fished during the day and jamed out to cool music all night, until bed. I drank many, many beers. Something fun: I kept food in my tent! First time ever! I know it’s still technically a bad idea, we are in a forest and all, but like, my tent was surrounded by hundreds of other people. If a bear were going to get my scooby snacks he’d have to go through so many other tents and stuff. It was so cool having a cooler in a tent! All the pepperoni snacks and cold’ish beer I wanted.

Having attended two FozzyFest’s now, I’m officially in love and can’t wait to go back. It’s an experience that I highly recommend to everyone. 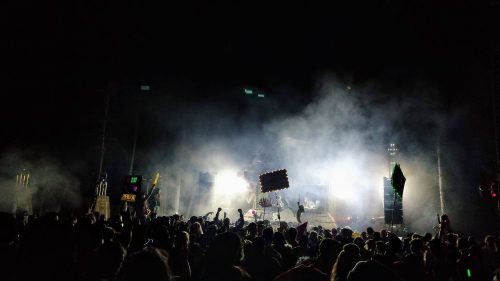 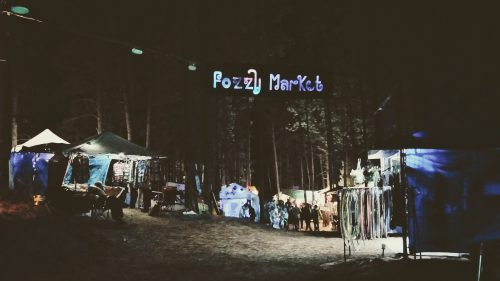 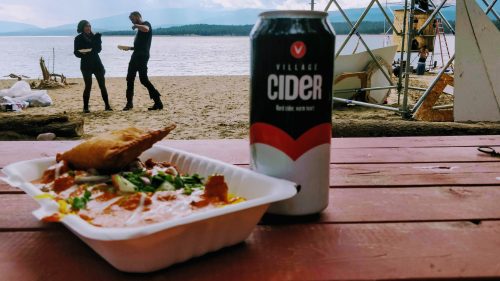 Indian curry and cider for lunch, on my last day. Yum.

The future of FozzyFest is uncertain. For 2019 they were denied a permit to use the Big Springs Campground again on Lake Koocanusa (too many residents complaining about the noise). I hope they can figure something out, it’s good times.

Getting From Calgary to Banff: The Complete Travel Guide