Winchell Lake has some great fishing, but it’s surrounded by ankle deep wet marsh. Wear big rubber boots if you plan on going to fish here, or bring a second pair of shoes for the ride home. Winchell Lake itself is beautiful and the landscape surrounding it is very green and lush, and full of bugs and dragon flies. It’s a somewhat shallow lake, surrounded by trees and your typical Albertan wilderness. Bears sometimes frequent the area, so not a bad idea to bring bear spray if you’re going to be away from your vehicle. The south side of the lake is surrounded by trees and inaccessible by foot. If you have a small inflatable boat or pontoon, Winchell Lake would be a great place to take it. Also a good lake to fly fish. I wouldn’t recommend bringing small kids to Winchell Lake though, due to the unpredictable drop offs around the lake.

Fishing in Alberta is such a treat!

Located just south of Water Valley, Winchell Lake is about a 1 hour drive from Calgary via Highway 1a and through some range roads. It’s very easy to get to by car and you can park right beside it when you get there, lots of parking for everyone.

Township Road 290A will take you down beside the north end of the lake. There is no way to access the south side of the lake by land. 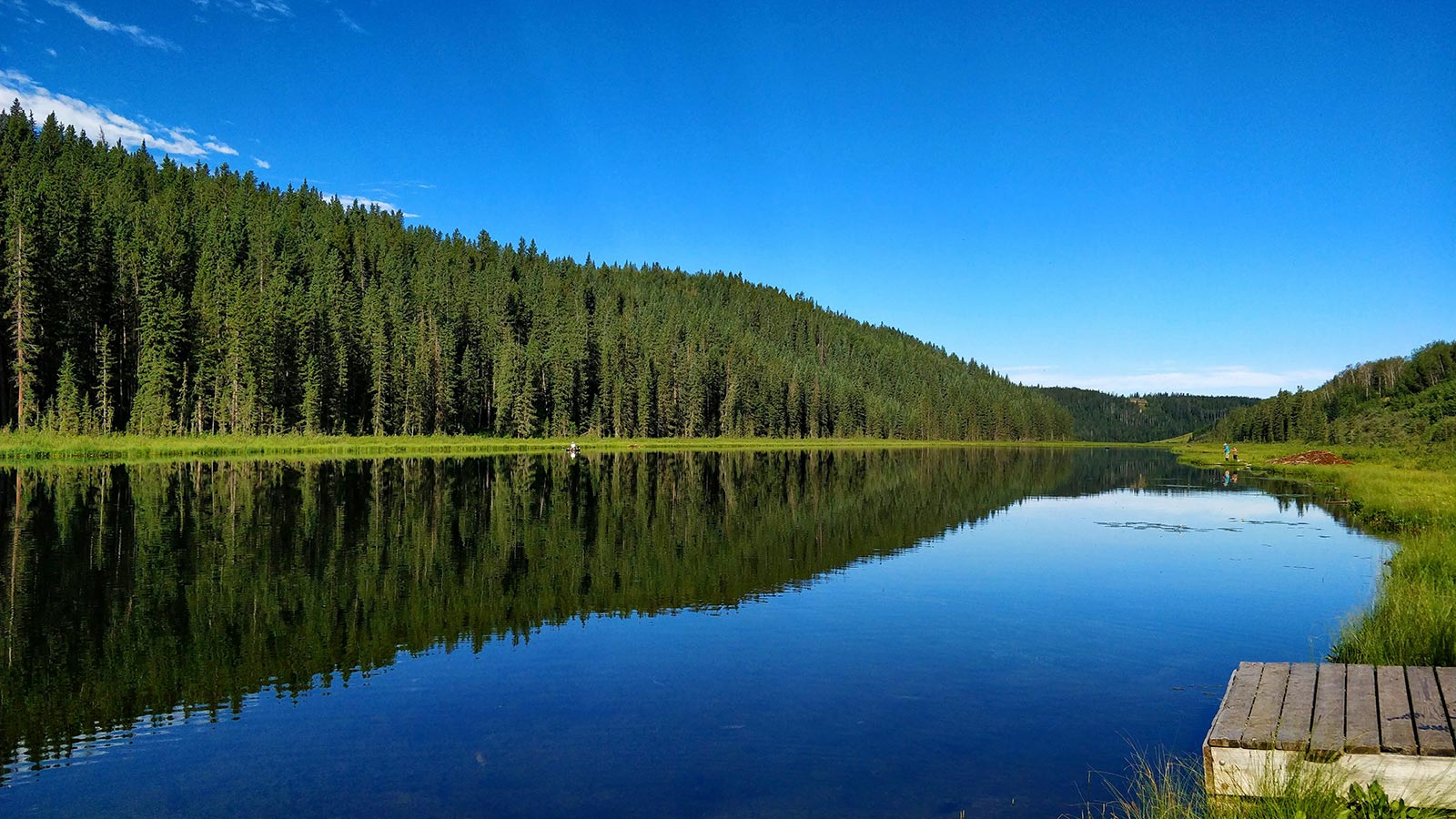 We spent a few hours here today trying our luck. The sun was out in full force, it was hot and gross, but the wind picked up for a bit and my butts moved in, nice day out. We didn’t catch anything, but did see someone else pull a large trout of some kind out. A bad day out fishing is still better than a good day in the office, so they say. There were a couple of guys floating around, but I didn’t see them catch anything either.

Especially if you’re bringing small children (not recommended). The land is very swampy, and it feels like it’s floating on the top of the water. Because it actually is! In the below picture, there were a good 8-10 feet of water directly under this. You can imagine how bad things could be if a kid was playing and fell in. I almost fell in myself, I stepped on the small board – which didn’t really have anything under it. Scary. These wood pallets are placed here and at various other places around the lake, due to how marshy and spongy it is. If these things weren’t there, you’d be standing in ankle deep water.

Also, we heard either a moose or cows nearby. Murrrrrahhhhuhhhhhhhhhhhh! 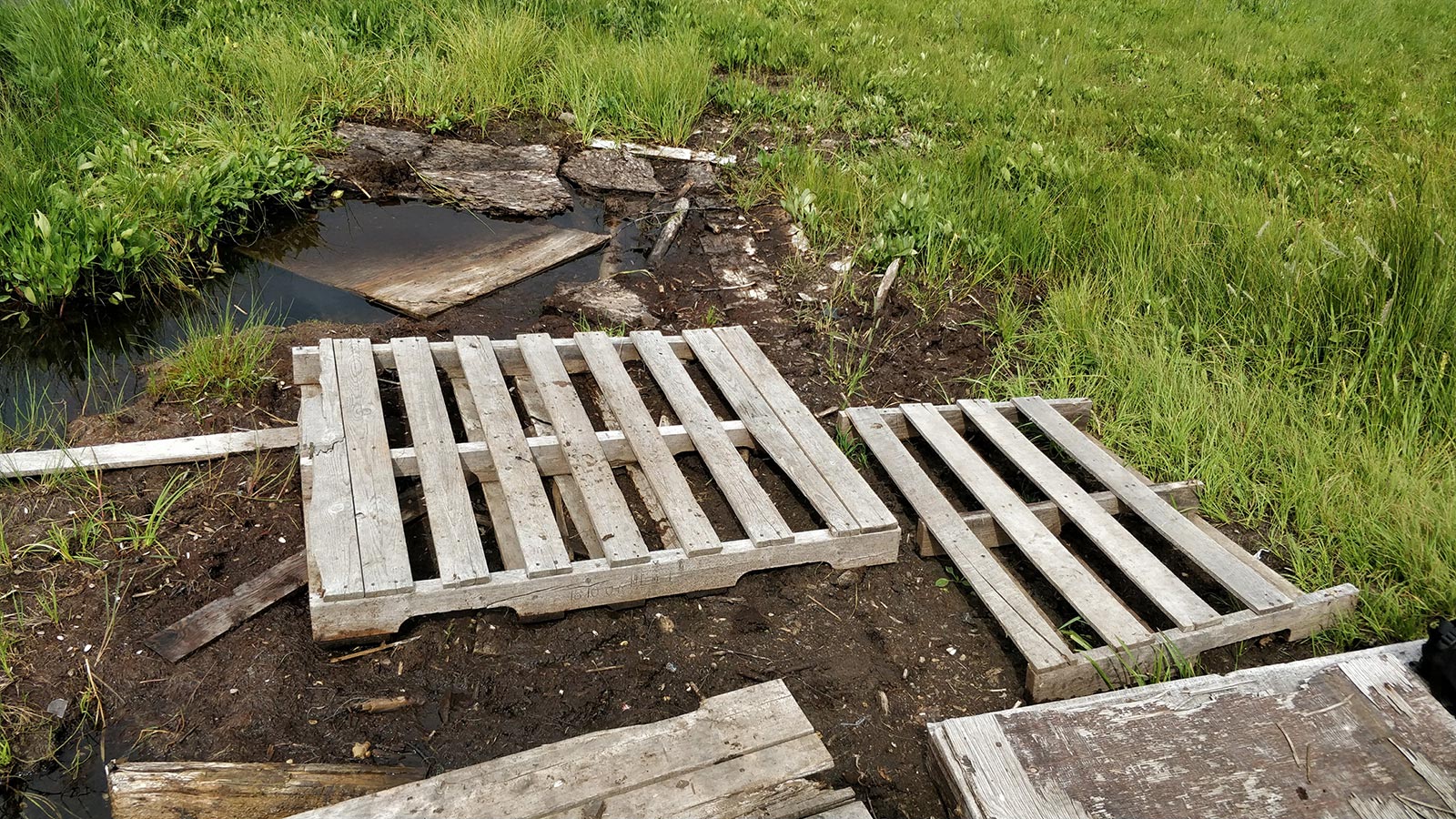 We saw a duck close up! He casually swam around the pallets, eating bugs, doing duck stuff. He hung out for a bit then flew away. So long duck. We also saw a deer (on the drive), and a frog!!! He was just swimming around being a frog. I tried to catch him because hey, free frog! I was not quick enough. Bested by a frog.

The photos don’t show just how many dragonflies were buzzing all over the place. 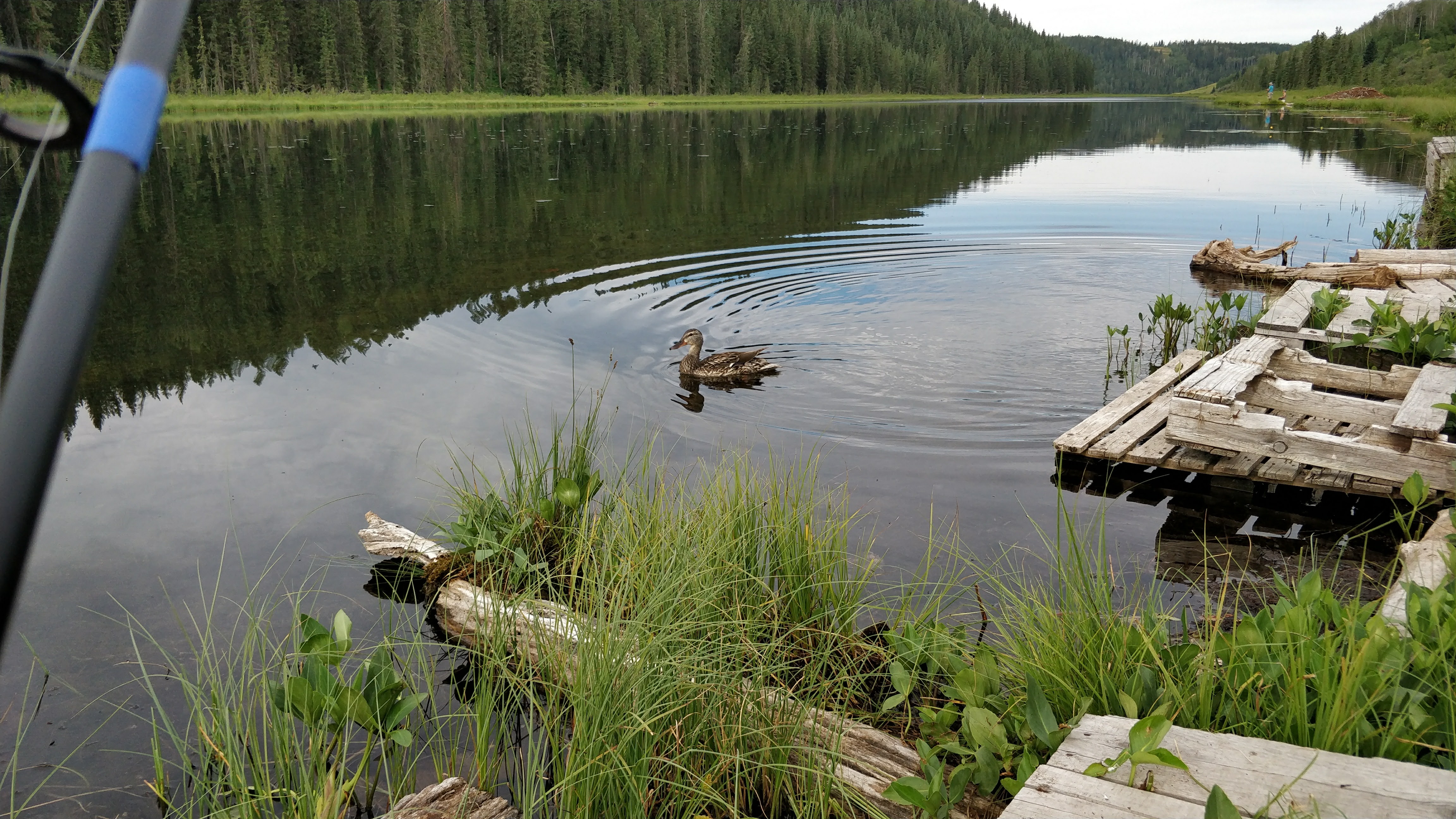 So long duck. Not bad for a cell phone picture I suppose? 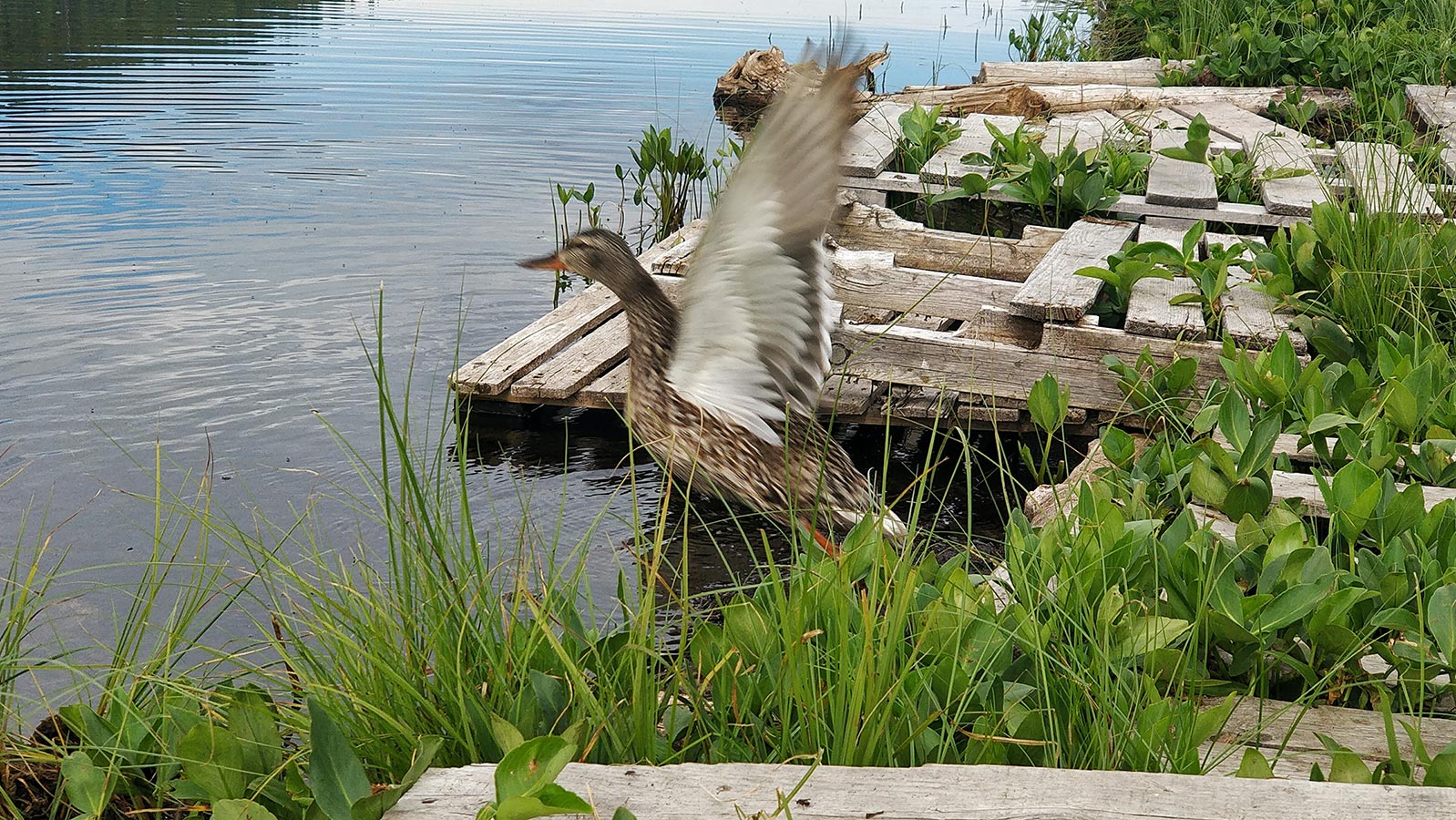 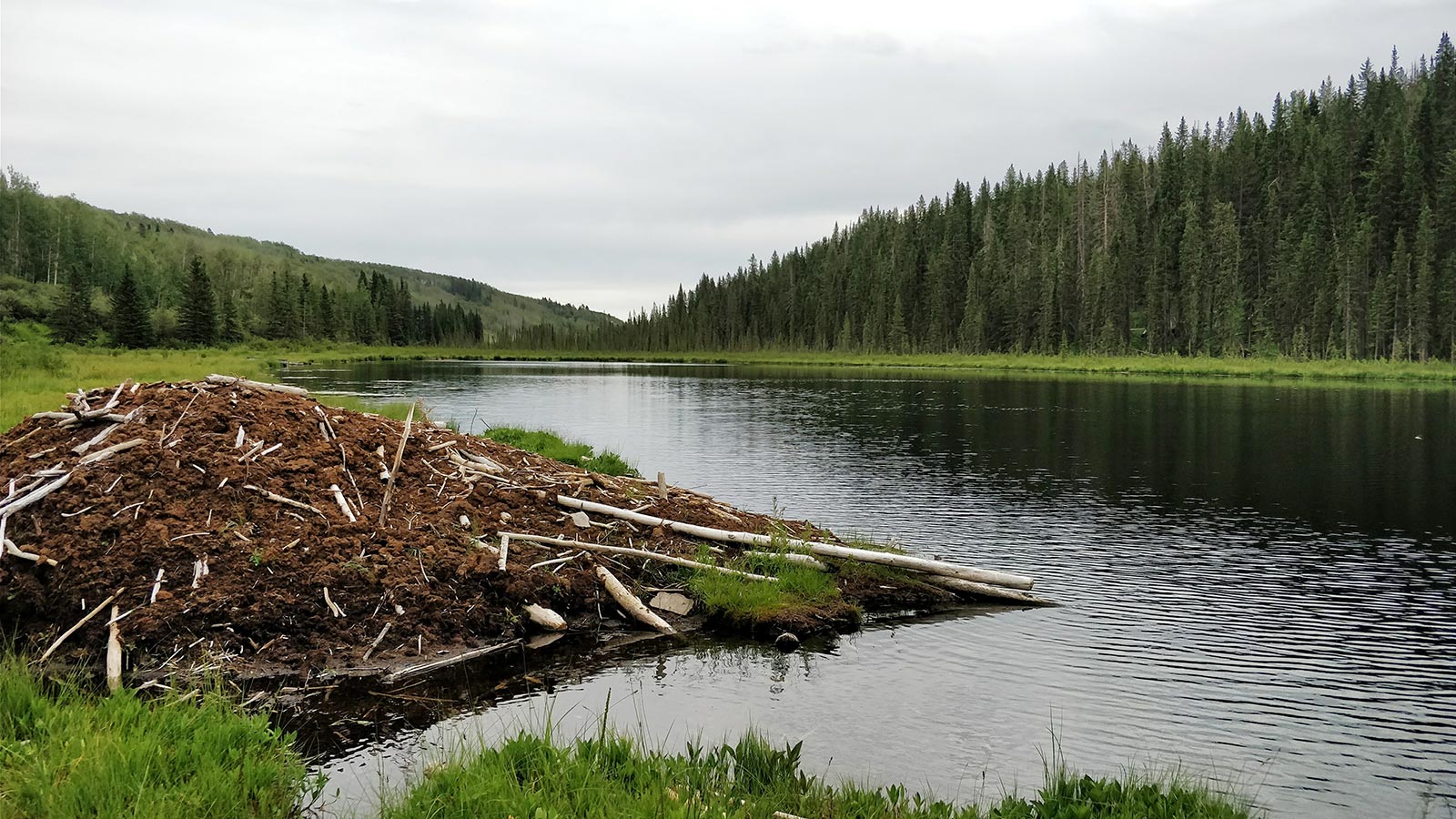 Well, we didn’t catch anything, so that kind of sucked, but it was still great!

We fished reel and fly, not even a bite. Fish were jumping all over the place, they’re certainly in the lake, but luck was not on our side. I used a variety of spoons, spinners, jigs, a buzz bomb, even tired a fly attached to a bobber. Nadda. With the amount of bugs flying around this lake, these fish are extremely well fed and my wimpy lures ain’t gonna cut it.

This would be a really good lake to boat on. If you’re thinking of bringing a boat to Winchell Lake, just a heads up, there is no dock. The east end of the lake is also filled with weeds. Towards the middle of Winchell it also had weeds but not nearly as many as the tip. Deeper waters, too. I read online that there’s a vehicle at the bottom of this lake? Fallen in from clearing ice or something. 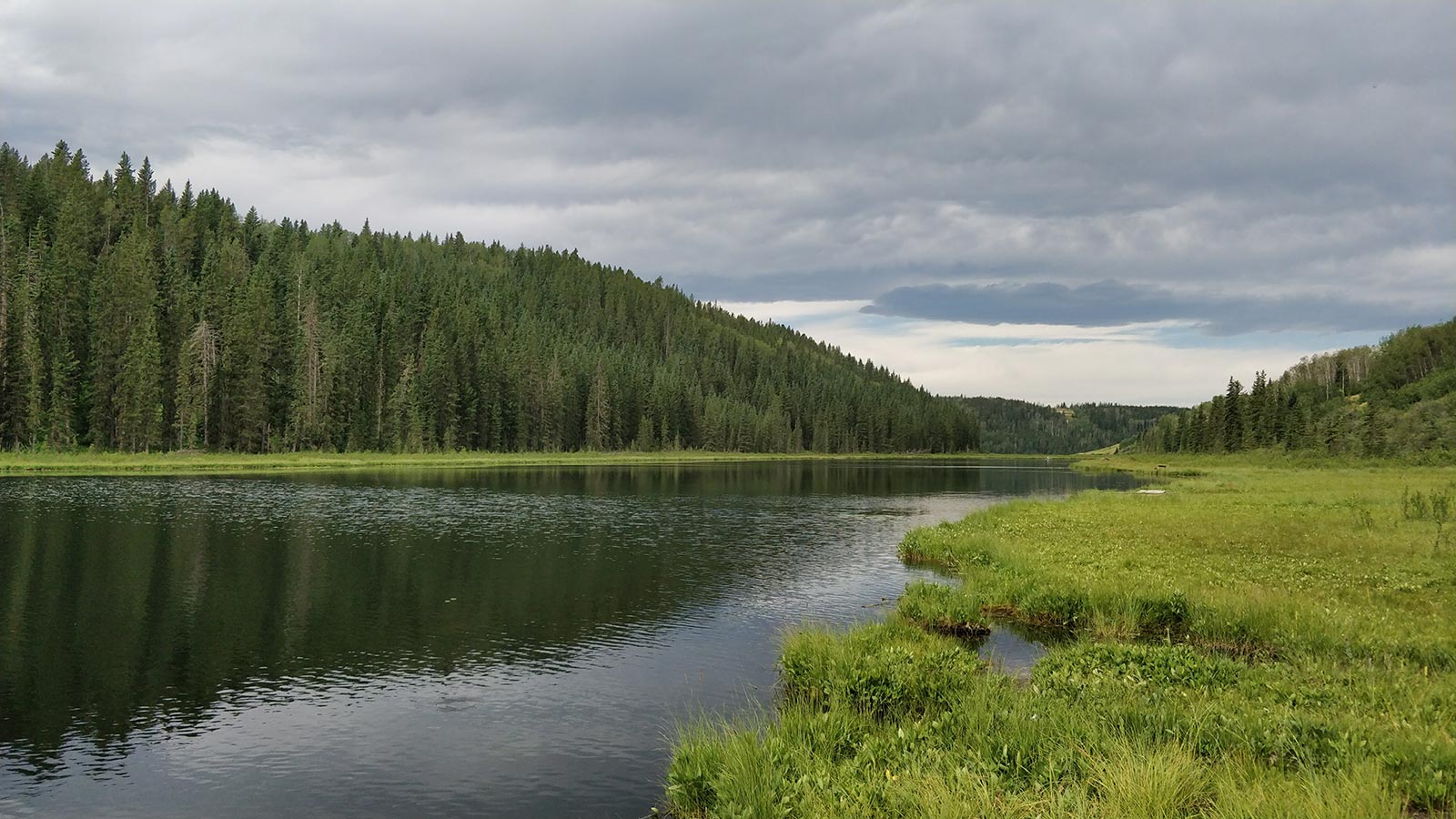 What started out as a bright and sunny day turned a bit windy towards the afternoon. It was still wonderful to get out there, and I can’t wait to go back and conquer this lake. After deciding to call it a day on Winchell Lake, we headed to a place called Market Junction, in Cremona, for coffee and apple pie.

Best of luck if you head out to Winchell Lake!