Historical Calgary, and what it looks like today in the same spots

Ever look at an old-timey historical Calgary photo and wonder what it might look like today? Historical Calgary looked pretty interesting! The lack of cell phones is striking. I wish we could go back in time and record Google Streetview data to compare it to modern day Calgary. Maybe Google will figure out how to do that someday.

/u/Riamu115, a user on reddit, took some modern day Calgary photos based on some rad historical Calgary photos, then shared up to the /r/Calgary subreddit. With permission from OP, here they all are laid out on a single page.

A Look At Stephen Avenue/8th Avenue – Then and Now 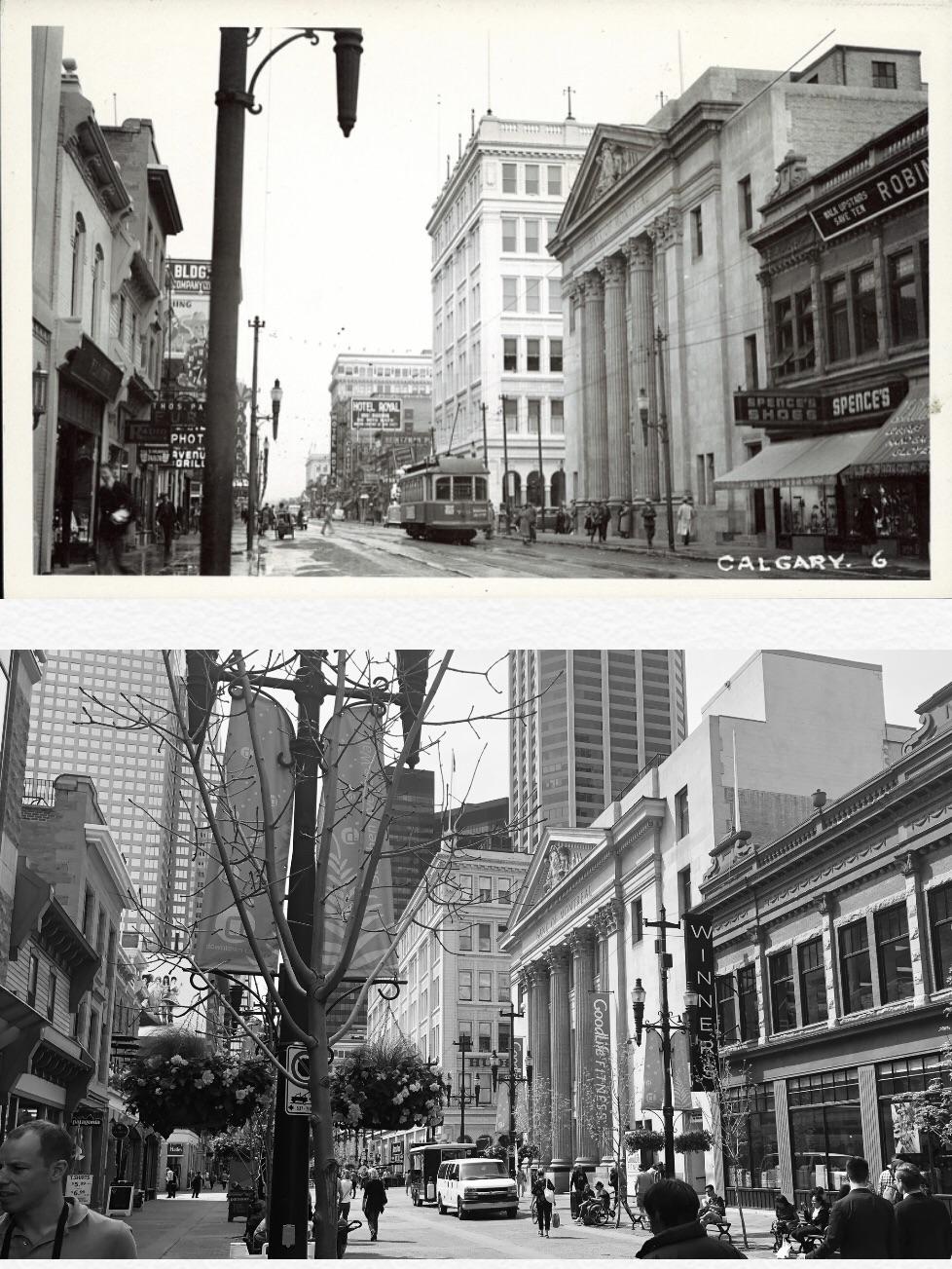 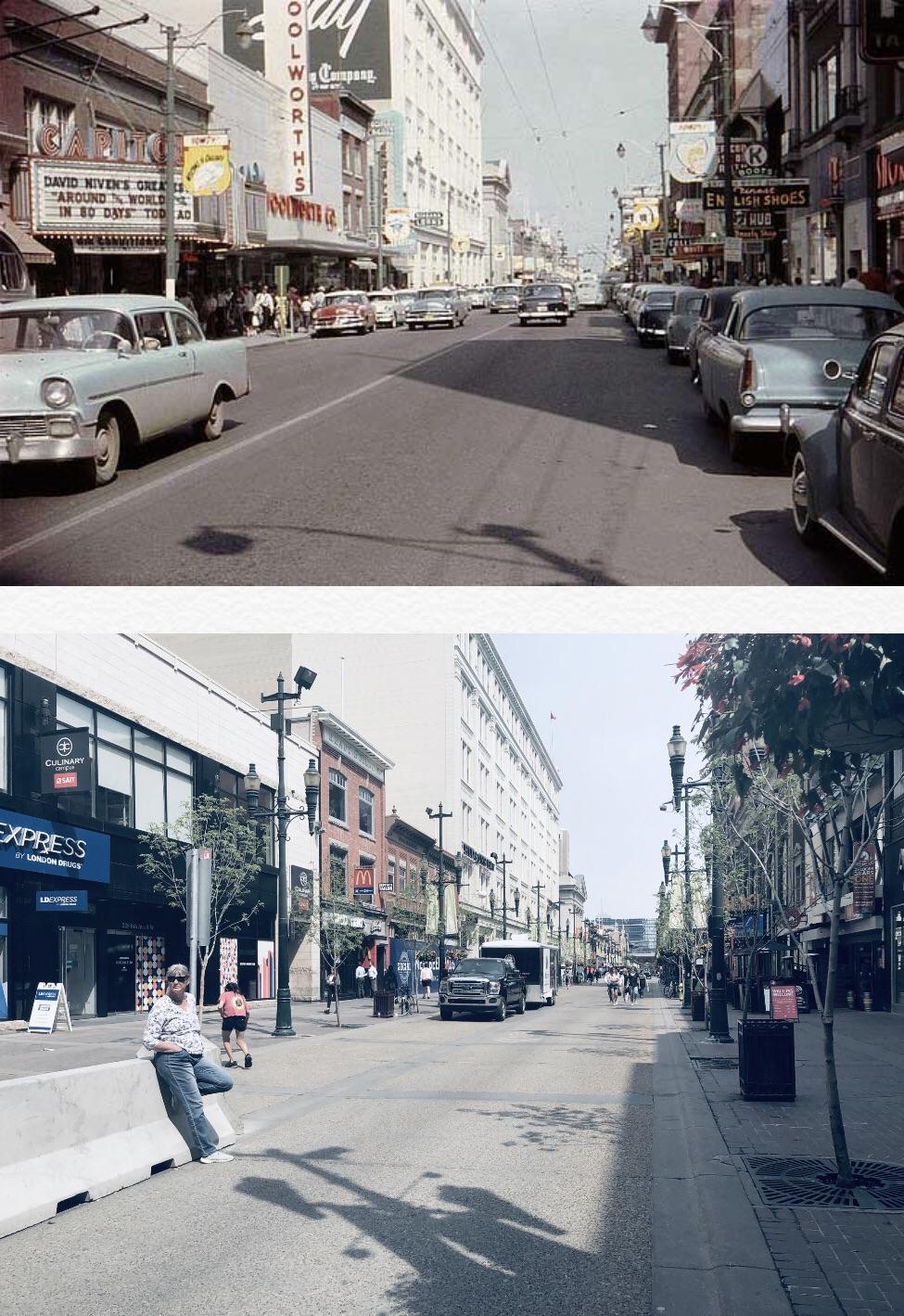 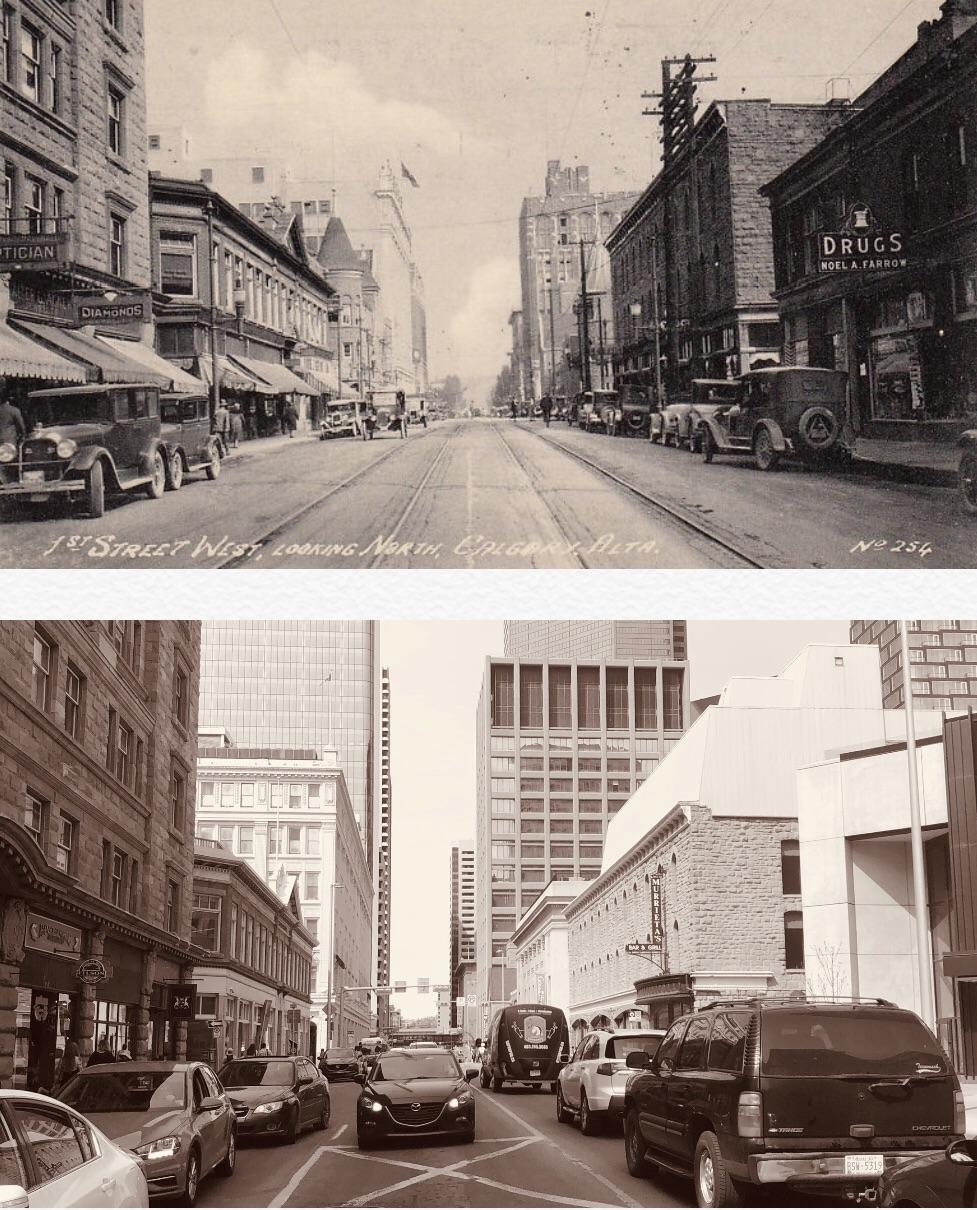 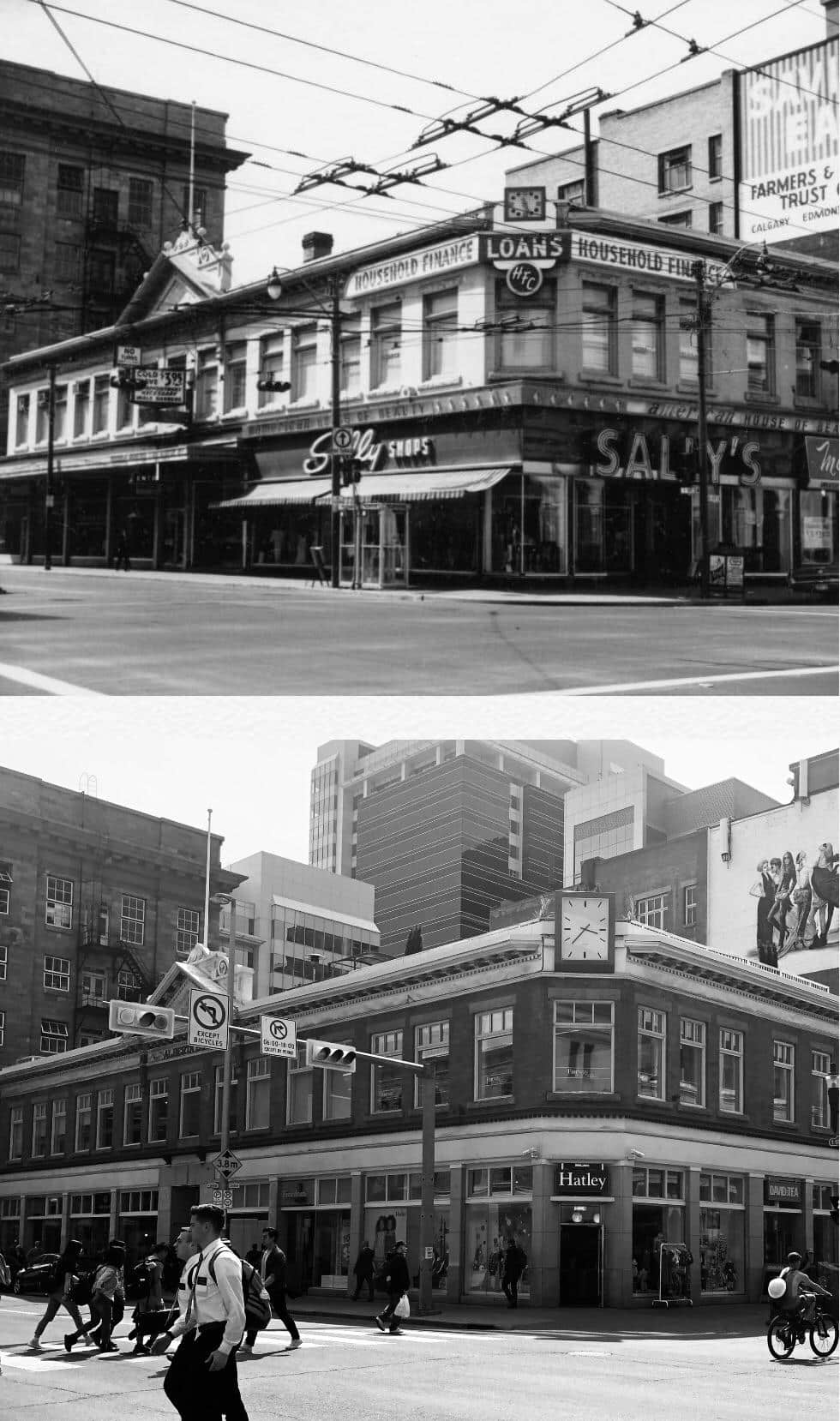 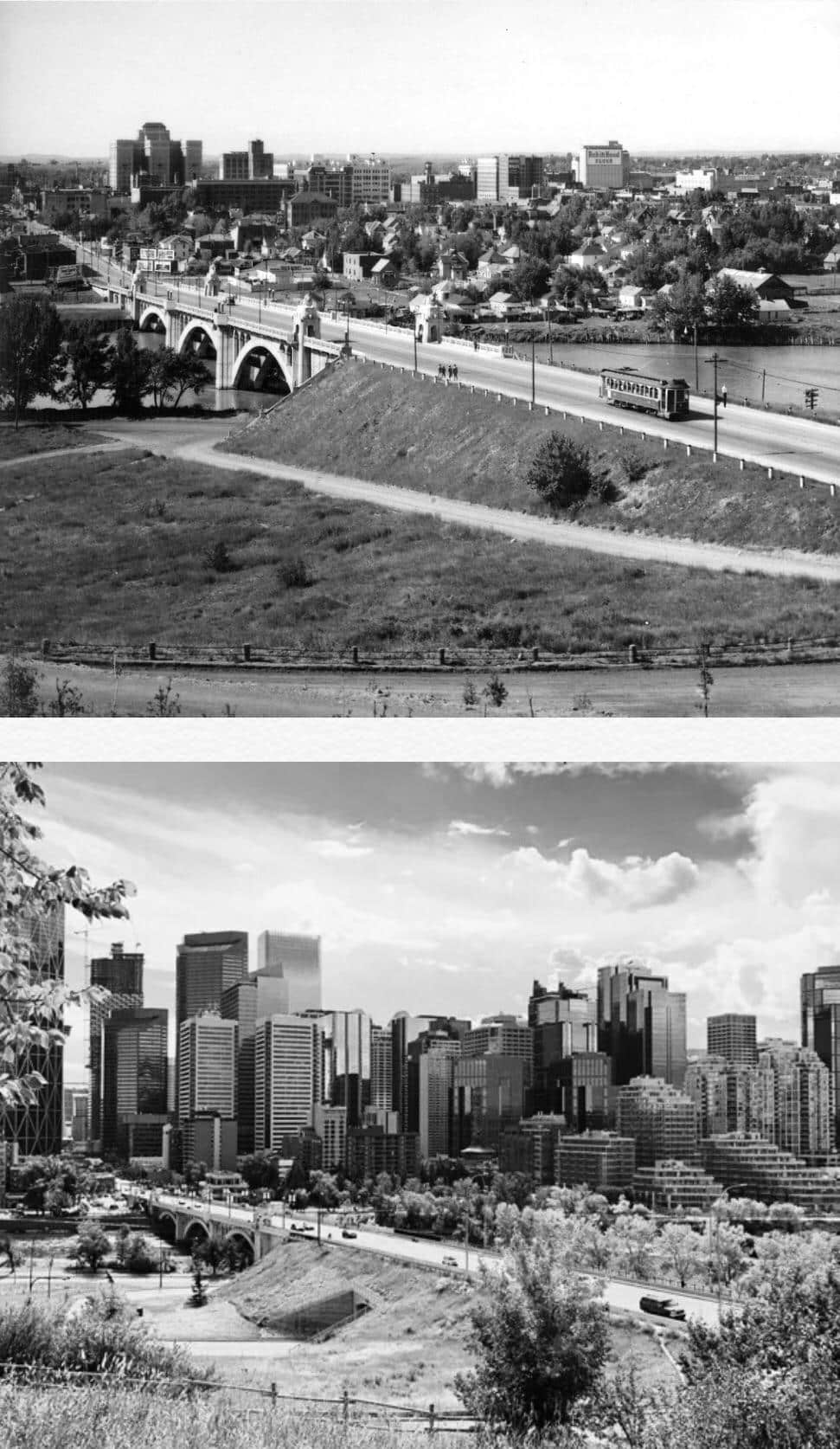 The below excerpt is from this book, which I recently picked up at the Hillhurst Sunnyside flea market! It’s written by a local super knowledgable historian dude Harry Sanders. Posted with permission! He regularly shares all sorts of locally relevant and interesting things online, and even speaks at events and stuff.

When the Central Methodist Church was gutted by fire on February 29, 1916, Calgary Herald photographer William J. Oliver did not have to step outside to take a spectacular photograph of the blaze. The Southam Building, which stood directly north of the church from 1913 until it was demolished in 1972, housed the Herald offices from 1913-32, and Oliver had only to open the window to get his shot.

The “mother church” of Calgary’s Methodist congregations originated in 1875 as Reverend John McDougall’s Calgary Methodist Church, and its congregants eventually included Senator James A. Lougheed, Prime Minister R. B. Bennett, and mayors W. H. Cushing and Fred E. Osborne. Rev. George W. Kerby served as its minister from 1902-10 when he resigned to become principal of the new Mount Royal College. Lady Belle Lougheed laid the cornerstone for this Gothic-influenced building in May 1904, and the rusticated sandstone church was dedicated in February 1905. After the fire, it reopened in April 1917 with a new Casavant organ installed. It joined the United Church of Canada in 1925 as Central United Church. Additions built in 1948 and 1952 did not compromise its his toric appearance, but two Modern entrances built in the mid-1950 did. Before the incongruous corner entrance was removed in 1996, it covered half of the cornerstone.

Also check out this Facebook group, if you use Facebook. All sorts of local history and knowledge regularly gets shared here.

This has been a fun walk down memory lane (well, not exactly memory lane, we weren’t around in the 1800s).

Thanks again to /u/Riamu115 (you can follow him at @liams_utsukushii_art on Instagram) and Harry Sanders for permission.

Guide to the Calgary Lilac Festival

1 thought on “Historical Calgary vs Current Calgary in Photos!”