It was pretty friggen hot yesterday (25C), so I waited until later in the evening to check it out. Headed down at around 8pm to take some photos and see what I could see.

Below are almost photos! Click on them to expand. Took with my cell phone, a Nexus5x, then touched up a little bit in Snapseed. 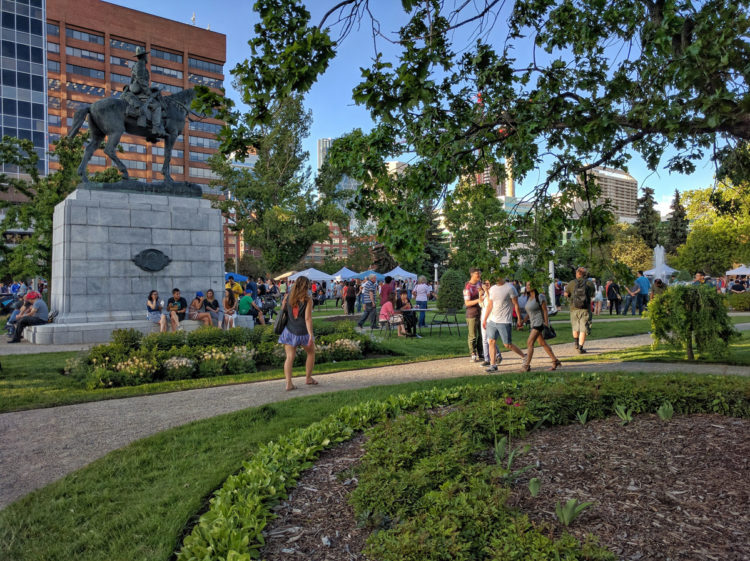 It was really really, really nice outside. 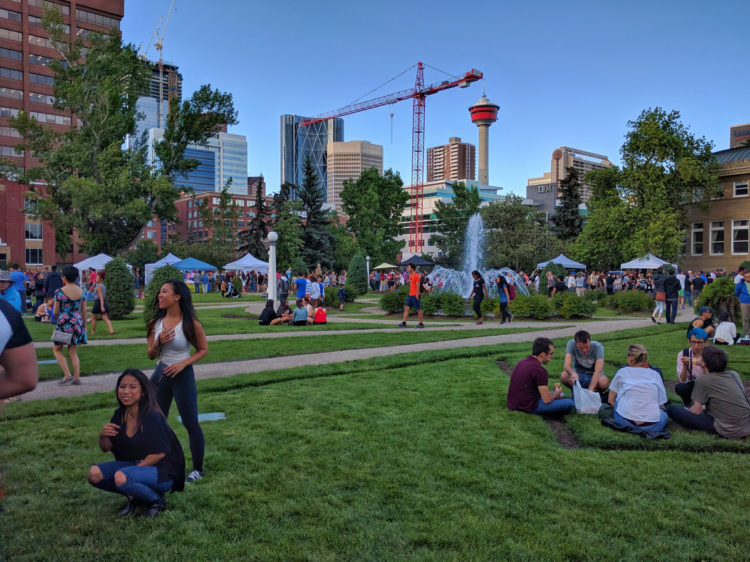 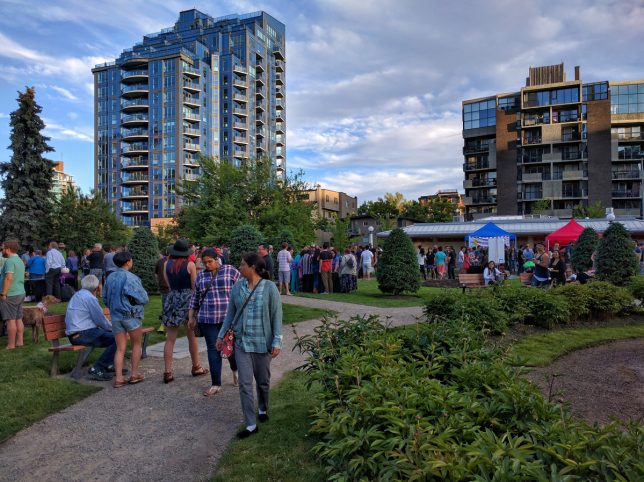 There were something like 20-25 various tables setup for people to sell their handmade goods, ranging from buttons and pins, to clothing, jewelry, face painting, ornaments, soap, pretty much the typical stuff you’d expect at this type of market. The majority of things sold were jewelry and clothing. I’m sure they’ll bring on additional vendors for the next events, if you didn’t see something that tickled your fancy. 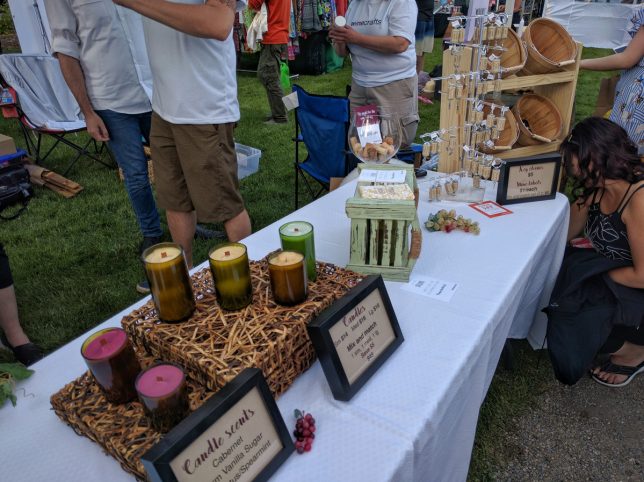 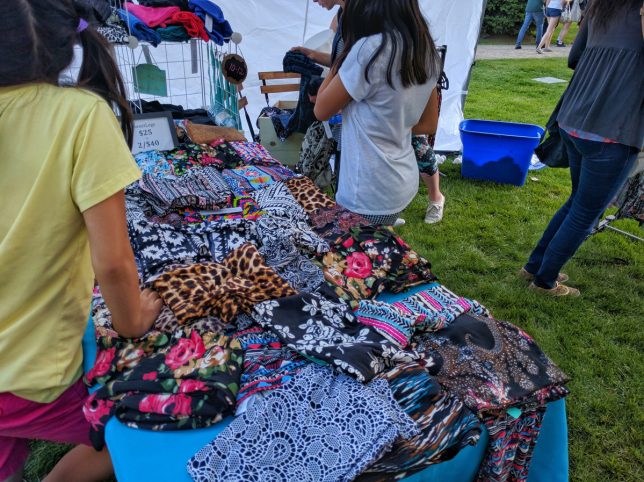 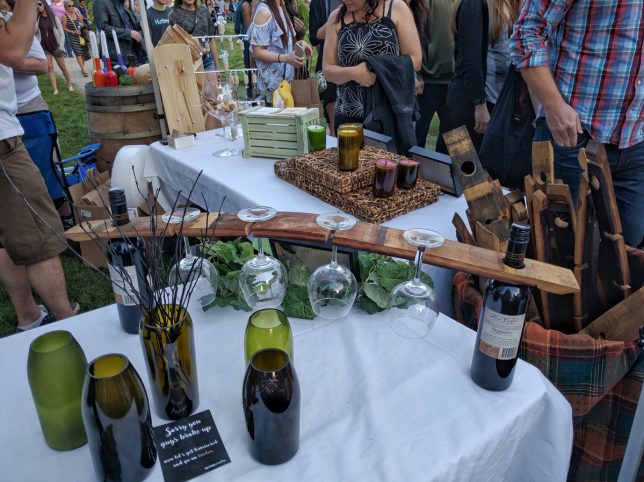 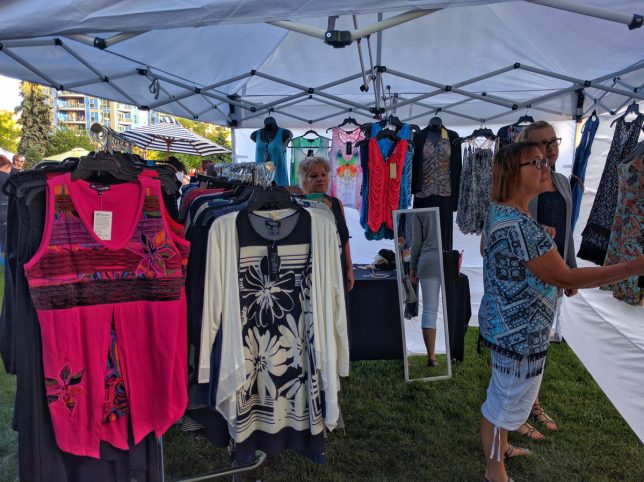 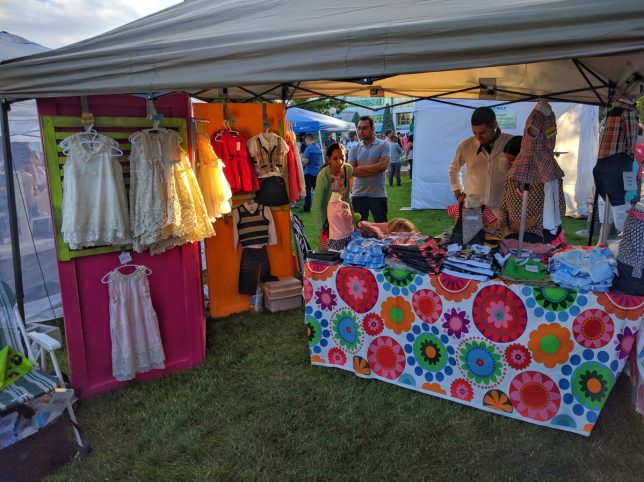 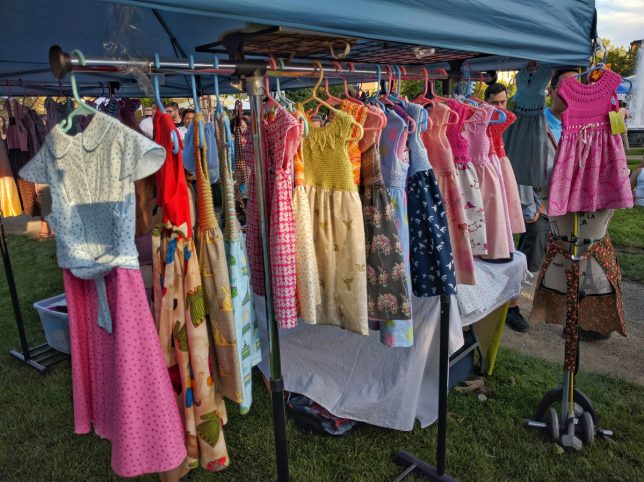 Debit was not available anywhere I saw, however most of them seemed credit card capable, using Square. Of course cash was also accepted. No word on Bitcoin 😛

The vendors had both tents and tables. The tents seemed to get the most attention from people, and some protection from the wind. I did see some table vendors struggle a bit with wind blowing over their stuff, but thankfully it wasn’t too bad. It was sometimes difficult to even see what a tent had for sale as things got pretty cramped within the tent walls. The tables did not have this problem. 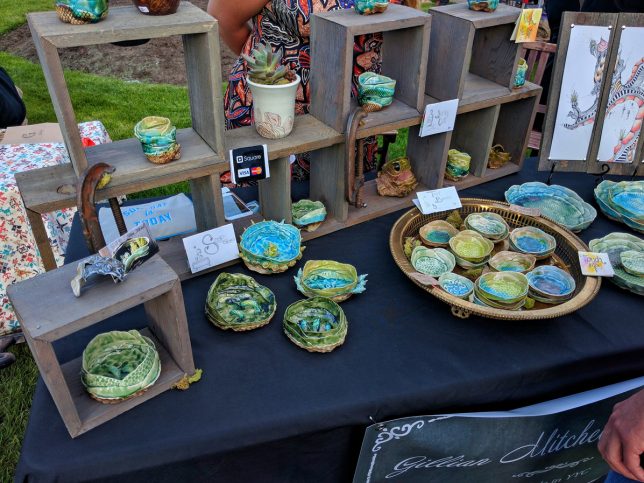 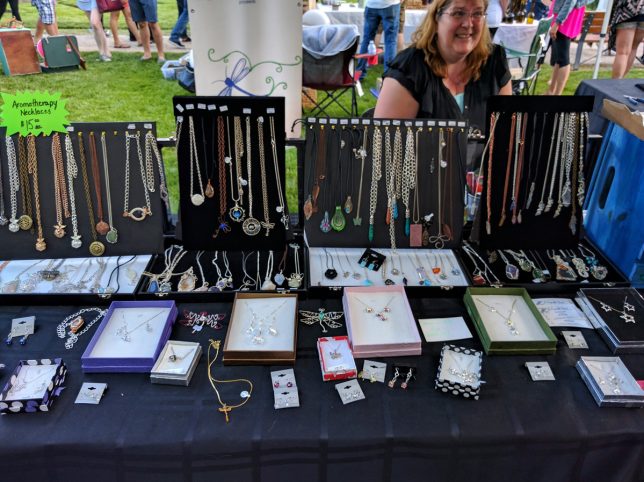 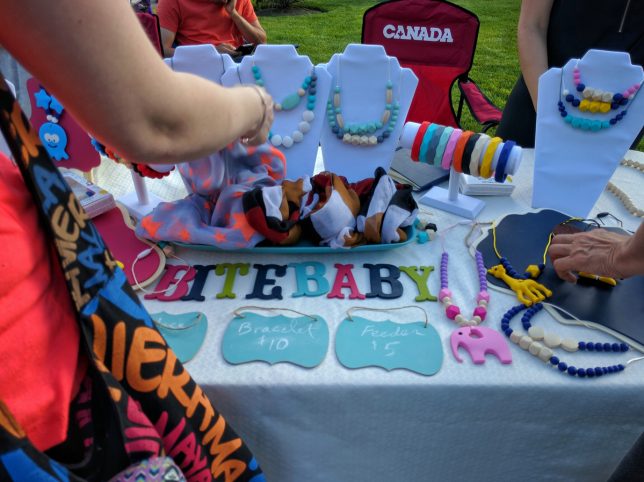 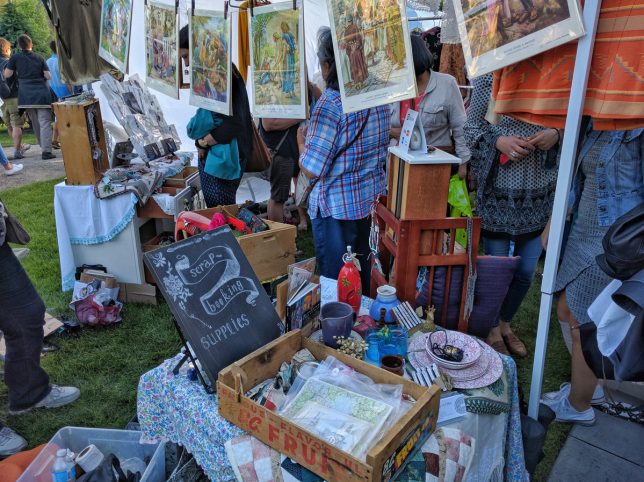 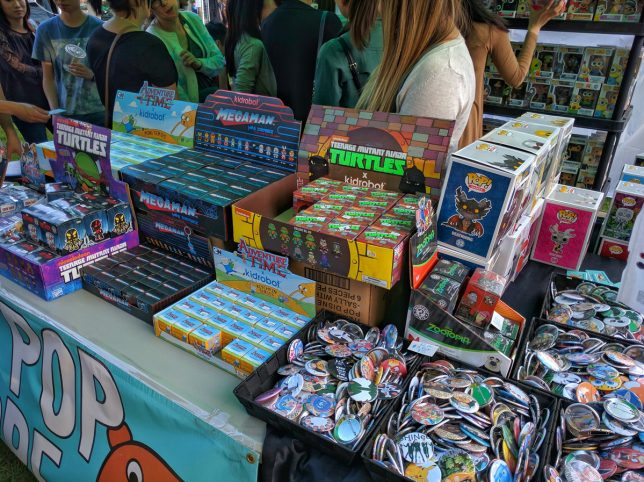 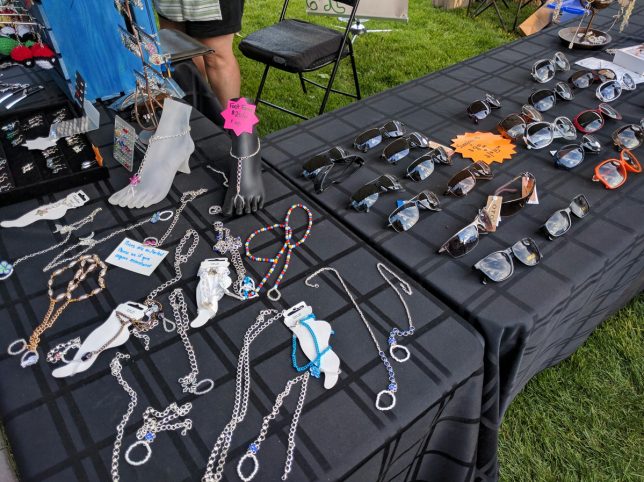 Central Memorial park has pathways that loop around the grounds, so the tents were a stationed mainly around that. People mostly kept to the path when checking things out. Slow zombie shuffling trains of people, in both directions at the same time.

They could have absolutely squeezed in more tables, but I’m guessing that’ll also come as the event gets more notice and mention throughout the summer.

As I had arrived late, the food situation was bleak. There was one foodtruck (I think it was Perogy boys? Didn’t take a picture, can’t remember), and 2 or 3 food tents.

There are restrictions on the amount of food trucks you can bring to an event like this, depending on a number of various factors, probably why there was only one foodtruck. 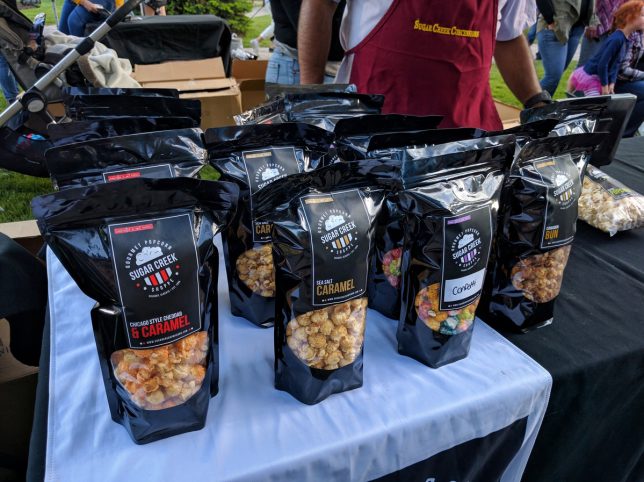 One of the food tents was closed down entirely, guess they ran out of food? The lines the for the food were 20-30 people deep. Not even sure what the food was, couldn’t get close. Other than the remaining food tents, there was gourmet popcorn and snacks at a couple tents.

There were no beer gardens at the Calgary night market. Not that type of event.

Luckily there’s a bunch of restaurants in Calgary, many downtown, so if anyone was starving and not able to get tent food, they didn’t have to go far. Stephen avenue was crazy patio busy!

I hope for the next Calgary night market, they add a couple more food barons to meet demand. If you know someone that can do that, shoot them an email.

The Calgary Night Market in Conclusion

I have been to many many events like this, and this one was pretty good. The food situation above was the only hiccup I noticed. People were having a good time, lots of children and dogs, plenty of families came out. Parking looked to be a little bit of a nightmare, but I don’t drive so I’m not sure how bad it actually was. Plenty of parking downtown, just need to know where to find it.

I did see some people complaining on reddit and Facebook about their experience at the Calgary Night Market, but overall it was well received I think. Perhaps some people have different expectations on what to expect at a market… but who knows. Admission was free.

The only other thing I could suggest are some dog water stations. So many dogs, and it was really hot, some of them looked pretty parched. Even though they have water fountains there, I don’t think dogs are supposed to go in? Can they drink from it? No idea. Never had a dog, actually!

I guess the Calgary Night Market was technically not at ‘night’ either. Sure sounds better than the Calgary Late Afternoon to Evening Market though.

When will the Calgary Night Market be back?