What Is The Peace Bridge

The Peace Bridge is a pedestrian/cyclist bridge that extends from the south side of the Bow River, to the north side, right beside Prince’s Island Park, connecting the pathways on either side of the river. The bridge itself looks like a giant Chinese finger trap, which is quite striking when you see it in person. The Peace Bridge is open to foot traffic and cyclists, often being used as a backdrop for wedding photos or selfies, and occasionally ticketed events. The Peace Bridge is a very popular destination for Calgarians and tourists. Even though the Peace Bridge is a relative newcomer to Calgary, it’s quickly becoming one of our most iconic landmarks.

The Peace Bridge has separate lanes too, for pedestrians and cyclists. The pedestrian sidewalks are on either side of the bridge, with the middle lanes meant for people on bikes and e-scooters.

Where Is It Located

The Peace Bridge is located just outside the downtown Calgary core, to the west of Eau Claire/Prince’s Island Park.

The Peace Bridge first opened to the public in March of 2012, to a bit of a mixed reaction from Calgarians. It was designed by Spanish architect Santiago Calatrava and the final costs came in at around $25 million. The bridge is open 24/7 (unless it’s being repaired) and it has excellent lighting at night.

Breakfast on the Bridge Event

Every two years an event called Breakfast on the Bridge is held on the Peace Bridge, on June 20th at 5:21 AM to celebrate the 70th Anniversary of the Liberation of Holland. Sun, rain, snow or shine guests enjoy a hot breakfast on the bridge while vintage airplanes fly overhead, accompanied by army band music. Tickets are $1000.

The Peace Bridge is a must-see for anyone visiting the city, just for the views and photo opportunities of it, and from it. There is no other bridge like it in the world. On the south side of the bridge you’ll find lots of seating and places to find shade, plus lots of grassy areas along the Bow River Pathway. During the warm weather, the area is almost always full of people during the day, and less so but still pretty busy in the evenings. 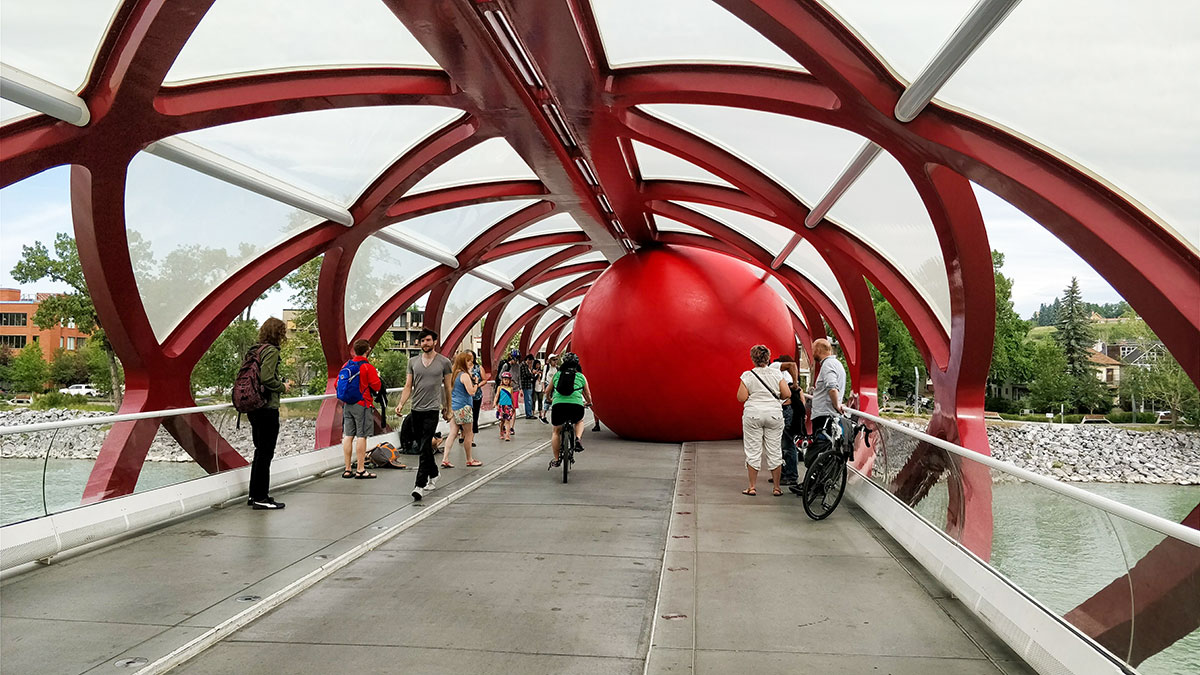 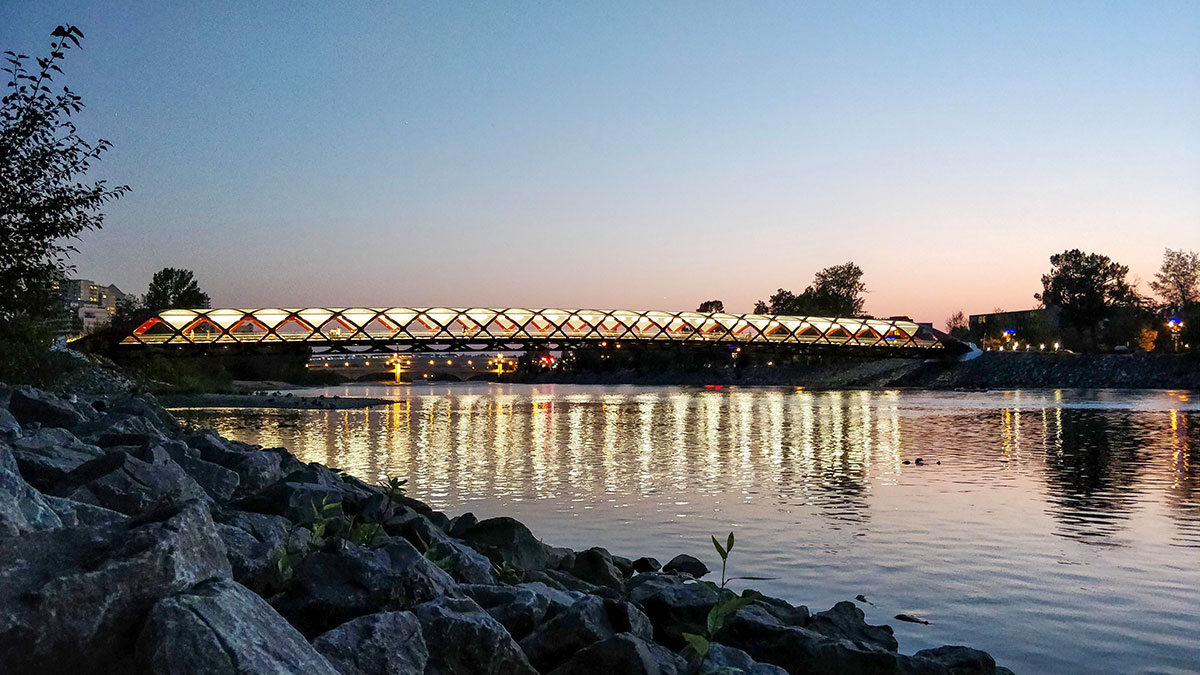 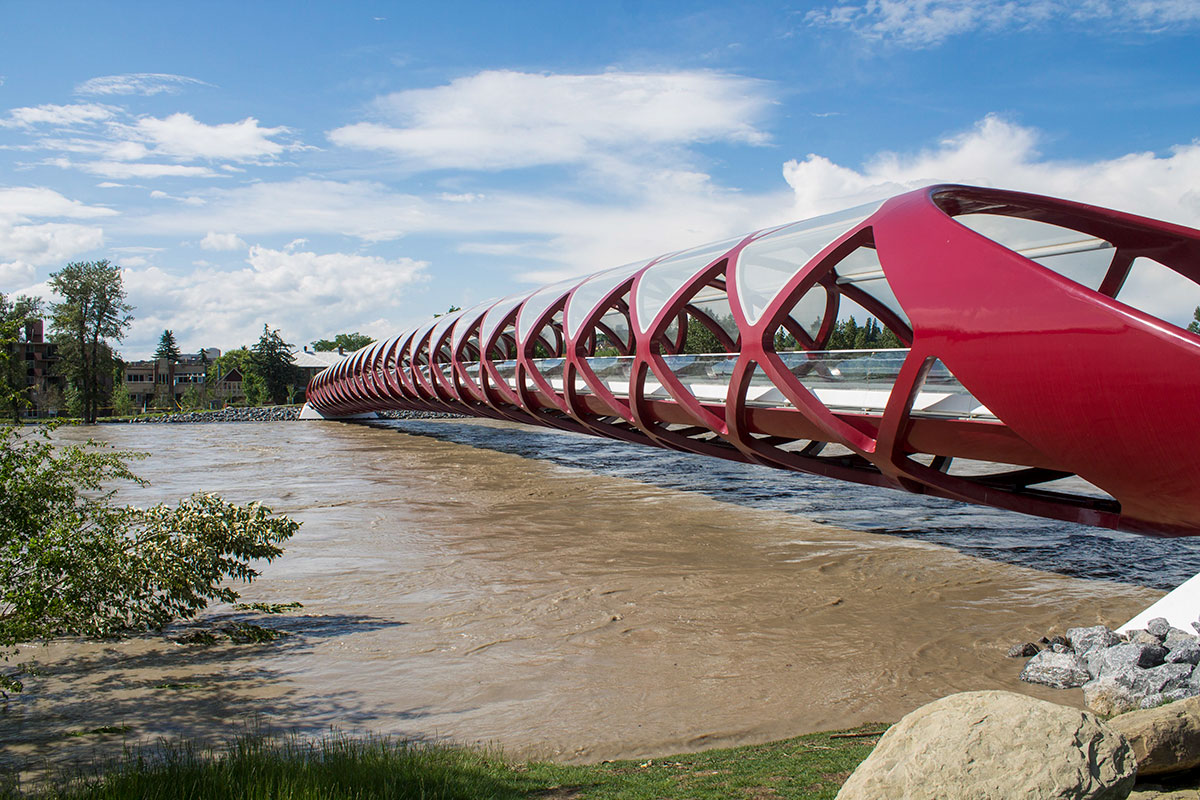 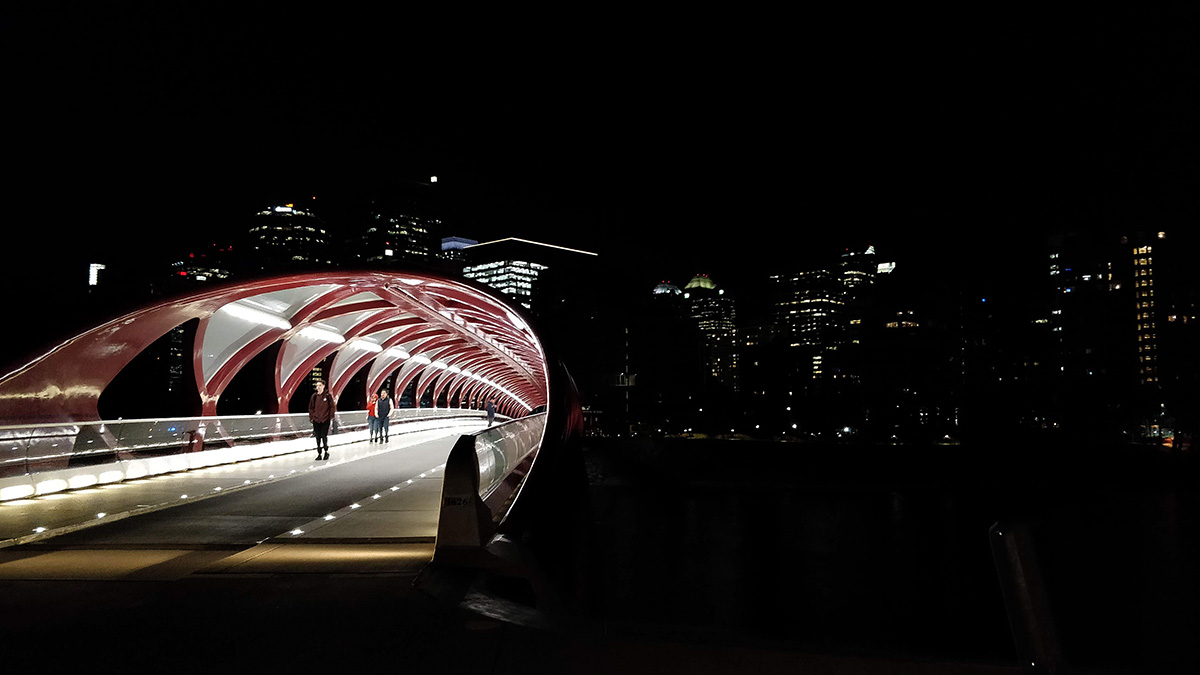 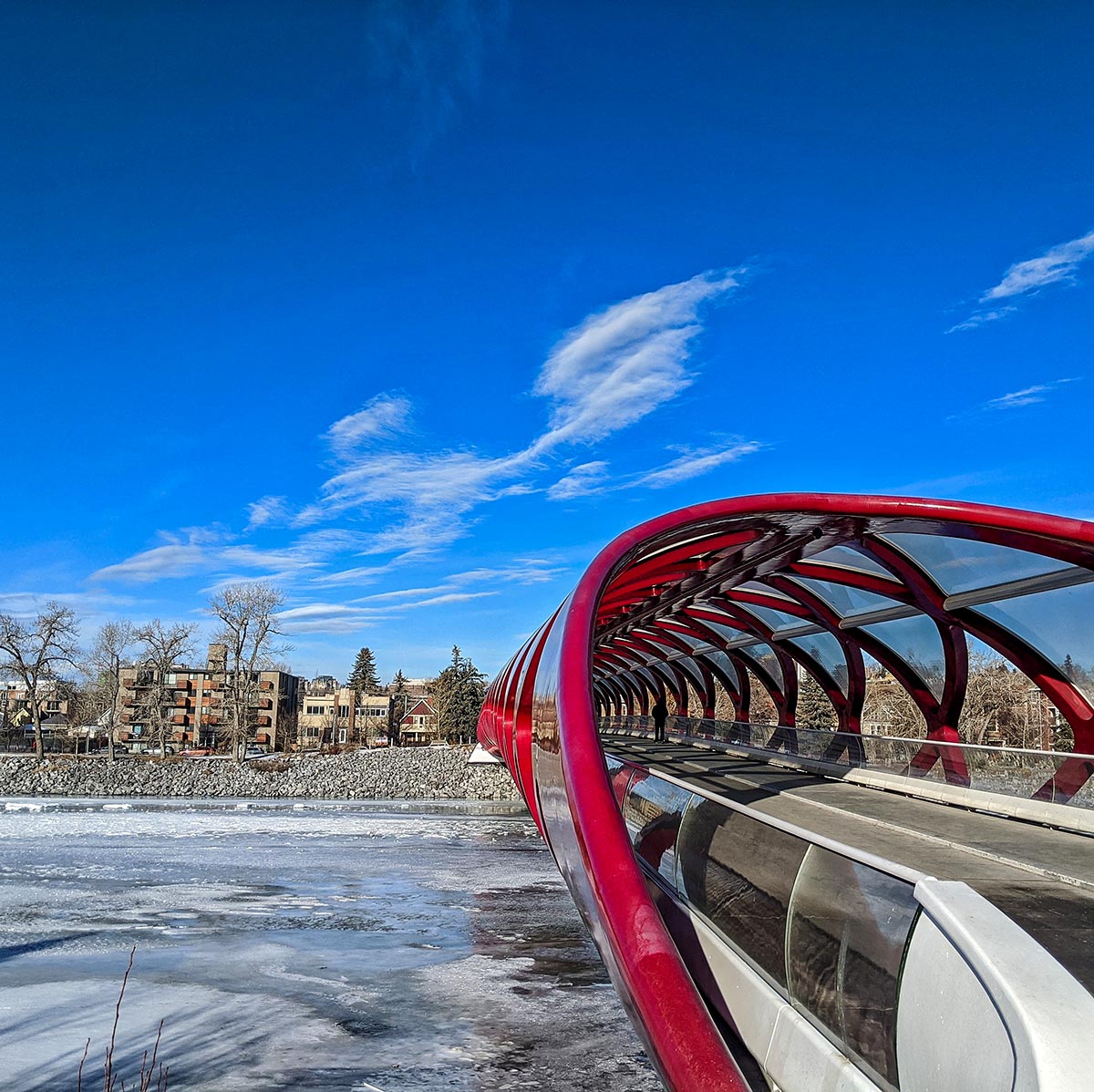 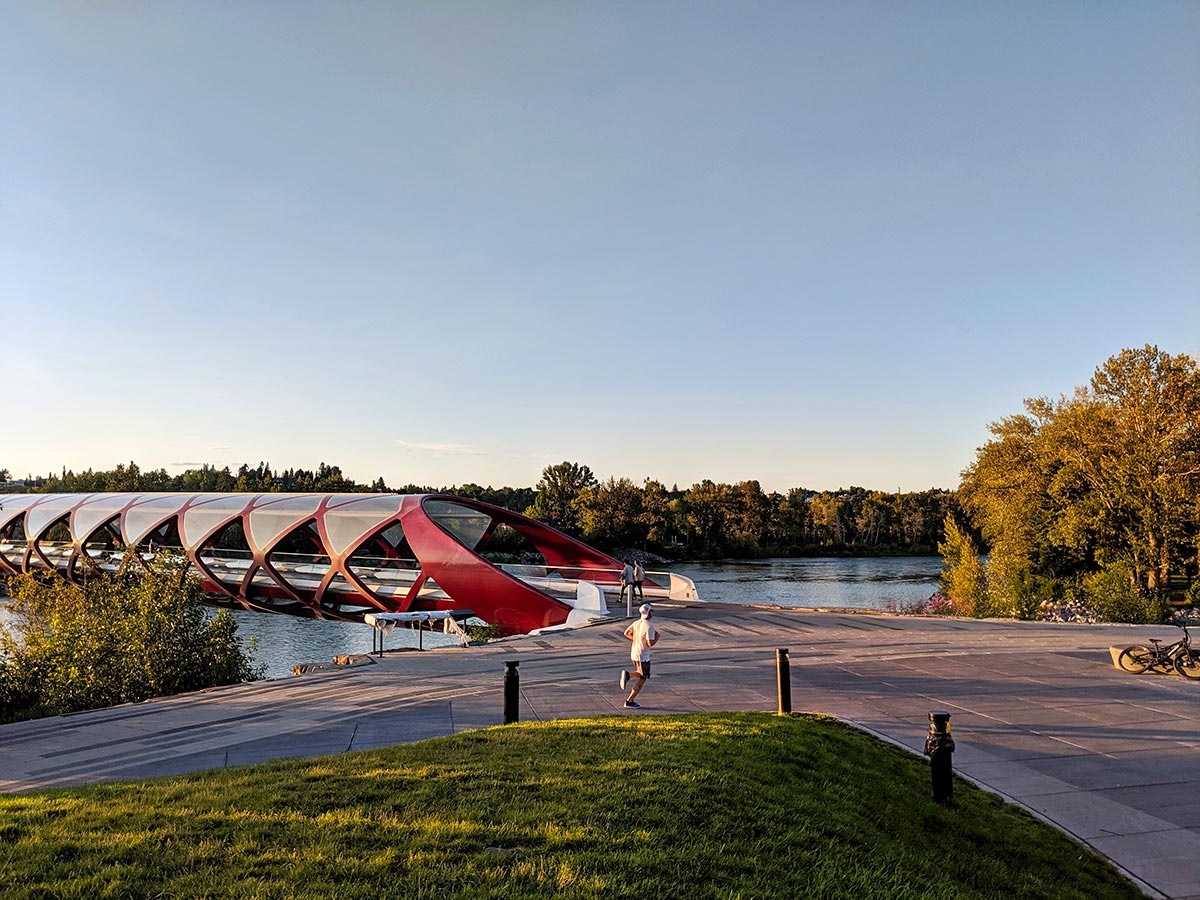 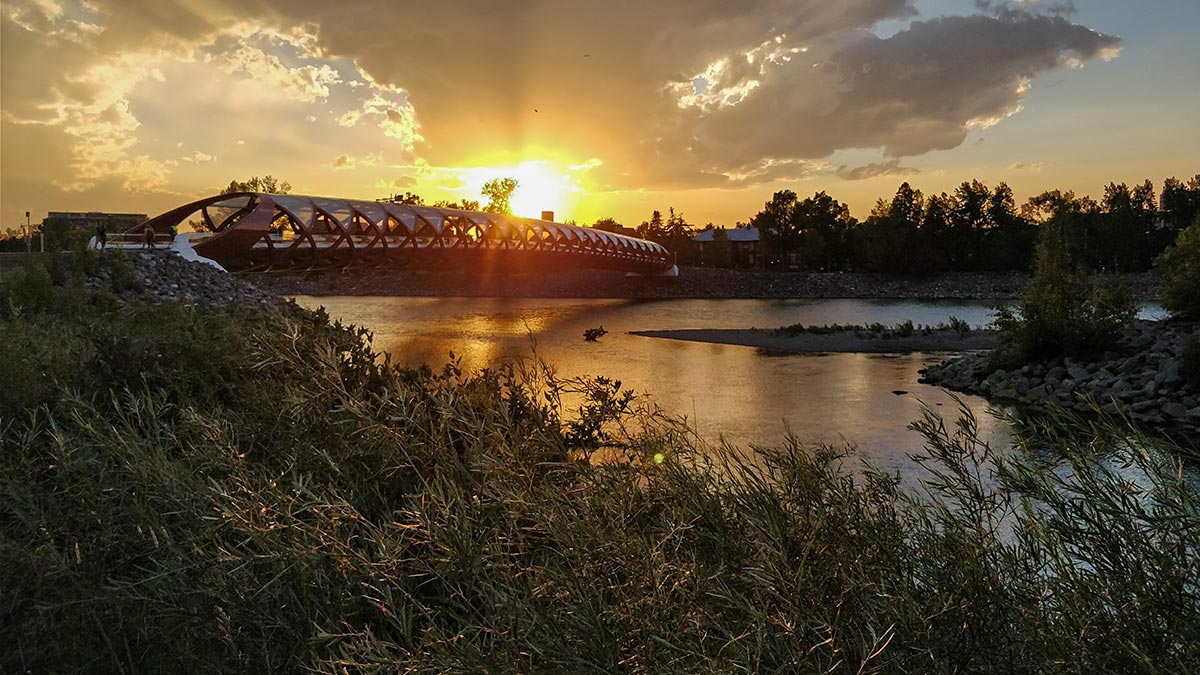 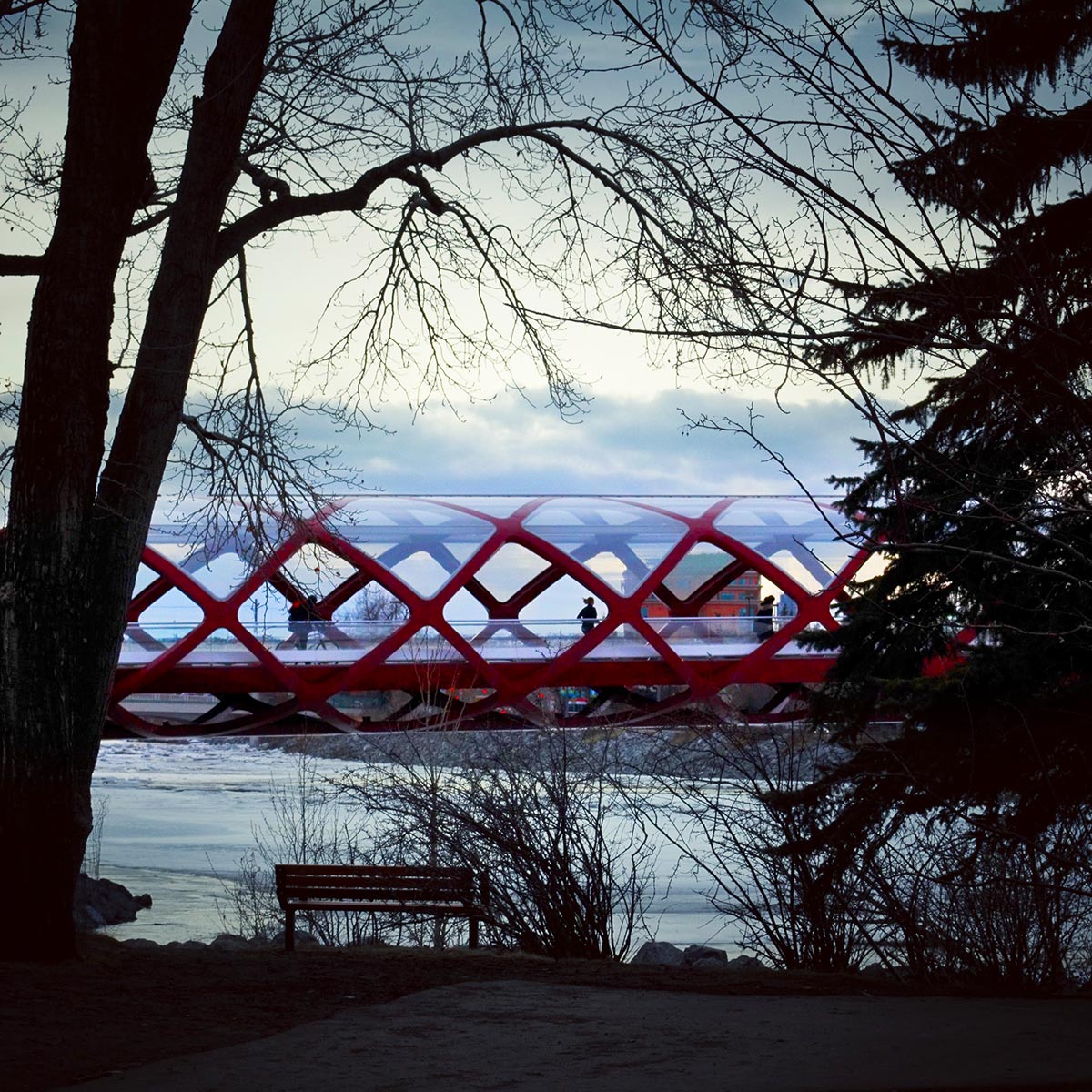 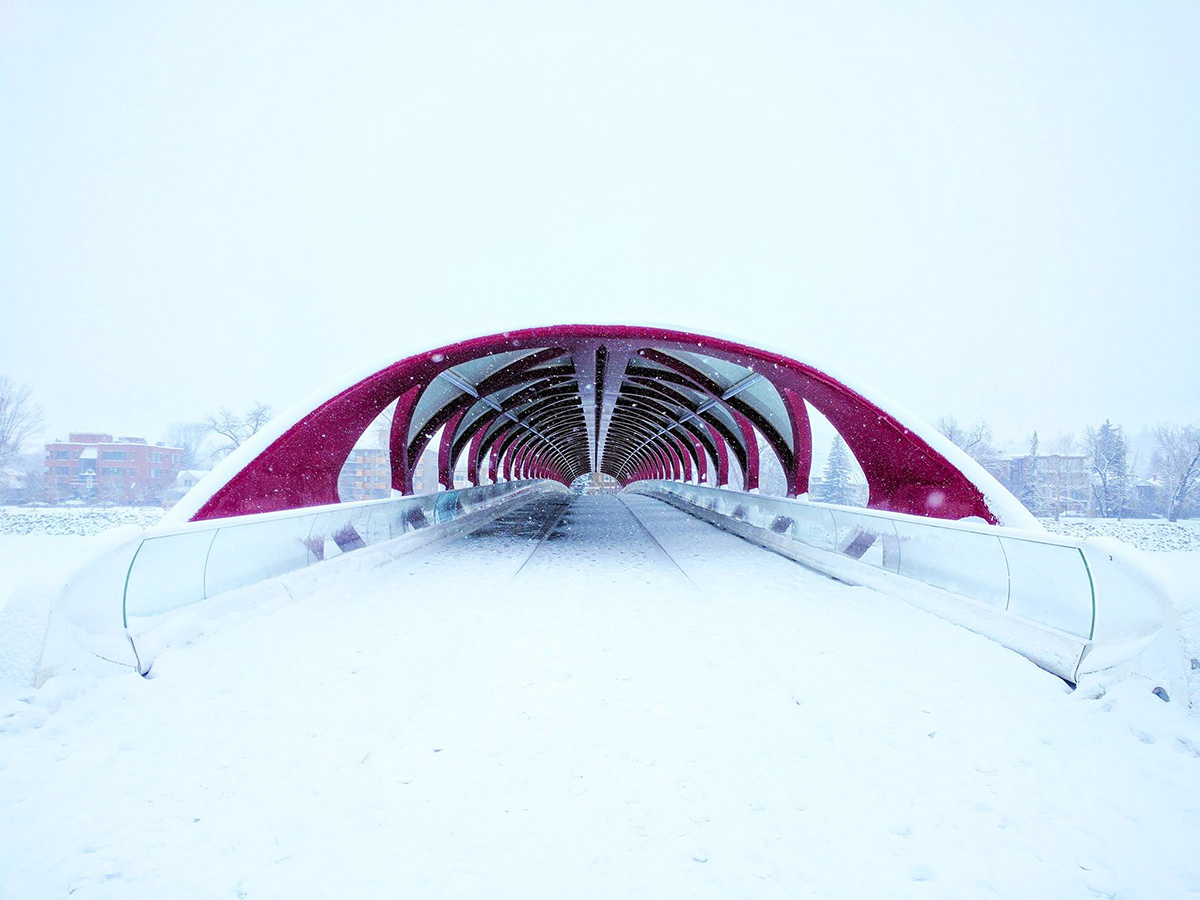 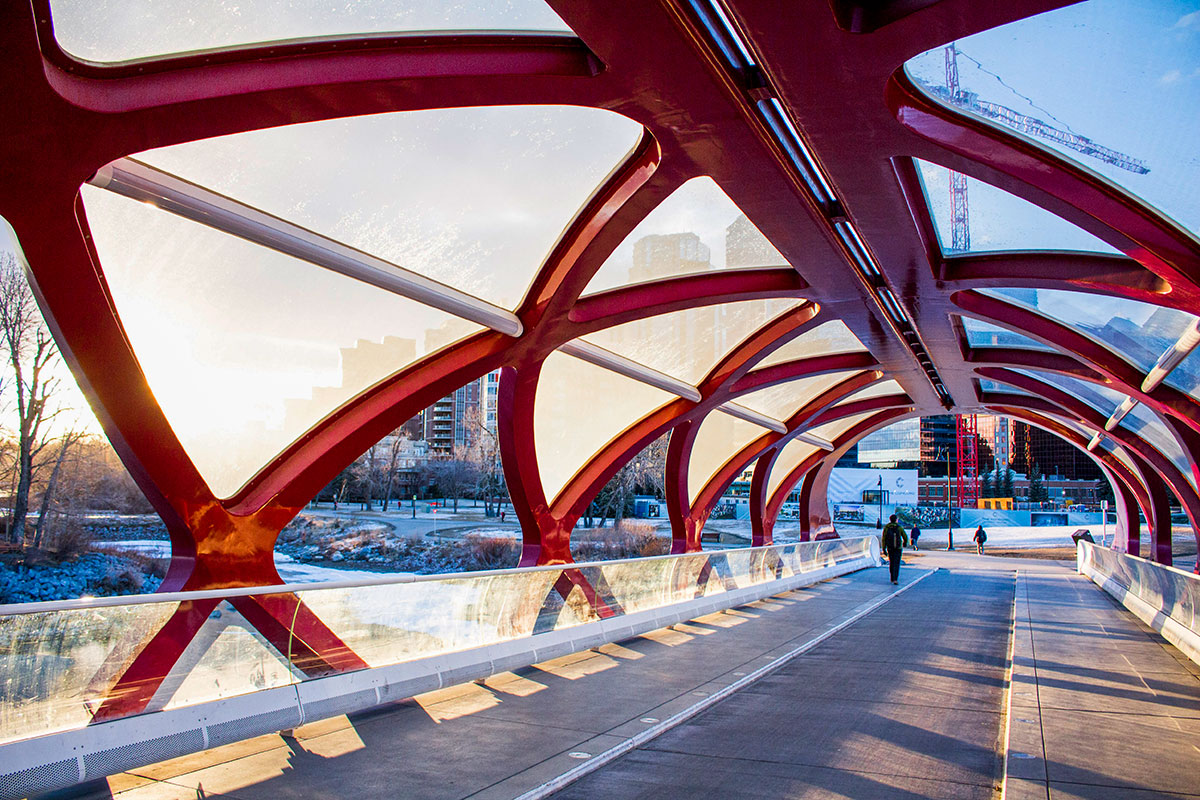 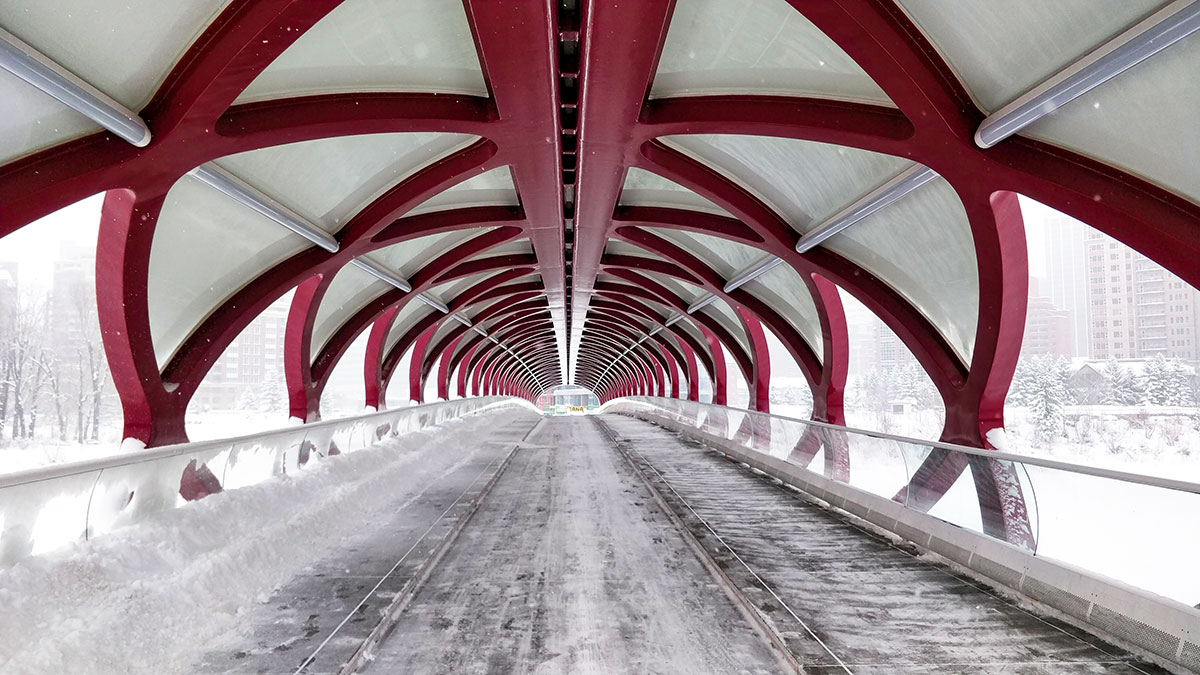 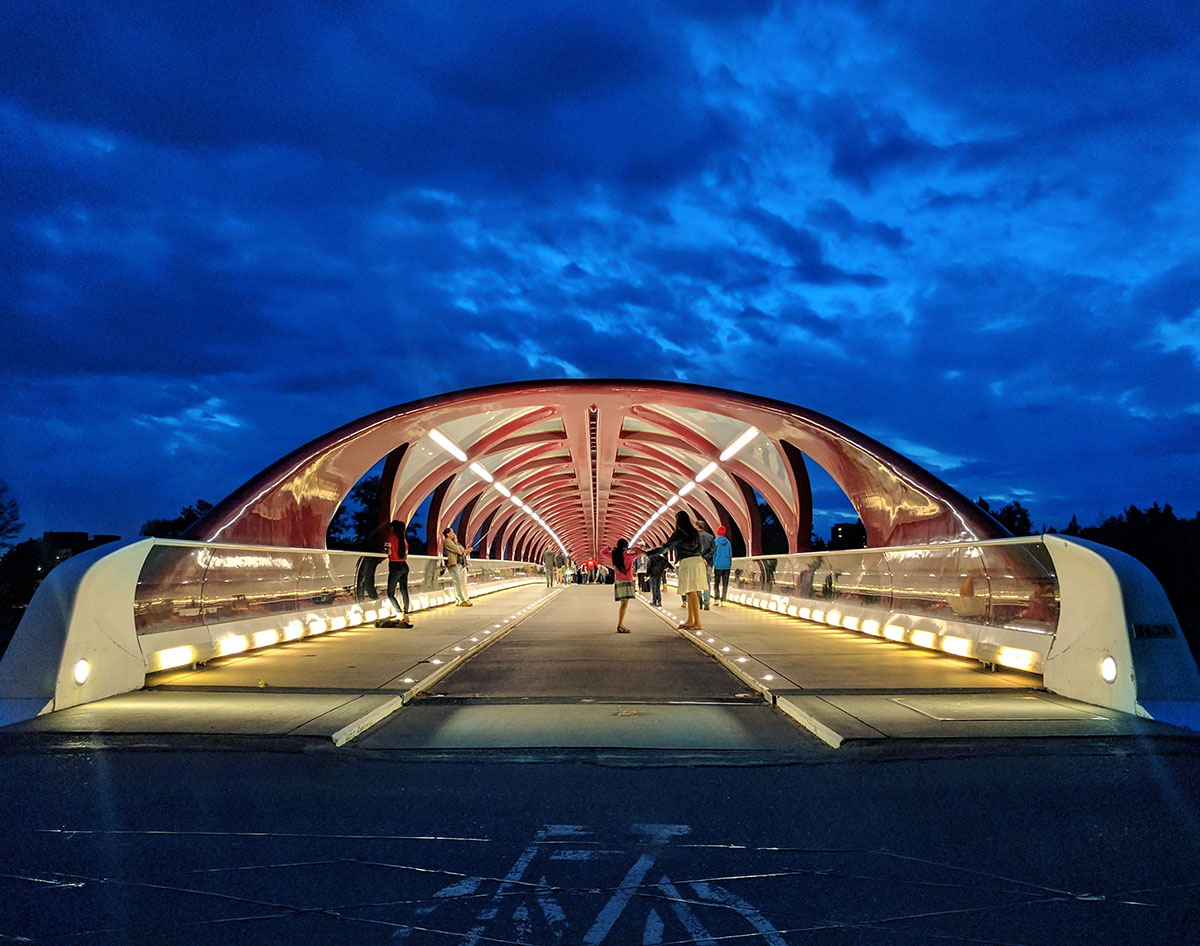 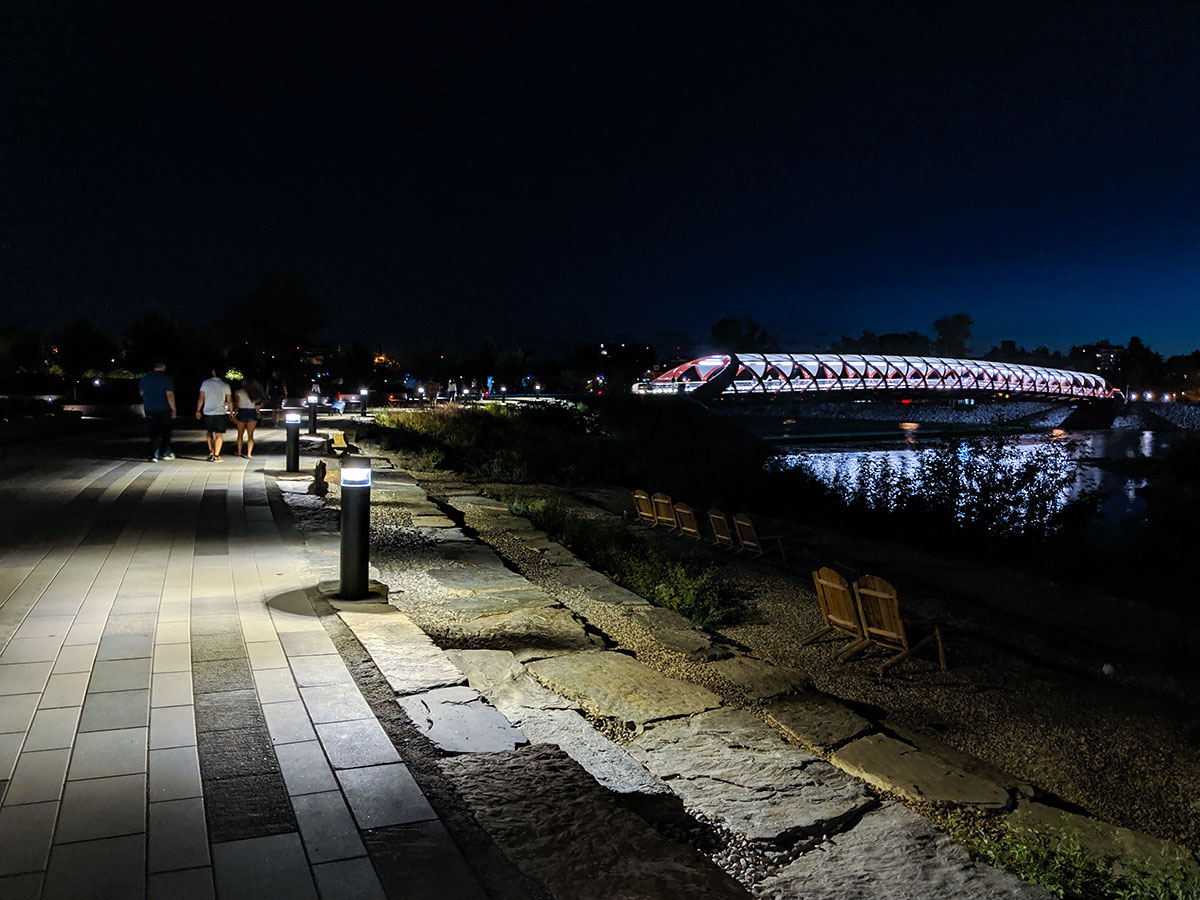 The Peace Bridge, although costing a lot of money, we feel is a wonderful addition to our city and we personally love it. 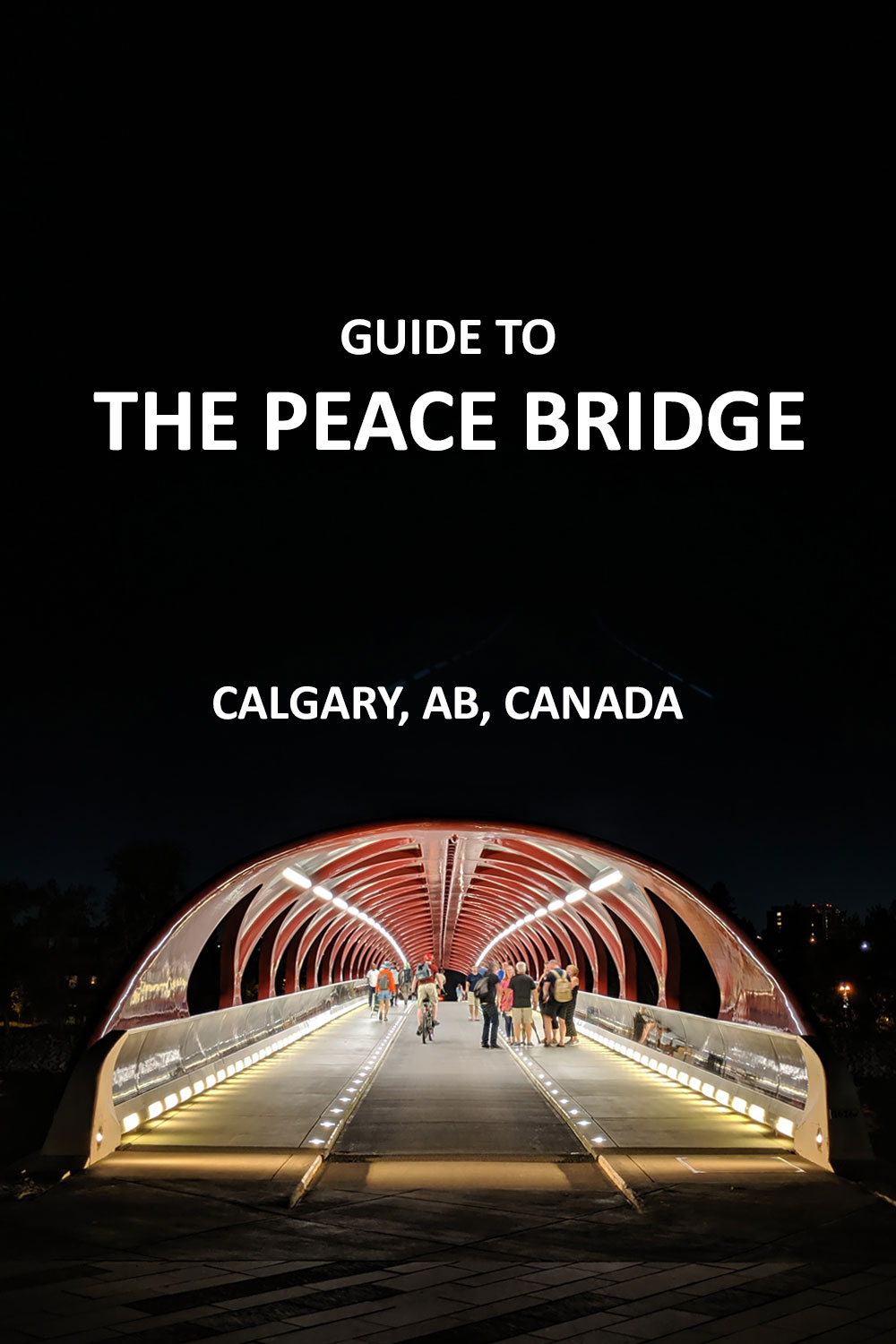